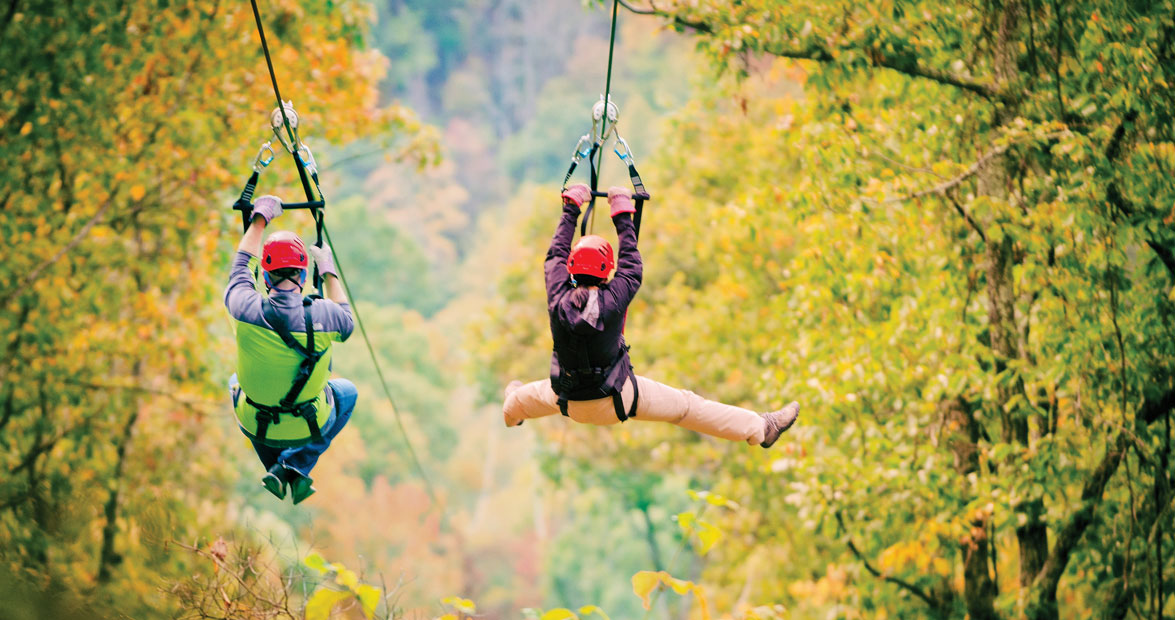 You’re held from behind on the steep slant leading down the platform, and if you’re short, the harness gives you a wedgie. With 35 pounds of hardware around your thighs, waist, and chest, it’s a little like being Hannibal Lecter secured with chains. In a good way.

Plant your (closed-toe) shoes on a rectangle of vertical, trampoline-like mesh, which is the only thing between you — a heavier-than-usual you, what with all the gear — and a deep, wooded cove far beneath you. Wearing thick work gloves, the kind you’d wear to stack firewood or shuck oysters, grasp tightly to the bar above your head. Ready? You’re ready. Good, because behind you, someone throttles back a lever that you failed to notice as you made your way onto the platform, but that sounds like every trapdoor scene you’ve ever watched in Indiana Jones movies. Ka-thunk. The supporting mesh drops away. You’re a goner.

Everything at Navitat Canopy Adventures is constructed on a slope. To begin with, the outfit is located on a mountainside outside Barnardsville. The slanted, graveled entrance passes signs that say DRIVE SLOW, ZIP FAST. A steeply-angled roof crowns the main building where you check in and waiver your life away just as you realize that the rubber mat you’re standing on is surreptitiously weighing you. The assistant relieves me of everything in my pockets, and my scarf, which I’m happy to hand over, as I’m not interested in going the way of Isadora Duncan. (And in these days, when you can’t even eat a slice of Brie if you’re pregnant, it probably goes without saying that you also can’t be with child while freewheeling down a steel cable over treetops.)

Another short climb up another hill, and you’re in a concrete bunker-type structure, where a couple of Navitat’s 50 guides have neatly laid out your full-body harness. Just step in, and entrust the hooks and buckles and belts and carabiners to the guide. What have you got to lose?

Navitat opened in 2010. Its 10 owners, seven of whom are family members, all with active lifestyles, searched for “a spectacular piece of land within 30 minutes of Asheville,” according to Abby Burt, an owner and marketing leader with Navitat (a term they coined by combining “navigate” and “habitat”). More than 300 properties were researched and rejected before the owners found Moody Cove. Navitat has a 25-year lease on property that has been owned since the Civil War by the Charles McDarris family of Raleigh. The family was eager to regather and repurchase parcels of their family’s land, and equally keen to rent it out, since one of Navitat’s missions is not only to have minimum impact on their leased land, but also to improve it. The company works to manage and eradicate exotic invasive species, and actively treats eastern hemlock trees for hemlock woolly adelgid, the aphids bent on destroying them. One section is off-limits; someone from an earlier generation of McDarrises lost his wedding ring somewhere in the undergrowth, and his son still brings a metal detector to search for it.

The run-of-the-mill-looking white van that ferries gliders to the launch is anything but, chewing up hairpin curves on an otherwise nearly perpendicular climb up dirt roads. A short hike (yep, still upward), and then you see it. Actually, you won’t see it, but your guide will: the well-hidden wooden launch pad, jutting from the mountainside, supported by concrete “anchors” that have been drilled 40 to 60 feet into the earth. Branches form the handrails for a one-lane split-log bridge to reach the platform. There, in technical terms, you’re attached by “a dual-point lanyard system to a trolley along with a lanyard and ladder clip backup.” What I see is dangling hardware, cables slender as spider web filaments that simply look too, well,
simple to support a human being.

“You can go faster if you pull your knees closer to your chest,” the guide suggests, prompting this thought: Why would I want to ball up, to speed up? “Hollering is encouraged.” She grins. “Who wants to go first?”

I point somewhere in the 360-degree view of mountains, mountains, and nothing but mountains. “Is that Tennessee?” I ask. Stalling.

The ka-thunk gives way to a downward whoosh, a marvelous, nearly soundless soar over trees and forest deeps. This, sir, is no glide. Too much gravity — and no wings — is involved. The wind brings tears to my eyes, and I’m Aladdin, or Peter Pan above Neverland, or, better yet, Meryl Streep’s Isak Dinesen flying over Africa, though without Robert Redford’s company.

Yet the experience is something different from flying. The sensation is sensational, the steady, soft, white-noise whir overhead, the stomach-drop depths below. You want to yell, not “Geronimo!” but with absolute delight, a noise between a shout of glee and a yelp of laughter. “Wheeee” is too kid-like. It’s closer to “Whoaaa,” as in “Whoa, Nellie!” How terrific is this? Moving without working, free falling without falling, cruising over a picturesque cove at 30 miles an hour for 70 seconds, more than a minute of zip until the opposite platform comes into view and —

Wait. Now how did they say I’d stop? In cartoons, this sinking feeling would halt Wile E. Coyote in his tracks, and he’d drop like a stone into the canyon. Please do not let this be an animated cartoon, even if I do look like Atom Ant in this helmet.

Answer: and here it comes — “Don’t lock your elbows,” I vaguely remember being told on the other ridge — a thick, horizontal bolster attached to the cable, a thousand times denser than your grandmother’s bolster, that the guide has flung 10 feet out from the platform. There’s a definite, sudden stoppage, but nothing close to Wile E. Coyote’s headlong ramming.

Let’s do it again.

Navitat has two “experiences”: The Moody Cove Adventure, which is a tree-based tour using zips, bridges, and ladders, and the Blue Ridge Experience, which consists of only zip lines, crisscrossing ridge to ridge over various coves. Groups of eight normally make up a tour, which takes two to two-and-a-half hours, and on the busiest of days, 350 adventuresome souls — sometimes as old as 92 — will climb, zip, scale, whoosh, and whiz over the wilderness. And yes, someone makes safety checks of everything involved, from equipment to platforms. Every day.

“Here’s a vine that cleverly attaches itself to a sapling, so that as the tree grows, the vine has a natural, automatic support,” the guide points out on our way to the next platform. “This tree is sometimes called the ‘Charmin of the forest’ because its leaves are so soft.”

Right, right. Learning flora and fauna facts on the way to the next platform is all well and good and appreciated, but where’s the zip? Oh, there it is, a silvery, unobtrusive thread. “Look for the small pond beneath you on this one,” the guide says, but for those of us on the platform, it’s as much fun to watch the other zippers, so to speak, drop and disappear, to touch the overhead cables and feel the thrum of vibration. And then, when it’s your final turn, you want to make it last, prolong the m.p.z. — miles per zip — for every possible experience. So there’s that slight panic of quick, quick, which to do? Ball up, or shout out, or look down for the pond, or up at the sky, or —

No, no, to all that. Just close your eyes, hold on, and enjoy. This brief, spectacular soar; this quiet thrill; this whisper over the woods.