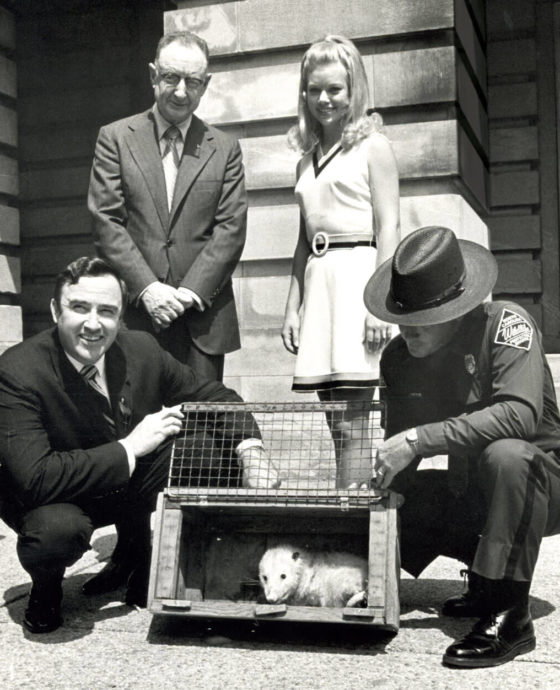 Apologies to people who enjoy eating opossum meat, but apparently, it’s not a thing that a lot of people want to eat. Advance eww warning: it’s greasy. You have to catch an opossum live and feed it clean food like corn because who knows what that critter’s been eating. President Jimmy Carter, who grew up occasionally eating opossum during the Great Depression, was once asked about the best way to serve it. “In very small portions,” he replied.

So it’s a little weird that Gov. Bob Scott was really into it. His father, Gov. W. Kerr Scott, once made liking opossum a part of the proclamation for becoming a “Country Squire,” North Carolina’s version of the Kentucky Colonels. In 1970, upon tradition, the younger Scott received the winner of the “Prettiest Possum” award at the Spivey’s Corner Hollerin’ Contest. That year, the honor went to an opossum named Slow Poke, who was accompanied to the Executive Mansion by the winner of the beauty contest, Margaret Ann Wilkes. The idea was that Governor Scott would eat the opossum. When Wilkes told him that she’d never tasted it, he invited her to a dinner at the mansion to, you know, make short work of Slow Poke.

None of this went well.

The Raleigh News & Observer caught wind of this and wrote several stories, culminating with a front-page article entitled “Kangaroo’s Cousin Surely Won’t Vote for Democrats.” After that, hundreds of people called or wrote to the governor, telling him not to eat Slow Poke. So, as politicians sometimes do, Governor Scott listened to public opinion and granted the opossum clemency on July 31, 1970. Slow Poke was set free at Raven Rock State Park, close to where he’d been caught.

After all of this, Governor Scott gave, perhaps, one of the greatest quotes ever uttered by a North Carolina governor: “I shall not be thwarted in my appetite for opossum.” And he wasn’t. A few years later, he served it at a black-tie dinner.

The Virginia opossum became North Carolina’s official state marsupial in 2013 (it’s North America’s only marsupial). And governors don’t eat them anymore, as far as we know. If you are what you eat, you certainly don’t want to be the kind of politician who’s best known for rolling over at the first sign of trouble.