Hadley Twiddy was 8 years old when she started working for her father, Doug, at his Outer Banks property management company. Back then, she was just putting together information packets and folding linens, but she was already taking notes as she watched her father build his business. “My dad has always stressed how important hospitality is,” says Hadley, now 41. “Not just the service, but how people feel they are received, how welcome they feel.” 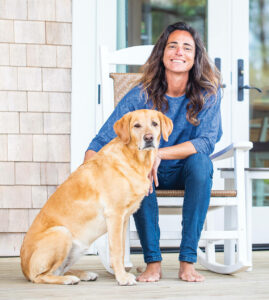 Hadley brought her family’s commitment to hospitality with her when she launched her kayak and stand-up paddleboard tour and rental company, Coastal Explorations, in Corolla in 2008, and again when she opened the Corolla Village Inn in the heart of the quiet, historic village. Just a block off the main drag, the cedar-shaked structure appears to have taken root with the live oaks that shade the property, though it was only built in 2019. The 12-room inn offers something unique for the area — space for those who want to come for a night or two or three, rather than the weeklong reservations required by most rentals in the area.

Even with the constant turnover, the inn feels homey and laid-back. When guests arrive, they’re greeted by Hadley herself or by Harli Clayton, one of two assistant innkeepers. In the mornings, assistant innkeeper Kimberly Moffatt keeps tabs on the place. Notably, she’s often barefoot; she’s comfortable here, so the guests are, too.

In the lobby are subtle homages to Corolla’s history: Books on duck hunting. Whelks that Hadley gathered from the beach nearby. A mantelpiece made with wood from a shipwreck. Photos offer a glimpse of the area when it was little more than a barren swath of land with just the Currituck Beach Lighthouse and a few fishing shanties — before Corolla transformed into a retreat for wealthy duck hunters and conservationists and then, only recently, a beachy haven for tourists.

In the 1970s, Doug Twiddy opened Twiddy & Company in Duck with just a handful of listings. As tourism started to surge, he worried that Corolla’s history would disintegrate with the dilapidated homes in the old village. He decided to try his hand at restoration.

The first project was an old lifesaving station in Kill Devil Hills, one of 11 such stations built in 1878 that were used by surfmen tasked with responding to frequent shipwrecks. At the request of the previous owner, Doug moved the building to Corolla before restoring it and turning it into an office for Twiddy & Company. 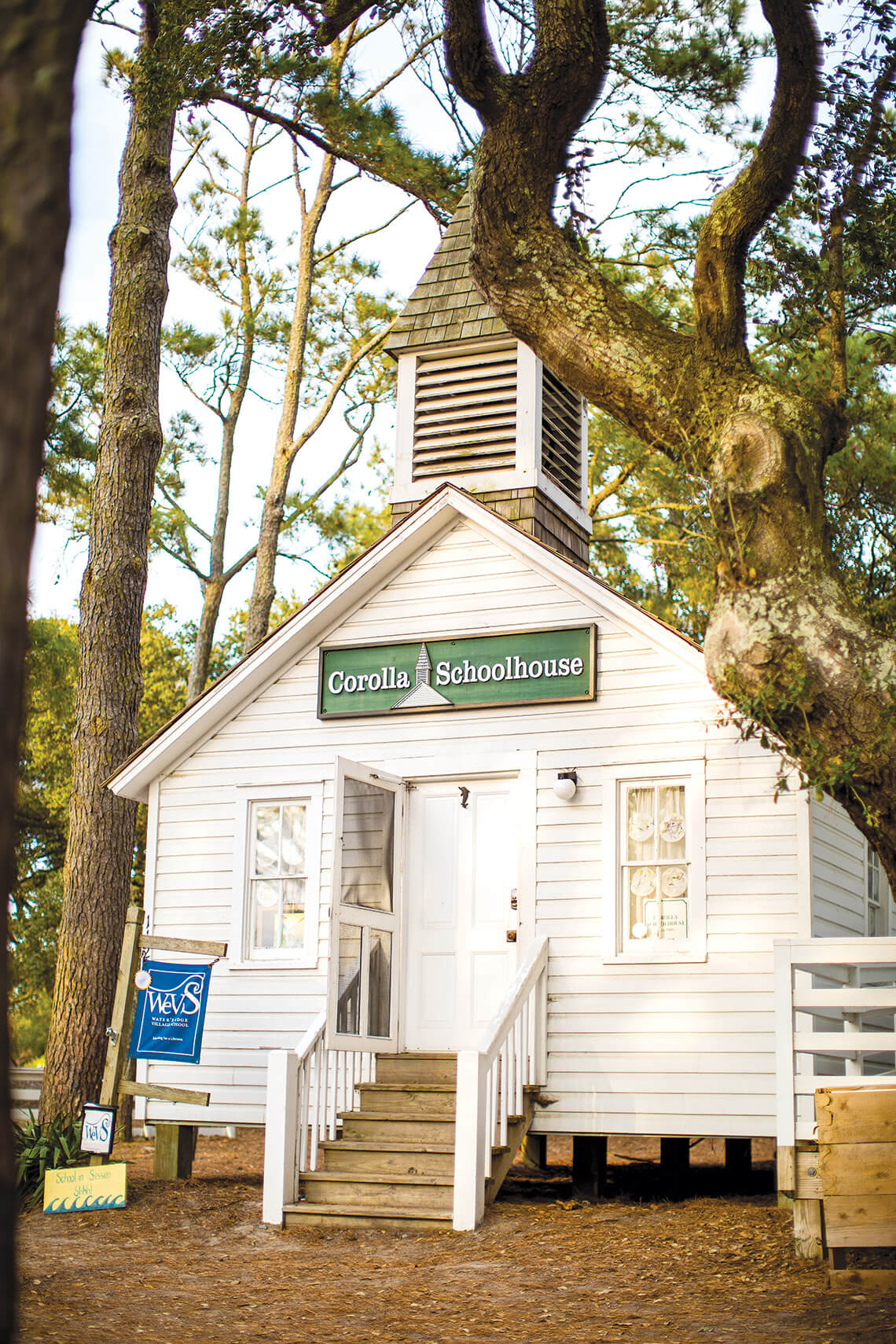 The Twiddys have restored nine historic buildings in Corolla, including the last original schoolhouse on the Outer Banks, which was built in the late 1800s and now holds classes once again. photograph by Chris Hannant

The experience launched the family into a series of preservation projects. The Parker House became the Corolla Village Market, then The Kind Cup, an art and coffee shop; the home’s garage and outbuilding became Corolla Village Bar-B-Que. The Gray-Lewark House, a Colonial Revival bungalow once owned by the local schoolteacher and her husband, became the Corolla Wild Horse Museum and Gift Shop; its outbuilding serves as a photography studio and its smokehouse is a juice shop. The old schoolhouse, built in the late 1800s, was also restored, and today operates once again as a K-8 school.

In time, the entire village came back to life. During those years of restoration, Doug often mentioned his vision for an inn where guests could spend the night immersed in the village. After a decade of running Coastal Explorations, Hadley decided that she could make that dream a reality.

“My joke is that the next day, pilings were going in the ground,” she says, laughing. Though most of the buildings in the village are restoration projects, the inn is a new structure. Still, the exterior fits in seamlessly with its neighbors, while inside, things are fresh and new. Blue and sand tones throughout create a beachy feel free of kitsch. There’s plenty of inviting common space, ranging from a balcony on the second floor, where guests can watch the lighthouse flicker on, to cozy nooks for card games on stormy nights.

The guest rooms are spacious, and each has an external entrance — a feature that proved fortuitous when the Covid-19 pandemic hit almost a year after the inn opened in May 2019. After months of isolation — and even a period when Outer Banks bridges were closed to visitors — guests came back eager to travel, to explore, and to be somewhere with heart and community and meaning in a place where they felt safe, Hadley says.

“Instead of an hour walking through town, you actually get to stay in this village; you get to participate,” she says. “You get to walk to the coffee shop every morning, and you get to see the schoolkids when they’re on their lunch break outside, and you get to see how the village operates on a daily schedule. I think that’s one of the things that people just love — feeling as though they’re a part of something with substance.”

While the inn was shaped by the Twiddy family’s focus on hospitality, it was also influenced by details that Hadley has picked up during her own travels. One example that she borrowed from an inn in Puerto Rico: complimentary beach supplies so that guests don’t have to travel with bulky chairs and coolers. The kitchen pantry offers locally roasted coffee, soft drinks, light breakfast items, and snacks, all included. Outside, there’s a rack filled with bicycles so that guests can explore the village and beyond, all at a leisurely pace.

More than 30 years have passed since Doug’s first renovation breathed new life into the village. Looking ahead, Hadley doesn’t see dramatic change on the horizon. She hopes that Corolla becomes more of a year-round destination, with the inn as an anchor. And if a sit-down restaurant popped up someday, she says with a laugh, that would be a welcome addition.