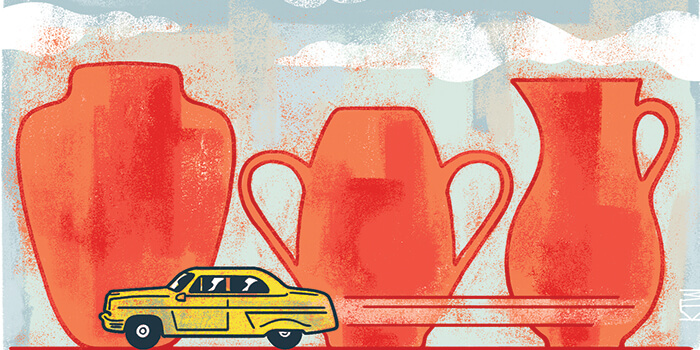 On many a Friday when I was a boy, my family drove from Elizabeth City to Chapel Hill to see my grandparents, aunts, uncles, and cousins. In Bunn, NC Highway 98 made a left turn and then gave its westbound travelers a hilltop prospect over a great, miles-long range of fields and forests, and then the two-lane blacktop went undulating over long, straight stretches, ribbonlike toward Wake Forest and Durham.

These trips were in the early and mid-1950s, the roadcuts still fairly new and not yet swarmed over by Virginia creeper and kudzu vines. We would reach this terrain late of an afternoon, and the western sun would be striking and saturating the red clay of those cuts, and I never could get enough of that rich, deep, ocherous color, never could look away. For tone and depth of effect, nothing in the crayon box even came close.

As soon as I saw the powerfully red dirt on those late-day drives, it always struck my heart that we had left the sound country for sure and were now in a very different place, now gliding into the hills of Carolina. I knew that Chapel Hill could not be too far away and we would be there soon, just as soon as we made it through these long, topless tunnels of red clay.

Once there, my cousins and their friends taught me how to dig handfuls of red clay from bare ditch banks; wet the clay and fashion little plates, small saucers, and cups out of it; and lay them all out in the sun to dry. Our creations were fragile and fell apart easily, but I got the idea — clay was a different sort of earth from the sandy loam and black dirt I saw in our farm fields in the northeast, and it had amazing uses. Though it may well have been novel to my 6-year-old self, clay — and its great worth in handicraft — was as old as these hills, and, to my surprise, there was far more clay in the Coastal Plain than I might have imagined.

Potsherds are plentiful across our state, bits and pieces of clay pottery testifying to 500 generations of human life in our province.

We have seen them in the shallows around the sound country’s inner islands, such as Davis Island in Core Sound. There, perhaps 15 years ago, a storm sheared off a face of peat — the topsoil just above Davis Island’s beach — revealing the halves of three clay bowls nesting in each other, as they must have for untold centuries. We have seen clay bowls rise, once students dug them up, from the long-buried, charred ruins of Fort Neoheroka near Contentnea Creek in Greene County, testaments to the violent end of the Tuscarora War. Farther west, half a million clay pottery fragments were unearthed at the Town Creek site in Montgomery County. Westward still, where the Cherokee have long made fired vessels of clay dug from Soco Creek, patterns from ancient potsherds have found their way into the works of modern Cherokee potters.

Seagrove, epicenter of the clay “turners and burners” written of and well honored by Carolina scholar Terry Zug, so inspired the legislature that it declared both the community and clay to be state symbols. Well before I ever heard of Seagrove or Jugtown, I learned of the Coles of Sanford and drove down one Saturday to see what they and their wares were all about. I remember Mr. Cole, the slender patriarch, and his shop and kiln right alongside U.S. Route 15-501 above Sanford — he went striding about the shop as if in a trance, moving clay bowls and pots in various stages of work closer to, or farther from, his kiln. His hands were shaking as he approached one five-foot board laden with half a dozen large pieces, yet the moment his hands latched onto the board to move it, they were firm, solid as iron, and as balanced as a Toledo scale.

Back in the summer of 1992, we were staying with our three small children in a small cottage on the waters of Beaufort’s Taylor’s Creek, and we’d pile into the johnboat as often as four times a day and float over to the little Town Marsh beach the locals call “Cape Carrot.” There, the children swam, played with shells, made castles and creatures of sand and mud. Once, 7-year-old Susannah dug deep into the beach and collected a bucketful of dark gray clay, which she took back to the cottage and went to work with it. Two of her creations were diminutive sculptures of the wild Carrot Island ponies, to which she added grass seeds and shreds for their manes and tails.

Many tides have flooded and fallen through Beaufort Inlet since she presented me with this pair of ponies, yet they still ride along a slender strand of beach, on top of the window trim in our office at home, proof to this day, to both eye and heart, of the absolute, abiding strengths and joys of Carolina clay.