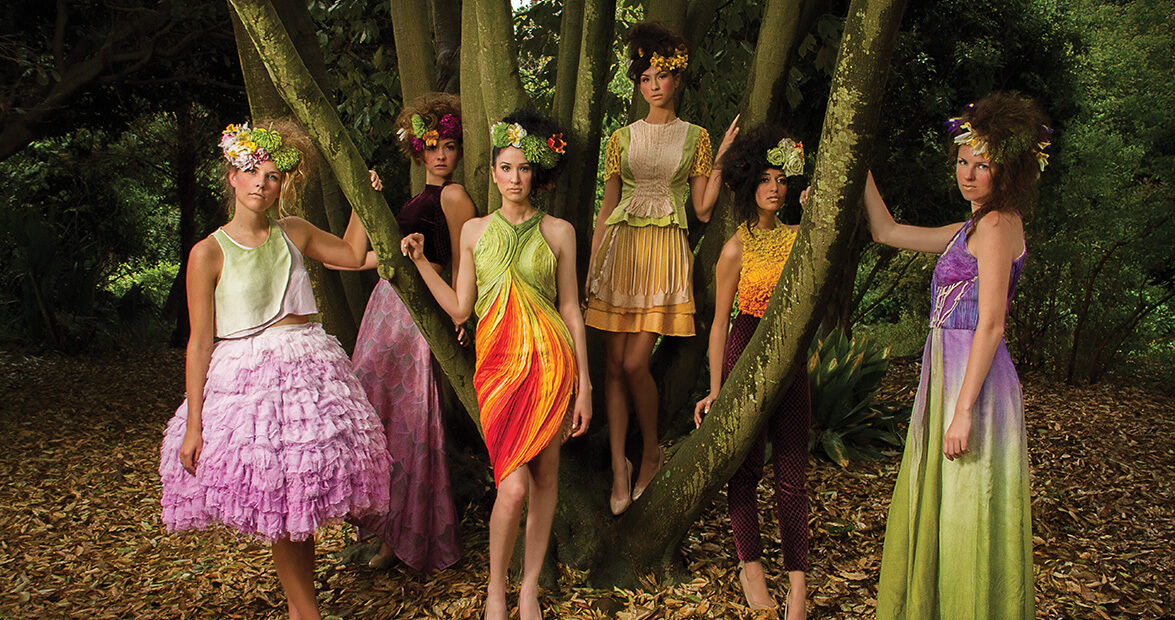 At the North Carolina State University College of Design, students transform emotion into form, and tell stories through textiles. One common thread is the story of our state. The Art2Wear program, sponsored in part by Cary-based Cotton Incorporated, showcases designs that draw from global, national, and most importantly, local inspiration. The program has been a stepping-stone for local fashion brands such as Raleigh Denim, Holly Aiken, and Lumina.  design.ncsu.edu

What started as a North Carolina State University College of Design hobby in 2009 has grown from small-scale neckwear into a basic menswear line in downtown Raleigh. Inspired by the power of domestic production in a declining North Carolina textile industry, Barton Strawn adopted the Lumina mission: to source and produce quality basics that complement the male wardrobe, right here in the USA — and North Carolina. luminaclothing.com

In 1993, as the apparel industry looked overseas for lower-priced labor, CEO Tom Sineath and president Eric Henry held their ground in Burlington, and decided it was time to “fix the T-shirt” for good. From the cotton farmer in New London all the way to your dresser drawers, the dirt-to-shirt brand reinvented the way T-shirts are made. Theirs are socially-conscious, environmentally sound, and trackable within 600 miles of the Carolinas. tsdesigns.com

Kelp’s holdfast, a rootlike structure, binds it to the seafloor. After traveling across the country, Courtney Leigh Johnson founded Holdfast Outfitters in the mountains of western North Carolina — a place she wanted to be anchored to. Her “mountains to sea” designs are inspired by the nature of the state and an outdoor Asheville lifestyle, one that ranges from mountain climbing to brewery hopping, all in a day’s time. holdfastoutfitters.com

To owner and founder Judy Hill, High Cotton isn’t just about bow ties and shirts; it’s a “made in the South mission” that came together as more of a dream than a men’s apparel company. Handcrafted in the Mount Airy area, the ties support the revitalization of the state’s textile industry and the Southern tradition of an approachable, well-dressed gentleman. After all, the first High Cotton tie started as a gift to Hill’s son. highcottonties.com

Mother-daughter team Zulay and Steph Smith were at very different stages of their lives when their “Aha!” moment hit, and Zass Design was born in their Raleigh home. The duo’s environmental bent and eye for design led to the creation of a jewelry line made from recycled materials, rescued throughout North Carolina, for truly one-of-a-kind pieces. For this pair, every material has a purpose, and each piece tells a unique story of its past, present, and future. zassdesign.com

As Shakespeare described the visage of an ancient face as a “map of days,” leather ages and darkens with time to reveal a memoir of flawless imperfection — its own map of days. Inspired by a shared love for music and art, longtime friends Samantha Greaves and Nora Rogers reinterpret the rich utilitarian textile and craft heritage of the Piedmont into a simplistic line of natural, American-leather accessories, handmade in their Carrboro studio.  mapofdays.com

For 40 years, designer and goldsmith Sara DeSpain has used the Outer Banks not only for inspiration, but as a mold for her jewelry designs. The beauty of the Banks and the mystic nature of the sea are translated into her representations of native shells shaped and shifted by the ocean. Just as every beachgoer has their own memories, DeSpain leaves the interpretation of the pieces up to the beholder, for their own timeless preservation of the ever-changing shore. saradespain.com

Following a move to Durham in 2011, a stack of feed sacks compelled Jessica Ullom to revisit an old hobby: sewing. Before long, demand for Hawks & Doves products made with American-sourced textiles expanded from farmers markets to stores throughout the Southeast. Her kitchen accessories, including knife rolls, have been “used, abused, tested, and approved” by James Beard award winners, not to mention Triangle-area chefs. And the name? From her favorite Neil Young album. shophawksanddoves.com

Anjelique Kyriakos was an intern at Our State in spring 2015.