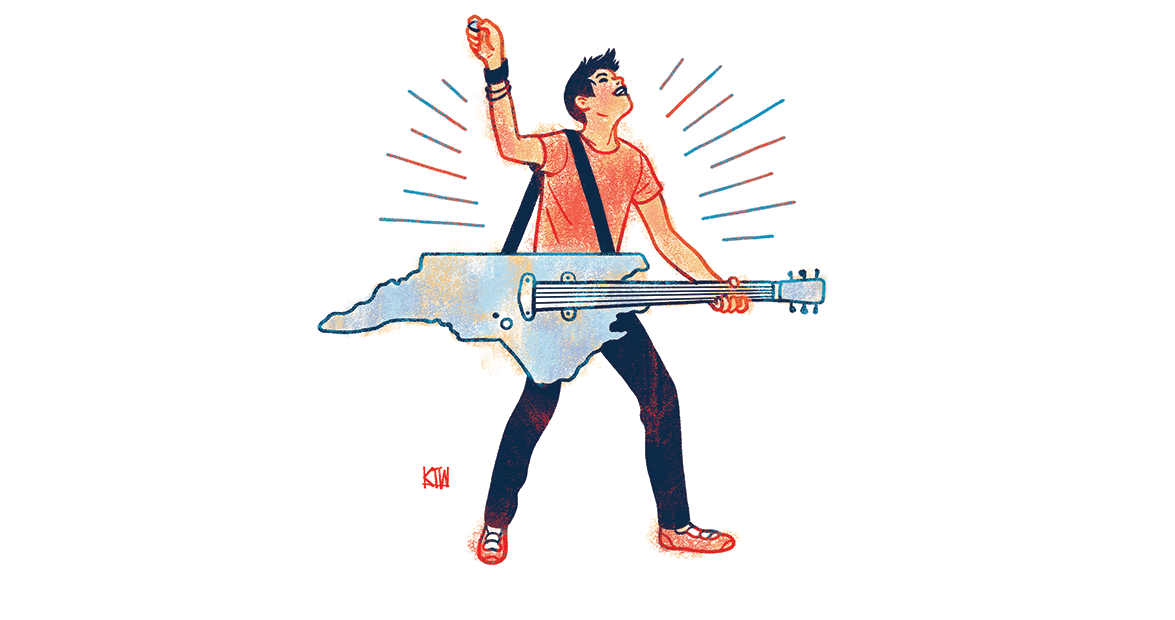 Mostly, I remember Miss Mary Burke Kerr Robertson as the writer of North Carolina’s state song. I was only recently corrected by an article in this magazine that identified Miss Mary Burke Kerr (before she married Mr. Robertson) as co-author of the “State Toast.” I admit to some initial confusion. Who sings a toast? But the words to the toast are definitely set to music. Not only do I know the tune that accompanies the words “Here’s to the land of the longleaf pine/The summer land where the sun doth shine,” but I have often, over the years, prompted by nothing in particular, carried the tune. I have no idea where I learned this song — Miss Mary Burke Kerr Robertson was not shy, but I don’t remember her forcing us to perform her own compositions — but it seems to be one of those things I have always known about this state.

After listening to “The Old North State,” the actual state song, on the Internet, however, I realized that I had never heard this song before in my life. I don’t know where I would have heard it. Maybe if North Carolina seceded and we took our newly national talent to the Olympics and cleaned up on the basketball court and it was played at the awards ceremony? Perhaps I would hear it if I spent more time hanging around the General Assembly? It’s a languid tune, reminiscent of something that might accompany the roll of the credits in an early black-and-white movie, though I don’t necessarily disagree with the person on YouTube who asked why the anthem sounds like it belongs to a former Soviet country.

Other states appear to have adopted anthems by more contemporary songwriters: John Denver (Colorado and West Virginia), Bill Monroe (Kentucky), and Arlo Guthrie (Massachusetts). If we chose to replace our song with something more recent and popular, the obvious choice, to most people, would be James Taylor’s “Carolina in My Mind,” but that song seems geared toward expatriates, not natives. Yes, it’s true that, when traveling, we North Carolinians often think with fondness of our state, but when we are home, we have no need of going to Carolina in our minds. We can just walk out the door. Actually, we don’t even need to leave the house.

Should we go the special-category route, like the states that have a state rock song as well as a more staid selection, the choice in the rap/hip-hop category would be Greenville native Petey Pablo’s “Raise Up.” Any song that name-checks Polk, Bladen, Hoke, Pasquotank, Warren, Catawba, and Halifax counties, as well as Marshall, Burgaw, Newport, Kenansville, Tarboro, Goldsboro, and Statesville deserves at least consideration for the title, and there is a catchy chorus that stays with you years after you’ve last heard the song: “This one’s for North Carolina! C’mon and raise up/Take your shirt off, twist it ’round yo’ head/Spin it like a helicopter.” Of course, the song would have to come with a parental advisory.

In the funk music category, we could go with something by Kannapolis-born ambassador of funk, George Clinton. His mid-’70s staple “Flash Light” is already played at nearly every wedding party in America.

And then there are our many country, folk, and bluegrass artists, as well as those who cross genres. In this category, I would nominate twangy rocker Ryan Adams’s ballad “Oh My Sweet Carolina,” the chorus of which says it all: “Oh my sweet Carolina/What compels me to go/Oh my sweet disposition/May you one day carry me home.”

There again, though, we have the issue of some native singing the state’s praises from afar, which leads me back to Miss Mary Burke Kerr Robertson. Every time I hear her state-song-which-is-actually-the-state-toast, I relive the fear of a ruler upside my knuckles. And although I never learned to play “Für Elise,” I did learn one thing from Miss Mary Burke Kerr Robertson: Curl your fingers and keep on playing your song.