Michael Ezzell won a gold medal for his pork chops.

He chased that award for nine years before he finally earned it in 2007.
He was only 9 years old when he first presented his pork chops at a North Carolina 4-H food-demonstration show in Richmond County.

Since the ’70s, school-age 4-H youth have competed in such county- and state-level competitions, in categories from beef char-grill to egg cookery.

“That first year I competed, I was really nervous and didn’t really know much,” Ezzell says. “But after that, I was hooked and wanted the gold.”

So he searched in food magazines and found a marinade for pork chops. With his parents’ help, he tested and tweaked the recipe to his liking. He came up with something a little tart, with some heat.

The marinade includes Italian dressing and Dijon mustard, a splash of hot sauce, and a dash of cayenne pepper.

The recipe helped Ezzell advance from the county-level food show to the state level. There, he competed in the pork-cookery category against as many as a dozen other 4-H members from across North Carolina.

In 2009, when N.C. 4-H decided to publish a cookbook to commemorate its centennial, the organization asked Ezzell and the others to contribute their award-winning recipes.

Every entry in the cookbook once placed at either the county or state competitions.

Ezzell submitted his recipe for pork chops and one for grilled, marinated vegetables, which was a side dish to the pork chops that won him a state gold medal.

Ezzell is 23 now, too old to be in 4-H, but he’s proud of his accomplishment. The gold medal, yes, but more important, that his name is part of a legacy of good cooks. 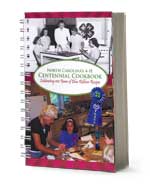