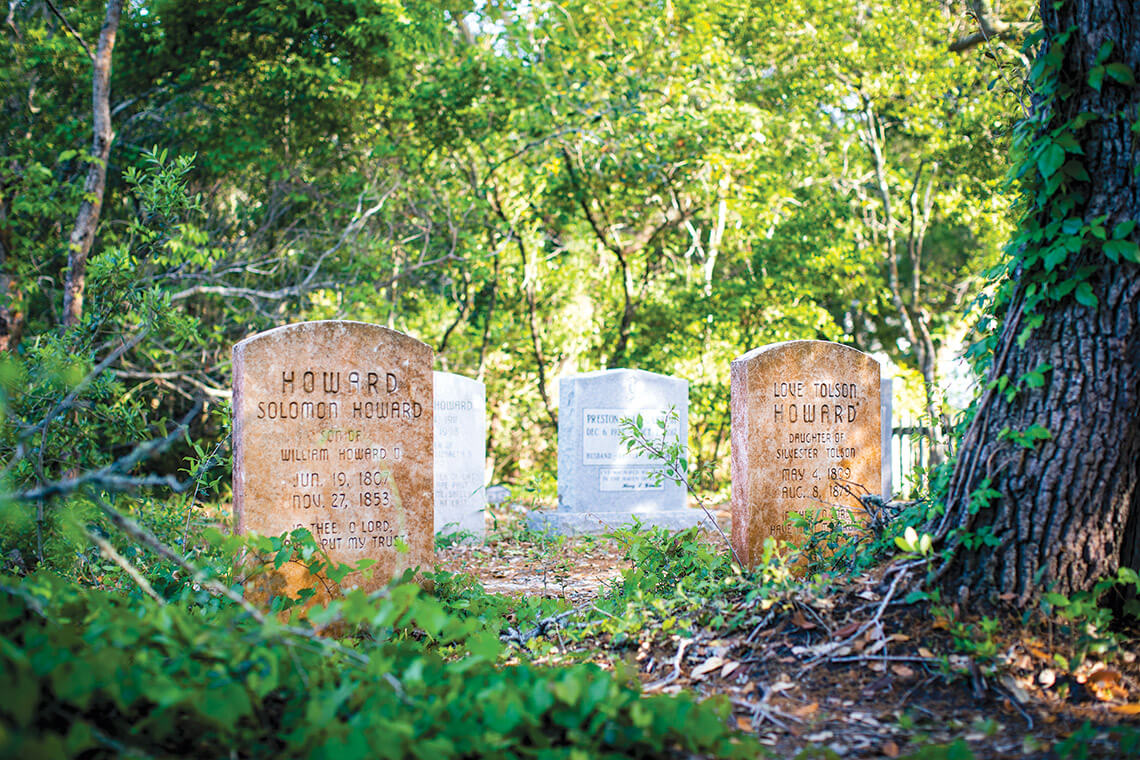 Howards have lived on Ocracoke since 1759, when William Howard purchased the island. photograph by Chris Hannant 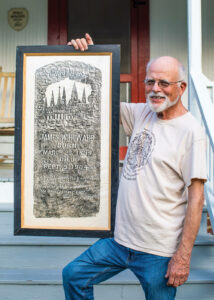 Family historian Philip Howard can trace his lineage through eight generations of notable relatives, like Capt. James Howard, whose gravestone rubbing is a prized possession. photograph by Chris Hannant

“’Tis hard to break the tender cord, when love has bound the heart. ’Tis hard, so hard, to speak the words, ‘We must forever part.’ ”

’Tis also hard to stroll Ocracoke Island’s paths without stumbling upon a Howard family burial ground. Howards are buried in most of the island’s 80 or so cemeteries. Ten generations (and counting) of descendants of William Howard have lived on Ocracoke since Howard purchased the island in 1759. A walk through the Old Howard Cemetery is like entering a living book of poetry on heartache and love. Like Capt. James Howard’s epitaph, many of the gravestones hold inscriptions of hymns, poems, Scripture, or plain old human emotion. Many also face away from the grave so that visitors won’t stand on their loved ones.

Most of the epitaphs are signs of the times, borrowing lines from popular hymns or Scripture, according to Philip Howard, an eighth-generation Ocracoker and William Howard descendant. In reading Elnora Ballance’s stone on Howard Street — “She was as good as goodness is. Her acts & all her words were kind & high above all memories I hold the beauty of her mind” — we understand that we can miss people we never knew. 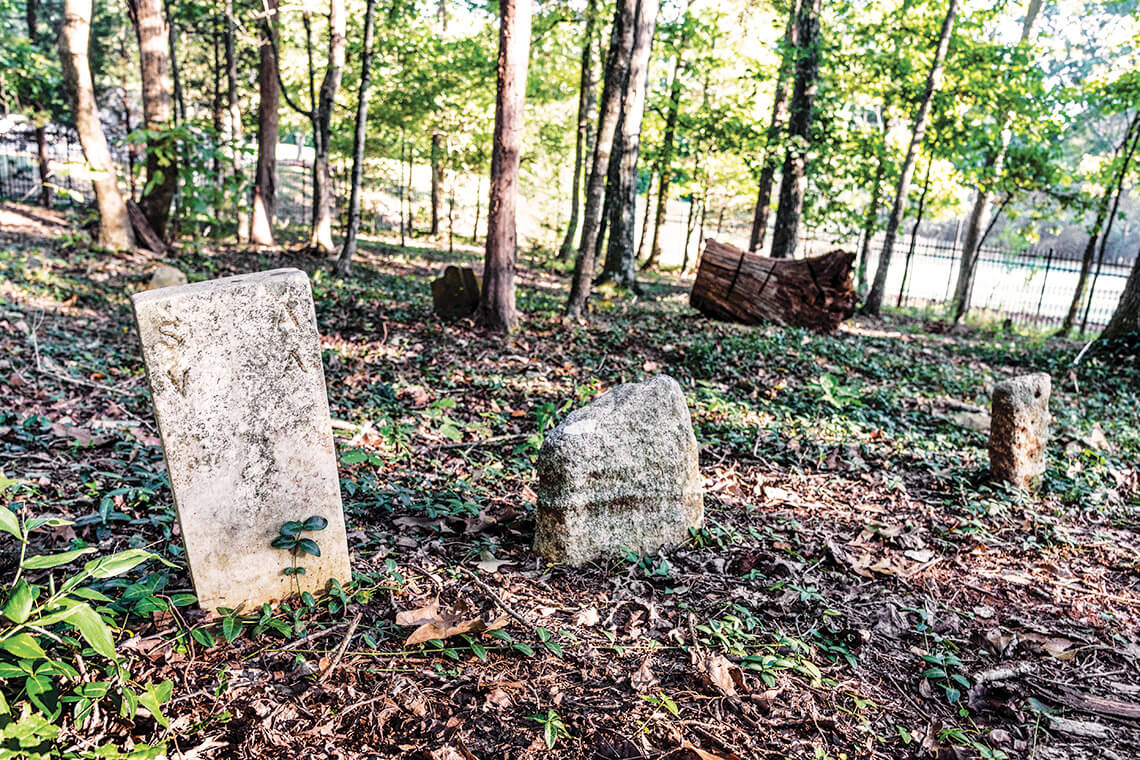 An unknown number of enslaved people are buried together in the largest slave cemetery in Mecklenburg County. photograph by Jay Sinclair

Although the bricks and columns of some cabins and many towering plantation homes survive, the human parts of our heritage, and those parts made of things less tangible than flesh, more often quietly return to the earth.

Crouched near apartment complexes and townhomes is a simple, black metal fence, the only sign that this busy urban space was once something else. Inside the fence, one inscribed stone, identifying a woman named Violet Alexander and a man named Solomon Alexander, sits among the leaves. 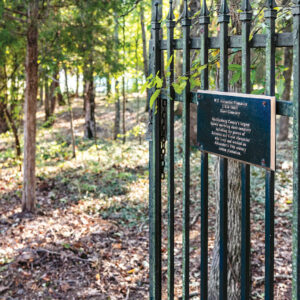 Most of those buried in W.T. Alexander Slave Cemetery in the Mallard Creek community remain unaccounted for, but Violet and Solomon wait there for their history to be told correctly. Until now, it’s been told by those who enslaved them.

“Slave cemeteries like this one are a special part of our history because we don’t have many artifacts of the African American culture during that time,” says Stewart Gray of the Charlotte-Mecklenburg Historic Landmarks Commission.

Trees and a blanket of periwinkle continue to shelter Violet, Solomon, and others buried here. They may never get to tell their stories, or the stories of their friends and children beside them, but they can point to a history that needs to be remembered. 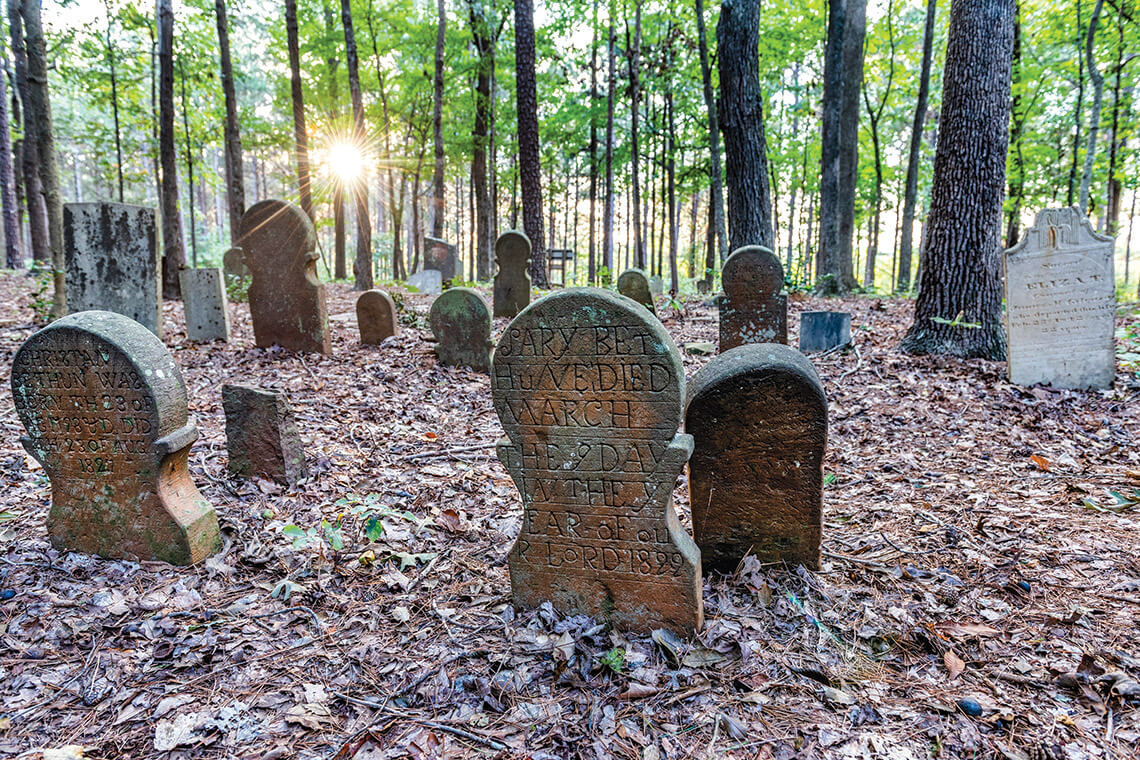 The influence of Scottish immigrants can be seen, and heard, throughout North Carolina. Their memory endures in the Old Scottish Graveyard in Moore County. photograph by Jay Sinclair

Yonder through the trees outside Carthage, you might could get a window to a world not often remembered. Before the Revolutionary War, many from the Scottish Highlands and the Isle of Skye moved to areas of the Cape Fear River Valley, like present-day Moore County. Among pine trees so similar to those back home, they farmed, built towns, spoke Gaelic, and left behind burial grounds similar to the one nearly hidden in the woods off Bethlehem Church Road.

“More Scots migrated to North Carolina in the 18th century than to any other state,” says Lloyd Johnson, professor of history and director of historical studies at Campbell University.

Their culture lingers on the tongues of many North Carolinians who speak Scottish words and phrases like “yonder,” “might could,” and “nary.”

It also nests in our names. “All you have to do is open a telephone book in the area to see Highland Scot surnames,” Johnson says. “Names like MacDonald, MacNeill, and Black.”

Or you can tarry in the pine needles and oak leaves, and pick between the old stones. You can see Gaelic scrawls and these graves of loved ones placed tenderly beside each other, these people still knitted into us today.

Look through the big steel arch stretching from the green at Fort Nooherooka in Snow Hill. Try to picture the agricultural fields that once rolled across the grass where the monument now sits. Look a little harder, and imagine the terrible battle between the Tuscaroran Nation and colonists in 1713, one that nearly rubbed out one of North Carolina’s first and strongest people.

Then, look toward the tree line. Before the war, a village once held the songs and dances of a community, family suppers, and jokes between close friends.

The state protects most Native American burial grounds by keeping their locations hidden. This old tobacco field conceals fragments of a way of life unknown even to many descendants of those who once lived there. It also covers a bulk of long-forgotten sorrows that some are now working to remember.

“There were two parts to the battle,” says Larry Tise, a professor of history at East Carolina University. After one, “Tuscarora dead were taken and put in a mass grave outside the fort. That grave has never been excavated. It is sacred ground.”

With more than 12,000 years of Indigenous history in North Carolina before Europeans made contact with the continent, nearly every inch of the state harbors some relics and stories related to these past lives.

“Whenever I learn something new about my people, like I did from visiting Nooherooka, it gives me hope that someday the Tuscaroran people will be looked upon as who we really are,” says Onyas Locklear, a council member of the Tuscaroran Nation of North Carolina. “Until then, we’ll still do our ceremonies, sing our songs, and dance our dances, and we’ll get along how we can.”

It’s called “The Road to Nowhere,” but it leads to what’s left of a drowned world and the loving dedication that has persisted for more than 70 years. In the 1930s and ’40s, to facilitate the creation of Great Smoky Mountains National Park and Fontana Dam, residents of communities in Swain County were forced to sell their land to the federal government. In return, the displaced were promised a road to access their family burial sites. Instead, the government flooded residents’ towns and homes, and only built a stretch of road that’s nearly seven miles long and ends abruptly at a tunnel almost a quarter-mile long.

“There are probably hundreds of tiny family cemeteries around out there,” says Ben King, a Swain County native and co-owner of Bryson City Outdoors. “The only way displaced people can get back to their remnant communities is to hike or boat.”

Still, the descendants come, sometimes walking miles into the woods to find their own open mossy or grassy place, or their simple, flat area beneath the canopy, telltale stones rising from the ground like the trees around them. They bring flowers, shoo spiderwebs, and clear the brush. And they remember.

Hikers often look for these resting places from forgotten communities near Hazel Creek and Deep Creek as they wander the Smokies. “Finding one of these cemeteries is a good way to instill a history about where we came from and what it used to be like,” King says. “They have a purpose, and they should not be forgotten.”