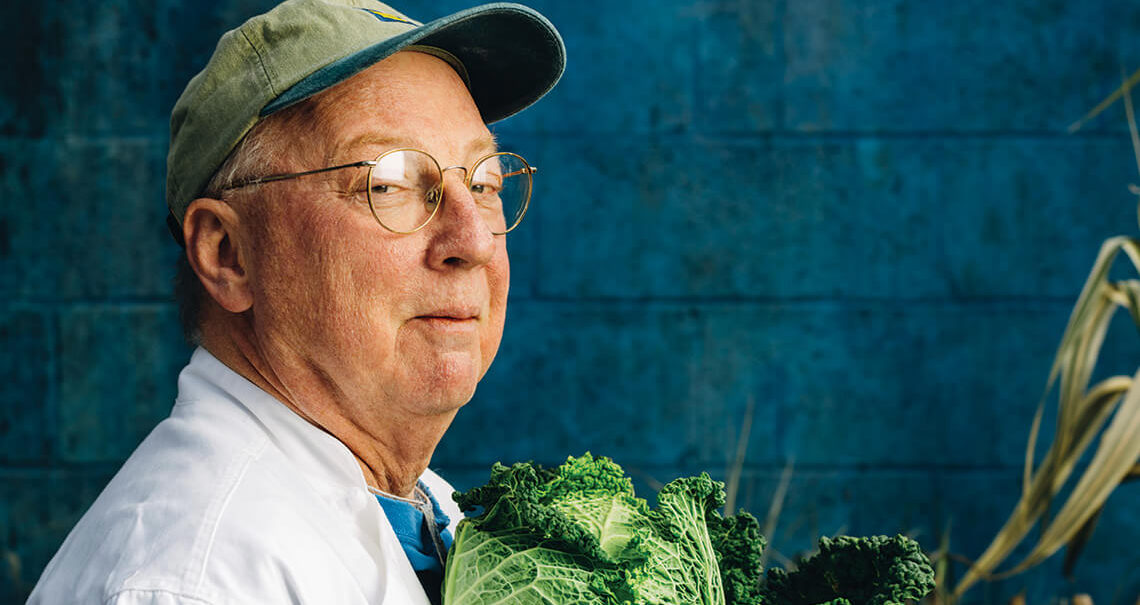 In the 1950s, when I was growing up in New Bern, fine dining meant the Governor Tryon Hotel. We didn’t go out to restaurants much. Those were the days of multigenerational households where good cooks held sway, making such things seem both unnecessary and financially reckless. “I could have made that whole meal for $3” would have been the refrain. My elders remembered the Depression and never got over it. But special occasions might have been an exception. I remember, as a little guy, getting all dressed up each year to meet my Aunt Theresa for my birthday lunch at the Governor Tryon. I don’t recall what we ate, but I do remember chandeliers, polished wood, and big mirrors reflecting the candles on my cake. This was a time before restaurant chains became established, so our other choices away from home were lunch counters, drive-ins, barbecue joints, and fish camps. Good food, to be sure, but not white tablecloth-worthy. The only time we went out as a group and sat down to eat somewhere was during our yearly beach cottage week along the North Carolina coast. As likely as not, we would be near Morehead City, so people would argue over going to Capt. Bill’s, the Sanitary, or the Beacon.

I think dining habits began to change around the time I moved to Chapel Hill to go to college in 1967. More and more women were entering the workforce — some because their families needed the income, others because they had career aspirations of their own. In any case, there were fewer “homemakers.” The food industry adapted as demands changed. Good food had to be considered in terms of convenience and economy; choices grew as the world became busier and, perhaps, pickier. The time had arrived when people needed nice restaurants where they could host a party or a business dinner, where there would be good food and a decent drink. There had always been restaurants like this in urban areas; now, they were beginning to pop up all over. 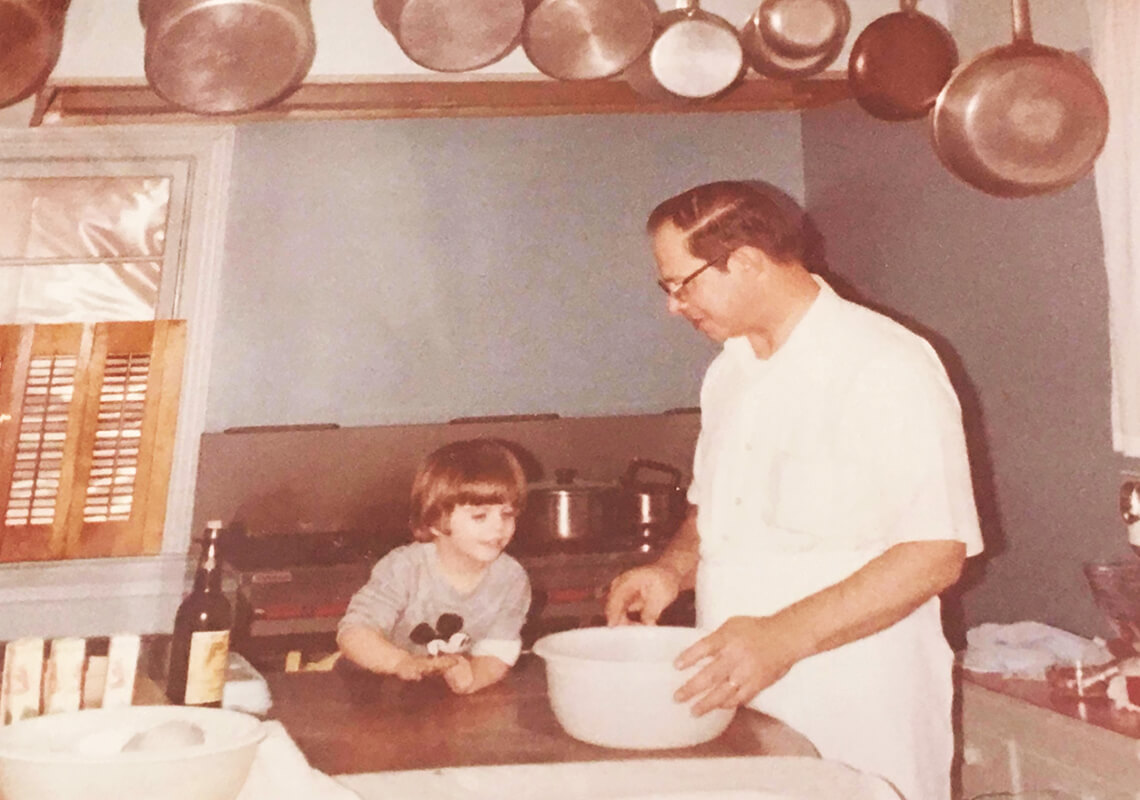 In the kitchen of the only restaurant outside of France to be recognized by the French Restaurant Association, Phillip Foreman taught his grandson, Phillip Bracewell, how to make bread. photograph by PHILLIP BRACEWELL

University towns were among the first of those places. They were more likely to have a portion of their population that had traveled or lived away from home — people who had learned that new things can be fun and interesting, and that you needn’t be suspicious of an unfamiliar recipe for coleslaw. Attitudes about value had begun to shift as well. In Europe, people had long seen an elegant dinner party in a chic restaurant as an evening’s entertainment as well as supper. It wasn’t until I had been a successful chef for years that my own father ceased to view an evening in a fancy restaurant as anything but a pitched battle to avoid being swindled.

I landed in the middle of all this at just the right time. I was living in Chapel Hill, where I was one of the owners of a music club called the Cat’s Cradle. It was a fabulous club, but we were terrible businesspeople, so I had to get a day job. One of my roommates was the head waitress at a new, sophisticated French restaurant, and she told me that they were looking for someone to peel potatoes. 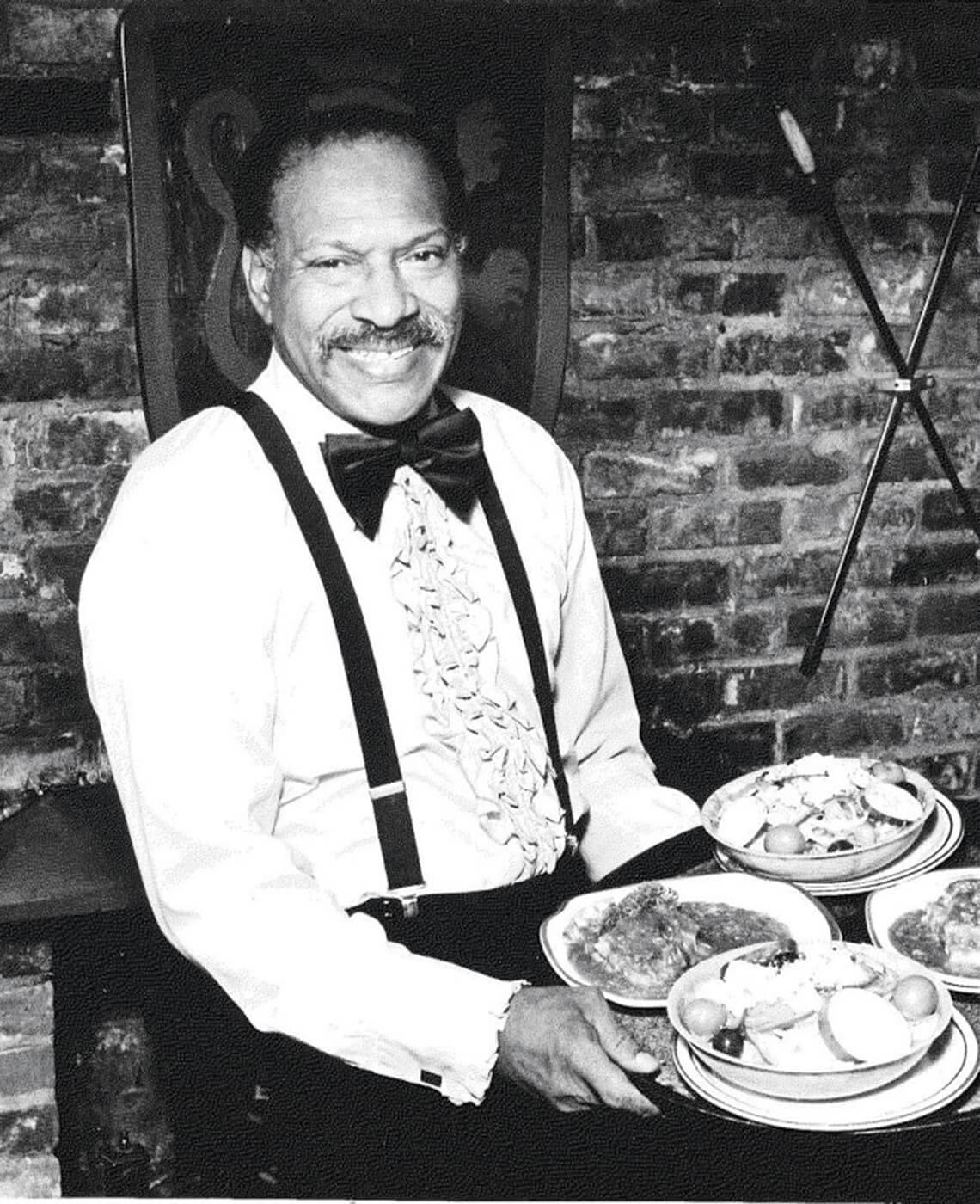 In the ’60s, dining in the Italian restaurant’s basement, known as Cellar Anton’s, was a treat for families — as was being served by its maître d’, John “Fitz” Fitzgerald. photograph by Greensboro News & Record

That French restaurant was La Résidence, Bill and Moreton Neal’s place that had just moved into town from its first location out in the country. Working in that kitchen was exhilarating. Bill and Moreton knew French food, but not always how to cook it, so we often learned as we went along. This was excellent training, and I date my general seat-of-the-pants kitchen attitude to those days.

The rest is sort of history, I guess. I had discovered that the aesthetic of the kitchen suited me just as I was beginning to grow weary of running a nightclub. After a time, through luck and attrition, I became the head chef at La Résidence. The Cradle was eventually sold — happily, because it’s still here. It turned 50 in 2019. In the early ’80s, Bill and Moreton divorced, and he went on to found Crook’s Corner. A decade later, Moreton sold La Résidence, and I followed Bill down the street to Crook’s, although by then, he had passed away. In 2019, I retired after 25 years as the head chef at Crook’s.

Running a restaurant without going broke is hard and complicated, and it was especially so back then. Both the kitchens and the public had a lot to learn in those early years. Back in the kitchen, we were guilty of a sort of innocent snootiness — the public comes for dinner, not for instructions on what they ought to like. And, yes, customers, nine shrimp do cost $12. No, people do not always wait tables because they are between “real” jobs. Yes, everybody needs to be polite. Lots of people don’t like the system of tipping (actually, lots of other people do), but that’s how the dining game is played. Don’t tell customers that your ethics won’t let you bring yourself to cook a filet well done. Don’t tell your server that you want to split the grilled tuna, but you want each half cooked differently. You see what I mean? 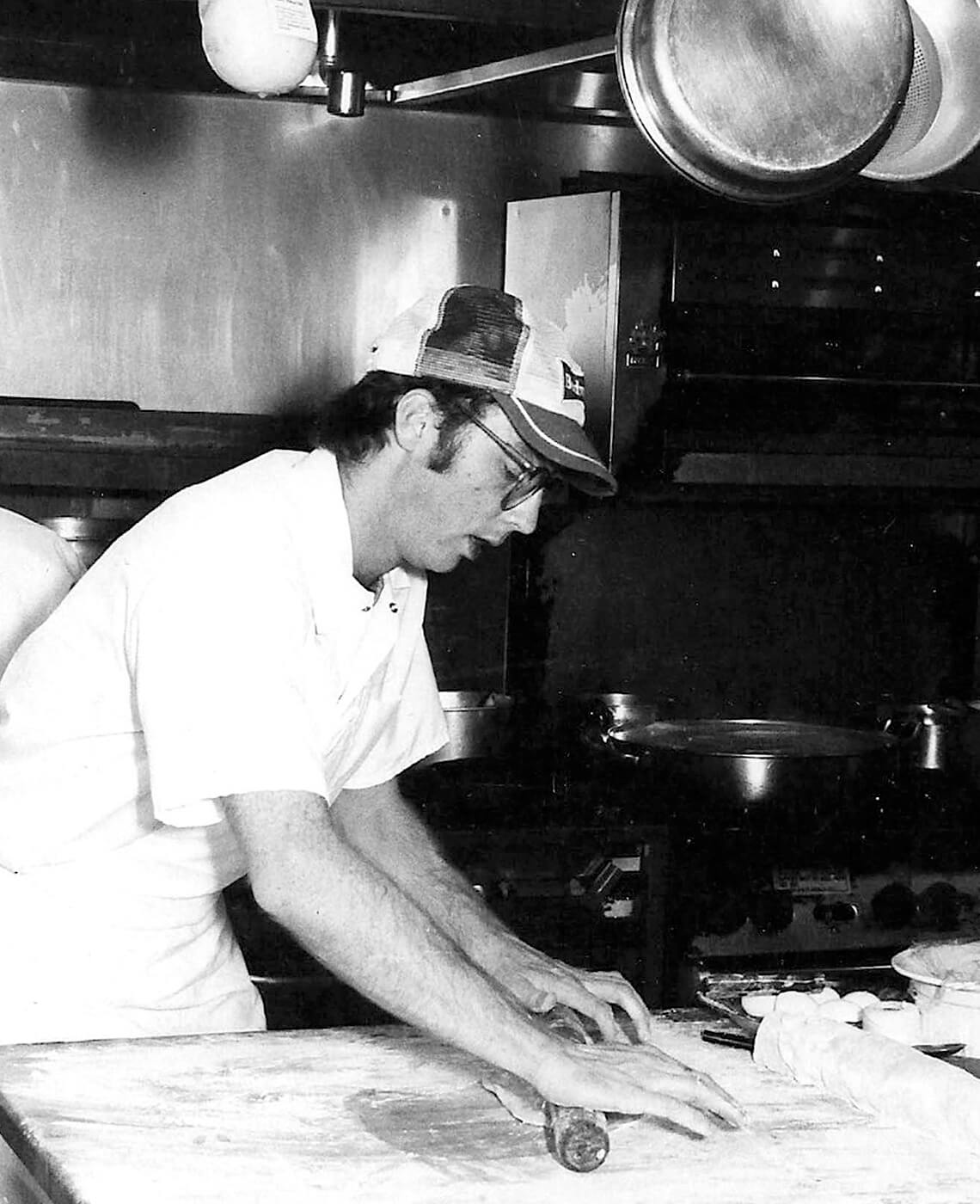 In the mid-’70s, long before Bill Smith became a 21st-century culinary icon at Crook’s Corner, he was the head chef at La Résidence in Chapel Hill. photograph by Bill Smith

In a way, at La Résidence, we were working at cross-purposes. We wanted to introduce the public to traditional French cuisine that would be new and different to many of them. But we also had to be careful not to scare everybody off because they couldn’t find anything familiar on the menu. Allowing people to order a steak, say, “without all that sauce” got us over the threshold while we were earning the public’s trust. Eventually, people did trust us enough to begin exploring things that were new to them. Whenever I think back on this, sweetbreads always come to mind. They are a common bistro item in France but were virtually unknown, and euphemistically named, here. Eventually they developed a huge following. We always joked that if you could get people to taste sweetbreads before you explained what they were (meat from the thymus gland or pancreas of a calf or lamb), they would never look back. People began to see new foods as an adventure rather than a source of peril. These days, the public is impatient with you if you’re slow to offer new things. And you’d better have more than one kind of hot sauce.

Somehow, we’ve navigated all of this, and all of a sudden — at least until the pandemic hit — we found ourselves with an embarrassment of restaurant riches. All over North Carolina, they began to appear: small, pretty — and snazzy, even. You could linger for hours. Perhaps there was nice music playing quietly in the background. There were lovely wines, and the kitchen paid attention to what they were cooking. If you were a regular, they would remember which table you liked. Some restaurants were formal, some more raucous. Others were in between. There might have been a pretty garden. Invariably, there was a pride of place shared among the staff, front of house and back. 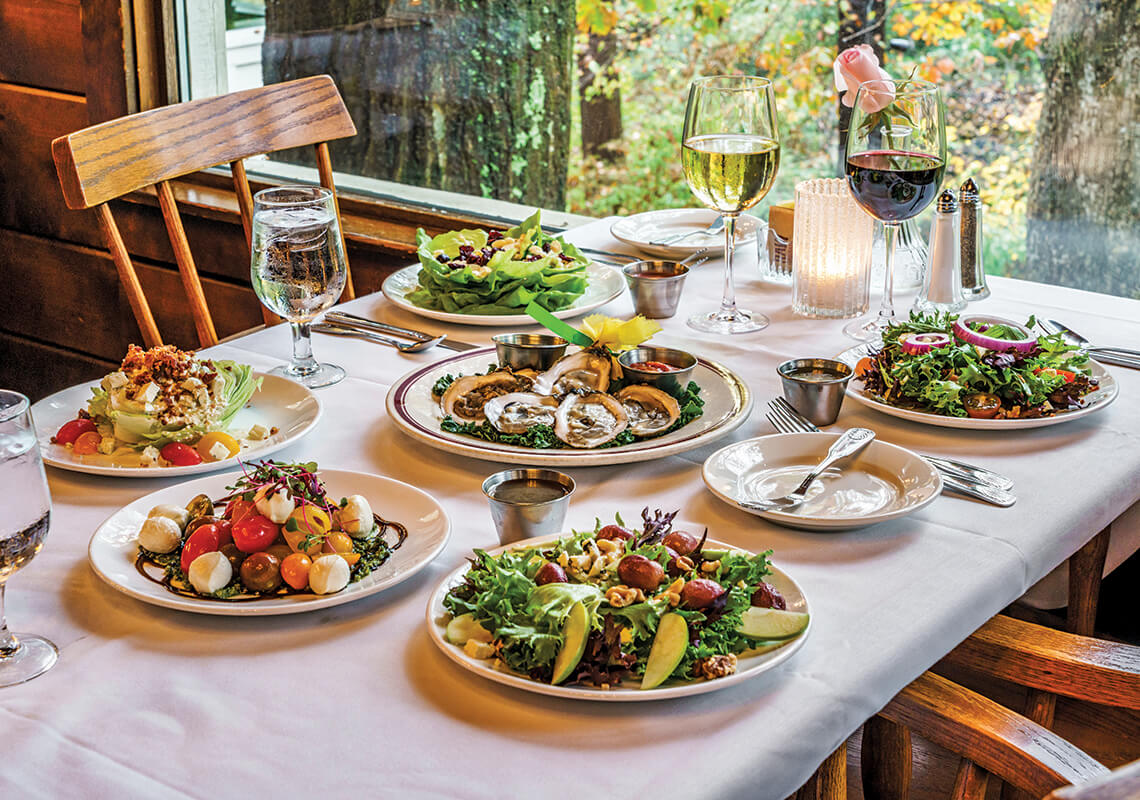 Dinners at the premier steakhouse in the Triad have always included wooded views. photograph by Jay Sinclair

Best of all, for me, was that — almost unnoticed — a tribe of esteemed colleagues was gathering. And although we are scattered all over North Carolina, we have managed to become good friends. I realized long ago that my community of restaurant people has been one of the best parts of my career. Those late-night parties that always happen when we’ve gathered from all over the state to cook for the Beaufort Wine & Food Festival or Chow Chow in Asheville are like being back at summer camp. And after each one, we can’t wait for the next time we can all get together again.