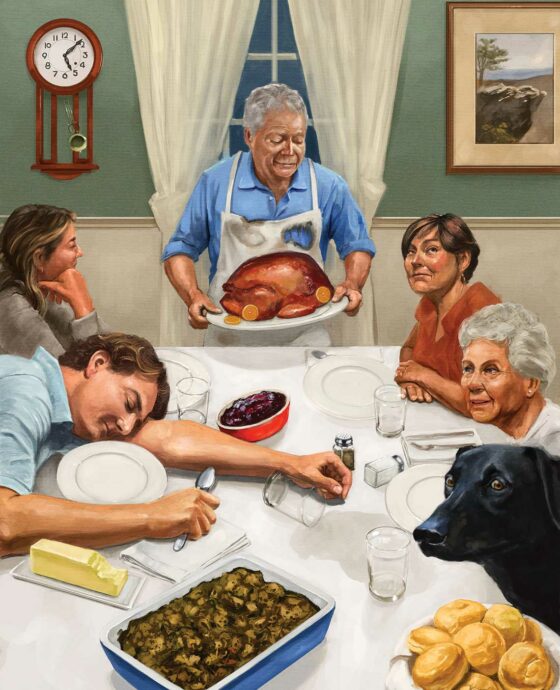 You know that famous Norman Rockwell painting of the golden-brown turkey about to hit the Thanksgiving table? The one that shows all the gleeful, grinning family members gathered for the feast? That’s pretty much what it’s like at my house each Thanksgiving, with one minor difference: If you were to replace all the characters in that picture — the proud grandpa and grandma, the giddy children, all 11 family members — with flesh-eating zombies out of the classic horror flick Dawn of the Dead, you’d have the typical scene at my house. My turkey and I are often met with murderous looks around the table. And in defense of my family, it’s always my fault.

I am famously infamous for taking forever to cook a turkey. I’m late to the table every year. And I’m not talking 20 minutes late. That would be a blessing. I’m talking an hour or better. Sometimes two. Occasionally even longer. By the time the turkey is cooked at my house, my goose is cooked as well. The stuffing has set like drywall putty. The cranberry sauce, made with a splash of brandy, has fermented to 80 proof. You could knock a turkey out stone-cold with the biscuits that have gone stale. I saunter in with my artisanally smoked turkey, layered with orange slices and glazed with molasses, but nobody’s feeling particularly thankful.

Part of my challenge with cooking turkeys is that I underestimate just how long it takes to defrost 17 pounds of gobbler turned to granite. In the refrigerator, I’ve come to learn, this requires just under seven and a half months. And you’re not supposed to cut corners with poultry, lest you wipe out half the family tree. So fraught is turkey cooking that the USDA has web pages and blog posts devoted to the dos and don’ts. The agency even keeps its meat and poultry hotline open on Thanksgiving morning for last-minute queries. If you need to quick-thaw a turkey, the agency suggests submerging the bird in cold water that you change every 30 minutes. Who in the world has the time to give an iced-up hen two spa treatments each hour? I AM NOT ENCOURAGING YOU TO DO THIS — but I will tell you that I’ve thawed a turkey frozen as hard as Hanging Rock in record time in a five-gallon tool bucket filled with water hot enough to scald a dog.

And then there are all the follow-up decisions to make. Honestly, there’s a lot to think about. Are you going to stuff the turkey or cook the dressing separately? Cook the bird in a roasting pan? A roasting bag? Deep fryer? Convection oven or conventional? Is it cloudy or sunny? Did you brush your teeth before or after putting the turkey in the oven? Each decision point is another integer in the complicated formula that leads to a perfectly roasted turkey. It’s simply too much for an English major. I used to rely on pulling the bird when that little turkey popper thingamajig pops, but that’s less than trustworthy. What in the world would make a turkey popper pop? The Wampanoag at the Pilgrims’ feast would never have stood for such a crutch.

So for the past 30 years, my approach has been to smoke our Thanksgiving turkey. With kids and family in and out of the house, I have time to baby the bird and give it a bit more love than a 350-degree whirl of the temperature knob. I make a 50-50 glaze of molasses and thawed orange juice concentrate, and lift the skin all around the breast to fill the pocket with the tangy-sweet moisture. Orange slices on top to caramelize in the long smoke. A frequent basting with the glaze to enrobe the bird in a cinnamon-bun-like stickiness.

Smoking is, by nature, part science and part intuition, and I have everything down pat except for how long it takes to actually bring the dang bird to 165 degrees through and through. Smoking guides are all over the map. Now, I even have to factor in outside temperature, humidity, and wind speed across my back deck. That’s why my hands are stained with turkey juice, salt brine, smears of molasses, sweat, and tears of anguish when the bird gets stuck on 147 degrees and won’t budge.

I’ve since turned to the instant-read thermometer as the ultimate jury and judge of when my task is complete. But I still can’t even make a guess as to when the bird will be ready. Load up on cheese straws and pour some more wine.

I once auctioned off a smoked turkey at a church fundraiser, and the winning bidder gave me the anticipated delivery time for the dinner. I started to sweat immediately — even though it was nine months before Thanksgiving. 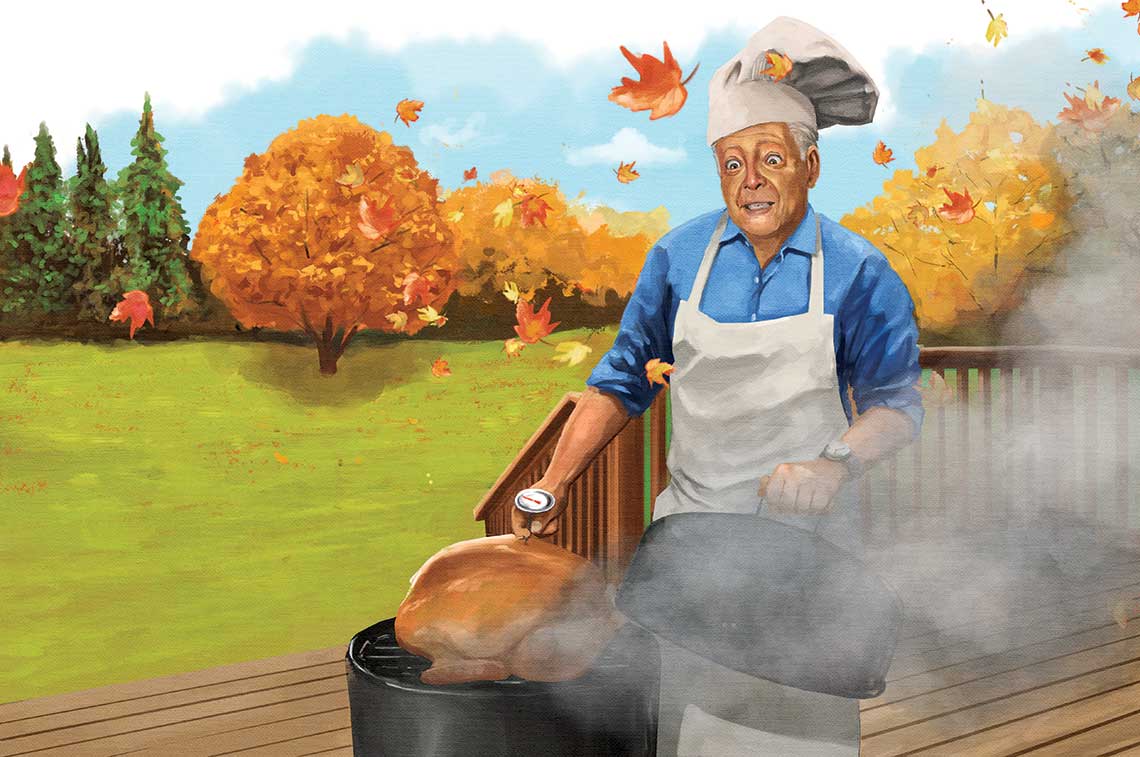 I planned it all out carefully — except for the 25-mile-per-hour winds that swooped down on Thanksgiving morn. I was up and glazing the bird with the sunrise, and carefully calculated enough cooking time to give me 30 to 45 extra minutes or so if I needed them.

I called the winner when I could tell the turkey was running behind. Nothing sucks the heat out of a smoker like a stiff breeze. I called twice and then thrice: It’s getting there, I promise, just a little longer. When you cook a bird that long, you’d better cook it good. By the time I delivered it, nearly two hours late, the family of four was sitting around the table in matching Grinch pajamas. Talk about feeling guilty. It wasn’t until later that I learned that it was a tradition in their family to eat Thanksgiving dinner in their PJs, and that made me feel a little better.

But I’ll tell you this: They loved that turkey. Said it was the best they ever had, and worth the wait and then some. That’s why I’ll always smoke my Thanksgiving turkeys, even if it means suffering the stares of my famished zombie family. There’s something nearly magical about the interplay of smoke and sweet and brine and bird. And time, no matter how long it takes.

Of course, the real magic, my crowd would say, would be to time the turkey so that it’s ready within the same moon phase as all the trimmings. Tough crowd. Where’s Norman Rockwell when you need him?