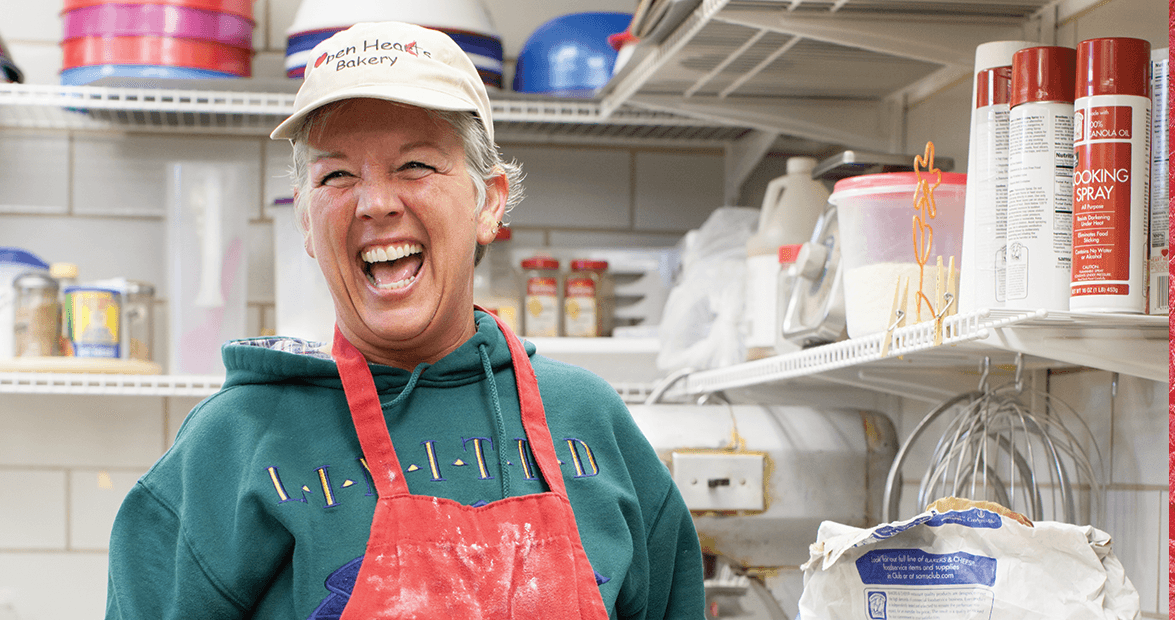 In the basement kitchen of the St. Matthews Church fellowship hall in Morganton, there are two convection ovens, two gas ovens, a six-burner stove top, and a flattop grill.

Sometimes there are 24 loaves of sourdough bread baking in one oven, and 10 pies baking in another. From 7 a.m. until 11 p.m. nearly every day, church members bake, wrap, and label food.

One of those church members, Tom Johnson, will be there in the kitchen of Open Hearts Bakery, about 20 hours a week.

About a year ago, Johnson says, something funny happened. One day a man came into the church where the members were selling their goods. There was a table full of cakes, and the man asked, “Is this the blackberry wine cake?”

“This is a church? What denomination is this?”

Then he bought two cakes.

Since 2009, members at St. Matthews Church have run Open Hearts Bakery, a full-scale operation with sales that sometimes top more than $1,500 a week. Members ship muffins and bread across state lines and to Germany and Canada, and the bakery is certified by the North Carolina Department of Agriculture.

Open Hearts is not like most bakeries. Volunteers run it from the church, and all the money goes to missions and projects for local children.

When Heather Kilbourne, the minister, first moved here in 2011, she couldn’t believe the number of members working here. The work schedule frequently lists more than 40 names, and the average attendance of a Sunday morning service is only about 100 people. “This wasn’t a church bake sale,” Kilbourne says. “This was an actual bakery that was running — no Pillsbury piecrusts, either.”

Ophelia Hart, a church member who ran a bakery in Lake Junaluska for 25 years, planned the bakery with the former minister in 2009 to raise extra funds for the church. All the recipes are Hart’s — including the legendary blackberry wine cake — and she’s helped build a loyal fan base around Hickory and Morganton. Customers know that church members take a break in January and February, and only accept special orders during Thanksgiving and Christmas. Many people stock up and store bread in their freezers.

Hart doesn’t do much baking these days. She’s 75 and nearly ready to retire, she says. She helps Michelle Cole, bakery manager, to make sure that bakers are following recipes to spec and weighing each muffin, cake, and pie.

Johnson, Kilbourne, and Hart all joke and say that Cole should just set up a cot in the kitchen. She doesn’t have a full-time job and devotes at least 40 hours a week to the bakery, working on production schedules and certifications, baking difficult cakes (her favorite is the Italian cream), and managing the other bakers. “As long as I can bring my pillow, I’ll be OK,” she says.

Each week, Cole helps organize the baking schedule. There are sweet breads, sourdoughs, cakes, a special pie known as the James Pie with four kinds of apples, and the blackberry wine cake — a round, moist Bundt cake drizzled with icing.

Cole splits the baking schedules into different days, and she has everything memorized, including which days she goes to the market to buy the 70 dozen eggs the bakery uses each month.

“Pound cakes on Mondays; Tuesday mornings are sweet breads and apple pies from 7 to 8, specialty pies in the afternoon; sourdough bakers on Tuesday and Thursdays start at 4, and those are all seven flavors of sourdough now,” she says. “Wednesday, we sell.”

And they sell. They sold so much, Kilbourne had to create a committee to decide how to spend the money. The committee calls itself Matthew 25:40 after the verse in the Bible, which reads, “And the King will answer them, ‘Truly, I say to you, as you did it to one of the least of my brothers, you did it to me.’ ” The committee allocated money for different projects around Morganton, used funds for missions to Africa, and built a learning lab in the basement to tutor elementary students.

These kinds of projects are exactly what Hart hoped for when she first began planning the bakery. And she thinks about the personal relationship between baker and customer. “Here this person is taking something into themselves I have made with my hands,” she says. “I just feel like it ties us together.”