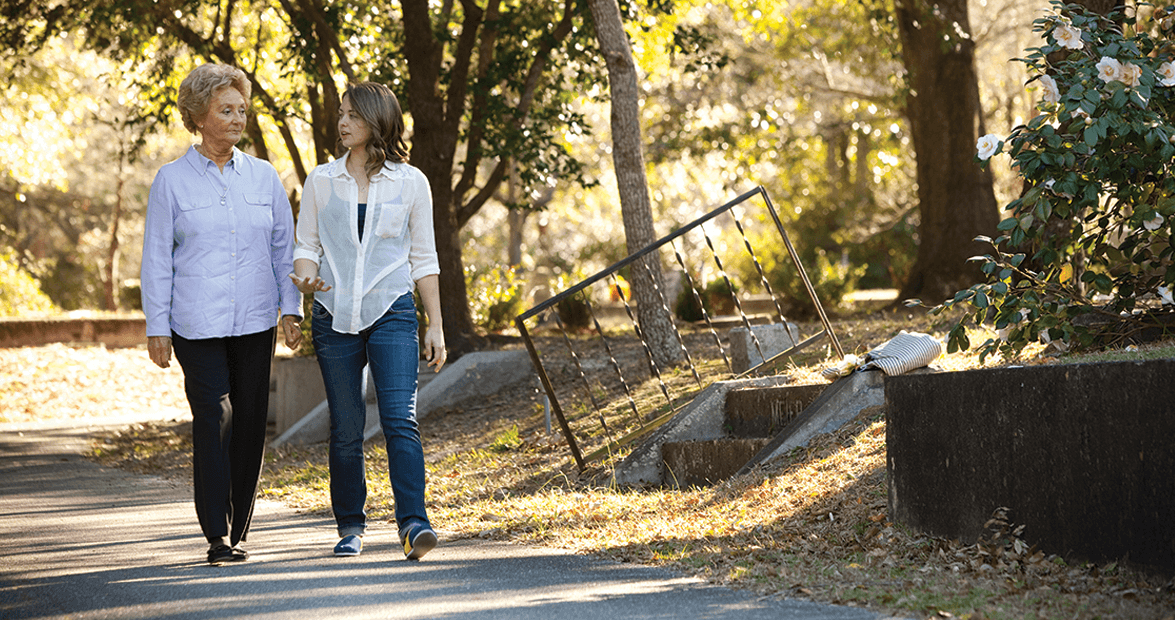 Editor’s Note: This story was originally published in March 2013 and updated in December 2017.

It was always on Sunday.

Each week, Sylvia Stoudenmire and her dad went to the waterfront in Wilmington to check on his tugboats moored at the Cape Fear River. Then the two of them went to pick up Mama Fanny, Sylvia’s grandmother.

They brought her home to a house full of grandchildren and ate a Sunday lunch of roast, rice and gravy, potato salad, and collard greens. Then the whole family piled into the car and drove toward 15th Street, to the cemetery called Oakdale.

They went to visit the grave of Mama Fanny’s husband, Sylvia’s grandfather. He was a railroad man taken down by a bad heart at age 32. Mama Fanny sat beside his grave and regaled her six grandchildren with stories of their family.

As they listened, Sylvia and her siblings raked, picked up sticks, and cleaned their grandfather’s headstone before Mama Fanny led them on a tour. They walked through one of the most historic cemeteries in the South, a place reminiscent of an English garden, where camellias bloom as big as a grown man’s fist.

Mama Fanny would point to a dog, a statue of a Confederate soldier, a mausoleum, and a marble angel sitting on a bench near a yaupon tree, and she’d tell stories, colorful tales of Wilmington’s powerful and poor, famous and infamous — all buried under Oakdale’s muscular oaks and ornate sculptures.

Eventually, she’d make her way to the back of the cemetery. Here she’d sift through the cemetery’s huge trash pile for discarded vases and baskets she could use in the flower shop and beauty parlor she ran from her home. Sylvia always helped her.

Sylvia was 8 years old when those Sunday visits started. After Mama Fanny died and was buried next to her husband, Sylvia kept going to Oakdale, this time with her four children and her mother and father, and she rounded up more stories of all her kin buried here — 36 relatives.

And Sylvia’s mother made sure to give her daughter a piece of important advice.

“When you come out here, make sure you clean,” she told her daughter. “I don’t want any birds pooping on my headstone.”

Eric Kozen is Oakdale’s superintendent. He knows Sylvia’s story and so many more like hers.

“You develop relationships with these people, and you can set your watch to when they come,” Kozen says. “They tell you stories, bring you cookies, and you become part of their family, their circle.”

For the past decade, Kozen, 49, has presided over the 100 acres at the end of 15th Street. He and his four full-time employees have mowed, pruned and cleaned Oakdale’s every inch.

Kozen met his wife here, and he has used his 31 years in the horticulture business and his work as a site manager at Arlington National Cemetery to polish a gem of a cemetery.

At least 20,000 people have been buried at Oakdale — so far. Oakdale is still an active cemetery and has nearly 100 funerals a year. It has burial space for generations to come.

The first person was buried at Oakdale on February 5, 1855. She was a little girl named Annie, the daughter of the cemetery’s president. She was only 6. On her gravestone sits a lamb above an inscription that reads, “Our Little Annie.’’

So much said in so few words.

Narrow roads and grassy paths rise and fall along plots bearing the letters of the alphabet. Sculpted gravestones and oaks bearded with Spanish moss look like sentinels in a garden where the only sounds often are the singing birds.

Kozen has seen a 10-point buck, a red fox, and a blue heron walking through the front gate like he owned the place. He’s nicknamed the cemetery’s barred owl Hootie, and he waits for the cedar waxwings that visit the cemetery every February when the holly berries start to ripen.

But the cemetery gets all kinds of visitors.

Once, a man from Georgia discovered from a scribbling on a picture that one of his ancestors was buried here in an unmarked grave. That ancestor was a Union soldier, a prisoner of war who was brought from the infamous Andersonville Prison in Georgia to Wilmington, where he died of dysentery.

His name was William Broughton, and on a hot Sunday afternoon in June 2004, two dozen people from as far away as Florida, Pennsylvania, and England came to give Broughton a proper burial. One of those people was Gretchen Sayre.

The next morning, she came to see Kozen.

“I’ve never done this before, but will you go out to dinner with me?” she asked Kozen.

Sixteen months later, they were married.

Kozen has run into his share of strange-but-true stories He’s never seen a ghost. Or won’t tell anyone if he has.

But Oakdale didn’t grow out of love, not exactly. It grew out of necessity. In 1852, the church cemeteries were getting too crowded, and Wilmington needed a place to bury its dead. So, a few prominent businessmen bought 65 acres for $1,100 east of town.

Then, Wilmington was North Carolina’s most populated city, with about 10,000 residents. With that purchase, Wilmington became one of a handful of cities nationwide — and the first in North Carolina — to engage in what’s known as the Rural Garden Cemetery Movement.

Cemeteries became public gardens, and at Oakdale, families brought flowers from their homes and their plantations. They planted camellias, azaleas, and wisteria at the plots they bought for no more than $75. 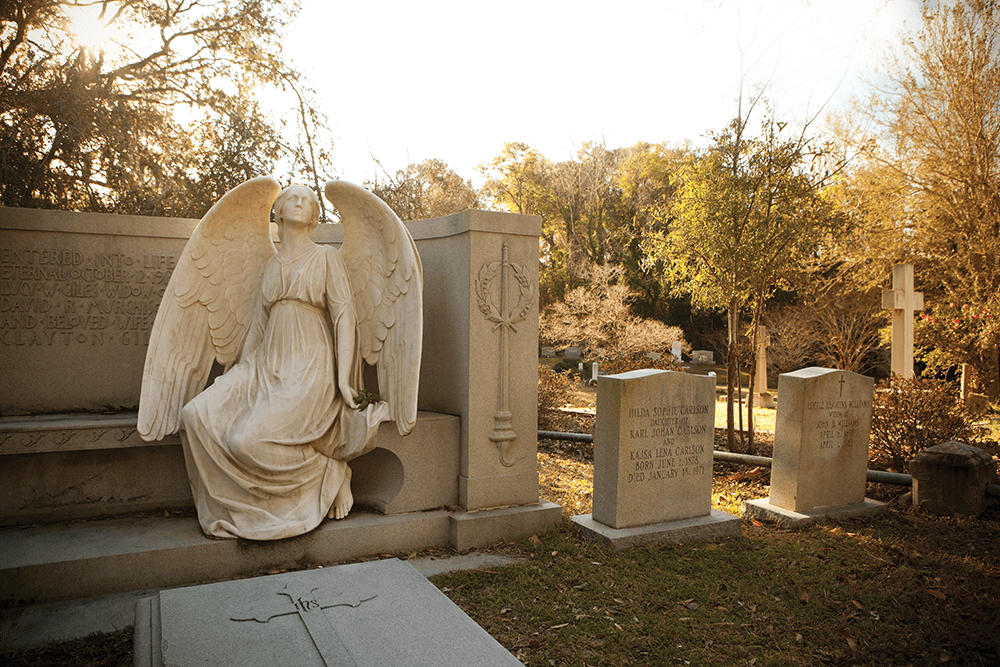 “Cemeteries changed from feeling creepy to being more romantic,” says Janet Seapker, Oakdale’s historian. “You get these elegies, poetry, this sweetness of death in which people wanted to be drawn into another world, life beyond terra firma. People wanted a beautiful place to bury their dead.”

And to honor their history.

Everywhere in Oakdale are names that made Wilmington — the Camerons, the Murchisons, the Bellamys, the MacRaes, the Sprunts. Buried at Oakdale is Ruth Faison Shaw, the originator of finger painting; Edward B. Dudley, North Carolina’s first popularly elected governor; and David Brinkley, the famous broadcaster.

On a hill, a life-size statue of a Confederate soldier from North Carolina stands with his rifle cocked. He oversees the final resting place of 367 Confederate soldiers, dedicated on May 10, 1872, to “perpetuate the deeds of the brave.”

Four Confederate generals are buried here, as well as Confederate spy, Rose O’Neale Greenhow. She was trying to escape a blockade when her lifeboat capsized off Fort Fisher. She had $400 worth of gold coins, bound for the Confederate treasury, in a satchel around her neck. She tried to swim. She couldn’t. She drowned.

Her grave is a few steps away from the grave of Henry Bacon, the architect who built the memorial to honor Abraham Lincoln. A recent visit found her grave framed by seven Confederate flags and decorated with 27 Lincoln pennies.

On a slight rise of land is the communal burial site of about 400 people who died in Wilmington of yellow fever during a three-month span in 1862. Wagons carried dozens of corpses to Oakdale Cemetery, killed by what the Wilmington Journal called the “grim monster.” By the time it abated, the newspaper declared, “General Yellow Jack is no more. He has finally yielded. We must say he has died hard, the fate of a sinner.”

Kozen recruited local Boy Scouts to plant 10,000 yellow daffodils to honor the hundreds of nameless killed by “General Yellow Jack.” When they bloom, the daffodils turn the section canary yellow.

Beyond the notorious and the noteworthy is the deeply personal. At Oakdale, gravestones feel like the first few pages of a family Bible.

A baby named Willie. He died at 1 year, 6 months, 13 days. His epitaph reads: “All is over, suffering ended. Now, our darling is at rest.”

A son named Bruce. His gravestone has the opening notes of his favorite song, “Morning Has Broken.”

A family named Baker. Nine family members were buried here during a 10-year period between 1862 and 1872. Their graves were unmarked until 2005.

And there’s Preston Moses and his sister, who paid to put a granite marker on the family grave site. The slabs weighed 8,000 pounds apiece, situated in their proper spot with a boom truck.

The company that made the slab loaned its truck to Moses, and Moses drove the four-ton slab from Georgia all the way to Wilmington. He wanted to carry out what his mother, Florence, and his aunt always wanted to do: Honor the ancestors who couldn’t afford to buy a gravestone.

“I can’t help but think my mother and my aunt are smiling down from heaven, saying, ‘We’re proud of our kids; you did the right thing,’” says Moses, 71, a retired naval commander.

“We did something they were interested in and carried it a step further so grandkids, great-grandkids, and great-great-grandkids who ask, ‘Where did Florence Moses come from?’ Now they know. They can find out who they are.”

Sylvia Stoudenmire is 75 now, a grandmother and great-grandmother. She has her grandfather’s railroad hat, railroad watch, and his blue-and-white striped railroad jacket.

She goes to Oakdale to clean her grandfather’s grave, Mama Fanny’s grave, and the graves of her mom and dad. She remembers her mother’s request: “I don’t want any birds pooping on my headstone.”

She does other things, too. She’s a member of the Friends of Oakdale, a volunteer group, and she helps tie the bows at Christmas, sets out the flowers at the cemetery’s gates, sells tickets for the walking tours, gives tours, and carries bottled water for anyone who needs it.

Meanwhile, she carries on the legacy of Mama Fanny.

Sylvia started taking her granddaughter, Madison, to Oakdale when she was 4. They would have lunch, and Sylvia would tell the stories she heard from Mama Fanny.

Madison is 21 now, and loves going to Oakdale.