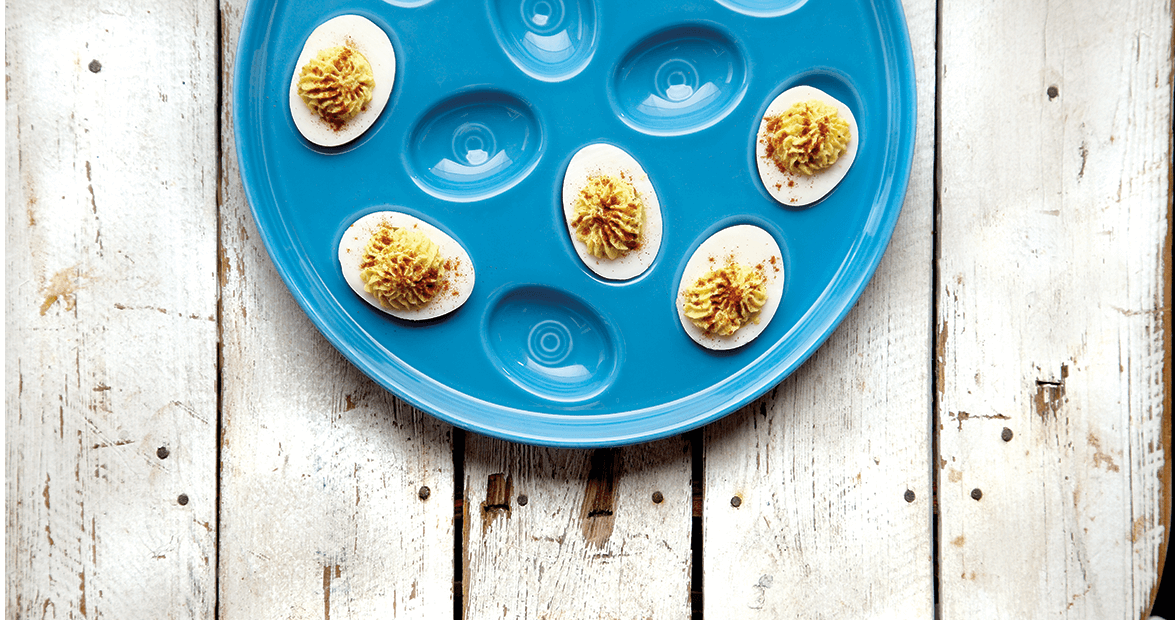 No other Southern food, not barbecue, not fried chicken, elevates the dish upon which it is served.

But the deviled egg does.

And no other piece of china has become such a powerful symbol of Southern women.

Listen to four women who know. Debbie Moose, a food writer in Raleigh who wrote a book called Deviled Eggs: 50 Recipes from Simple to Sassy, says, “My mother said there are two things that a Southern woman always got for wedding presents: a hand-crank ice cream maker and a deviled egg plate.”

Susan Perry, who worked for years at Crook’s Corner, La Residence, and Savory Fare Catering, has a collection of 40 egg plates displayed in her Durham home. She gives them as gifts to newborn girls because she believes all Southern women should be given a deviled egg plate at birth. “Deviled eggs are the first thing to go at a party,” Perry says. “So you better have an attractive empty plate.”

Liz Williams, the director of the New Orleans-based Southern Food and Beverage Museum, says that when she turned 21, her mother marked her daughter becoming an adult by giving her a deviled egg plate and saying: “You can’t entertain without one of these.”

Williams’s mother wisely chose a simple, white, ceramic plate, so it would not clash with her daughter’s future china pattern. The fact, Williams says, that any young Southern woman could order a deviled egg plate in her chosen china pattern “tells you how ubiquitous the dish was.”

Replacements, Ltd., a Greensboro company that sells new and vintage dishware, has egg plates in more than 100 patterns, including Spode, the high-end English china maker; the popular, American-made Lenox line; and a $160 platter in the Capistrano pattern by the Red Wing china company.

The egg plate’s popularity peaked in the 1950s, says Keith Winkler, a product marketing manager at Replacements. But Winkler says he has seen a resurgence. Within the last decade, Fiesta ware has added egg plates to every new color it introduces.

Whatever the design, Marie Lawrence likely owns it. The 58-year-old Morehead City woman has what may be the largest collection of egg plates in the country: 820 and counting.

“It’s a miniature egg-plate museum in my house,” she says.

About 15 years ago, Lawrence bought her first — a white swan-shaped one — at an antiques store in West Jefferson. “It started my madness,” Lawrence says. Since then, she’s cleared out a 10-by-10-foot former craft room to showcase her collection. Her husband built shelves along the walls, and there are glass display cases in the center of the room.

“There’s not two of a kind in that room,” says Lawrence, who has plates from Italy, Germany, Poland, and Spain. She keeps a book documenting where she bought each plate and when, if it was a gift, and any history she knows about the dish or the manufacturer. Once she hits 1,000, she plans to seek certification of her collection as the largest in the world from Guinness World Records.

Until then, Lawrence loves to show off her plates. She has invited tour groups into her home, and she recently played host to a group of senior citizens enjoying a field trip from their retirement community.

She, of course, set out some deviled eggs.