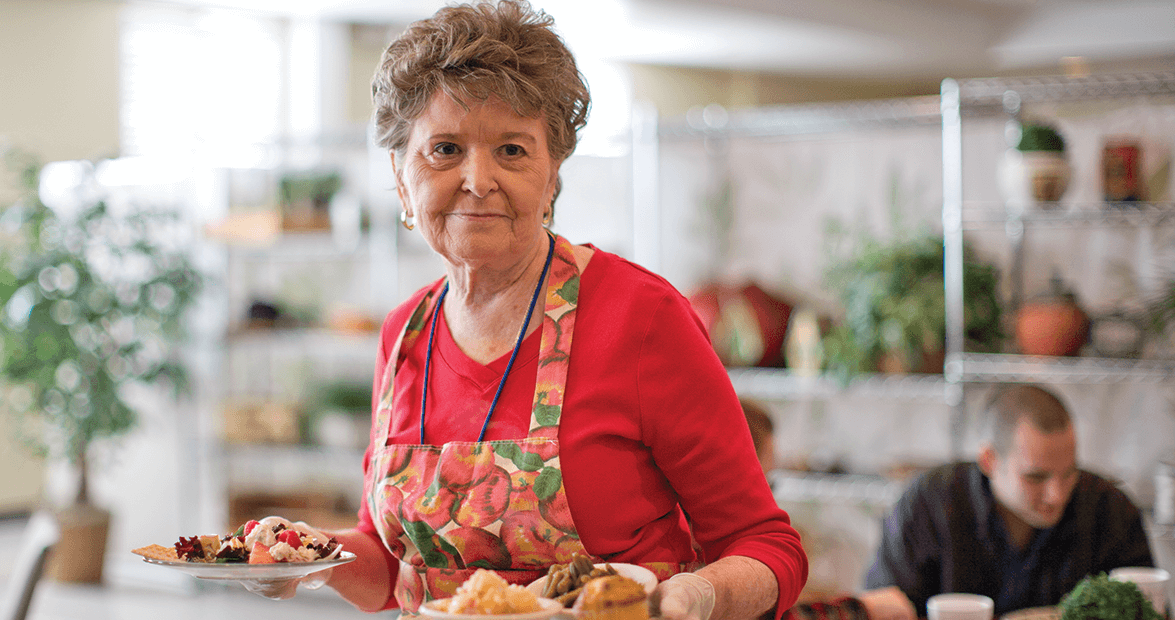 As a line of hungry people forms, chef Steve Spivey rushes around his small kitchen.

“I’ll have the chicken salad on a croissant.”

“Just the salad bar for me.”

The orders flow in, and for the next hour and 45 minutes, Garden of Eaten Cafe is in business.

The cafe, open Monday through Thursday from 11:45 a.m. to 1:30 p.m., is housed in the fellowship hall of First Baptist Church in Hickory. Right on the edge of downtown, the large, brick church with its brilliant-white steeple lends the cafe its established reputation in the community.

Inside, Christian music plays softly as people talk around large tables. The Garden of Eaten is the church’s way to reach out to the community, by offering people a comforting atmosphere where they can take a moment out of their day to relax, catch up with friends, and enjoy a home-style meal.

Spivey, a self-taught chef from Jacksonville, Florida, came up with the idea for the cafe. He was working as a food-service director at a church in Florida when he saw a similar position open in Hickory.

“I really feel like it was a road God was sending me down,” Spivey says. “He showed me a way to use my talents for his good and to glorify him. And to be able to do that is just a major blessing. I would hope to do nothing other than work in a Christian setting where food can be a ministry.”

Spivey could work as a chef in a big, fancy restaurant. But he knows the blessings the ministry brings him are much more rewarding than any salary or culinary accolades.

Spivey came to Hickory about three-and-a-half years ago when the food-service director position opened at First Baptist Church. In Florida, Spivey visited larger churches in Jacksonville and Orlando that had similar cafe concepts. He felt the cafe would work well at First Baptist because of the church’s ideal location in downtown Hickory.

“Idealistically, we want to think of churches as always being open,” Spivey says. “But if you don’t attend the church, it can be a scary concept.”

“We all know how it is,” Reynolds says. “We think, ‘I’m not a member, so I don’t want to go in.’ But for a Mediterranean ciabatta, you will.”

Spivey and Reynolds think that a fellowship hall cafe open to the public is one of the best ways to invite nonmembers into the church. The Garden of Eaten draws a varied crowd, including downtown businessmen, women meeting for lunch, and church employees. Several clubs and organizations now hold their gatherings here.

“It’s all about meeting people where they’re at,” Spivey says. “We don’t go to everybody’s table and pray with them, lecture them, or give them literature. All we want is to provide a place where people feel welcomed while enjoying a relaxing lunch. Food plays an important part in people’s lives, and we’re hoping to reach out by satisfying the basic need of being fed.”

Holding the cafe in the fellowship hall helps not only to welcome the community into the church, but also to bring the community together. The smallest tables at the cafe seat six people. Spivey likes that customers have the chance to socialize with someone new.

“There’s no better way to get to know people than eating with them,” Reynolds says. “When you’re eating together, there’s a lowering of tension and a feeling of fellowship. There’s a commonality. We’re all hungry, we all need to be fed, and we all appreciate good food. It removes a lot of barriers, and it draws people together.”

In addition to providing people with a comforting place to have lunch, the Garden of Eaten also benefits outreach ministries in the Hickory community. Money raised from serving lunch supports First Baptist’s other food ministries, such as the soup kitchen and City Kids program, which helps local underprivileged and potentially at-risk children.

‘Some of the nicest’

When you eat here, you feel like someone is doing something nice for you, too. Someone is offering you a break from fast-food lunches. Someone is taking time to prepare your weekday meal. Someone is providing a space for you to talk to your neighbors.

And Spivey likes to keep the menu interesting for frequent customers. Favorites include homemade chicken salad with grapes and walnuts; the “Applewich,” a grilled cheese with Swiss, cream cheese, ham, and apple slices; and daily specials, like chicken breast stuffed with caramelized apples, dried cherries, and Italian cheese. The menu has staples, but the daily specials, soups, and salads change with the seasons. Visit in the spring or summer, and you’ll see a strawberry salad. In the fall, expect creamy, pumpkin soup.

Spivey uses fresh ingredients, and every meal is homemade.

“This is God’s house, so the food should be some of the nicest,” he says.

Carol Wolfe, a customer since the beginning, visits at least once a week to have lunch with her mother and friends. The women sit at a large table and talk about their club meetings, workout plans, and choir practice. They get their food quickly, but they take a leisurely amount of time to enjoy each other’s company.

They feel good after eating a meal at the Garden of Eaten, and it’s not just because of the food.

As the lunch rush slows, Spivey looks around the cafe. A few customers linger. Lunch is almost over, but they can stay as long as they like. He’s just happy they came through the doors.