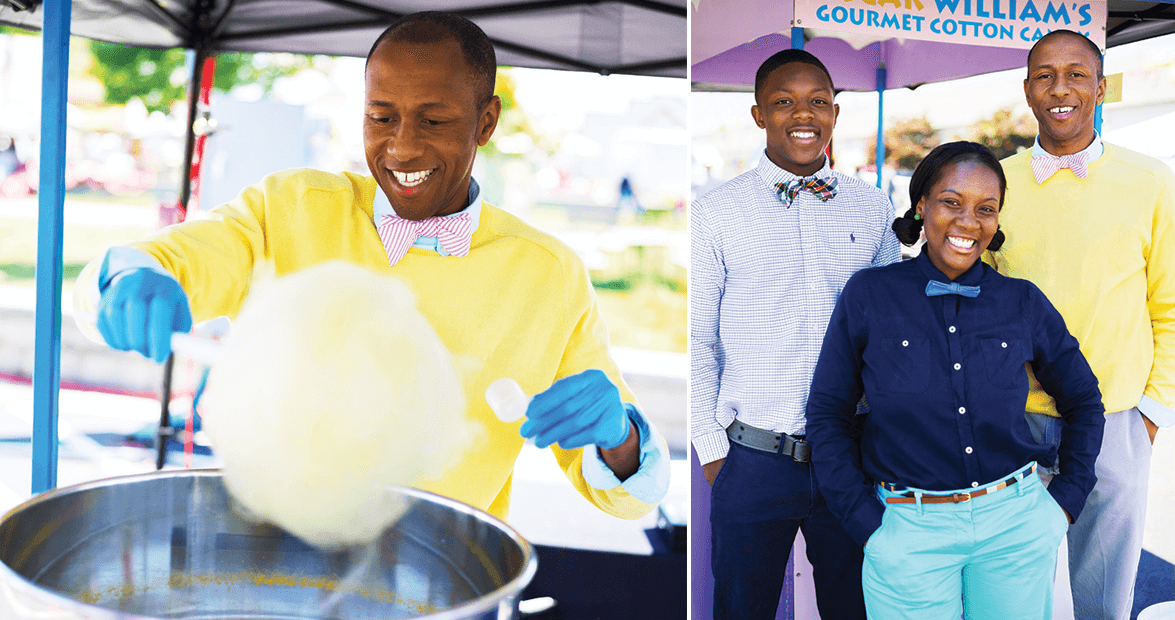 I used to have a lot of vices before I learned how to turn them all into virtues. Red wine is so good for the heart. The Caveman Diet, which includes everything I eat anyway, is how I stay in shape. Now, I can add cotton candy to that list. Thanks to Tasha and William Kornegay, cotton candy — or fairy floss, as some call it — has left the midway and found a new home in the suburbs of Raleigh, Apex, and Cary. And though it’s not exactly health food, I can eat their cotton candy knowing that this is the closest spun sugar will ever get to kale, at least in my lifetime.

William and Tasha — he’s from Mount Olive, she’s from Durham — are vegan. Their cotton candy is certified organic, kosher, gluten-free, with no artificial food coloring. You can have it at a birthday party, at a corporate function, anywhere you want to have a showman like William spinning sugar like a magician pulls a rabbit out of a hat. He has mad cotton candy skills, and Tasha could charm a charging rhino — an essential talent, as the lines can be long, and a 10-year-old’s patience is quickly worn thin.

This was not the career path they thought they were on. Tasha works in mental health, and William is in marketing. They met 15 years ago while working in the school system. She moved to New York City — a youthful whim — but they stayed together. William avers that there was only one day in the past 15 years that they didn’t talk, and that was during the New York City blackout in 2003. Everything changed after Tasha returned and, trying to raise money for HIV research, rented a cotton candy machine and took it to the Peak City Pig Fest in April 2013, where it thrilled the porcine-loving crowds.

It is a truth universally acknowledged that a beautiful woman with a cotton candy machine must be a great idea. It is. Tasha and William are in the second round of a show called “Shark Tank,” which gives budding entrepreneurs seed money to expand their business. But how much money do they really need?  Cotton candy is made of air and nostalgia; the sugar just makes it sweet.