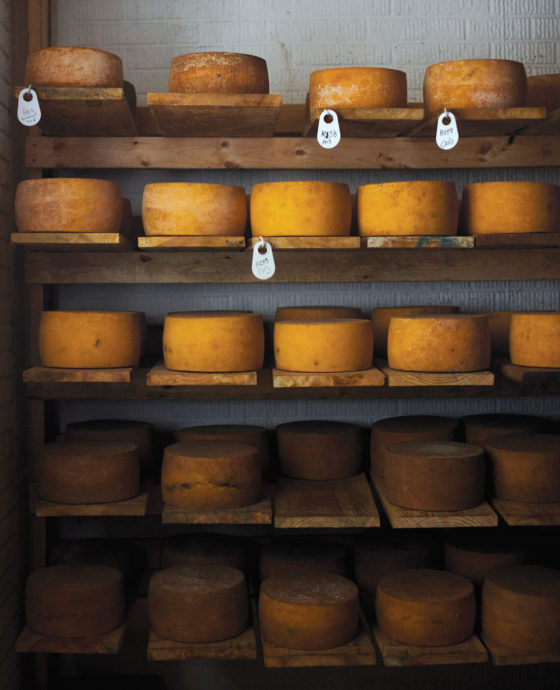 In this monthly online series, we ask the experts to go in-depth on some of our favorite topics from the magazine.

From soft and creamy chèvre to sharp and tangy Cheddar, North Carolina knows cheese: Across the state, nearly 40 artisan and farmstead cheesemakers are turning milk into magic. If you’ve never branched out from big brand-name cheese, consider this a sign.

We talked to Nathan and two other experts — Carrie Bradds, co-owner of Goat Lady Dairy in Climax, and Rachel Klebaur, owner of Orrman’s Cheese Shop in Charlotte — to find out which North Carolina cheeses they covet and the cheesy dishes they crave. With our help, you’ll be king or queen of the charcuterie board.

Let’s start with the basics. What are some flavors that define a good cheese?

Rachel Klebaur: Each cheese might have one particular style — it might be more buttery, or have more of a cooked-milk flavor, or be more musky — but on the whole, what I’m looking for is a cheese that’s really well balanced. It’ll take your palate on a roller coaster ride of different flavors: a little bit tangy, a little bit milky. You feel a nice amount of salt throughout. It’s not lacking in any one flavor, and they all combine nicely. I think that’s what makes a great cheese — not necessarily a particular profile, but a cheese that is really well balanced.

Carrie Bradds: Well, for me, it’s more of what it doesn’t taste like. You know, a lot of people equate goat cheese with tasting like a billy goat, and I think it’s important that we do everything we can to keep that out of goat cheese. For a lot of people, if that’s their first time tasting goat cheese, then they’re never going to put it in their mouth again. I like to explore all the flavors, but if I get that off flavor, I don’t want any more of it!

Rich Nathan: I think complexity, different layers. When I first put a cheese into my mouth, I always look for the mouthfeel, for the different types of flavors. Is it salty, is it umami, is it fruity? I tend to prefer cheeses that have a lot of boldness and complexity to them, which typically comes from the types of culture you use and the length of aging. Technically, the longer you age a cheese — like with a hard cheese — the more flavor you can coax out of it. I’m a big fan of that.

Rachel Klebaur: This is tough! Some of my favorite cheeses are fresher goat cheeses that have a blooming rind on them, and I love a minerally white wine from the Loire Valley, so I love those pairings. But what’s been surprising me recently is really great buttery cheeses with a California red. Those buttery notes really play nicely with the berry flavor of a red.

What’s your most popular cheese?

Rachel Klebaur: Our truffle Brie. It’s a French Brie that isn’t local, but we kind of doctor it up here with some truffle oil and other things.

Carrie Bradds: Our fresh chèvre with fig and honey. That’s our sweet one; it’s got local honey and fig jam in it.

Rich Nathan: I get a lot of interest in Cheddar — traditional English Cheddar — Manchego, and an aged Jack with a coffee-black pepper rind. That’s the kind of cheese where you get different layers of flavor.

Is there a cheesy recipe you dream about?

Rachel Klebaur: Roasted potatoes and a stinky cheese. That stinky cheese is melted over the potatoes or served alongside the potatoes, like a Raclette dish. But you could use any sort of washed-rind cheese that has that really great melting texture. I’m thinking of a cheese called Hickory Grove from Chapel Hill Creamery — that one melts really nicely for use in this dish.

Carrie Bradds: For family get-togethers, or really any function we have, I make a baked macaroni and cheese where I use our raw cow’s milk Gouda, which is called Lindale, and it’s aged about two years, so it’s pretty sharp. I combine that with our natural-rind goat cheese that’s aged for seven or eight months — that’s what everybody always requests that I make at family dinners.

Rich Nathan: There are three things, actually! Omelets — especially with Gruyère. And pizza that I make on my grill. But I think that my favorite recipe is a macaroni and cheese using different types of cheeses. It depends on what’s available at the time, but I like to use a little bit of smoky Jack, a little bit of a milder cheese — maybe an Appenzeller — and maybe a little Cheddar and Swiss. I vary it depending on my mood.

Cow’s milk or goat’s milk — which makes the better cheese?

Rachel Klebaur: Actually, I prefer sheep’s milk cheese! It’s higher in fat than cow’s milk or goat’s milk, so it has that richness that I really love, and it often has a sweeter note to it. Sometimes it has an herbaceousness — a grassiness — so it has the sweet and savory notes. There aren’t many dairies that produce sheep’s milk cheese in North Carolina — they’re hard to raise — but Three Graces Dairy in Marshall has sheep, and they do a lot of mixed-milk cheeses.

Carrie Bradds: It really depends on what you’re after, but of course I’m going to say goat’s milk, because that’s what we make! When Goat Lady Dairy was developed, people told the Goat Lady, “You’re wanting to do goat cheese in Randolph County? You need to turn and run.” We were actually the second licensed goat dairy in the state!

Rich Nathan: I prefer cow’s milk. It’s the only milk that I can really get on a frequent basis as a non-farmer cheesemaker.

How does North Carolina stand out when it comes to cheesemaking?

Rachel Klebaur: Well, when I think of cheesemaking, I think of green pastures, and North Carolina has a lot of those. We’re situated where there’s lots of rain, so there are lots of great pastures for the animals. And there’s such a wide variety of cheesemaking in North Carolina — different styles. All the cheesemakers have different backgrounds and are producing their own thing.

Who are some of your favorite artisan cheesemakers in the state?

Carrie Bradds: Boxcarr is one. They make mainly a robiola-style cheese, washed rind — what most people would consider a stinky cheese. I love those kinds of cheeses, and I love those people — they actually trained under us for a long time. And Chapel Hill Creamery, of course. They have wonderful cheeses; I love their mozzarella — it’s the best around.

Rich Nathan: Chapel Hill Creamery is a great one. I think they do a really nice job. Boxcarr Cheese is another one that I think does a phenomenal job. Oh, and Goat Lady Dairy!

What do you want people to know about artisan cheese and cheesemaking?

Rachel Klebaur: I think one of the most important things is that there’s somebody making the cheese, and when somebody buys artisan cheese, they’re supporting a small family farm.

Carrie Bradds: A lot of people wonder why it’s so expensive … I wish people would understand that the cost involved and the overhead in our type of operation is huge. In fact, we hand-wrap and hand-pack every piece of cheese that goes out. We send out close to 150,000 to 160,000 pounds of cheese a year. That’s a lot of hand-work.