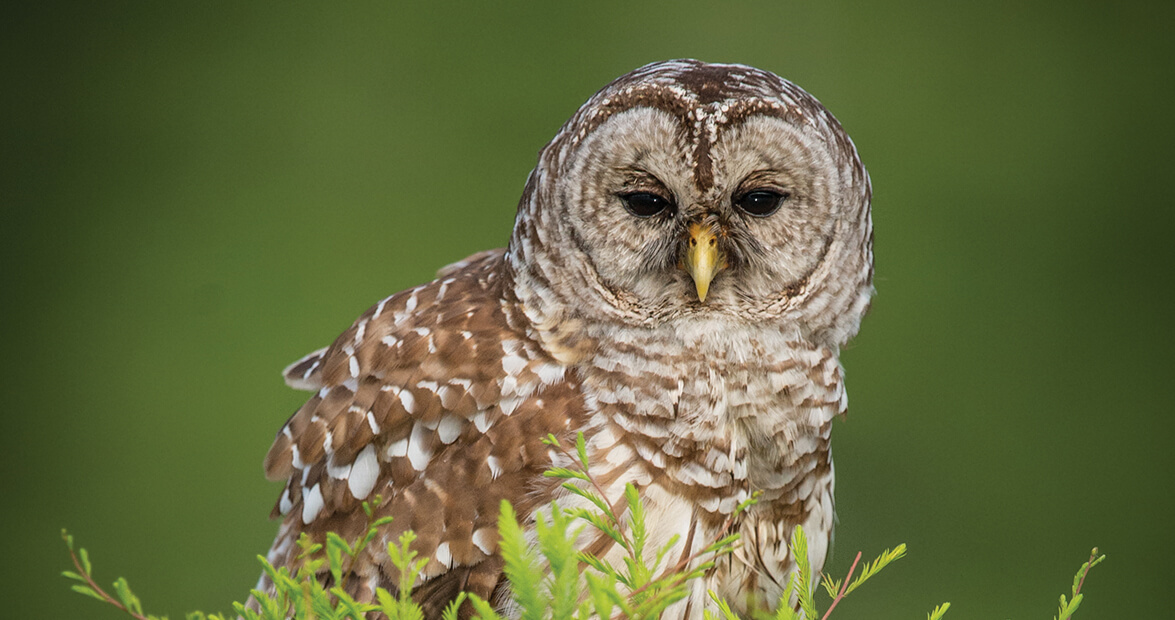 If the old-timers are right, we’re in for a heap of hurt.

They considered the hoot of an owl to be a premonition of unhappy times: Somebody’s in for a streak of bad luck. Somebody’s going to die. If that’s the case, we all better rub a buckeye, because this time of year, the owls are getting downright batty.

On these long, cold nights of January, when most birds have buggered out for the tropics, the owls are out and about like a bunch of kids on an early-release Friday night. Owls are among the earliest-breeding birds. They’re looking to put down roots, and it’s not uncommon for them to conclude that a suburban or even an urban neighborhood is as fine a place to raise a brood as anywhere else. On still winter nights, you can hear the territorial hoot-hooting of great horned owls back and forth across the backyard, a beautiful, baritone duet that echoes through leafless winter woods. It’s a haunting, solemn sound, quite unlike the chorus to come: If you think your kids are whiny and obnoxious around dinnertime, try bringing a dead squirrel to a nest full of great horned owlets. In just a few weeks, their begging shrieks will wake the cat, the dog, and the dead, and who would believe that such adorable bundles of fluff could make such an ungodly racket.

And the barred owls — these bread loaf-size birds sound like they’ve come completely unglued. They call with a familiar nine-note Who cooks for you? Who cooks for you-all? cry, but on winter nights, their breeding songs are more clamorous howl than hoot. Yammering back and forth across creek woods and lakeshores, loud as car horns, barred owls cackle and jabber, monkey-laugh, and squeal like pigs.

Humans have long been fascinated with owls, and the birds’ association with pestilence and doom is hardly new. These taloned, sharp-beaked birds of prey were painted on the ancient cave walls of France. On Mesopotamian tablets 4,000 years old, owls accompanied Lilith, the Sumerian demon goddess. Pliny the Elder figured their appearance “foretells nothing but evil.” Owls shivered the timbers of Shakespeare and Virgil and Ovid, the Sioux and the Pawnee. In the gloomiest of gloom poems, Keats’s epic Hyperion, we hear the “gloom-bird’s hated screech.”

The reason why owls choose winter nights for a little family time makes sense if you’re an evolutionary biologist. Or an owl. Long North Carolina winter nights can get lonely, but a lengthy lights-out gives owl parents plenty of time to hunt and build the reserves needed for breeding. And once the young owlets arrive, long nights make for long teaching sessions without having to compete with the daytime hunters that will soon arrive — the red-tailed and red-shouldered and sharp-shinned hawks, the peregrine falcons and bald eagles. It’s a competitive advantage that turns January nights into the raptor’s version of cruising Main Street after the Friday night high school football game, windows down and stereo thumping. It’s part territorial call, part mating display, part boxing-ring bravado, and all about love. Or as close to love as an owl can get.

So take a moment to step quietly into the backyard in the night, and listen to the tiger owl’s urgent hoots, the swamp owl’s raucous caterwauling. There might be moon shadows on the snow, but this is the first of the spring concerts, a chorus soon to be joined by the wood thrush and bullfrog and meadowlark. It foretells the coming season.

Unless the old-timers were right, and the owl’s song foretells a bad moon rising. In that case, enjoy the free concert. Because, in a few days, we’re all toast.