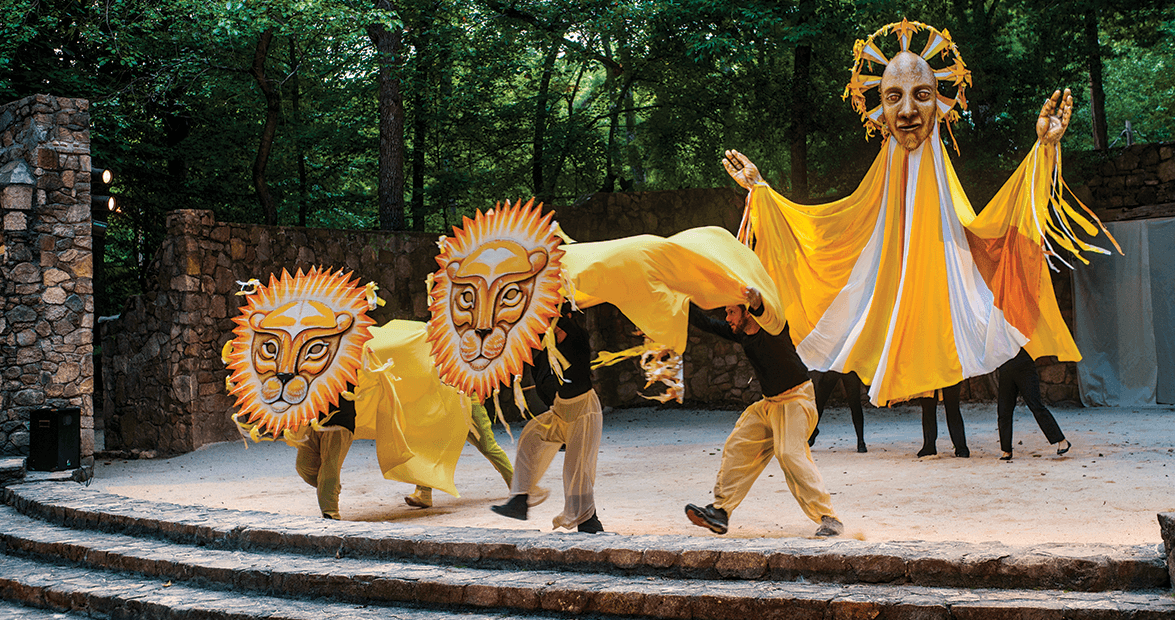 It was approaching dusk, and I was in the Forest Theatre on the campus of the University of North Carolina at Chapel Hill. Three hundred or so other men, women, and children were there as well, sitting in the classical-style stone amphitheater beneath a blue sky slowly fading. The show was about to start, but before it did, a young woman welcomed us and said, with gusto, “Are you ready for some giant puppets?!?!”

Everyone clapped and cheered. But really, who is ever ready for giant puppets? Or enigmatic human faces almost as big as those on Easter Island? Or frogs that juggle? I wasn’t. I didn’t even know that a puppet, by its very nature, could be giant. But it can be. The Paperhand Puppet Intervention has been creating and performing with giant puppets for more than 15 years — although calling these awesome constructions “puppets” is a bit misleading.

When I was a boy growing up in the swampy backwoods of Alabama, puppets were little things animated by tiny hands, but these puppets are huge. They walk and run and dance and fly across and above the stage through the agency of one, two, three, or more entire people, many of whom are manipulating the giant puppet with long poles in a complicated choreography. Putting on a show takes between 20 and 25 puppeteers and up to eight musicians — as well as more than 100 volunteers, who come to Paperhand’s studio in Saxapahaw during the summer to help sew, construct, papier-mâché, and paint the puppets.

The Paperhand Puppet Intervention is a glorious way to spend the early part of an evening. It’s hard to imagine something more family-friendly and evocative for all ages. But there is more to this program than simple entertainment. Its stated mission is “to make work that inspires people [and] promotes social change.” The puppeteers see themselves as artists and activists, as visionaries. “Our vision is inspired by our love for the earth and its creatures (including humans),” their mission statement continues, “as well as our belief in justice, equality, and peace.” 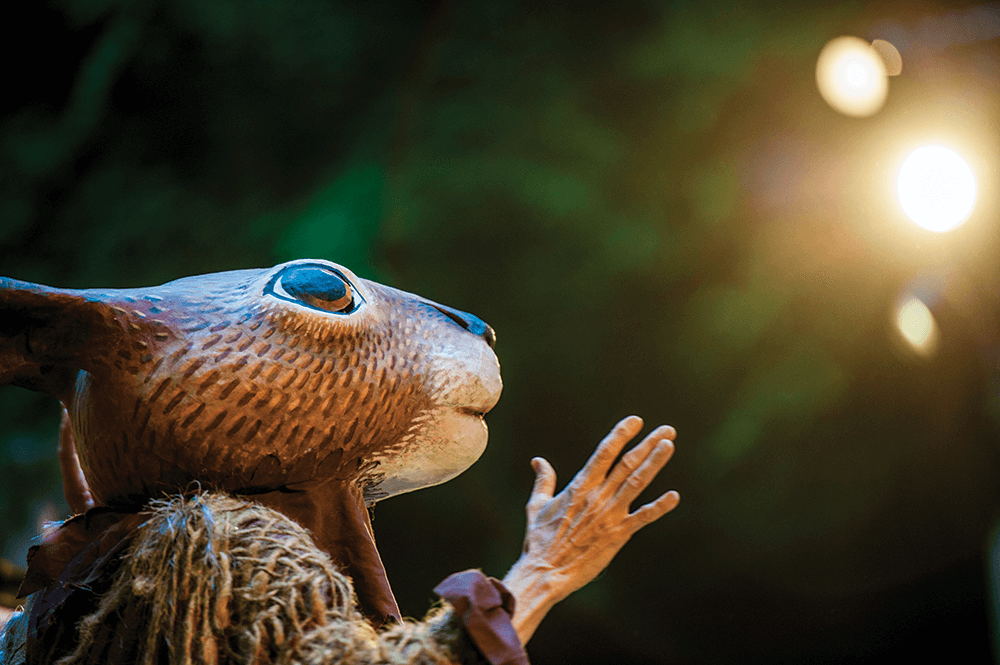 These are the values reflected in the show I saw, “The Painted Bird,” written (as all their shows are) by Donovan Zimmerman and Jan Burger, the founders of Paperhand. It’s about nothing less than creation and earth and our dubious custodianship of it all. Lightly narrated, the story is told through music and images — and, of course, frogs who can juggle and a rabbit who plays a mean fiddle. It’s symbolic, funny, and didactic.

Toward the end of the show, darkness falls and the shadows grow. Giant puppets dance and celestial music powers it all. It makes you consider the name — Paperhand Theater. Zimmerman and Burger came up with it. They imagined a giant paper hand coming out of the clouds and tapping someone on the head and saying, Wake up!

All of us watching were awake. But it felt like a dream, the kind where nothing makes sense, and everything does.