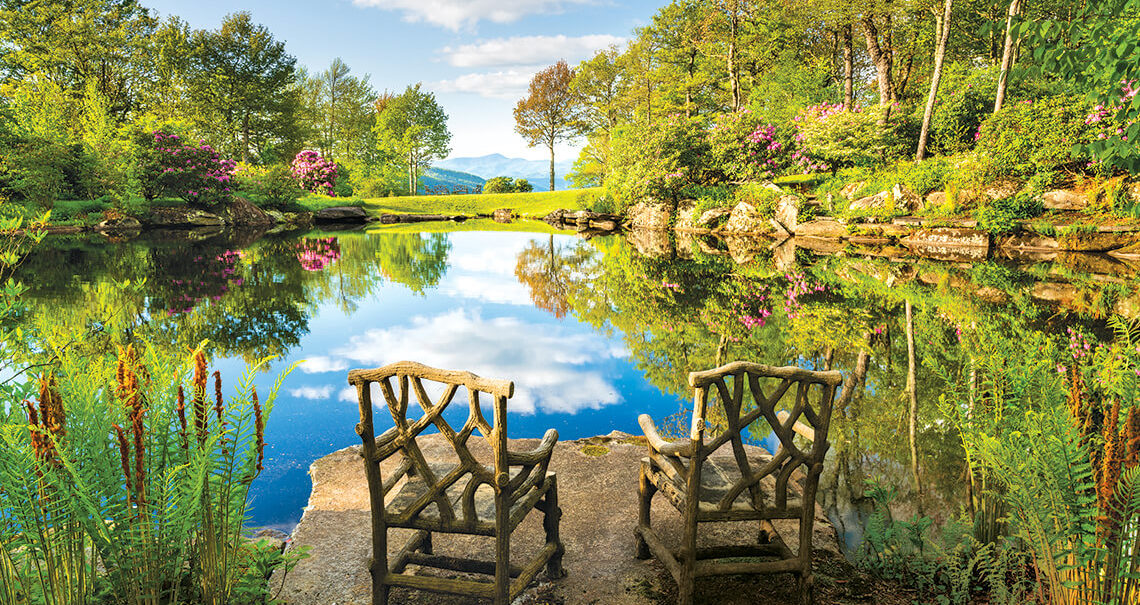 Robert and Betty Balentine each fell in love with the outdoors at an early age: He hiked the North Carolina mountains with his Boy Scout troop; she grew up collecting wildflowers near her childhood home in Tennessee. Both had parents who were avid gardeners. But the Balentines noticed that their own children, growing up in Atlanta, had few opportunities to connect with nature. So the family bought a lot on Toxaway Mountain, and they were stunned by what they found there: It was lush and beautiful, to be sure, but a survey of the land showed that it was also home to diverse plant communities and rare species. The Balentines knew they had to preserve it. Now, 120 acres — once slated for development — are under a conservation easement, and a staff of horticulturists and naturalists research, catalog, share, and care for this slice of the Southern Appalachian landscape. 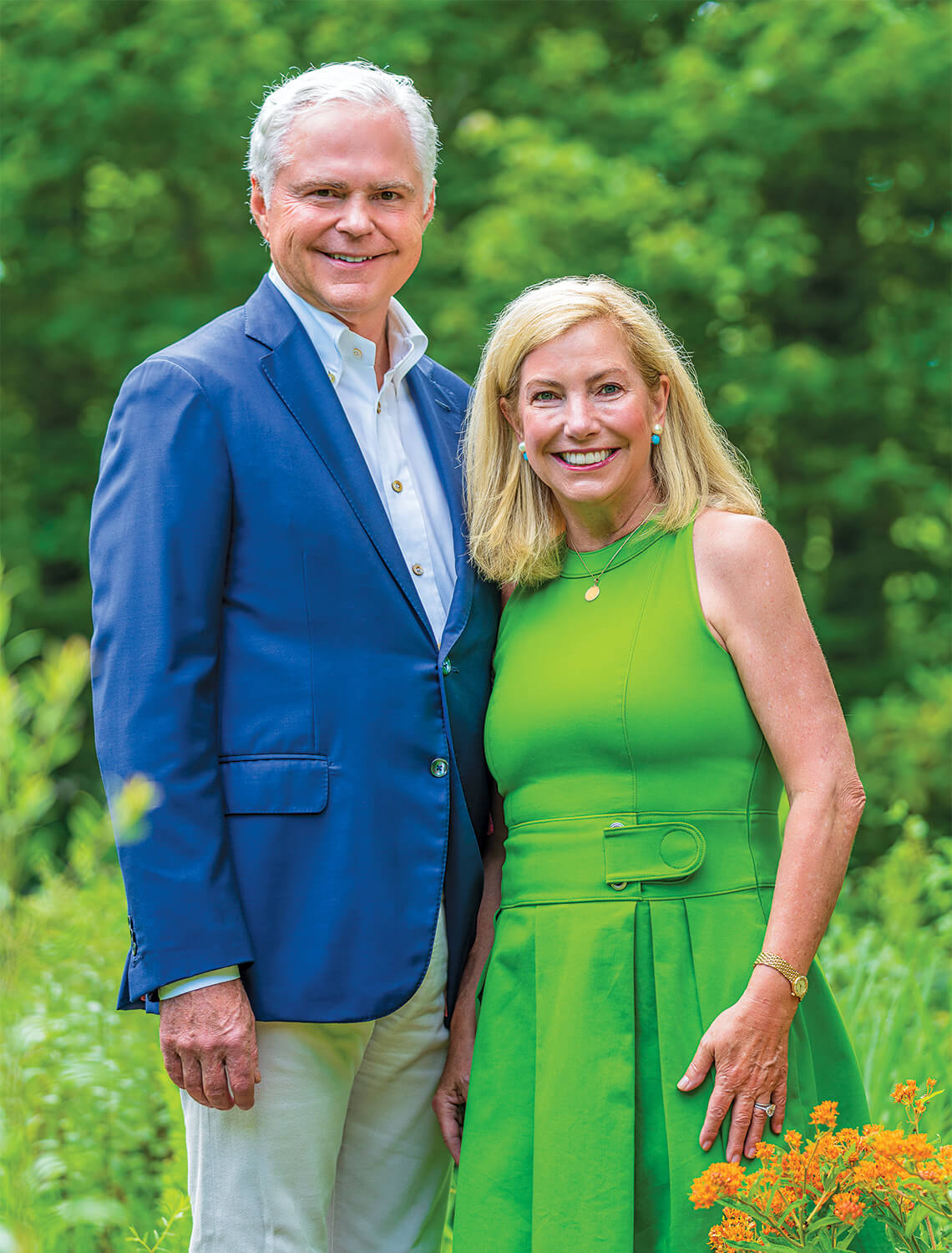 To reflect the spirit of this special place, the Balentines worked with landscape architect W. Gary Smith to create the 22-acre Core Park, a series of garden rooms that showcase native plants of the Blue Ridge. Like everything about Southern Highlands Reserve, the garden rooms are deeply intentional, designed to both educate and evoke an emotional response. This area, the Yellowwood Grove, is a tiny garden room just off the wide-open Viewsite, with its stunning vista of the rolling Blue Ridge. “There’s a shift from vastness to an intimate, enclosed space that feels like you’re being hugged,” Executive Director Kelly Holdbrooks says. Enter through the secret garden doorway, and you’re transported back to childhood, enveloped in the wild woods. 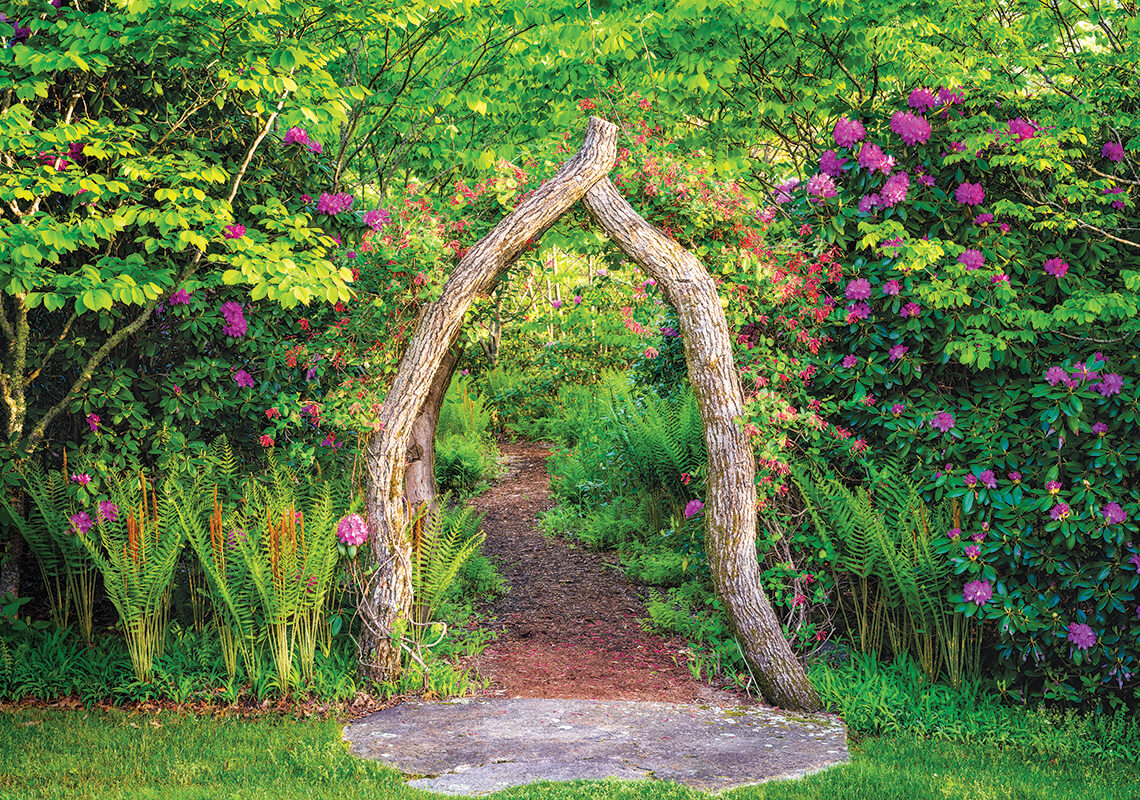 Local artist Jesse Morgan’s locust wood doorway blends seamlessly into a backdrop of cinnamon ferns and rhododendrons, while firecracker-red Major Wheeler honeysuckle happily winds itself up and over the threshold. photograph by Thomas Moors

Once, our mountains were blanketed in spruce trees, a valuable habitat for species like Carolina northern flying squirrels. But after decades of logging, pests, and wildfires, the spruce-fir forest has become the second-most endangered ecosystem in the country, existing only in pockets on the tallest peaks. Determined to expand these “islands in the sky,” SHR staff members collect red spruce cones each fall, extract the seeds, then nurture the tiny trees until they’re ready to go into the ground. Since 2013, they’ve helped plant 4,000 seedlings on public lands, and in their nursery, they’re caring for 4,000 more — the forest giants of tomorrow. 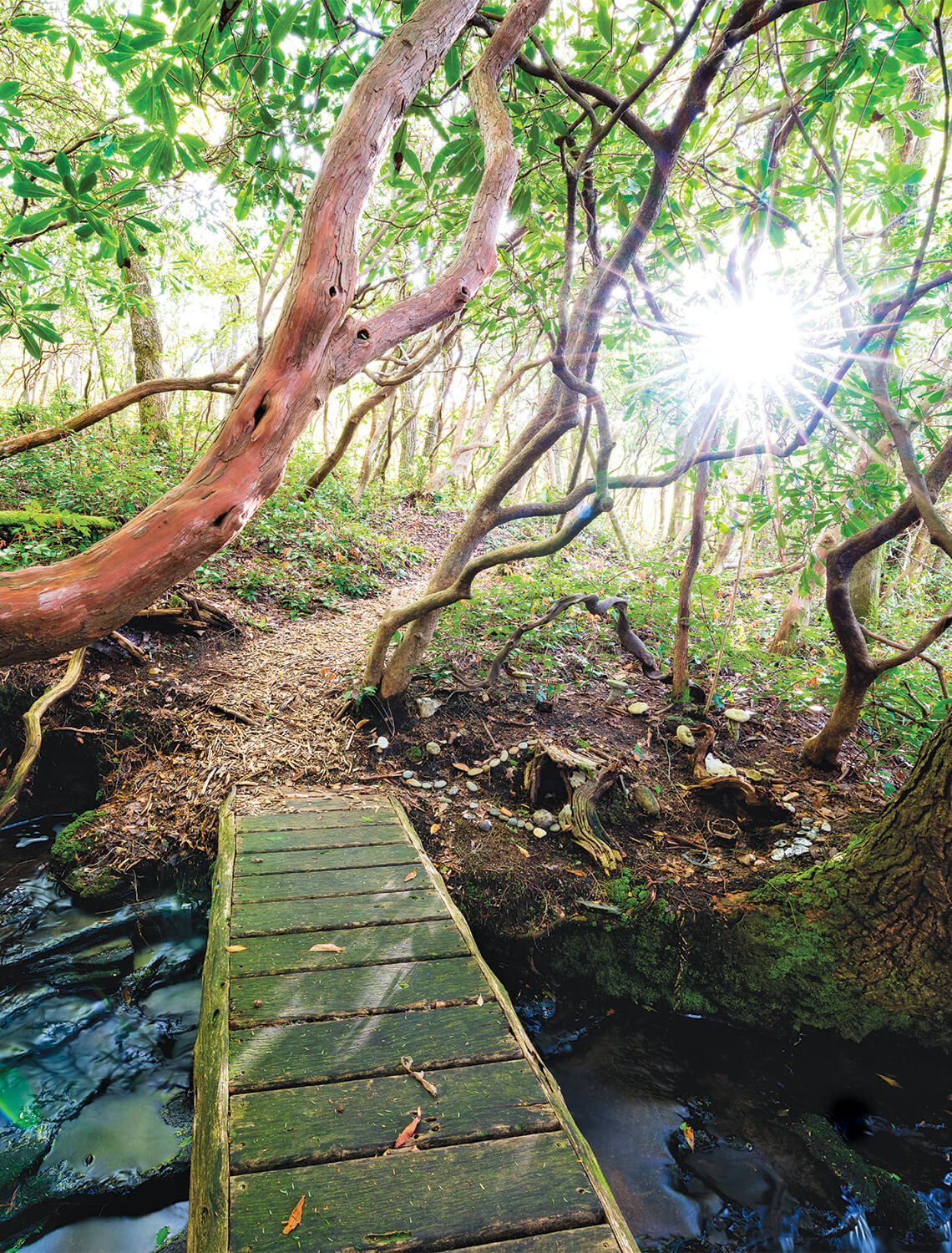 Reserve is a home for all kinds of creatures: When the Balentines’ son, Mac, was small, he and Betty started a fairy garden as a weekend art project; now, Betty and her grandchildren keep things neat and tidy for the fairies. photograph by Thomas Moors

Tucked into a traditional seven-ring wildflower labyrinth is a meditation on life: When the path is clear, it’s easy to cruise on through. But sometimes, things aren’t so simple, and you have to push past the overgrowth and obstacles. A series of stepping-stones helps ease the transition from soft, natural terrain to stone walkway. Then, it’s a quarter-mile to the center — where a bench provides a moment of rest — and a quarter-mile back out. In late summer, when the labyrinth is at its peak, birds, bees, and butterflies swoop through Joe-Pye weed, goldenrod, and Indian paintbrush. “It’s like a kaleidoscope of color,” Holdbrooks says. “It’s just buzzing, literally, with life.” 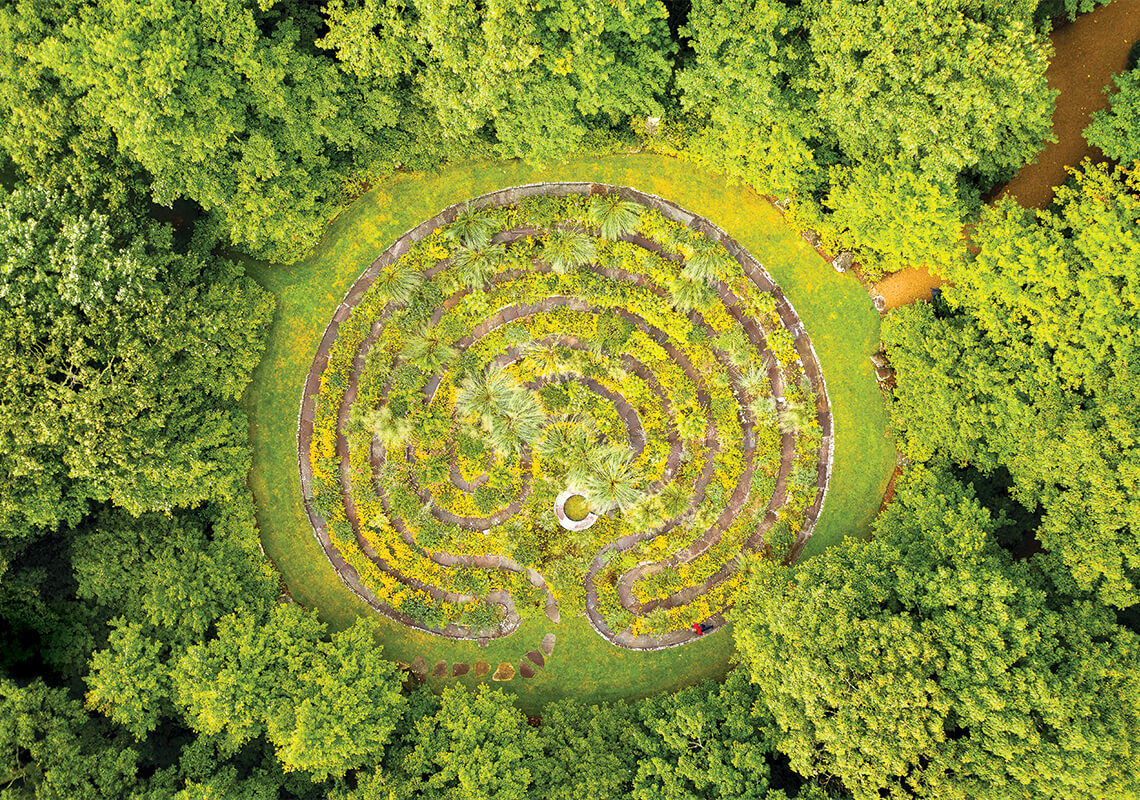 Throughout the labyrinth, ornamental grasses mixed with perennials create a sense of movement. When the wind blows, tufts of heavy metal blue switchgrass wave among golden patches of black-eyed Susans, coreopsis, and yellow false indigo. photograph by Thomas Moors

“The spirit of the place is strong here,” Holdbrooks says. “It feels a lot older up here, and I think that has a lot to do with geology.” During the last ice age, species now found mostly in Canada migrated by glacier as far south as Pennsylvania, then traveled down the spine of the Appalachian Mountains. Today, small communities of those species remain in just a few places, like Toxaway Mountain. But it’s not just geological forces at work: “The culture shapes the land,” Holdbrooks says. “Humans forget that we’re part of the natural cycle, but this has been going on since the beginning of time.” Tours of the reserve always begin with a conversation about culture and land use, going back to the Paleo-Indians who hunted game here 12,000 years ago. Then, a journey through the Core Park helps bring those stories to life, and Holdbrooks hopes that visitors leave inspired to use land wisely. 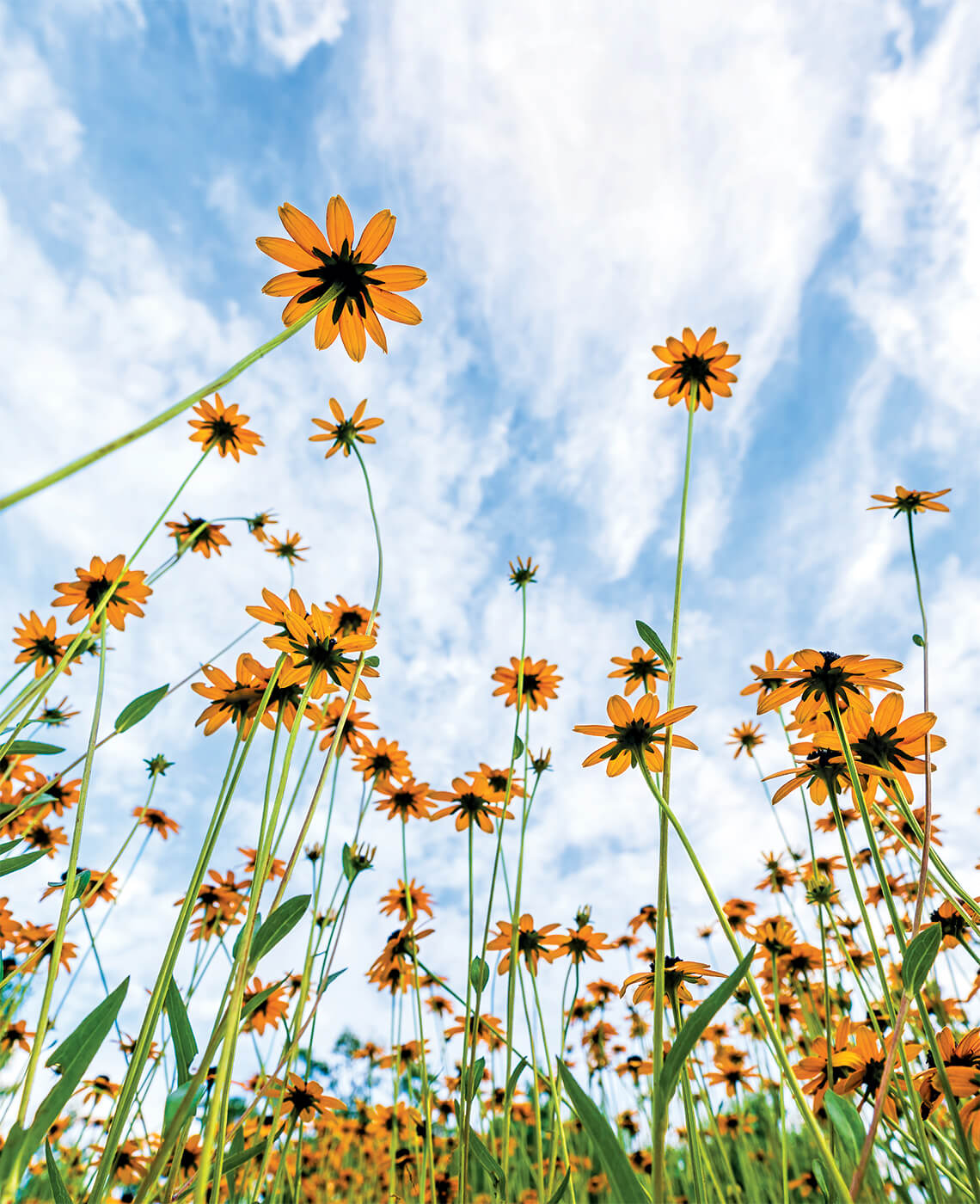 Surrounded by smooth rocks and soft beds of moss, Vaseyi Pond is both serene and vibrant, a magnet for all living things: Tree frogs, salamanders, turtles, dragonflies, and, of course, humans are drawn to its cool waters. The pond is named for Rhododendron vaseyi, or pinkshell azalea — one of the species delivered by glacier during the last ice age. Southern Highlands Reserve is known for its large collection of pinkshell azaleas, and when they bloom — often the first sign of spring in the winter-bare woods — “it’s like you’re walking through a pink cloud,” Holdbrooks says. “It’s magical.” 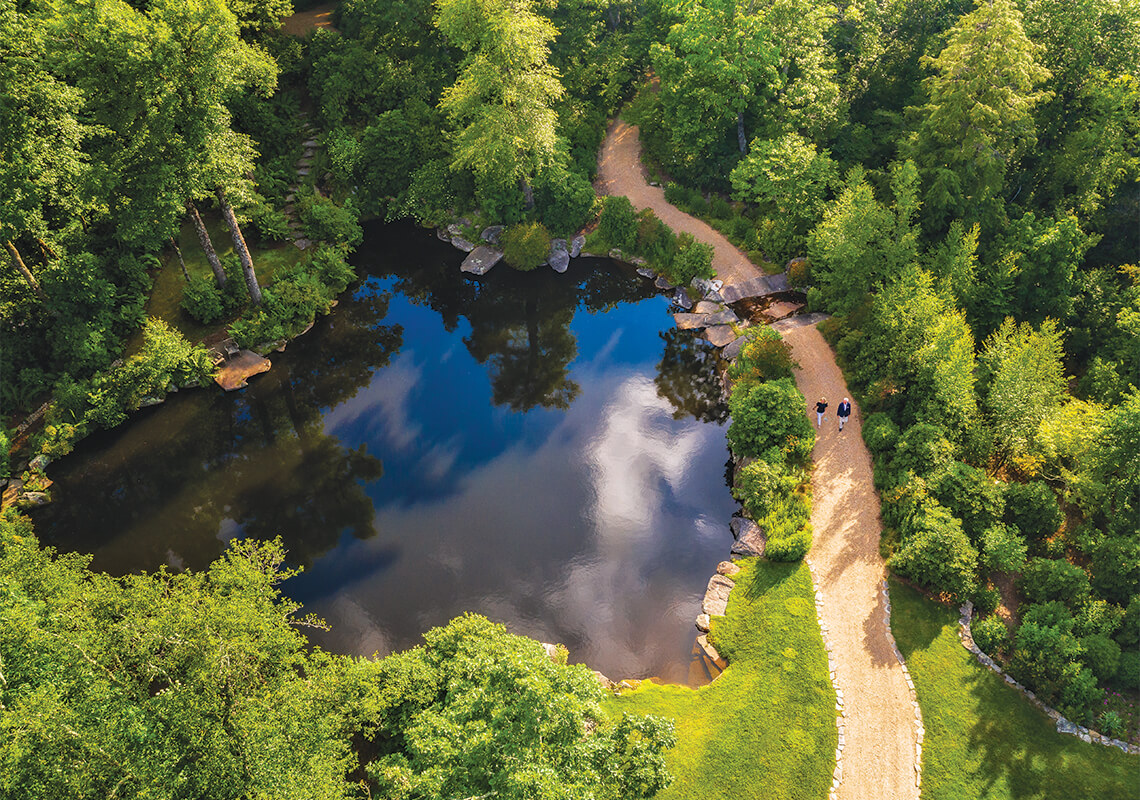 An aerial view of Vaseyi Pond. photograph by Thomas Moors

As a botanical garden, SHR keeps meticulous records of its plants: what species it has, where they came from, and where they’re planted. Staff members study growth cycles and long-term trends. In the fall, they collect the seeds of plants they want to grow, then store them safely over the winter. The Balentines hope that someday, every plant in the Great Smoky Mountains will be represented in a two-hour walk through Southern Highlands Reserve. One of the Smokies’ most famous flowers, the Gregory Bald azalea, grows in abundance in the reserve’s Azalea Walk. Thanks to centuries of natural cross-pollination, this “hybrid swarm” species has four sets of DNA, so its blooms burst forth each spring in an array of magnificent — and surprising — colors. 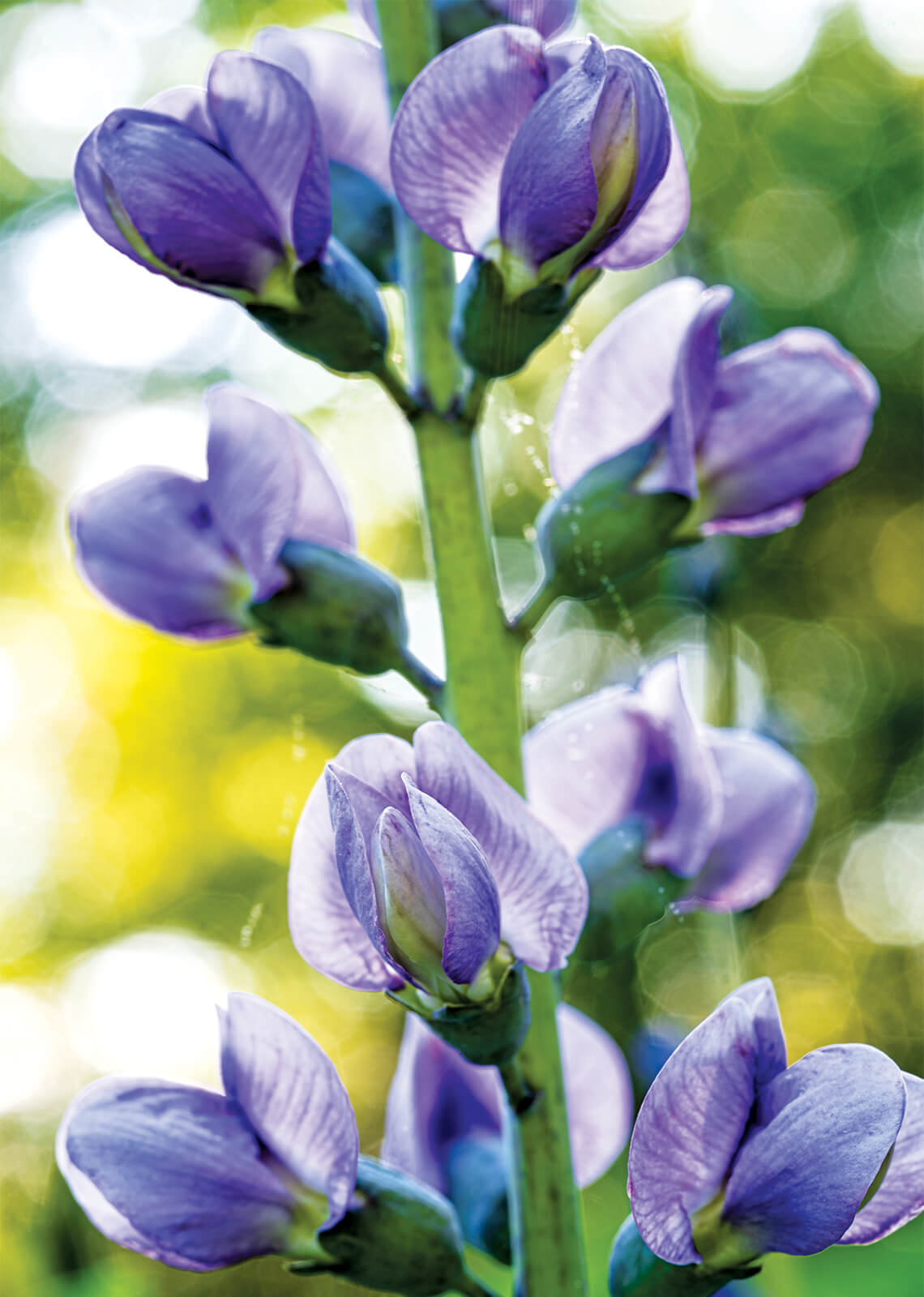 If Vaseyi Pond inspires tranquility, then the Viewsite nearby — looking out toward the mountains that unfurl in the distance — stirs a sense of wonder over our place in the natural world. On a clear day, you can see sunlight glinting off windshields on the Blue Ridge Parkway, and you can see dark green patches on faraway peaks, where the Southern Highlands Reserve staff has helped restore red spruce trees. Here at the water’s edge, we find the very best of what humans and nature can create together, honoring the legacy of the land and preserving its beauty forever. 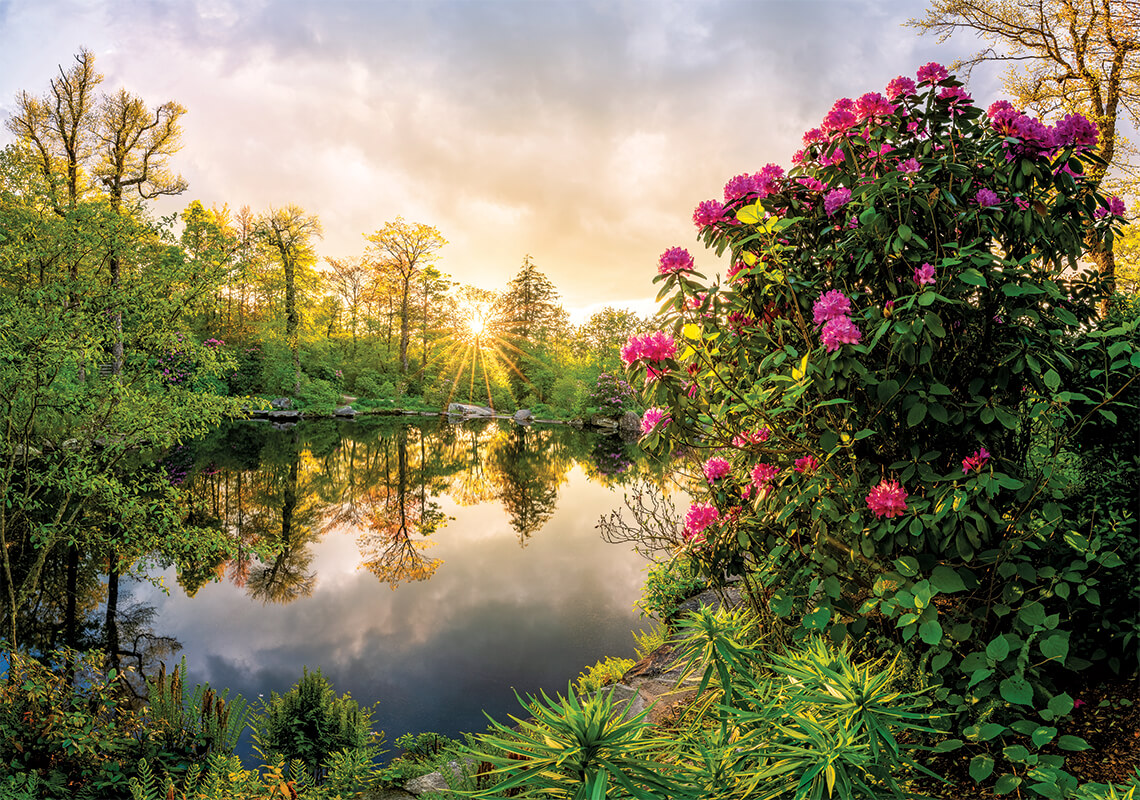 Plants thrive around Vaseyi Pond, located at the headwaters of the Tuckasegee River. Near a lush rhododendron, Turk’s-cap lilies grow along a rock wall, positioned so that people walking past can look up and into the flowers. photograph by Thomas Moors