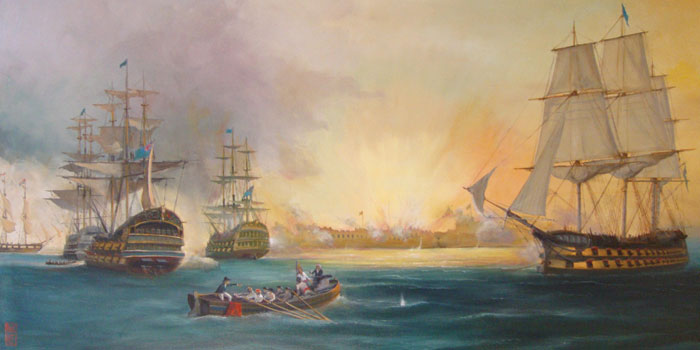 In the summer of 1899, the schooner George Taulane out of Beaufort battled strong winds and devastating waves as a hurricane swept the Carolina coast. The storm, named San Ciriaco, swallowed ships on its path to North Carolina.

The Taulane was heading to New Bern with a haul of fish scrap when its turn to tussle with San Ciriaco came, according to David Stick’s Graveyard of the Atlantic.

It was that moment of historic drama that inspired painter Paul Hee’s brush. Generations later, from his home and studio by Beaufort’s waterfront, Hee painted the Taulane rolling in the waves under angry black clouds, a snapshot in oil of the tumultuous storm.

Although he began painting late in life, Hee’s works drew a following in coastal North Carolina as well as in galleries in Rhode Island, especially among fans of maritime history.

Hee died last year at age 84. This fall, the Swansboro gallery where Hee housed most of his paintings, will hold a retrospective exhibit of his work.

“My interest really is having a memorial to him, a tribute to what he accomplished,” says Raymond Voelpel, owner of Tidewater Gallery. “He was kind of a local treasure, and not many people knew about him.”

Hee, a jack-of-all trades, took up painting after a varied career mix that included finance as well as selling and racing sports cars.

After retiring, Hee moved to Beaufort in the mid-1990s. It was a practical start into painting. Looking to decorate his new coastal home, he wanted ships to hang on the walls that would remind him of his love of the water. He had already taken some art courses, so he decided to paint them himself, studying and learning the medium.

Turns out he was pretty good at it.

Voelpel befriended Hee after Hee started stopping by the gallery. It didn’t take long for Voelpel to become a fan of Hee’s work.

“I liked the fact that they were finely painted,” Voelpel says. “There’s a degree of accuracy and beauty that’s real. They depicted the maritime history of the sea, ships famous for one reason or another. His use of color, light — he captured the mood of the sea.”

Vicky Eckenrode writes for the StarNews in Wilmington. Her most recent story for Our State was “A Gardener’s Best Guess” (October 2011).