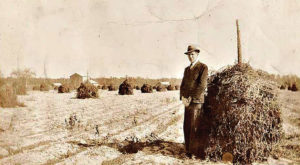 In the old days, growers like Harry Roberson, farming in the Martin County community of Gold Point around 1940, dug up their peanuts and stacked them around poles to dry. Photography courtesy of HANK ROBERSON

It’s hard to imagine a time when peanuts weren’t deeply entwined with our landscape and our lives. Native to South America, they likely arrived here with enslaved Africans in the 18th century. (The nickname “goober” may derive from the Bantu word nguba.) By the early 1800s, some North Carolinians were growing peanuts commercially, but the crop didn’t really catch on until the Civil War, when soldiers and civilians alike found relief from food shortages in “goober peas.” That appreciation carried on through the 20th century as North Carolina’s peanut industry grew. Today, local farmers produce more than 200,000 tons of the legumes each year. 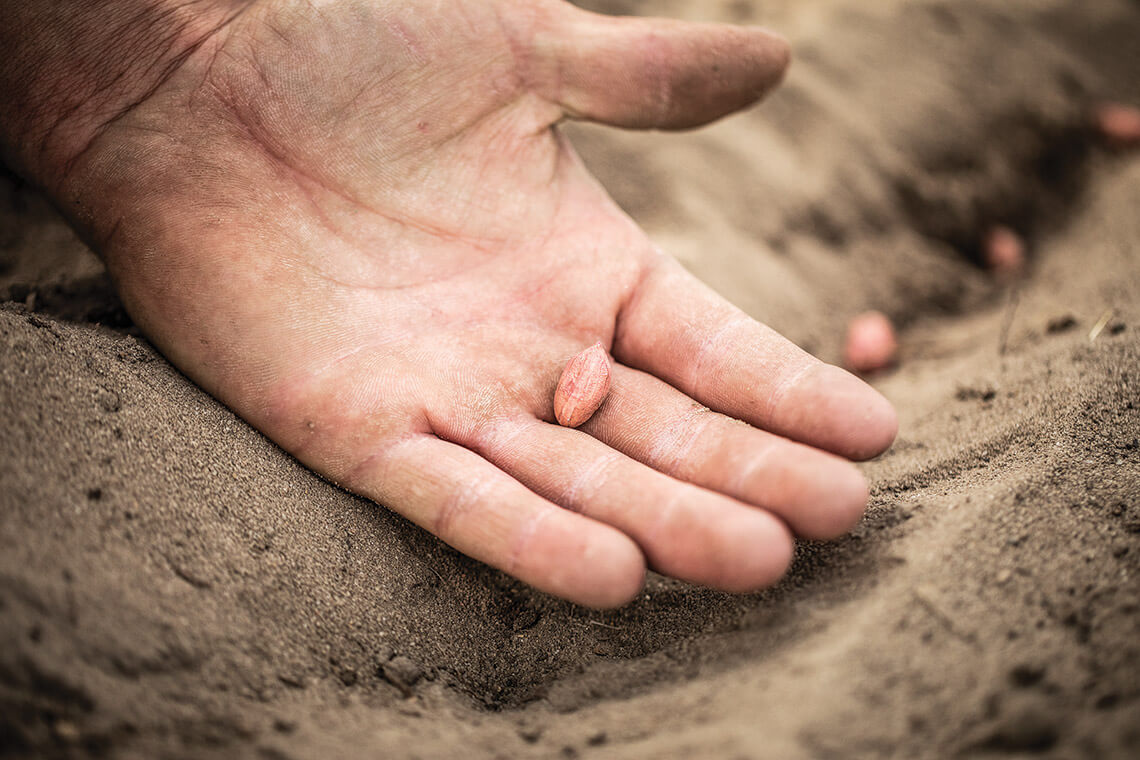 What looks like a snack is also the seed that will grow new legumes. photograph by Chris Hannant

Each May, farmers in eastern North Carolina carry on a deeply held tradition, planting more than 100,000 acres of sandy soil across our Coastal Plain with the seeds that will become the season’s peanut crop. The majority of that acreage is devoted to the Virginia variety — the large, flavorful “ballpark” peanuts that are sold with their shells intact. (Some goes toward runner peanuts, smaller and often used to make peanut butter.) Thirty to 40 days after planting, a butter-yellow flower blooms, then produces “pegs” that migrate back into the soil. There, in the ground, the tips of those pegs take on the familiar shape of the legumes we know and love. 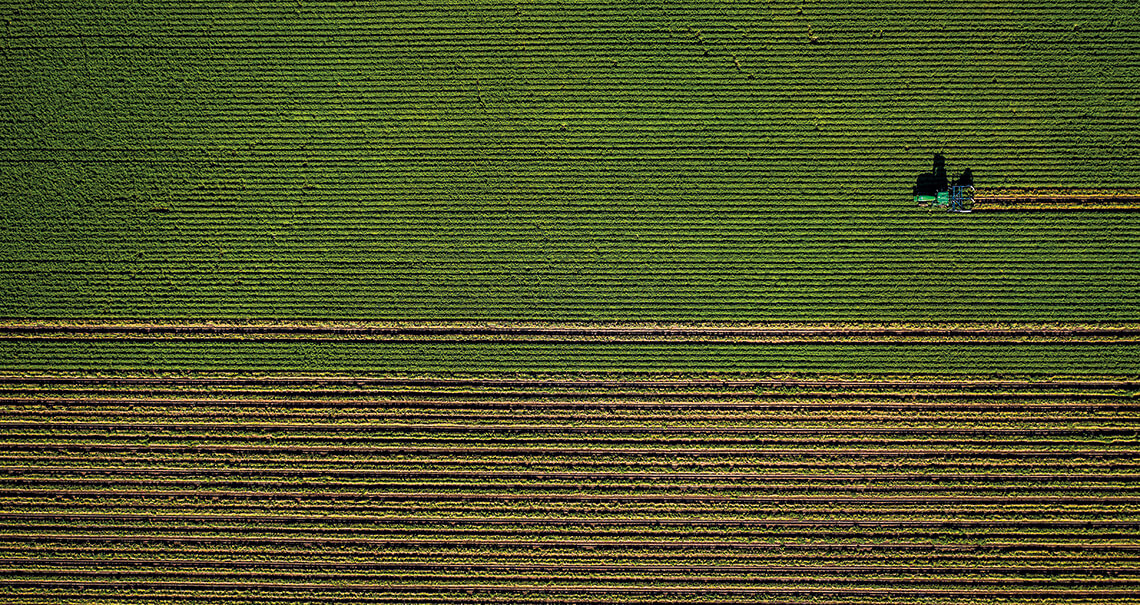 Fluffy windrows of peanuts are left to dry. photograph by Chris Hannant 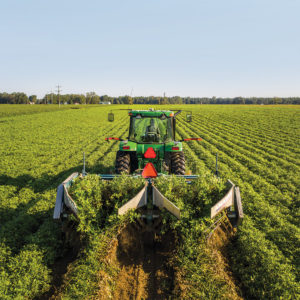 A digger pulled by a tractor plucks peanuts from the dirt, leaving them to dry. photograph by Chris Hannant

By mid-September, several months after the crop is planted, it’s time to begin the harvesting process. Farmers drive their tractors down leafy green rows, towing a machine called a digger, which pulls the peanuts out of the ground, shakes off the dirt, and inverts the plants. When they’re first removed from the soil, the pods are too moist to go straight into storage. So now, freed from the earth, they remain in the fields for a few days, lined up in windrows, curing in the sunshine and warm air of early fall. 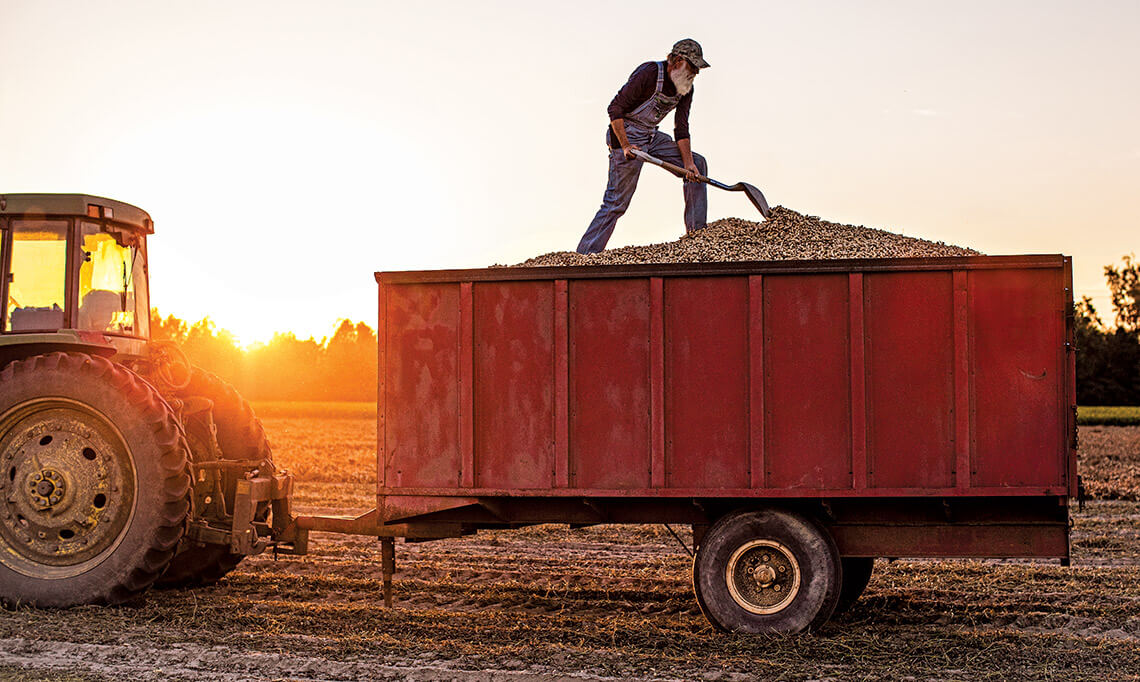 After the peanuts dry in the fields, they’re separated from the vines and stored in trailers to cure further. Farmer Patrick Hoggard levels out his harvest. photograph by Chris Hannant

After the peanuts have dried in their rows, a combine removes the pods from the vines, collecting the former in a hopper and returning the latter to the field. The peanuts are placed into drying wagons, where they continue to cure. When they’re dry enough to be safely stored, they’re sold to shellers and processors — well on their way to ballpark snacks, peanut brittle, and much more.

A Legacy of Legumes 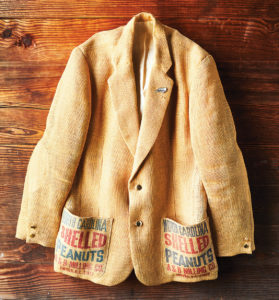 Bob Allsbrook says that the jacket hanging in the lobby of his company, Aunt Ruby’s Peanuts, was made from burlap sacks by a farmer friend about 30 years ago. “It was hot,” he says, “but you got a lot of attention when you wore it.” photograph by Alex Boerner

Bob Allsbrook’s roots run deep in Halifax County, where his family’s company, A&B Milling, opened as a feed-and-seed store in 1945. At the time, the town of Enfield was said to be the world’s largest producer of raw peanuts — its peanut festival began in 1937 — and although that’s no longer the case, the Allsbrooks uphold the tradition with Aunt Ruby’s Peanuts, named for Bob’s mother. The success of Aunt Ruby’s mail-order business means that the family sends North Carolina peanuts all over the country — and welcomes visitors who detour off I-95 to buy snacks straight from the source. 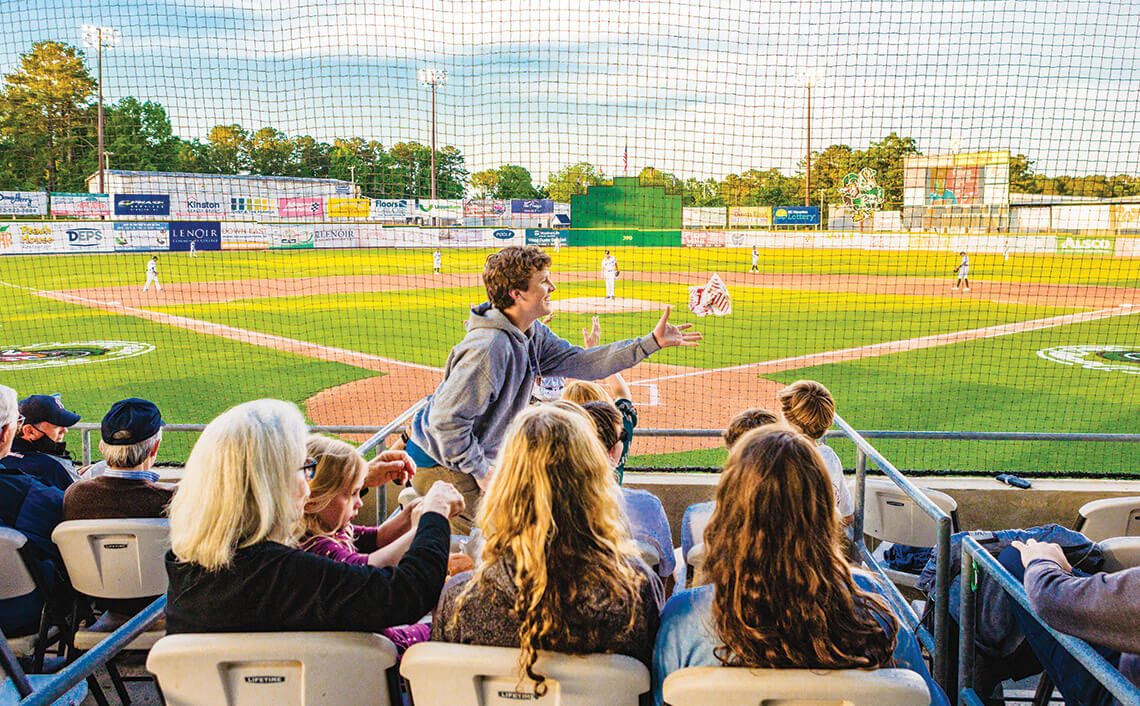 A fan of the Down East Wood Ducks catches a bag of Houston’s Peanuts at Grainger Stadium in Kinston. photograph by Baxter Miller

Across the state, pitchers wind up on the mound, and vendors lob bags of peanuts into the stands — like at Grainger Stadium in Kinston, where fans of the Down East Wood Ducks crack open Houston’s Peanuts from the Bladen County town of Dublin. We’re reminded of the partnership between peanuts and baseball — a tradition that dates to the 1890s — during every seventh-inning stretch, when we sing “Take Me Out to the Ball Game.” As if we could ever forget. As the game wears on, deep into a sultry afternoon or a dusky evening, those big, round peanuts are with us until they’re not, until all that’s left is a pile of shells crunching underfoot. 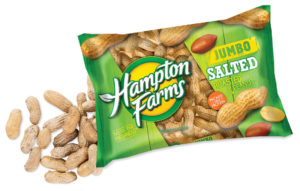 Cubs and Tigers, Cardinals and Orioles, Pirates and Padres, and plenty more major league teams boast specially branded bags of peanuts. The source of these snacks found ’round the country? Hampton Farms, headquartered in the Northampton County town of Severn. Since the Barnes family began farming peanuts in 1917, the company has grown into a leading roaster of in-shell peanuts, and the largest supplier to baseball stadiums. 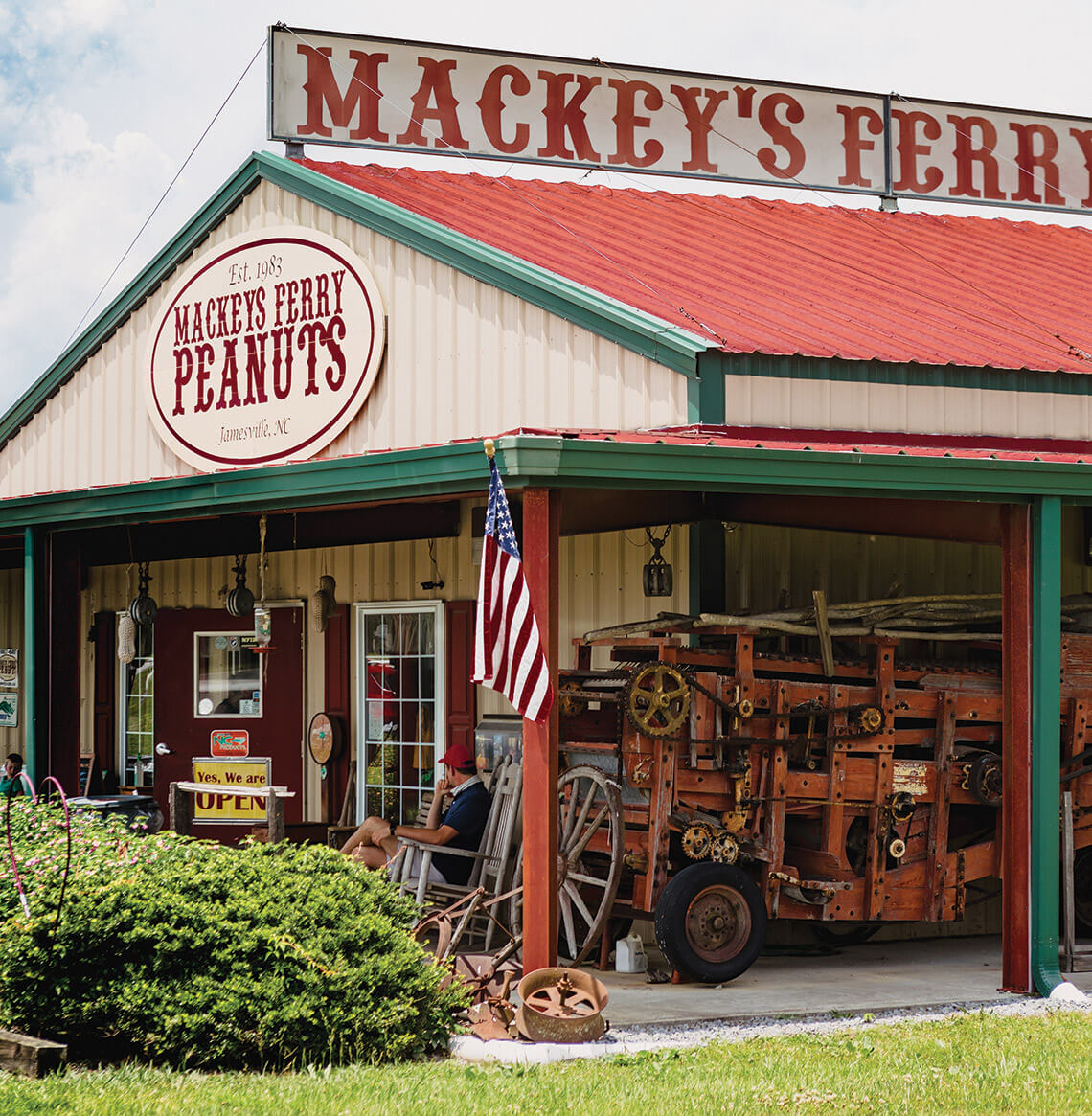 Mackeys Ferry Peanuts & Gifts in Jamesville remains a favorite stop for families headed to and from the beach. photograph by Baxter Miller

Distinctly Southern and a little bit elusive, boiled peanuts are a rare treat. A hand-painted sign on the side of the road might inspire a sudden detour — or you might already know exactly where to turn off of U.S. Highway 64 to find them, plain or Cajun-style, at Mackeys Ferry Peanuts & Gifts. The shop opened in 1983; now owned by Sharon and Chris Smith, it remains a favorite stop for families headed to and from the beach. Regulars know that when they peel away the shiny shells, they’ll find a different side of the familiar legume: soft, savory, just this side of beans. 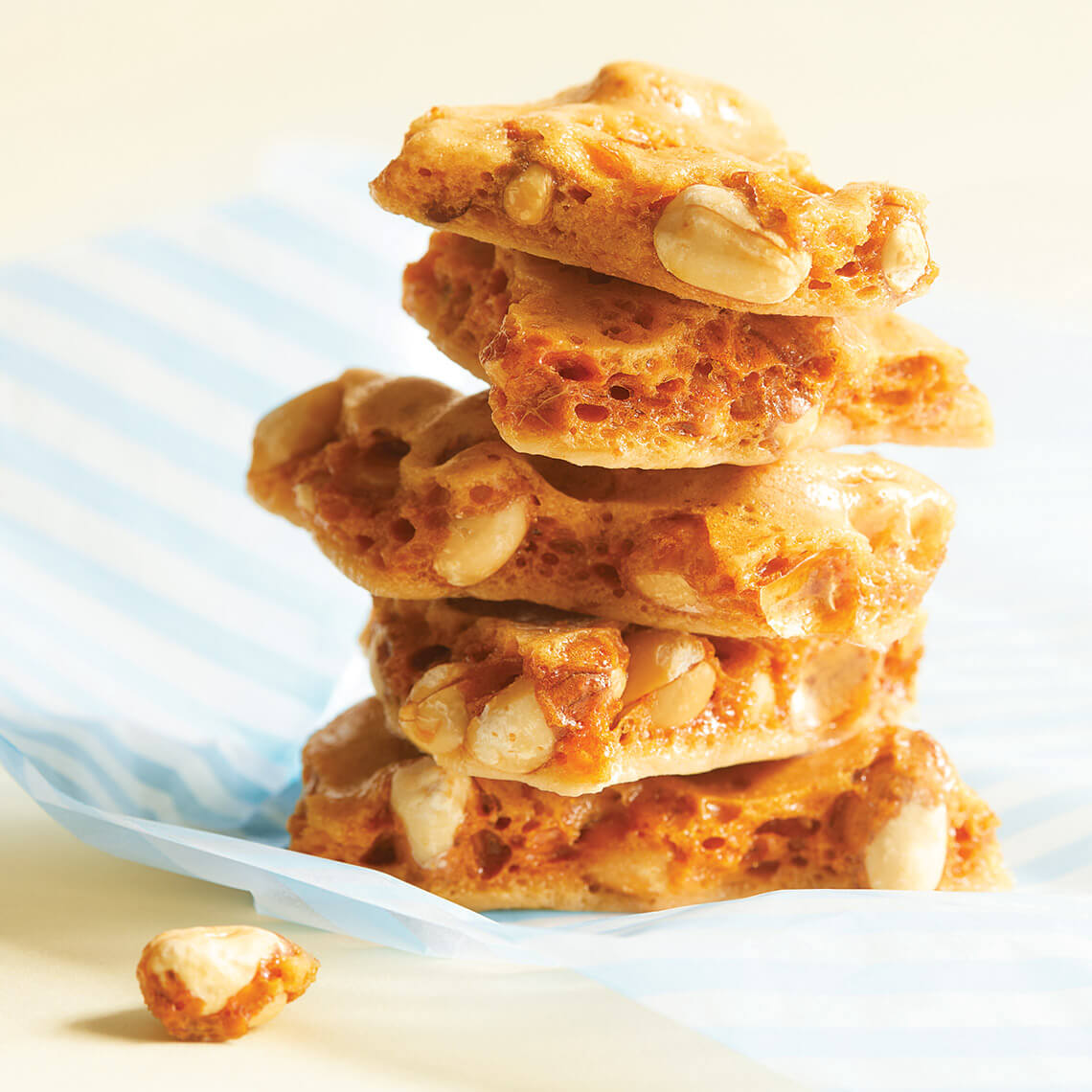 Over the years, Windsor-based Bertie County Peanuts has expanded its offerings to include sweet treats like peanut brittle. photograph by Alex Boerner

For most North Carolinians, “Bertie County” and “peanuts” are an immediate association, calling to mind big, clear jars that show off the spicy wasabi-and-soy or sweet honey-roasted peanuts inside. Yet for the company that put Bertie on the map, snacks were a happy accident: For years, Jack Powell Sr. “blister-fried” peanuts in his popcorn popper for clients of Powell & Stokes, the farm supply business his family started in 1915. Powell’s peanuts were so popular that, in 1992, he decided to sell them. And to give his corner of northeastern North Carolina a boost, he put it right on the label: Bertie County Peanuts. 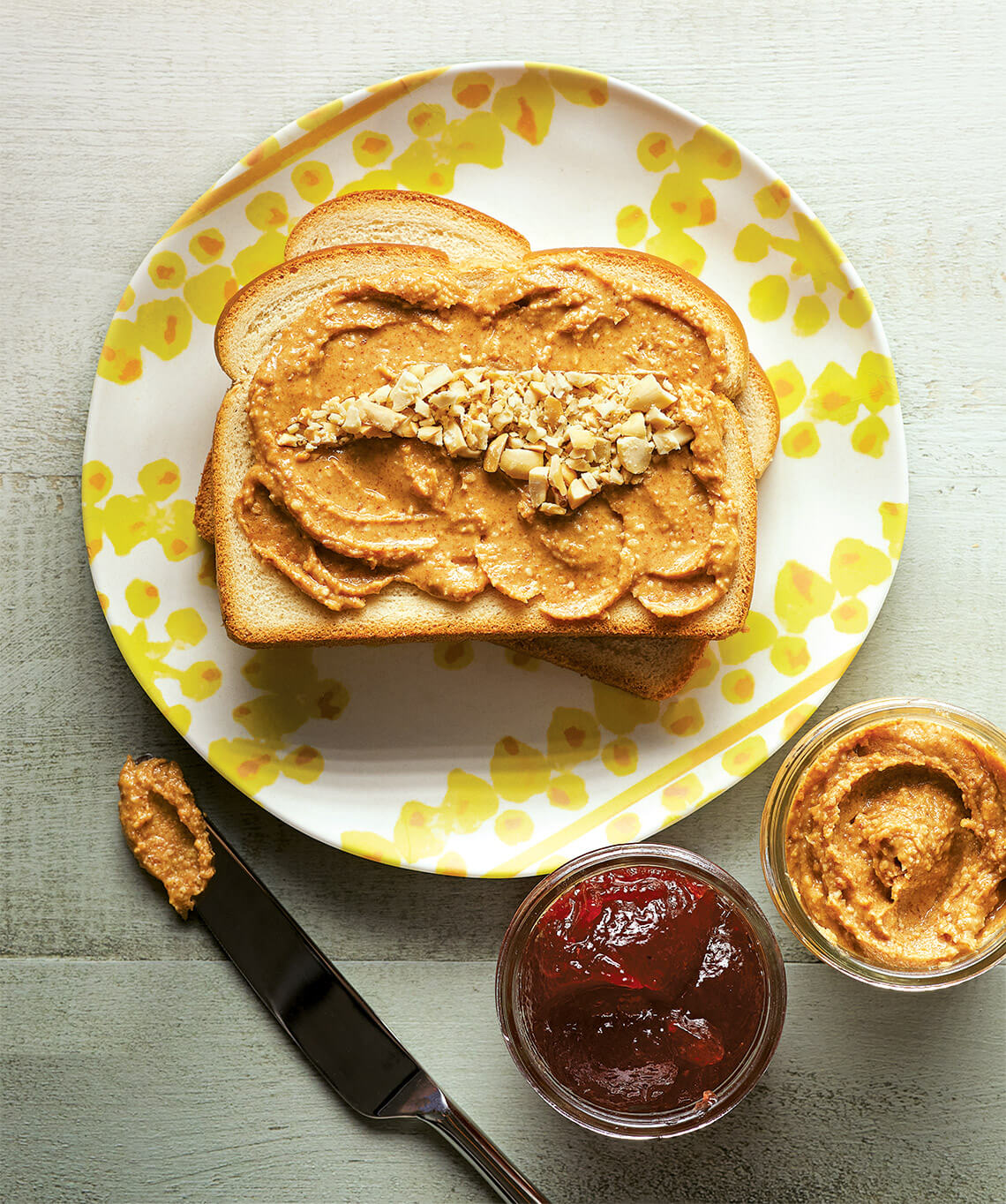 A peanut butter sandwich is also timeless, a simple pleasure at any age. photograph by Alex Boerner

Spread it on Thick

A peanut butter sandwich takes you back, doesn’t it? Close your eyes, and you’re in the cafeteria, opening your lunch box or brown bag with anticipation. But a peanut butter sandwich is also timeless, a simple pleasure at any age. (Southerners may be less inclined to agree on the perfect pairing — classic PB&J or an old-school slather of Duke’s mayo.) To satisfy North Carolinians’ demand, Winston-Salem-based Lowes Foods annually grinds 11,000 pounds — that’s five and a half tons! — of peanuts to make their peanut butter. And some stores let you make your own: At 16 Lowes Foods locations across the state, a row of red grinders turns Hampton Farms peanuts into bread’s favorite spread.