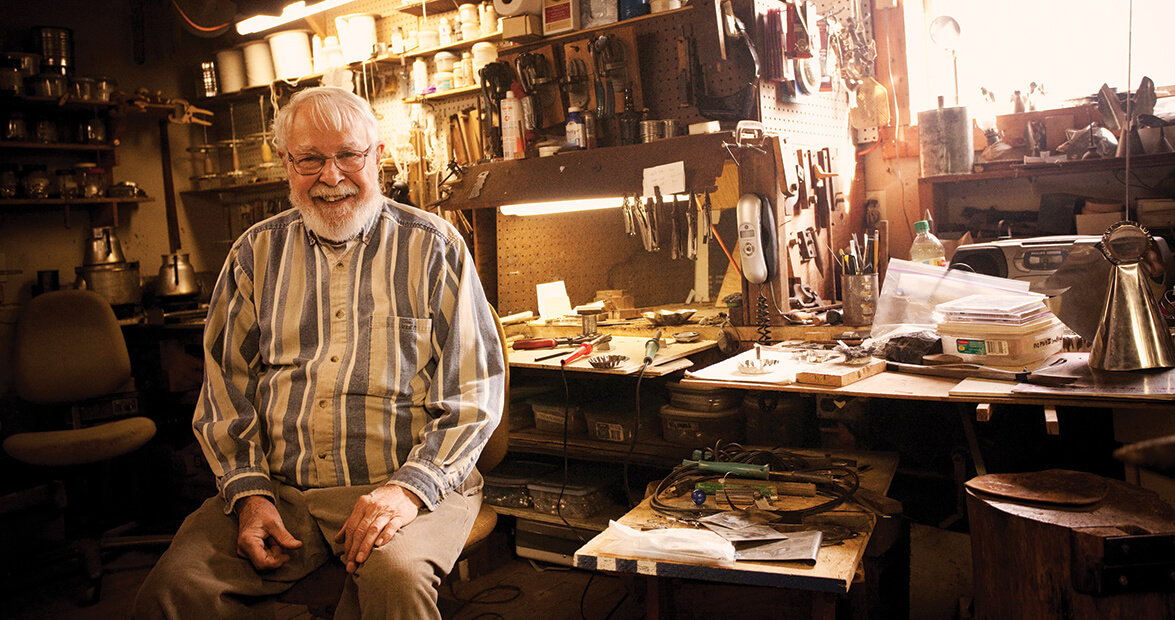 For Peter Blum, it’s all in the hands.

He can sit along a creek bank or even in a big round building at the North Carolina State Fair and turn a piece of tin into just about anything except an aardvark. He’ll tell you he doesn’t do aardvarks. He really has no idea what they look like.

Or he can sit in his workshop, beside his dad’s old potbellied stove, and turn a piece of tin into a lantern, a wall sconce, a chandelier, and cookie cutters that look like everything from a puffin to the upper half of the Statue of Liberty.

Tin is not very forgiving. It can cut you like a knife and leave your fingers nicked and bloodied. But not for Blum. He started using a pair of tin snips as his paintbrushes when he was 15, working for his granddad, Peter Sr.

He’s now 76, and he’s believed to be North Carolina’s only full-time tinsmith. He has made items for filmmakers, history buffs, families, Boy Scouts, and North Carolina’s own Colonial America time capsule: Old Salem.

More than two decades ago, his talent helped him earn the Order of the Long Leaf Pine, the highest honor the governor can bestow upon a North Carolina citizen.

Ask him about the philosophy behind his work, and he’ll tell you he’s a frustrated teacher. Or maybe just an “old N.C. State engineer.”

But sit with him in his workshop or his pickup or his 19th-century farmhouse eight miles northeast of Elkin. You’ll find a father, a historian, a Scot, a storyteller, and a proud Southerner whose Moravian ancestors walked from Pennsylvania to central North Carolina and created what is known today as Winston-Salem.

But mostly, you’ll find North Carolina’s Tin Man. And this one has a heart.

In the corner of Blum’s workshop, near the stove, is a broom, and Blum picks it up before heading up to his house.

“When you’re the young monkey on the farm,” he says, “they’ll always try to pick on you. And they did this to see if you had any grip. Let’s see if you have any grip.”

He holds the broom handle out at arm’s length and lowers it. His wrists don’t bend; his grip doesn’t break. Four years shy of his ninth decade, after sculpting and molding tin since he was a teenager, Blum’s hands are like a vise.

He’s a master craftsman, a third-generation tinsmith. In his workshop, he has at least 22 different kinds of hammers and machines more than a century old. Yet, when he first started out, he had much to learn.

All he has to do is look at his own hands and remember.

“That first summer, I was one large Band-Aid,’’ he says. “I kept Johnson & Johnson in business. Tin is sharp. See? They’re not bleeding anymore.”

He splays his fingers and shows his right pinky. He cut off the tip when he was feeding sheets of tin into a squaring shear.

“Good gosh, that was 20 years ago,” he says before pointing to his head. “You have to use that safety device between your ears so you don’t cut your fingers off.”

At age 15, when he walked into P.W. Blum and Sons on Trade Street in Winston-Salem, Blum saw crafting tin as more of a hobby. He earned 50 cents an hour, making everything from milk buckets to flue pipes for tobacco barns.

As he got older, he focused on another passion: being an engineer. In 1959, he graduated from North Carolina State University with a degree in mechanical engineering. He looked for work close to home.

It was because of his family. In 1757, his ancestor Jacob Blum walked from Pennsylvania to central North Carolina and ended up running the tavern in Old Salem when George Washington stopped by.

His family — both sides of his mother and his father — has been in North Carolina ever since. They fought for the Confederacy and worked tin for generations in Winston-Salem.

Walk the streets of Old Salem, and lamps that Blum’s granddad made will light your path; a few came from Blum’s own hands.

“I could’ve gone to work for the aircraft industry in California, but the history of my family — what they did and what they accomplished — kept me here,” he says. “This is a helluva heritage to live up to. Just look at what they did, and how they did it. No reason I couldn’t do the same.”

Blum’s last engineering job was as a material estimator for a roofing-supply company. He lived in Greensboro, and in 1987, when he heard his company wanted to move him to Charlotte, Blum didn’t want to go. He remembered his dad.

“Go back to my daddy, P.W. Blum Jr.,” he says. “He did a little bit of everything. His last job was as an Army ordnance inspector, and he got tired of that drive to Sanford, and he felt it was time for him to retire and do what he knew.”

So, he became the master tinsmith for Old Salem, a job he held for 22 years.

“And as a material estimator, you get to know that some of those roofer kids can get pretty pushy,” he says. “So, I said to myself, ‘Self, thou shalt go to tinsmithing.’ Just like my dad.”

He first started in his attic and then his garage in Greensboro’s Lindley Park neighborhood. Then, at 55, he became a father. He and his second wife, Annette, had a son: Peter IV.

Blum — or really Peter III — knew what to do. Move to the country.

He drew a circle 50 miles around Winston-Salem, and he found an old farmhouse built in the 1880s, situated on a triangle-shaped, 70-acre tract where he could turn a shed into a workshop, his house into a memory well, and his land into a classroom for him and his son.

“These woods teach you how to live,” he says from the front seat of his pickup as he drives through his property. “It teaches you to listen and observe. Now, a young kid will be throwing rocks and stomping, and you’re always trying to get them to shut up and get them semi-quiet.

“Now, you notice the qualifier ‘semi-quiet,’” he says, looking over his eyeglasses to make a point. “It makes sense. When Peter was 14, he told me, ‘Daddy, listen. You hear those birds? That’s the sound of a forest, and when I hear that, I know my forest is well.’”

Peter IV is now 22 and a biology major at Appalachian State University. He’s known by a few names: Little Peter to some and I.V. to his great-uncle Larry. Sometimes, his dad calls him Buck.

Together, they’ve caught hornyheads in their backyard creek, camped with Boy Scout Troop 529, played in the band at Winston-Salem’s Calvary Moravian Church, and gone to the Highland Games at Grandfather Mountain, wearing their kilts.

And as he grew, Peter IV went to craft shows with his dad. He saw up close the importance of patience and the need to persevere to reach a dream. He saw his dad do that through his work as a Colonial tinsmith.

“My dad loves creating, and he’s truly an artist at heart,” Peter says. “He enjoys it. I can see it in his face and his eyes and his smile. When he gets excited, he always smiles.”

And he loves to joke.

“You know what those are?” he whispers. “Porcupine eggs.”

And he likes nothing better than to set up at the Village of Yesteryear at the State Fair, attract a crowd of University of North Carolina fans, and tell them a thing or two about the cookie cutters and candle lanterns that he makes.

Then he tells them a thing or two about what they make.

“You know,” he tells them. “Most of the machinery you have to use is created by a State engineer.”

But get Blum in his house, near Little Princess, his Chihuahua, and he’ll point out the wall sconce he made for The Patriot, the map case he made for The Last of the Mohicans, and his cover shot from a Baltimore magazine — him in his muttonchops, wearing his Confederate artillery uniform, standing by a cannon. The date: October 1962.

Then he’ll pull his Scottish regalia from his closet. He’ll bring out his kilt, his sporran and his bright red jacket, and he’ll tell yet another story about a wedding 30 years ago and the whispers he heard from women.

“I told you you should have worn your formal military uniform,” they said to their husbands.

Blum smiles, looks over his eyeglasses, and ends his story with a thought spoken in a thick Scottish brogue: “Never does a man look so good than he does wearing his kilt.”

And he laughs. Again. Blum does that a lot, even though he hurts a little.

A car accident in 2003 broke his ribs, punctured a lung, and broke his neck. He now has three plates that surround his neck, and he walks with slumped shoulders and has to sit down a lot.

He can’t hike like he once did with his boy. But he can work a squaring shear, ride his pickup through his property, and point to a cross-stitched phrase in a frame, hanging above a second-floor door, and tell you what it means. Blum got it from a friend.

The phrase reads: “When We Remember To Live And To Give, We Become God’s Gift To Each Other.’’

“You ask, and I’ll tell you,” he says, pausing between each word. “But I may just lead you around for awhile.”