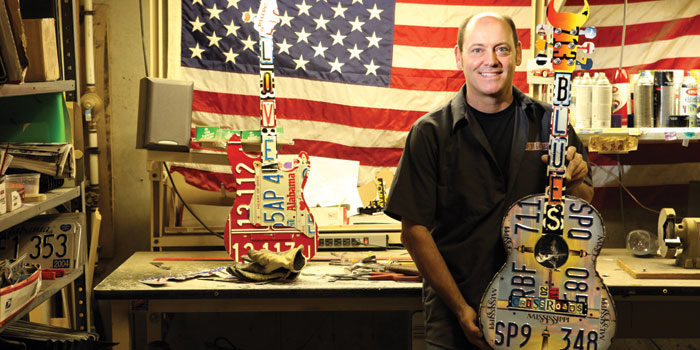 Moving with the practiced efficiency of someone who works with his hands for a living, Peter Geiger expertly cuts seven letters of varying sizes and colors and lays them out: Y-A-N-K-E-E-S. He smooths the edges and rounds the corners on a grinder, lines them up on the neck of the guitar he’s fashioning from license plates, and fastens them with stainless-steel screws and nails. Leaning the guitar against a shelf, he walks to the other end of his basement in his Cary home and looks to see if he got it right.

“If it’s not perfectly balanced, it won’t sell,” he says. “It’s got to look straight by eye. I can’t use a leveler because each piece is cut separately. So it’s all done by eye, and it makes a difference.”

It takes some tweaking, but eventually Geiger is satisfied enough to move on. It’s a precise business, even without any measuring devices. Geiger turns out about two pieces a week from his basement workshop, most of them special-order commissions like this one with a New York Yankees theme for a gallery in the Hamptons. Geiger’s design also includes the word “CHAMPS” and the number “27,” symbolizing how many World Series titles the Yankees have won.

Web Exclusive: Click here to see an exclusive interview with Peter Geiger in his workshop.

A hobby, then a career

Geiger made his first piece in 2005 on a whim, cutting old license plates into the shape of a guitar and hanging it on a wall. At the time, he was selling cars in Long Island, New York. People asked about buying that first one, so he started selling the guitars, which are decorative only. Sculpture was still a hobby when Geiger moved his family to North Carolina in 2007, but it became a full-time occupation this past summer.

Business really picked up when Geiger won the Design Rascal Flatts’ Tour Guitar contest in 2012. He crafted a design using plates from the group members’ native states (Ohio, Oklahoma, and Tennessee). During every summer concert, Rascal Flatts played a guitar onstage with a laminated photo of Geiger’s design. Country star Brad Paisley is another celebrity client (Geiger’s favorite guitar of the 400 or so he’s made is Paisley’s), and the mother of the University of North Carolina at Chapel Hill’s chancellor, Holden Thorp, ordered her son a baby blue Fender Stratocaster for Christmas one year.

Geiger’s house is easy to identify by the birdhouse made of license plates on the front porch. Inside by his basement workbench are tidy rows of plates on shelves. The Eric Clapton Pandora channel is usually playing while Geiger painstakingly cuts and bends the pieces by hand. He mounts the pieces on particleboard patterns, fastening everything into place with screws, nails, and rivets.

Custom jobs start at a little more than $600, the cost varying based on the amount of labor, detail, and license plates needed. Geiger’s most expensive guitar cost $1,400. But the occasional celebrity client aside, most of Geiger’s customers are regular folks who want a token of their favorite sports team or rock band; he made one with horns for an AC/DC fan. Others are looking to commemorate a piece of family history.

“I’ve done pretty much every style,” Geiger says. “People want to recreate a certain guitar, so they send pictures and I make it to their specifications — usually certain states, a saying, nicknames, dates.”

Lellie Pittman Capwell, a North Carolina native who works as a music-industry publicist in Los Angeles, has a Geiger-crafted sculpture that pays tribute to her late father, a farmer from Leggett. Capwell commissioned Geiger to make a banjo — his first — out of old license plates from tractors and trucks in the farm’s barnyard, with the date of her father’s death (12/10/09) on the tuning pegs.

“When my mom brought it out at Christmas, the entire room was filled with tears,” Capwell says. “It’s one of the greatest gifts ever. Every part of it means so much to me. I could not be happier with it. It’s something cool that I’ll cherish forever.”

David Menconi is the music critic for The News & Observer in Raleigh. His most recent story for Our State was “Jars, irons, cigars, and churns?” (November 2012).