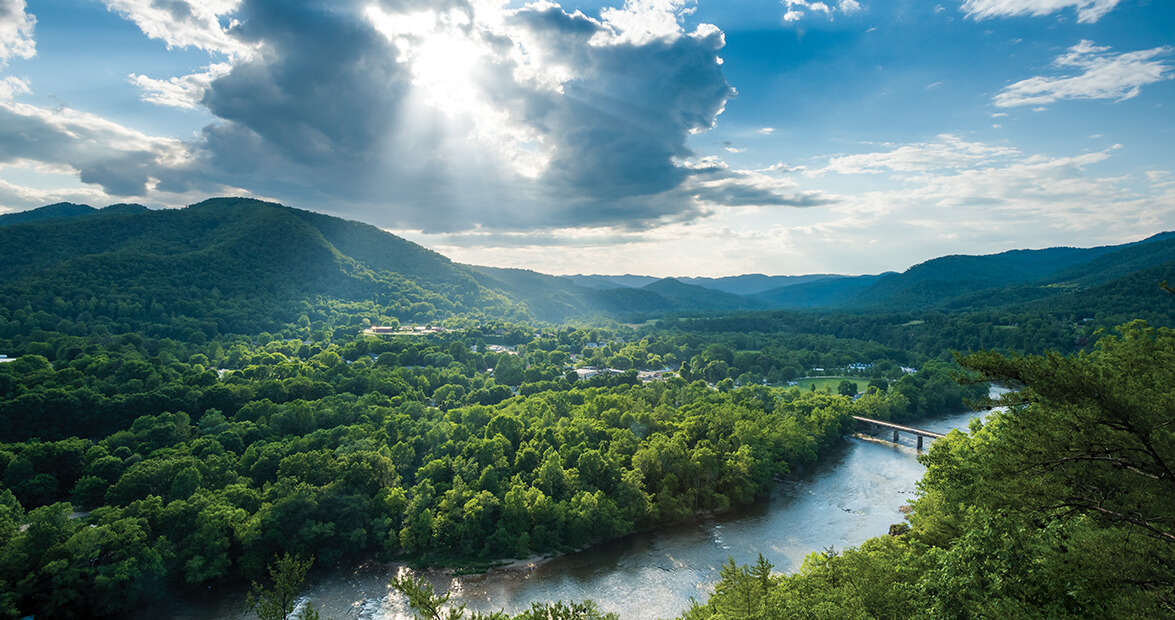 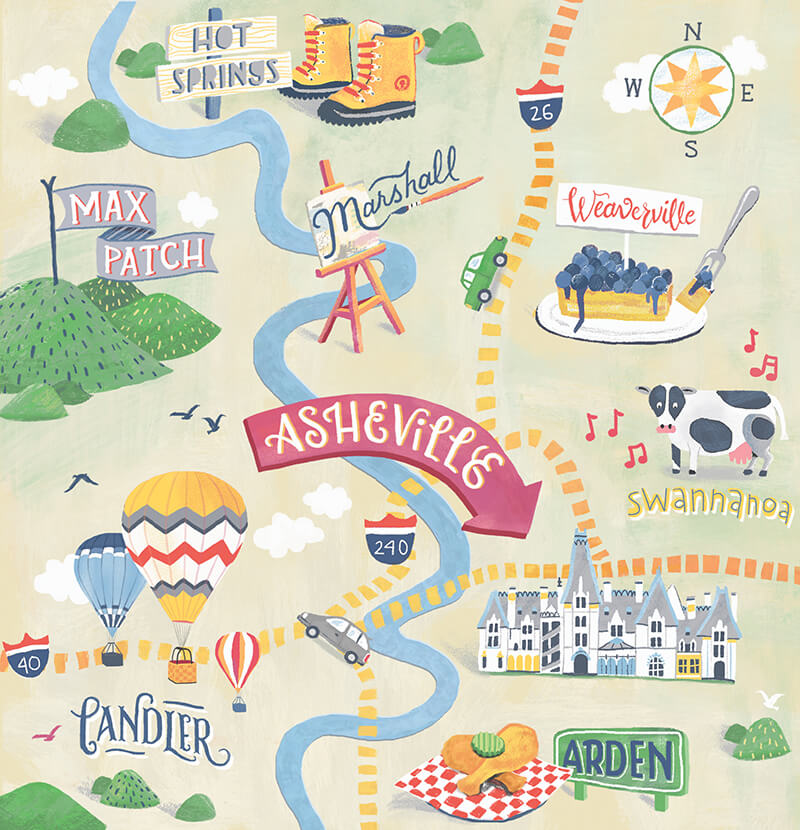 When in Asheville, explore what’s just beyond. photograph by Laura Weiszer

Get out your compass. Not the navigational one, but the metal-legged tool you remember from geometry class. Punch the point into Asheville — that’s our hub — and draw a circle all around, up to Hot Springs and down to Arden. Swing that arc around Candler, Swannanoa, and Marshall. And, for good measure, get Max Patch in that circle, too. What you end up with encompasses a half-dozen enchanting mountain towns where you’ll find the spiciest fried chicken, the most melodic music, and the sweetest treats. Just don’t forget a map — or that other kind of compass. 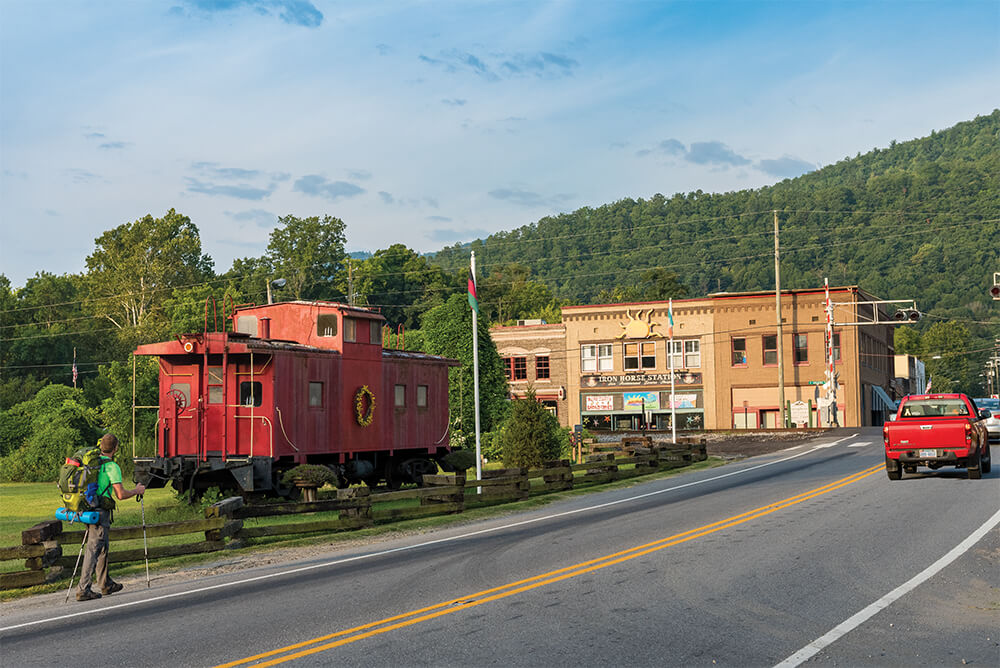 Look down. Even if you arrived by car, you can say you’ve been on (if not exactly hiked on) the Appalachian Trail. Stamped right into the sidewalk is the familiar AT logo — because the AT, as hikers and those in the know refer to the trail, runs, quite literally, down Hot Springs’ Main Street. In 1778, settlers came across the geothermally heated mineral springs that gave the town its name, and by 1882 patrons were arriving by train to soak in those waters. Because Zebulon Vance, the Civil War officer and former governor of North Carolina, worked as a hotel clerk here, Hot Springs is also on the Civil War Trail. Still, at 272 miles from the AT’s southern terminus in Georgia, hikers are just happy to find civilization and get their AT “passports” stamped. Only 1,900 more miles to Maine. 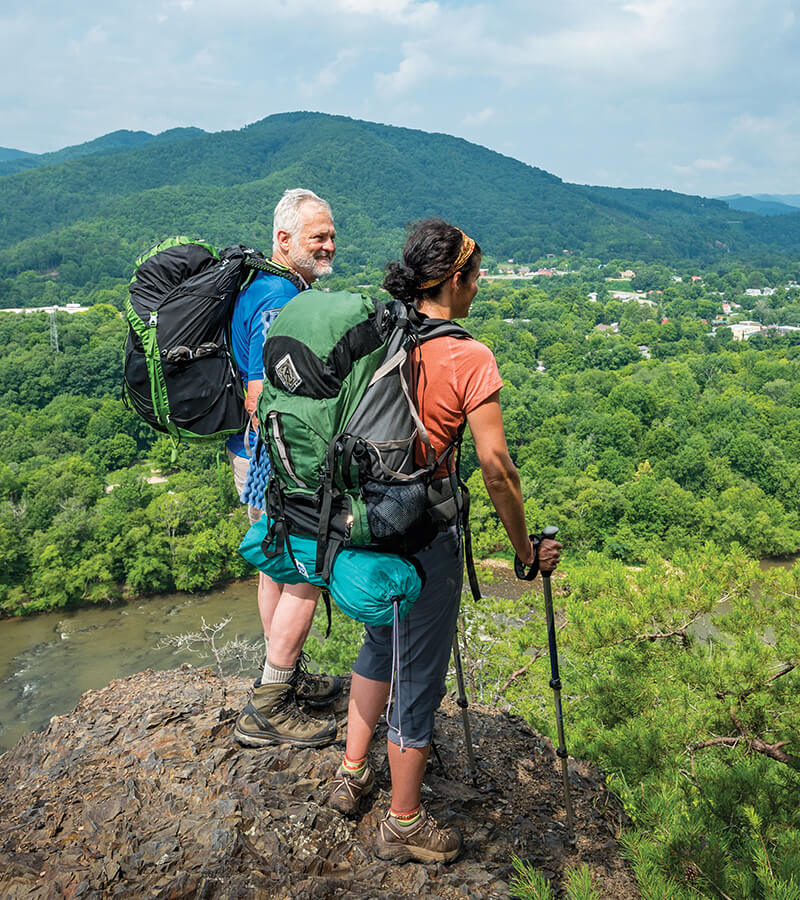 Woody Farmer and his daughter, Jennifer, have been section-hiking the Appalachian Trail since 1995. photograph by Emily Chaplin 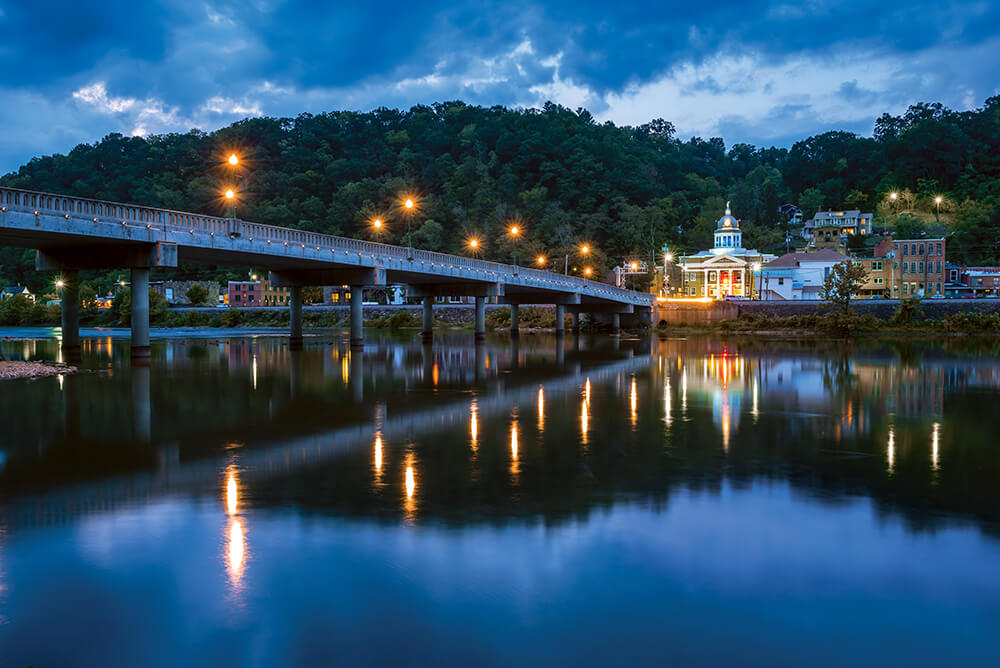 Squint a bit, and you’ll think you’re looking at a Disney version of a historic Southern river town. The Madison County courthouse with its beautiful cupola, built in 1906 for $30,000, stands at the center of town. A bridge leads over the French Broad River to Blannahassett Island. Once a busy stop on the old Drovers’ Road between markets in South Carolina and Tennessee, Marshall today offers a quieter pace for residents who appreciate the advantages of Asheville, but also the charms of a small community. 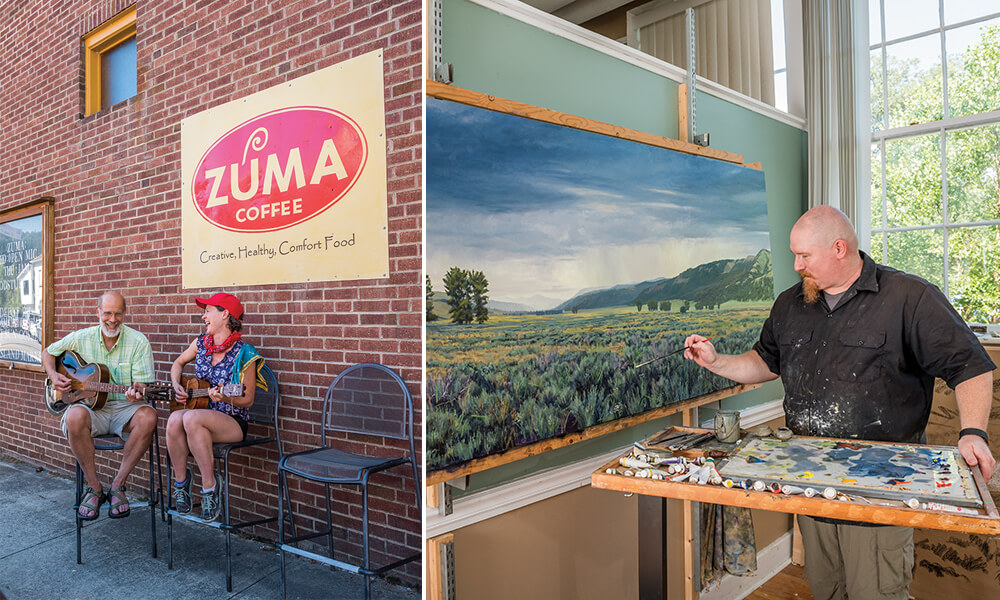 In a classroom, inside a building, on an island, in the middle of the French Broad River, Ken McLeskey works in the natural light afforded by multipaned windows. For students of a certain age, the setting is instantly familiar: high, high ceilings; long halls of narrow, glossed, hardwood boards; and transom windows over doors to classrooms, all housed within a handsome, chunky, two-story brick building. This is Marshall High Studios, once Marshall High School proper, a 1925 building on the National Register of Historic Places that was once dangerously close to demolition. Instead, three individuals who live “within spitting distance of Marshall” formed a corporation in 2006, days before the scheduled deconstruction, to convert the classrooms into art studios. 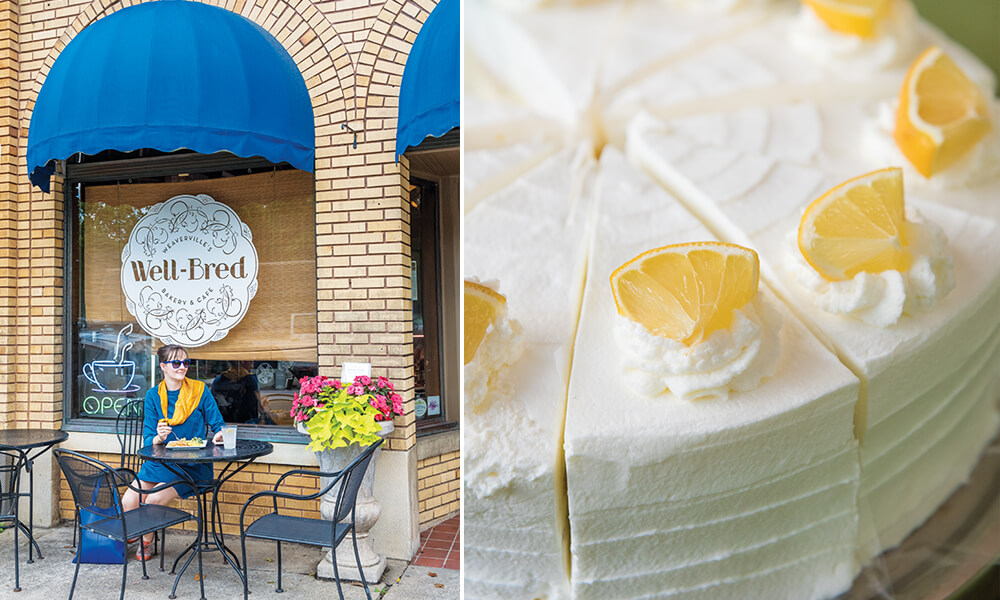 Well-Bred Bakery & Café is a point of pride in Weaverville. Desserts — like this Lemon Crème Cake — are works of art that have earned the downtown institution an area Best Bakery award. Its entrées deserve praise, too — just ask Summer Cooley on her alfresco lunch break. Residents are equally proud of their hometown, where artists and tech-industry employees ply their either-end-of-the-spectrum trades. 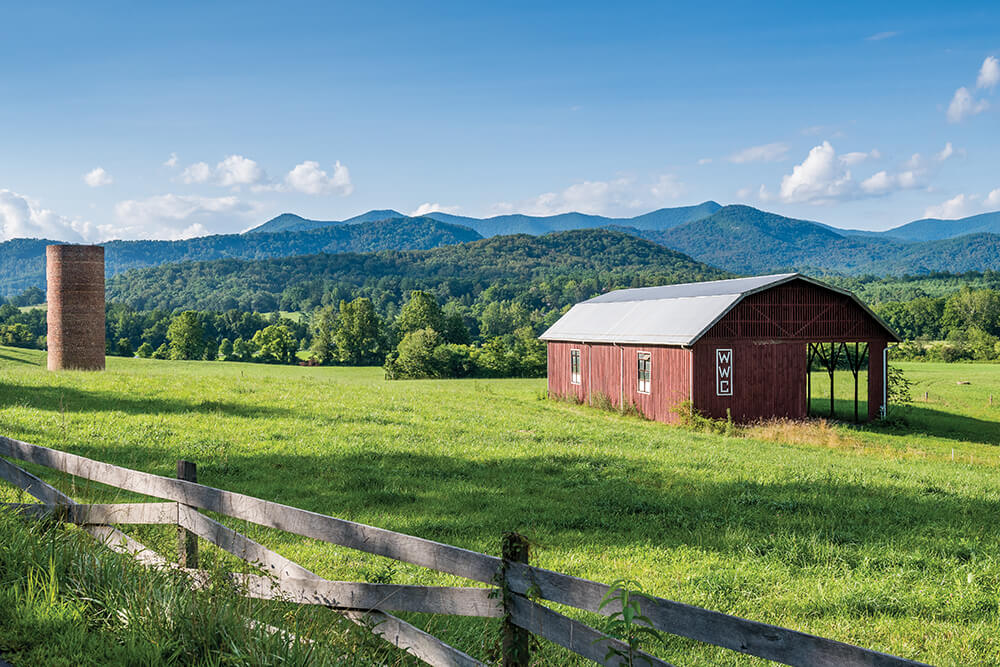 Picturesquely situated by the Swannanoa River, Warren Wilson College began as a mission of the Presbyterian Church in 1893. After various iterations, including a high school and junior college, Warren Wilson became a four-year institution in 1967. It was one of the first schools in the South to desegregate, inviting Swannanoa resident Alma Shippy, who was black, to attend school in 1952. Today, Warren Wilson is a college and a working farm, and one of the seven colleges in the U.S. that belong to the Work Colleges Consortium. Every student commits to contributing 240 hours per semester on one of more than 100 work crews, from archaeology to blacksmithing. 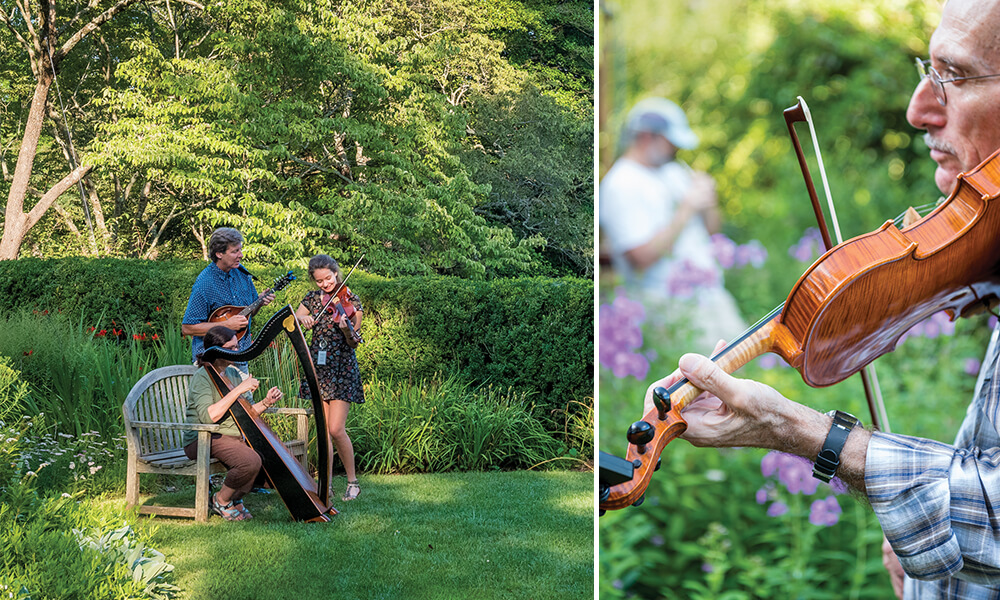 En plein air isn’t only for painters. An outdoor arena makes the chords more melodious for these musicians during Celtic Week at the Swannanoa Gathering. photograph by Emily Chaplin

Every July and August since 1991, students, performers, and music lovers from all over the world have gathered at Warren Wilson College for workshops and concerts in folk music. More than 600 of the world’s greatest folk artists have served as instructors at the Swannanoa Gathering. What could be finer than being ring-’rounded by the Blue Ridge, under a starry nighttime sky, with fiddle music softly, sweetly filling the evening air? 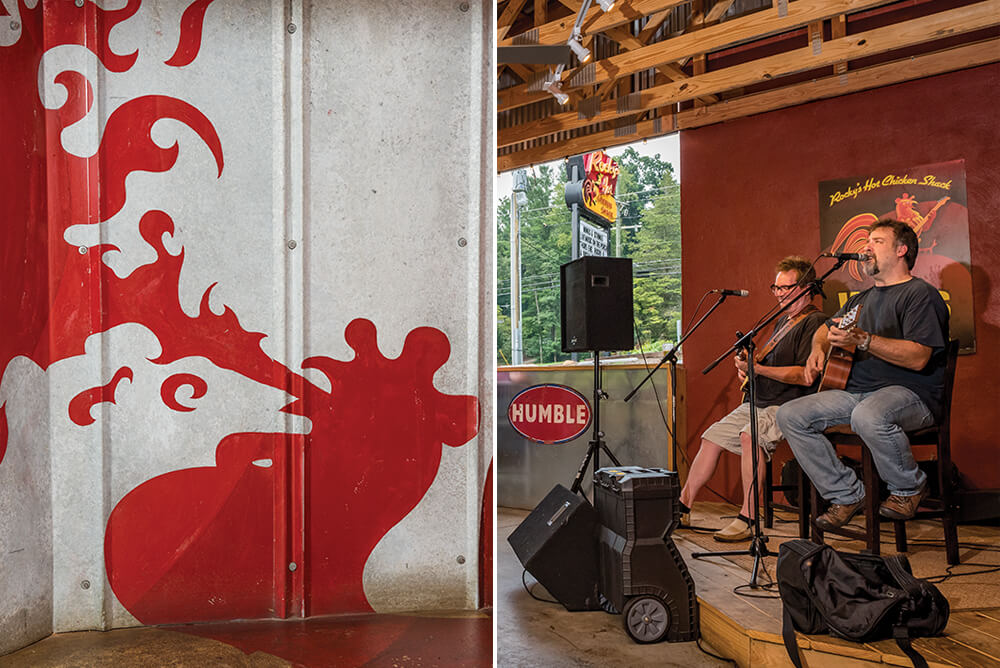 A waitress at Rocky’s Hot Chicken Shack explains the XX-hot portion of the “About Our Spices” sign, saying, “That’s basically a practical joke.” But a Wall of Flame features photographs of a few who went for the gold and lived to tell the tale. Rocky’s Tennessee-style fried chicken has a definite reddish hue that resembles paprika but is more likely cayenne. Don’t worry: The chicken comes on two slices of white bread to cool — or at least soak up — the heat, before you dig into puddings layered in Mason jars. Blackboards tout “ridiculously good fried chicken and soul food” and lists of local farmers. Sit inside or out; live music cranks up on Thursdays. Chapped lips should be a goal. 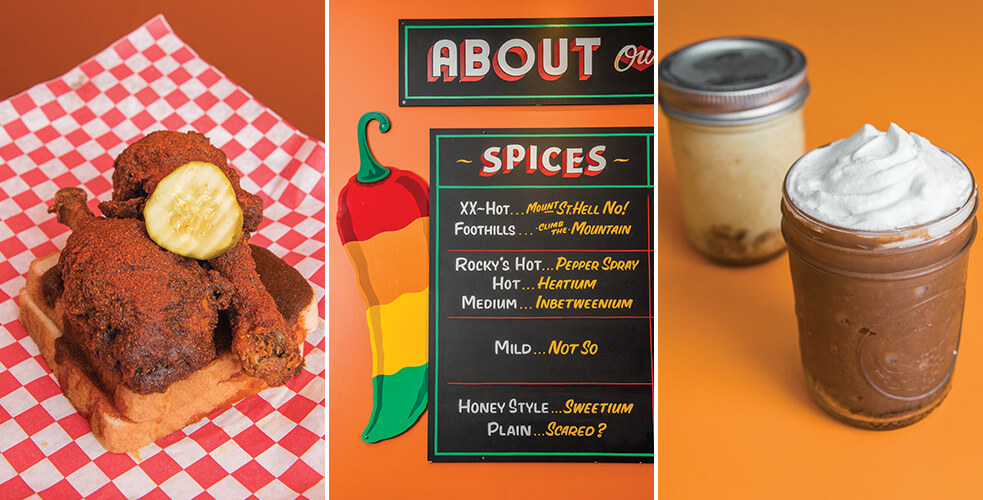 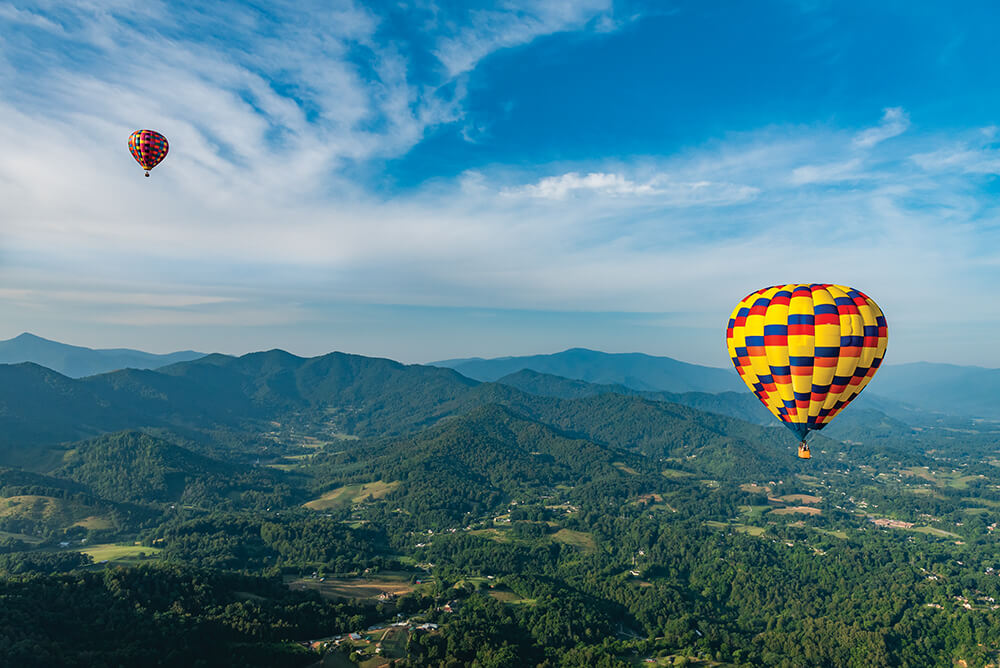 Twenty minutes from downtown Asheville, in Hominy Valley, lies Candler, where gaily colored hot air balloons get you up, and out, and, most important, over whatever responsibilities wait below. The balloons take flight at dawn, when wind currents are least likely to interfere. Lucky passengers are rewarded with a nearly noiseless flight over ridges, valleys, mountains, and a certain castle called Biltmore — from a perspective normally available only to birds. Birds, however, aren’t invited to the traditional post-flight champagne breakfast. 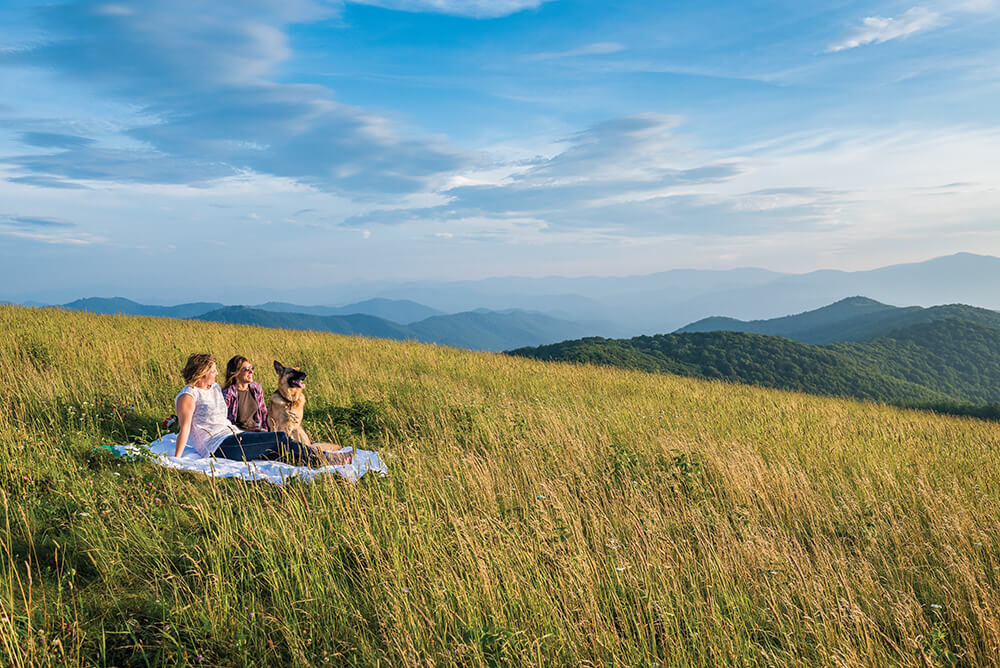 An evening picnic — or breakfast biscuit, or lunchtime sandwich, or afternoon snack — is made memorable and magical with the incredible views of the Blue Ridge from Max Patch Bald. The grassy, wildflower-covered mountain is located on a moderate, 1.4-mile loop outside Asheville, making the hike one of the most popular spots on North Carolina’s portion of the Appalachian Trail. Friends and Ashevillians Sara Kate Eubanks and Amanda Godino kick back and enjoy mile after mile of horizon. Oh, and so does Zeta the dog.