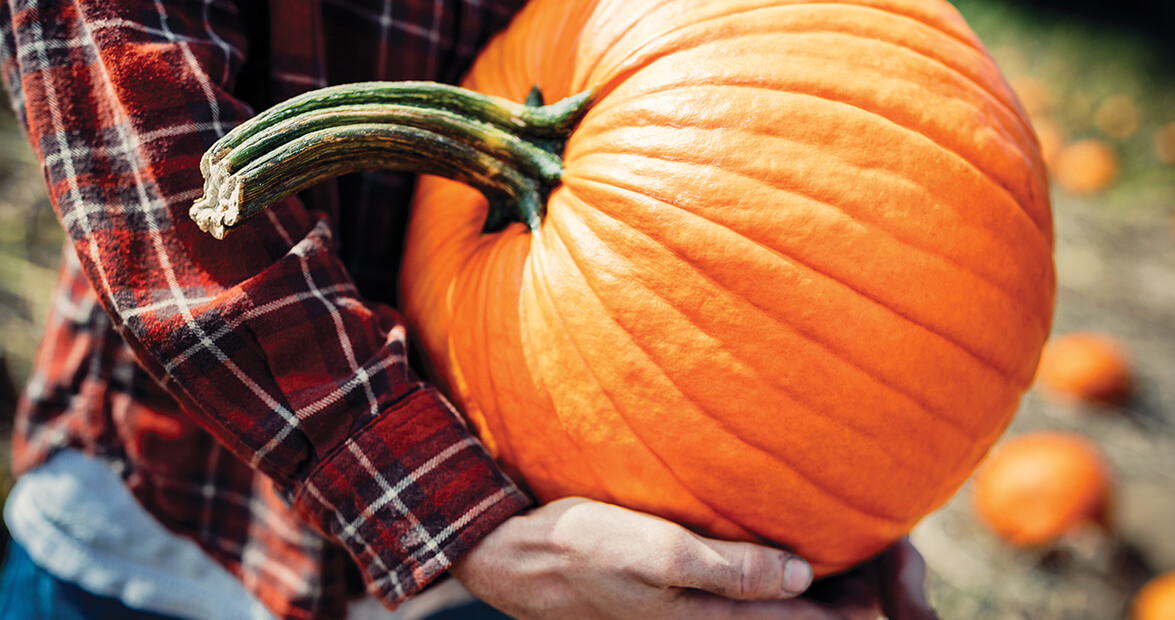 On the historic Brown family farm in Watauga County, fans of fall gather to celebrate the season with crisp air and crimson leaves, rounds of cornhole and picnics on the banks of the New River, two miles of twists and turns through a five-acre cornfield, and a passenger train for rides around the farm. Plus pumpkins — four acres of carving and eating varieties for the picking. One piece of advice: You may want to wait to choose your pumpkin until after you’ve wound your way through the corn maze. 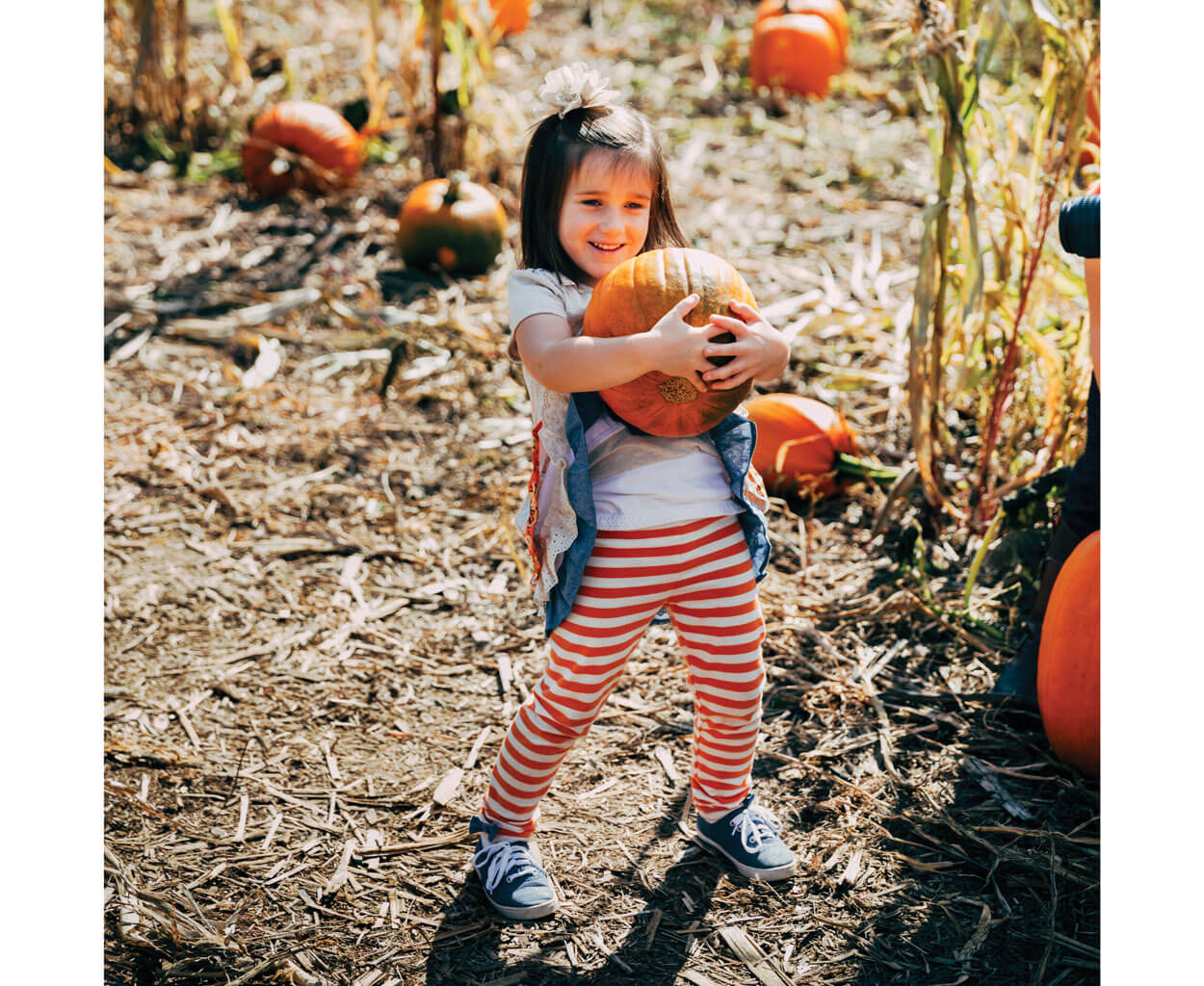 Picking out a pumpkin at New River Corn Maze in Boone is a classic western North Carolina day trip. photograph by Charles Harris

Related Video: A trip inside the world’s largest distributor of costumes, right here in North Carolina.

Just off the Blue Ridge Parkway in Alleghany County is North Carolina’s pumpkin paradise: 1,600 acres of gourds growing fat and happy in the cool mountain air. Now one of the largest producers of pumpkins on the East Coast, the farm began humbly, when the late Blan Bottomley planted a few acres of cabbage in the 1960s. In the ’90s, his sons Mitchell and Kelly convinced him to grow Christmas trees and pumpkins, respectively, and the farm, still family-owned, has been expanding ever since. Although the Bottomley fields aren’t open to the public, they provide pumpkins to big-name stores like Harris Teeter and Food Lion, meaning that this fall, many North Carolinians will proudly place a Bottomley pumpkin on their porch. 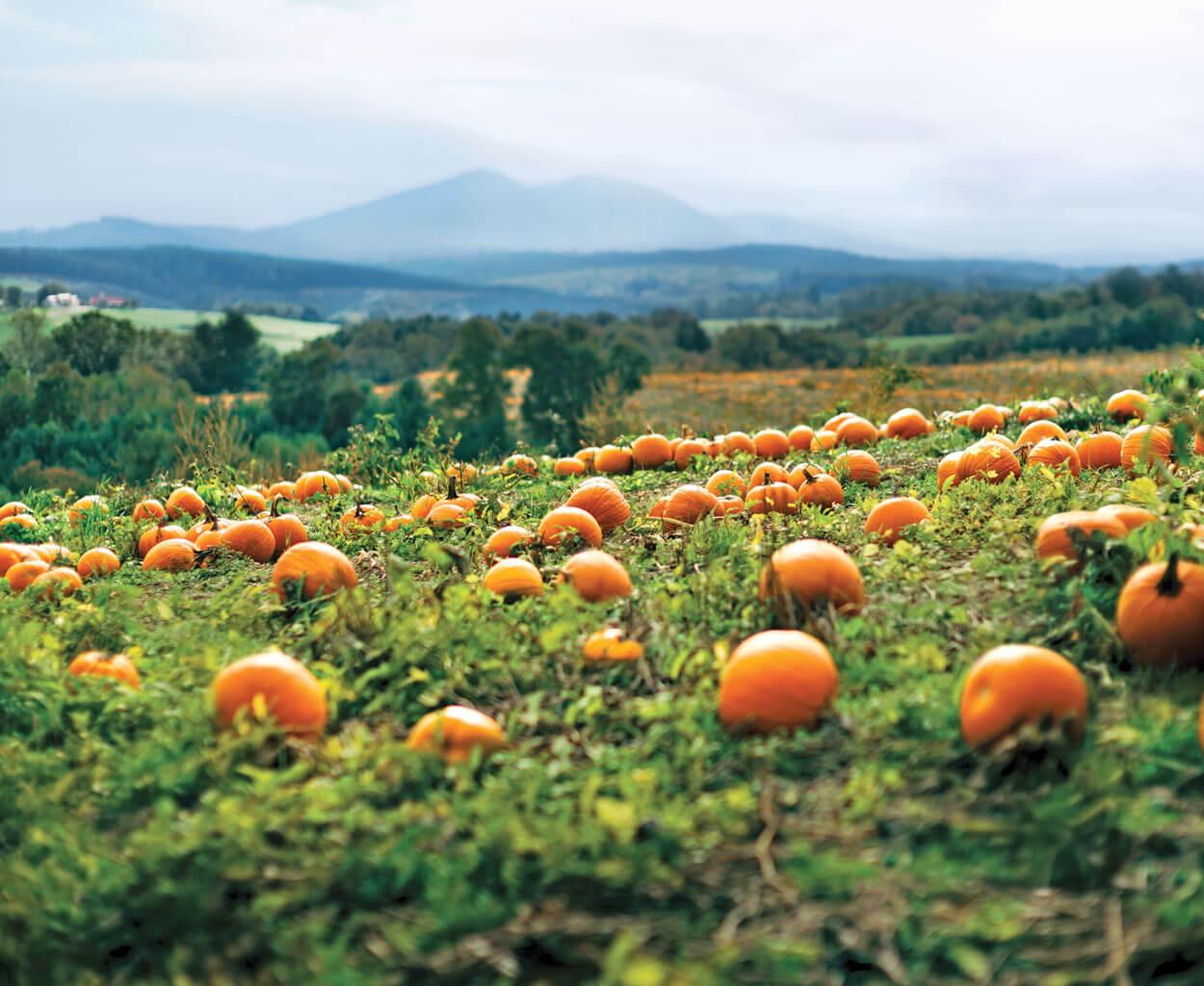 Many North Carolinians will proudly place a Bottomley pumpkin on their porch. photograph by Charles Harris

In October, serious growers from miles around tow their Dill’s Atlantic Giant pumpkins to Raleigh for the State Fair’s Great Pumpkin/Watermelon Weigh-Off. Andrew Wolf drove 10 hours from New York to have his 1,090.5-pound behemoth (pictured) crowned champion. After last year’s weigh-off in the North Carolina-grown and international divisions on October 12, the colossal fruits were moved — gingerly — into the Exposition Center to be displayed. When the fair ended, the growers came back to collect the seeds — each carrying the potential to grow into a winner. 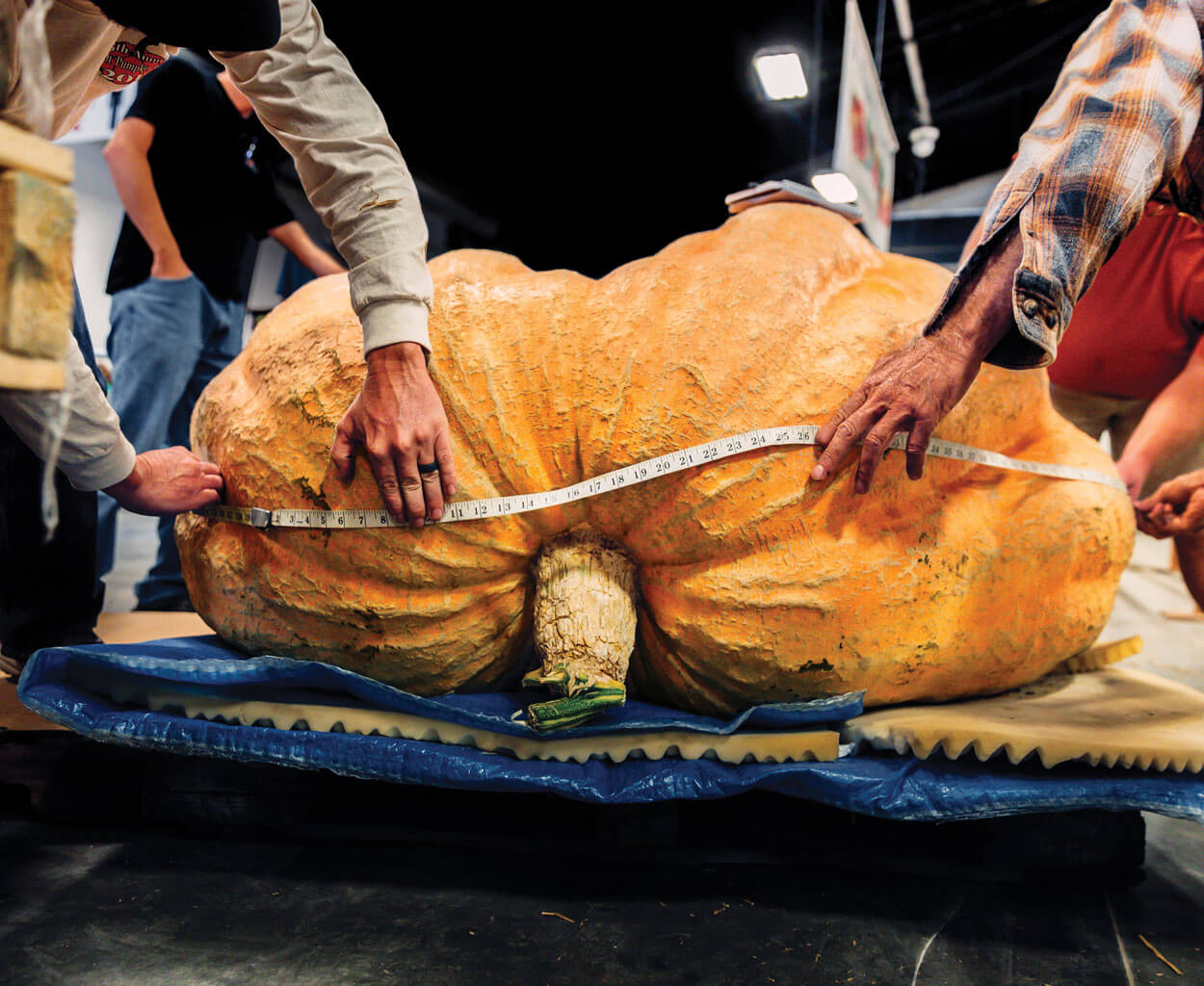 Here they come down hilly Phillips Street, cheered on by the crowd, some pumpkins bouncing jauntily off-course and others barreling past like cannonballs. Now in its 22nd year, Franklin’s PumpkinFest also features costume and pumpkin pie eating contests, food, arts and crafts, and street performers, but the World Famous Pumpkin Roll is surely the festival’s most memorable event. In 2016, the winning pumpkin rolled 1,021 feet to beat out 674 others. On October 19, 2019, purchase a pumpkin downtown — or bring your own — plot your path, and let ’er roll. 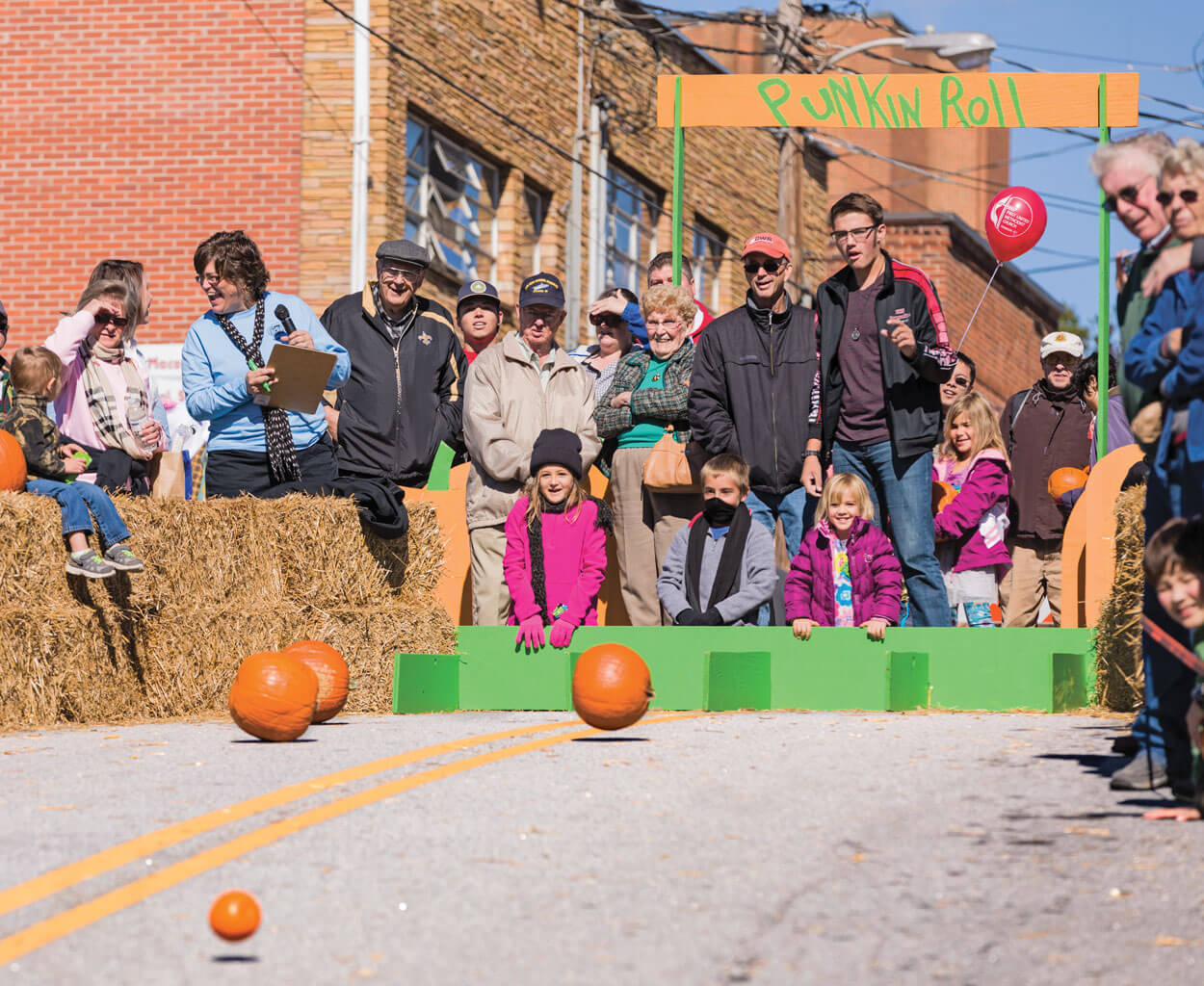 Tim Trudgeon chats as he coaxes a character from the side of a pumpkin, describing his process and his preference for field pumpkins — a heritage variety whose thick shell accommodates greater detail. Trudgeon has spent most of his life working with wood; he was a Cub Scout when his grandfather taught him the basics of carving. He can carve just about anything, but his passion is finding the faces in wood — and, for the past 30 years, in pumpkins. He keeps a mirror in his Mocksville studio for inspiration, and he tries to inspire others, too. Pumpkins, he points out, are an easy place to start carving. “I always encourage people to give it a try,” he says. “If it ends up looking horrible, make a pie. 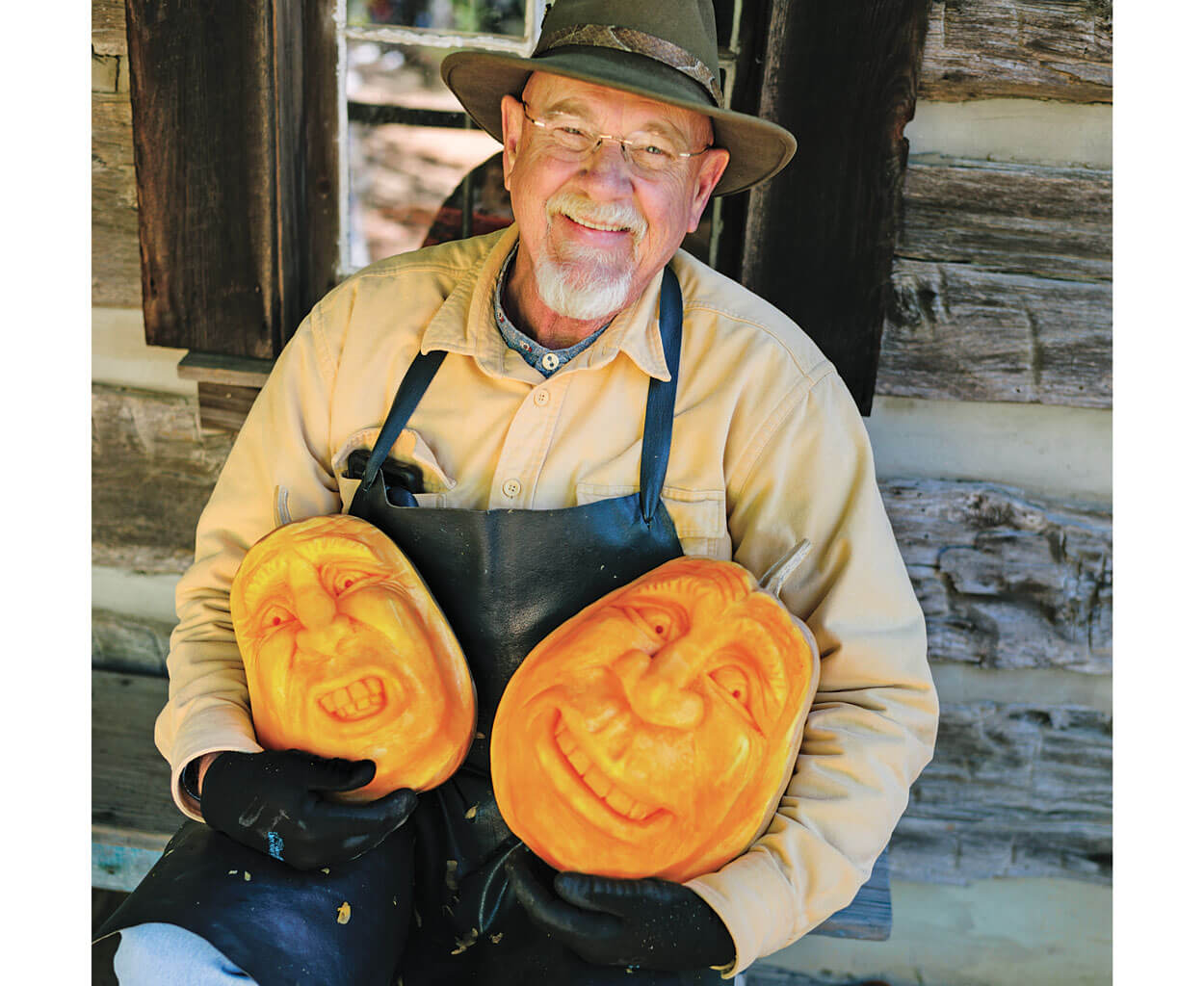 The excitement starts first thing in the morning a day or two before Halloween: The chefs and gardeners of Fearrington Village gather bright and early to carve 80 large pumpkins and 25 turnips, arranging them on hay bales and transforming the community into a festive wonderland. On October 30, when the families arrive with starry-eyed children decked out in costumes, they’ll be welcomed with warm drinks and cookies, hot dogs and chili, live music and open shops, and a special spooky storytime at McIntyre’s Books. At its heart, this pre-Halloween tradition is a celebration of the Fearrington staff’s creativity. 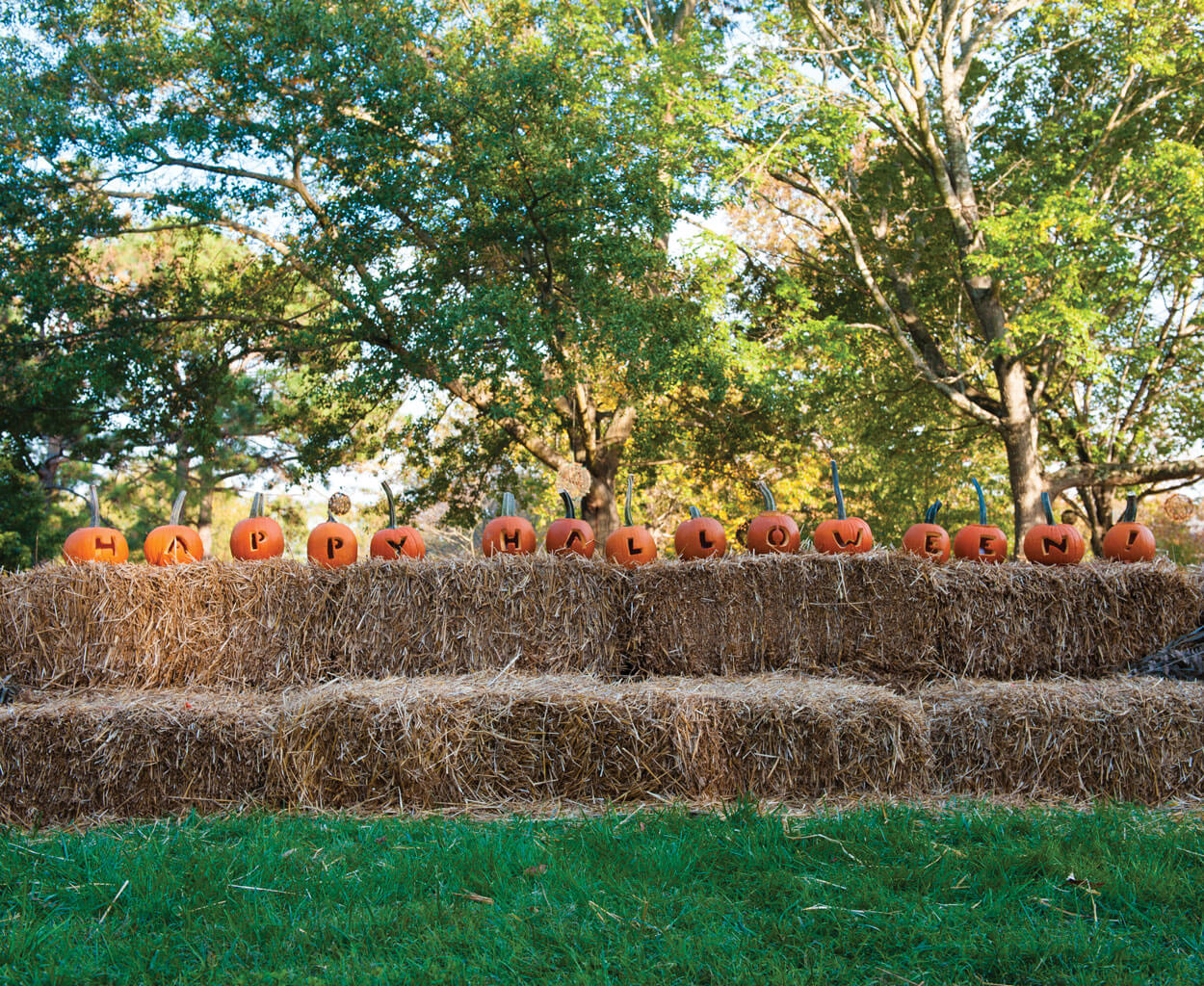 This year’s Pumpkinfest will actually be a pumpkin walk around Fearrington Village held October 30. photograph by Bryan Regan

A hundred thousand pounds. That’s how much pumpkin K&W Cafeterias, headquartered in Winston-Salem, sources from Yadkin County farmer Joey Bullins for pies every year. After the pumpkin is peeled and blanched, about 50,000 pounds remain, or 50,000 pies’ worth — a pound of pumpkin goes into every pie. The recipe is a longstanding tradition: Bakers in each of K&W’s 32 bakeshops — one in every restaurant — have been using it since the 1930s, making it one of the oldest in the company’s archives. It’s a comfort to know that even if you’re traveling, you can step inside the closest location for a little taste of home. 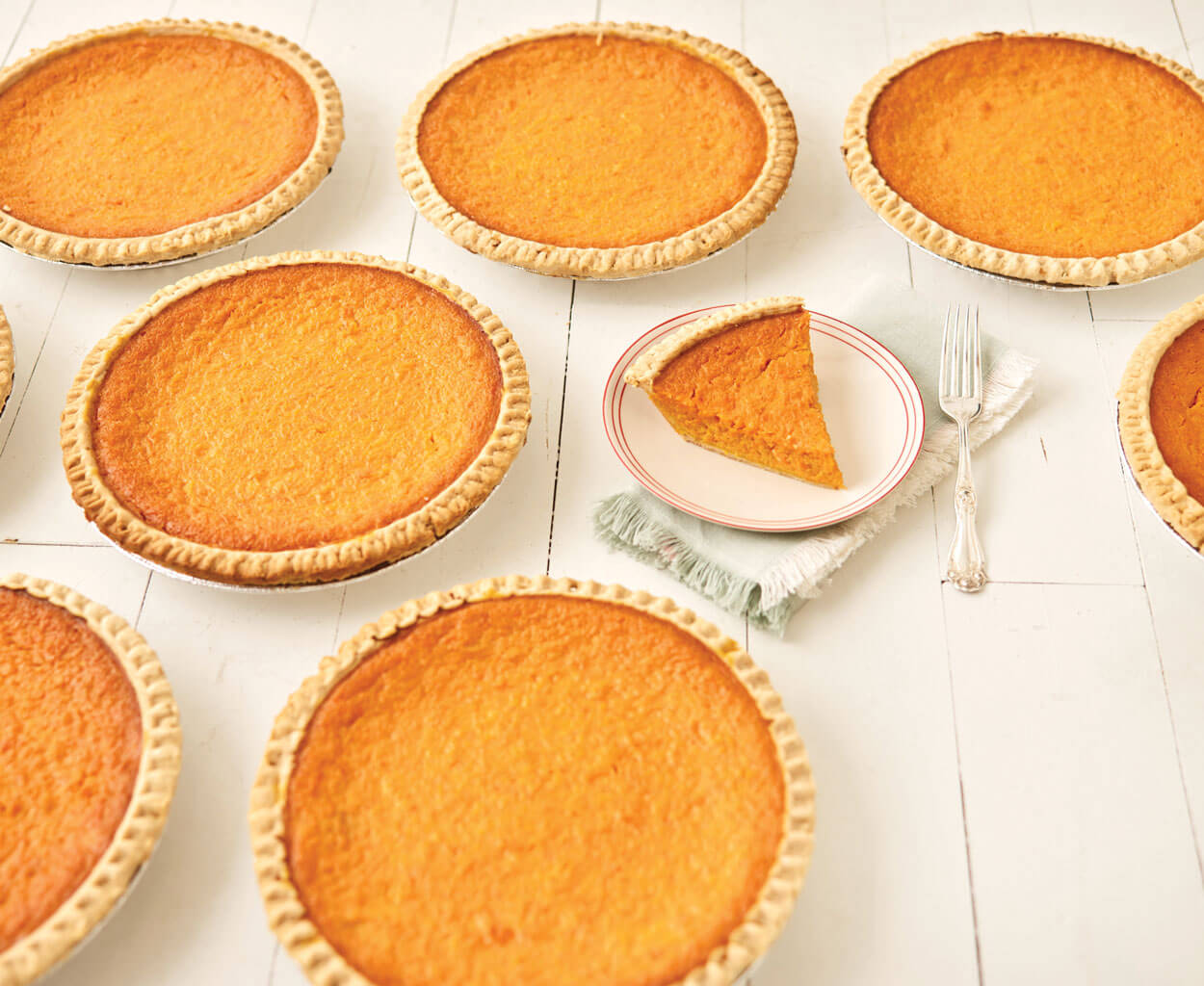 A pound of pumpkin goes into each and every pie K&W Cafeterias bakes. photograph by Joey Seawell

Known around town as “the pumpkin church,” Mount Pisgah has been hosting a pumpkin patch to raise money for its youth program every October since 1990. Unloading two shipments of pumpkins, assembly-line style, and manning the patch every day for a month means plenty of opportunities for parishioners of all ages to pitch in. Every fall brings a chance to deepen their connection with each other, and with the Greensboro community. 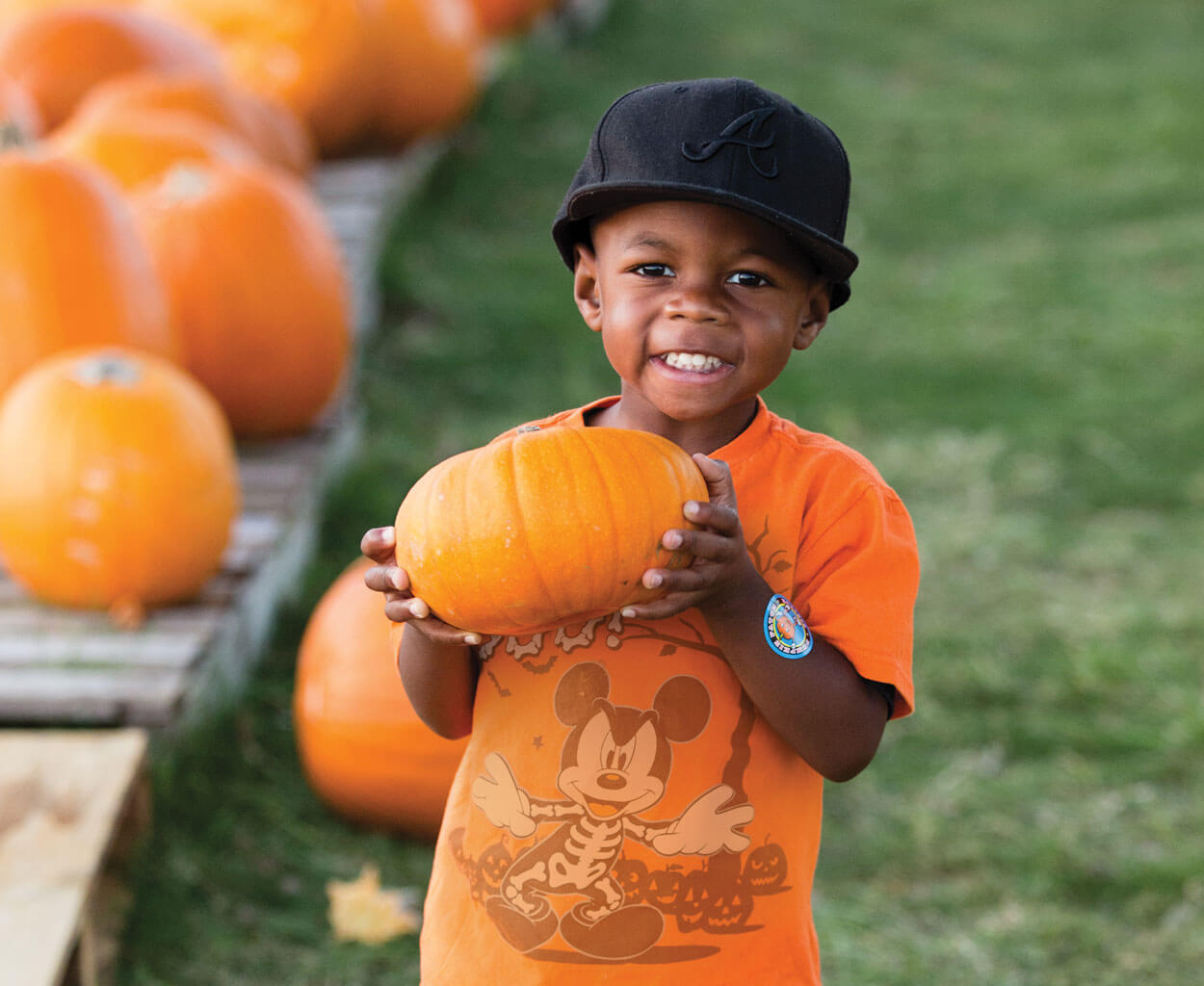 On September 28, 2019, Mount Pisgah Church opened for its 29th season of The Patch. photograph by Jon Black

A visit to Grace Episcopal Church is a sweet fall tradition, one many Asheville families document in yearly photos in front of the church’s red doors. When they pick a pumpkin to take home, their money helps feed Haitian children in need; last year, the volunteer nonprofit Consider Haiti raised $10,000 through the patch. On the lawn of this charming stone church, parents and children share a special connection and a lesson about giving — all with the purchase of a pumpkin. 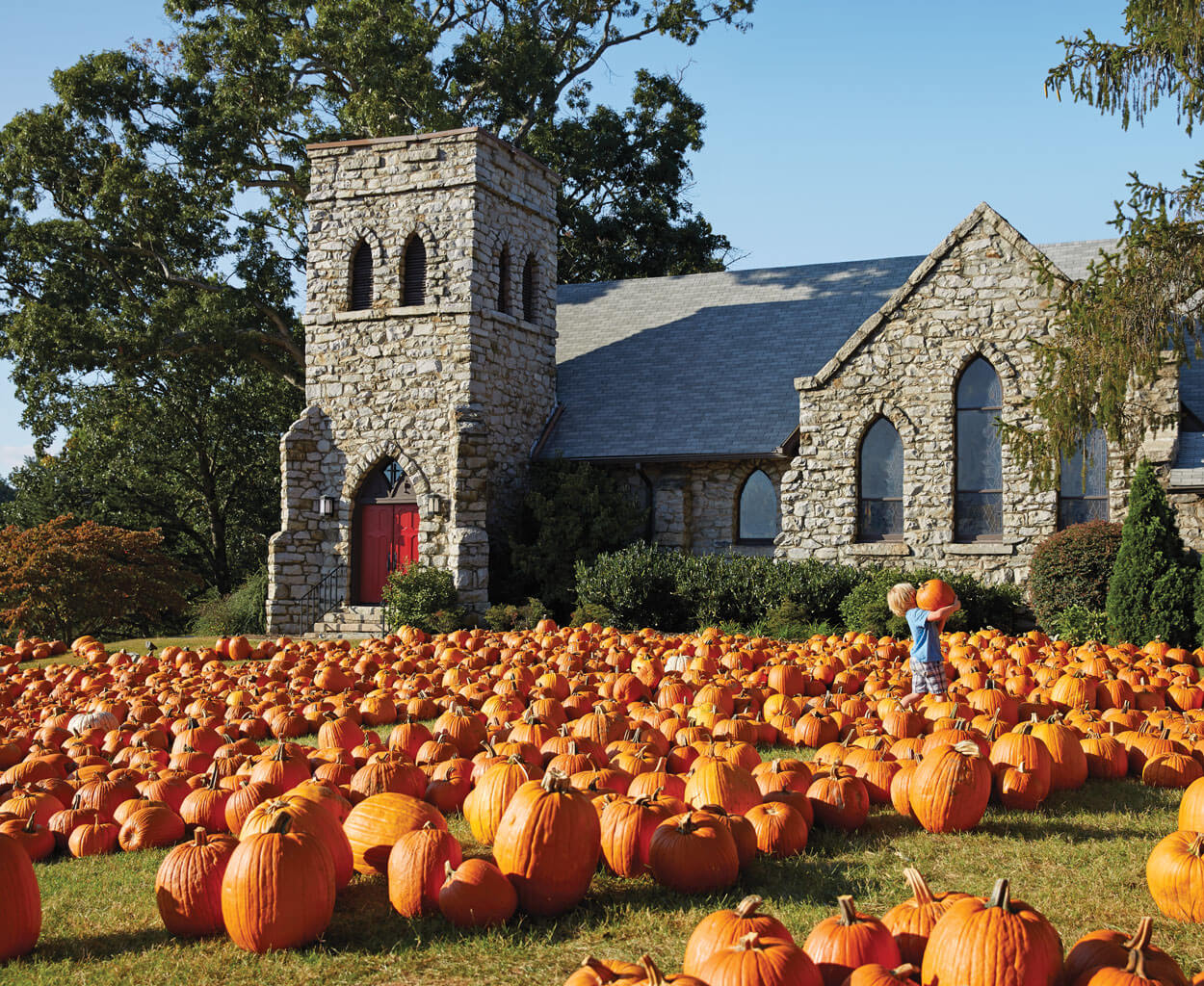 Pumpkins are for sale throughout October. Pick up a pumpkin and take a photo in front of the church’s red doors. photograph by Johnny Autry