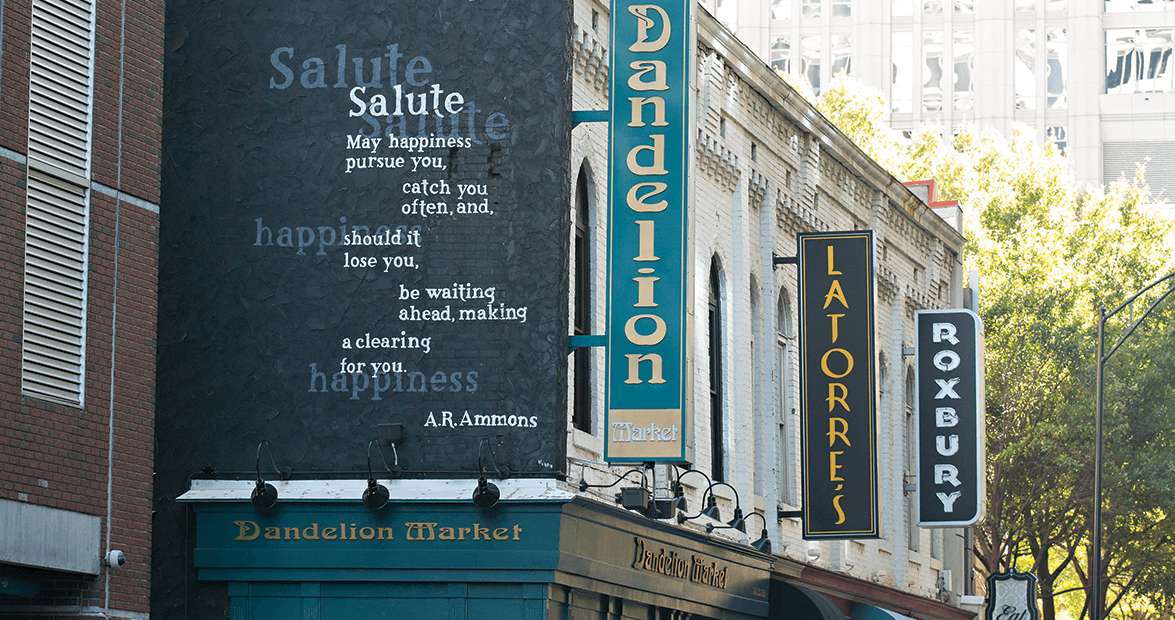 The buildings on either side of West 5th Street funnel the wind, blowing smells from a Thai restaurant down the sidewalk. The sounds of uptown Charlotte, jackhammers and the white noise of traffic, bounce off the bricks and windows.

Lunchtime is ending. A steady stream of professionally dressed skyscraper residents walk briskly back toward Tryon Street, A.R. Ammons’s “Salute” above them, an Irish blessing from a North Carolina poet who grew up on a tobacco farm. Most gaze straight ahead, focused on returning to work. Some block out the world with earbuds, their eyes cast downward at iPhones. Few look up.

More people looked up when Amy Bagwell and Graham Carew got the OK to paint the poem on the side of the building. Bagwell is a teacher and poet and Carew is an Irishman and painter. They’d seen wall poems in other cities. They wanted them in Charlotte.

Bagwell wrote Ammons’s late widow a seven-page letter to ask for her blessing. Carew asked the owners of the Dandelion Market if they could paint their wall black and the words white. Students at Central Piedmont Community College helped design it. Reporters came. Oh, neat, they said. Charlotte didn’t have one of these before.

More poems arrived. There’s a Jon Pineda piece, “Memory in the Shape of a Swimming Lesson,” up on the side of a crumbling bail-bonds office near the arena. Some drivers hesitate at green lights to read the final few words. New works, written on vinyl, are glued to the backs of news kiosks on South Tryon Street. All are from North Carolinians. Bagwell and Carew want even more, in more colors, some at eye level, some higher, enough for either a walking tour or to stumble upon. The poems reward you for unplugging for a moment, Bagwell says. The real world is at street level. The clouds, the tops of skyscrapers, and the poem on West 5th are ethereal, up where the dreams are.

Down on the street, the routine has returned. Men walk past in expensive slacks. Women talk with their hands. They grumble about unqualified coworkers and short-staffing. All seems lost, until the gas lamps under the poem catch the eyes of two women and draw them up. Down the street, they remember it. “Something about happiness,” says the one with the black hair. They keep walking, past the words that have folded into the fabric of the city, there for you, if you look up.

Read the poems and find mural locations at www.wallpoems.com.