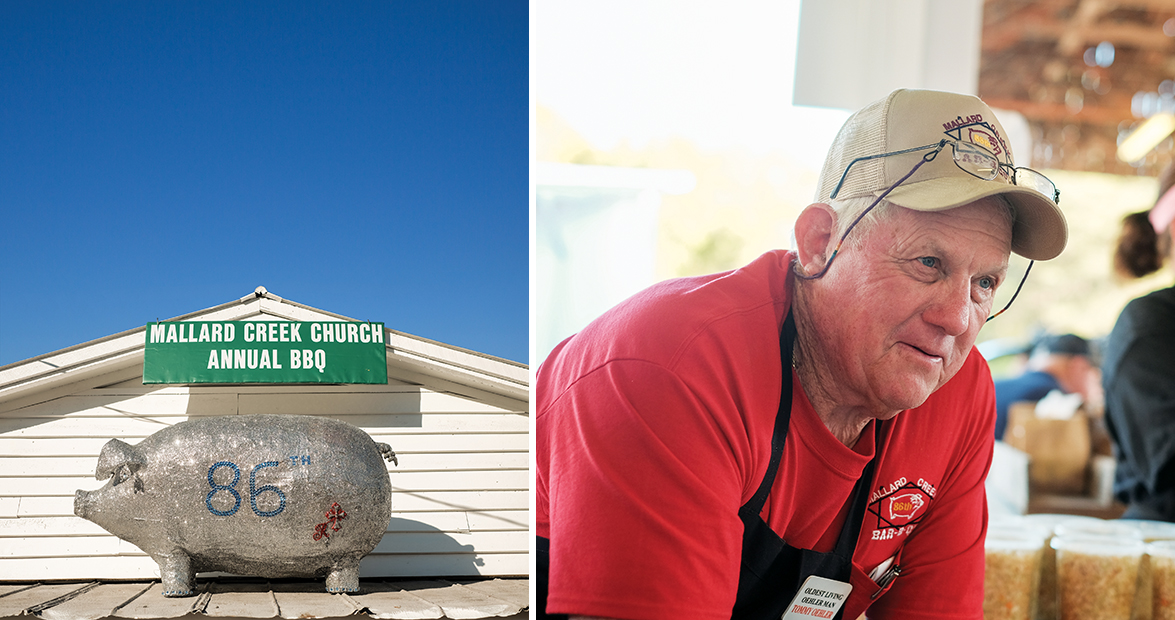 Henry Burns has spent his 86 years in Hickory. “Ain’t no better place to live,” he says. Fifty-two years ago, Henry started his own construction company, and he just kept at it until he finally retired at 81.

Now that he’s got some free time, though, Henry wants to see what he missed during those decades at work. He kept hearing about a church barbecue in northeast Charlotte, the biggest in the state. It’s been around even longer than he has. Thousands — tens of thousands, from old-timers to middle-age executives to high-schoolers to toddlers — sweep onto land owned by Mallard Creek Presbyterian Church every fourth Thursday in October. It’s a kind of bring-your-own political convention, too: candidates for the school board, U.S. Senate, and soil and water conservation board set up booths, hand out fliers, and court voters.

That part doesn’t appeal to Henry, who’s more interested in eating pork. He’s seated at a picnic table under an awning on a bright early afternoon, having laid waste to healthy portions of pulled pork, Brunswick stew, and mustard slaw. Three of his friends in their 60s and early 70s chuckle to themselves, tickled that they’ve shepherded Henry down to Charlotte to cross an item off his before-it’s-too-late list. “I heard about it for years on TV,” Henry remarks. “I wanted to come down here and see.” He turns to his pals. “And we did, didn’t we?” The atmosphere is joyous. The company is lovely. The history is interesting — 88 years this thing’s been happening! Right here! At the same spot!

Henry’s favorite thing about the Mallard Creek Barbecue? He looks you straight in the eye. “Eatin’,” he says.

You can almost fool yourself into thinking you’re not on the edge of the nation’s 17th-largest city. The torrent of Charlotte’s growth eddied out here, where a quick look around reveals whitewashed clapboard buildings, a baseball diamond for the Optimist Club, trees, and more trees. Only the steady traffic on two-lane Mallard Creek Road, streaming to and from a fresh section of interstate that completed Charlotte’s beltway loop last June, reminds people that they’re in the city, and what city they’re in.

This is the Community House property, a former school complex that the church bought in 1932. The old school building faces the road. Behind it sits the cookhouse, a low-slung, L-shaped structure and a covered, open-air dining area with picnic tables and pea gravel that crunches underfoot. (The actual church is about three miles away, near another interstate interchange and a shopping center.)

The Boy Scouts and Optimist Club use the grounds on occasion. But for most of the year, the property sits cordoned off and silent. The hickory stacks and mini cookers wait in the shed. 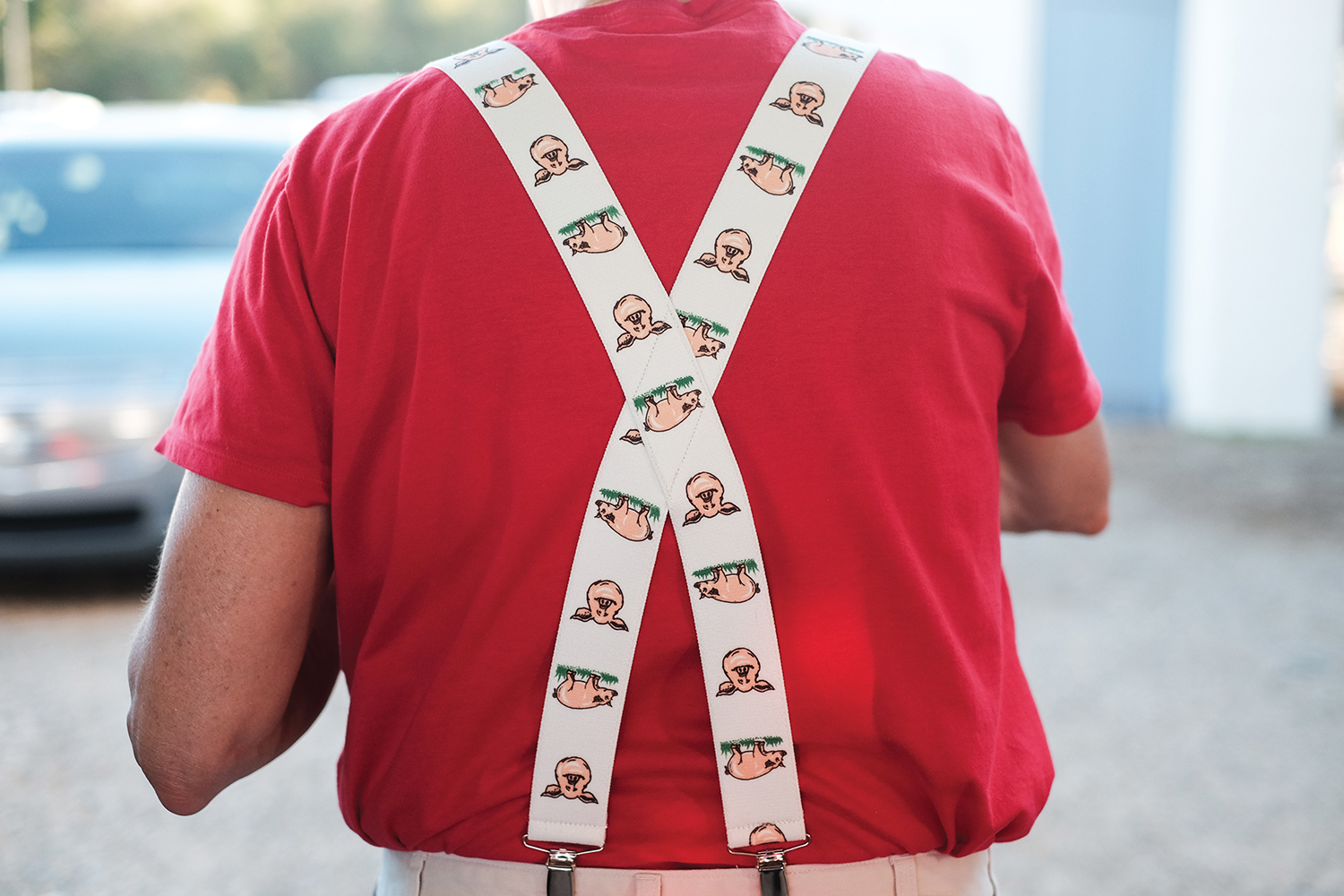 The Oehler (pronounced “Ayler”) family keeps track of such things. It’s been their show since the church deacons cooked “three or four pigs and a goat,” according to official church records, and sold cheap ’cue to raise money to pay the contractor who had just finished the new Sunday school building. It was October 1929, when people did anything they could to make money and eat.

J.W. Oehler Sr. was the event’s chairman for the first 15 years, followed by his son, J.W. Oehler Jr. He turned it over to his three sons, Donnie, Craven, and Tommy, in 1978.

“I handle takeout, Donnie helps cook the meat, and Craven takes care of all the facilities,” says Tommy, 78, clad in a black apron, Mallard Creek Barbecue cap, and a pin that reads “Oldest Living Oehler Man.”

The Oehlers buy their pork from a supplier. They used to go whole-hog, but that was too much work and a big mess. “Now we just use the butt,” Tommy says. The meat stands out for its typicality: Your basic North Carolina shredded pig, complemented by a thin, peppery, eastern-style vinegar sauce.

The real treat, though, is the Brunswick stew, whose rice-based richness is thanks to a recipe Tommy says the family has used as long as he’s been alive, if not longer.

Tommy gestures toward the four rows of cars lined up outside of the old building and the assembly line of family members conveying plastic quart containers of pork, slaw, and stew to open windows and wallets. “That’s my daughter, my grandson. That’s Craven’s daughter in the pink shirt over there,” he says. “It’s been like this since 8 o’clock this morning. It doesn’t stop.”

Around the corner, back toward one of the parking lots, winds the politicians’ rope line. The church never meant for the barbecue to turn into campaign central. But anchoring it to the fourth Thursday in October set it at the stoop of Election Day. The politicians went where the votes were waiting in line for a plate. They still do.

The church never meant for the barbecue to turn into campaign central.

In from the parking lot, wearing slacks and a tie, strides Richard Vinroot, the statuesque, white-haired lawyer and former Charlotte mayor — here not as a candidate but just another guest. He saunters down the row, shaking hands and smiling, and extends his hand to a petite blonde woman: Deborah Ross, a Democrat and former state representative from Raleigh who’s running for Richard Burr’s U.S. Senate seat.

It’s Ross’s first Mallard Creek Barbecue and introduction to Vinroot, a Republican. Doesn’t matter. “Thank you for everything you’ve done,” Ross tells the ex-mayor earnestly. “You’ve been a true public servant.” Vinroot smiles warmly, thanks her, and keeps making his way, handshake by handshake, toward the picnic tables.

The gears of democracy haven’t always meshed so smoothly at Mallard Creek. “[Dan] Quayle came here one time,” Tommy Oehler says, referring to the former vice president who sought the Republican presidential nomination in 2000. “That was one of the biggest messes we ever had.”

“I’ve been coming here since I was 8 years old,” says Martha Lawing, sitting in the awning’s shade. She’s two days shy of her 89th birthday. “As far back as I can remember, it’s been a day like this. I can’t remember it ever being bad, although I’m sure there must have been some rainy days.”

Growing up, she lived near Mallard Creek, and some of her neighbors brought her to the barbecue as a birthday present. She later married William Reid Lawing, whom everybody calls “Reidy.” Martha and Reidy can’t remember ever missing a year.

And the pair have every intention of coming back next year, too. “If we can still walk, we will,” Reidy says.

“We don’t come for the politicking,” Martha chimes in. “The food is delicious. It’s a happening. You know what I mean?”