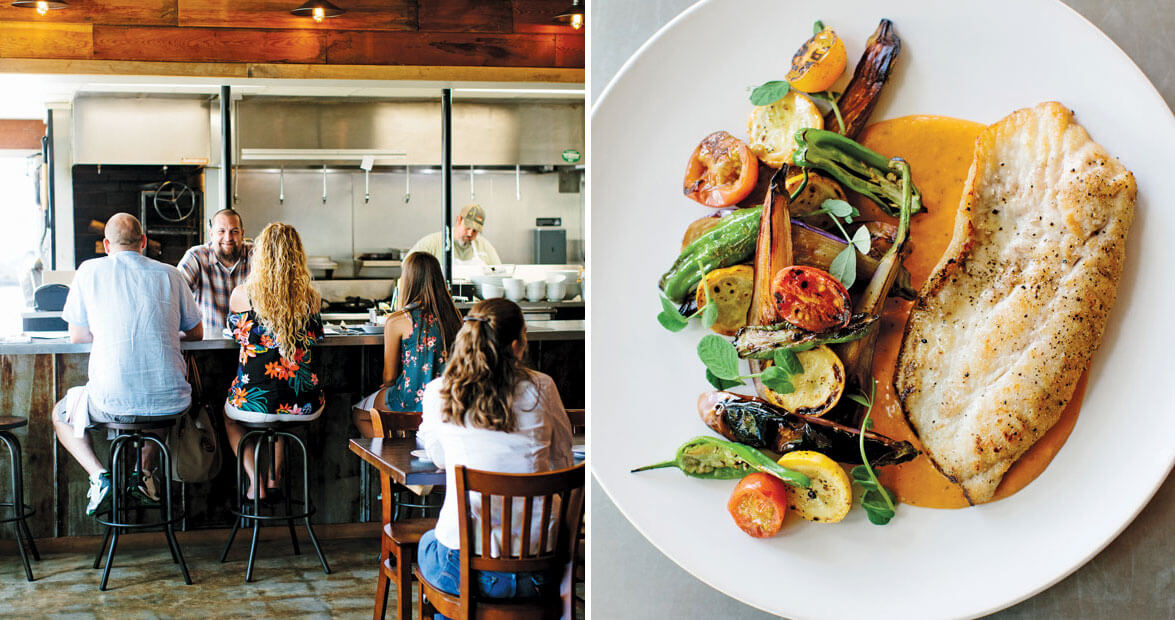 Fishing lines can reach a long way. In the hands of James Clark and Bill Hartley, chefs and co-owners of Postal Fish Company, they can run from the Atlantic Ocean all the way to downtown Pittsboro. Settling for nothing less than the perfect catch of the day, yet being visionary about what that can mean, the duo serves a mixture of upscale and down-home seafood dishes in a distinctive place where they hope guests will eat with their hands. To nudge folks in that direction, in the center of each table is a small galvanized bucket holding napkins, Crystal Hot Sauce, and packets of Wet-Naps.

What really sets Postal apart are coastal specialties rarely seen so far inland, if at all. James and Bill source ingredients for those prized dishes from a network of North Carolina farmers and fishermen — the deep-droppers, long-liners, and pound-netters — who sell their regular catch and bycatch seafood, the underappreciated fish that get caught up in the harvest of familiar (and often overfished) best sellers, like the sheepshead and pompano that come up with the flounder. The uninitiated may refer to this plentiful, sustainable seafood as trash fish, a term that James adamantly opposes. “There’s nothing trashy about it,” he says. “It’s lesser-known seafood hauled out of the same ocean in the same nets. To throw back — or throw out — everything other than a few species is wasteful. Chefs and eaters are missing out on too many delicious opportunities.”

James learned this lesson long ago. He grew up fishing along the Carolina creeks and coast. His mom told him that he could keep and eat anything he caught, so long as he cleaned it, which he did. His first job was in a family-run fry house on Sullivan’s Island, South Carolina, where a boss told him that he could either scrub floors or clean fish, so James picked up a knife and got busy. It was there that he first met local fishermen who delivered coolers full of the day’s catch to the back door of the restaurant. That’s how he learned not only the flavor of impeccably fresh seafood, but also the wisdom of being on a first-name basis with the people who catch the most important things on the menu.

Bill grew up fishing, too, with his grandfather along the Jersey Shore, part of a family that ate fish on Fridays. He met James when they both worked in a restaurant in Myrtle Beach, and they continued their partnership at The Carolina Inn in Chapel Hill. As chef and sous chef, they cooked up all sorts of things, but their hearts and sights were set on having their own seafood place. As Bill says, “If you’re going to cook day and night, it ought to be food you never get tired of eating, food you believe in.” 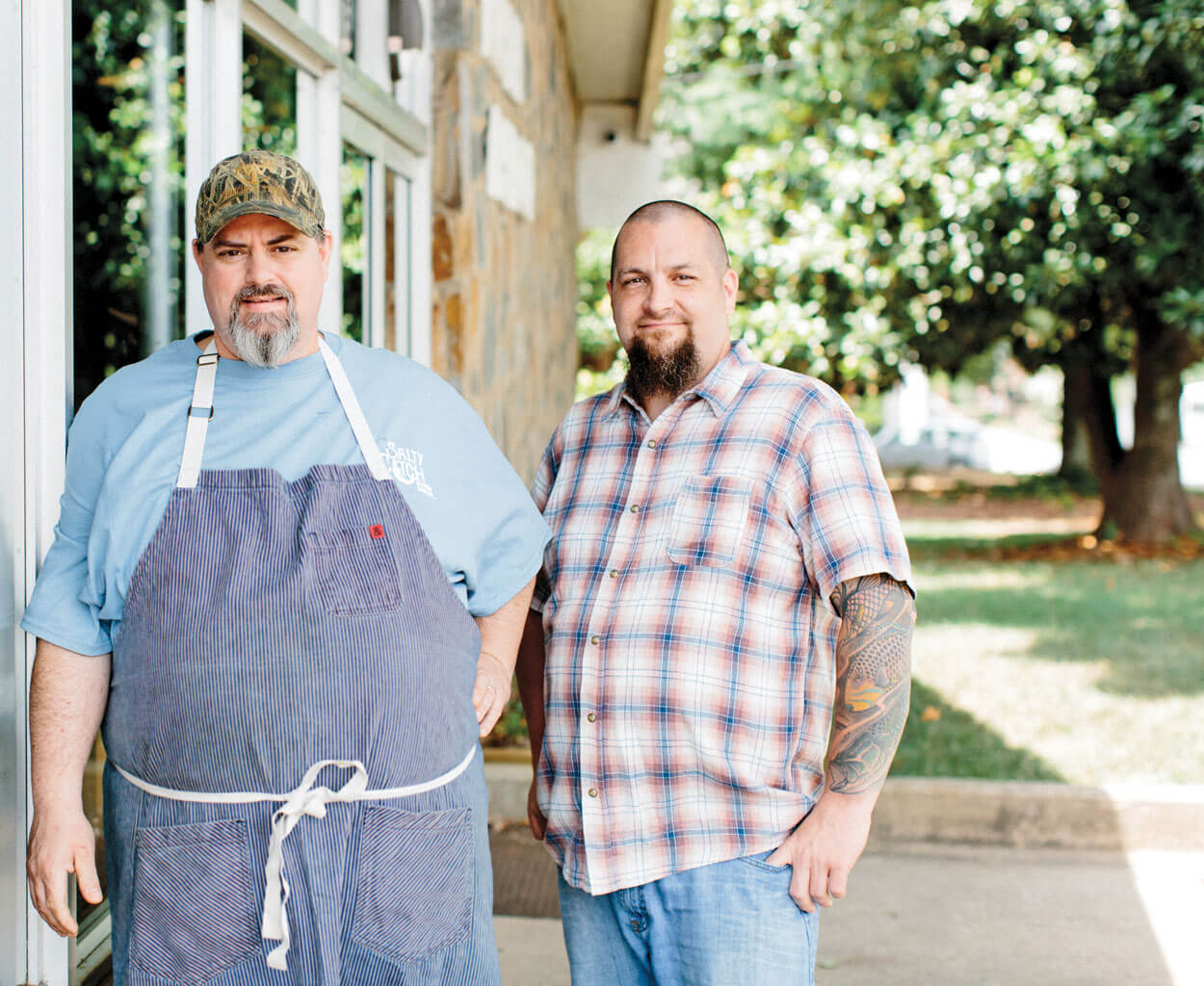 Postal occupies a distinctive mid-century building that served as a post office for 40 years, until 1997. After that, the space either sat idle or housed oddball things, such as batting cages for Little League practice. But as soon as James and Bill stepped inside, they could see that it was the ideal spot for the business they’d dreamed of; from that day forward, they called their restaurant Postal Fish Company. Before opening, they gutted the old post office’s interior, brightening the space with natural light. An open kitchen allows them to greet and chat with customers, who can, in turn, keep an eye on what’s cooking. The focal point is an Argentine-style wood-fired grill — a medieval-looking contraption with a flywheel and chains that raise and lower the heavy grate over hardwood coals. Two of their most famous dishes, roasted whole fish and wood-charred shrimp, come off that grill, as do some of their most popular side items, such as carrots and beets, which roast in the embers.

“What’s ugly on the boat can be gorgeous on the plate.”

Postal’s menu is a combination of high-end cuisine and simple fish classics, which include what James and Bill call the “must-haves,” like their Cedar Island Fry seafood platter and shrimp and grits, and plenty of the usual shrimp, clams, oysters, and softshell crabs. But what really lures local diners are the bycatch specials, like scorpion fish and triggerfish, from fishermen like Wayne Mershon of Kenyon Seafood or Steven Goodwin and Renee Perry of Salty Catch Seafood Company. Also on the list: lionfish. The viciously invasive species — that happens to taste delicious — may be new to diners, but it’s a well-known menace to fishermen. “Let’s battle them by eating as many as we can,” James says as he rattles off several more underutilized species, including the cow-nosed ray, which has taken a heavy toll on North Carolina scallops. “They ate them all gone!” he explains. “A delicious strategy to help restore scallops to the Hatteras shoals would be to eat up all the cow-nosed rays. Those things taste and look just like a flank steak when they come off our grill. It’s a dream come true for people who can’t eat red meat but still crave a good steak.” 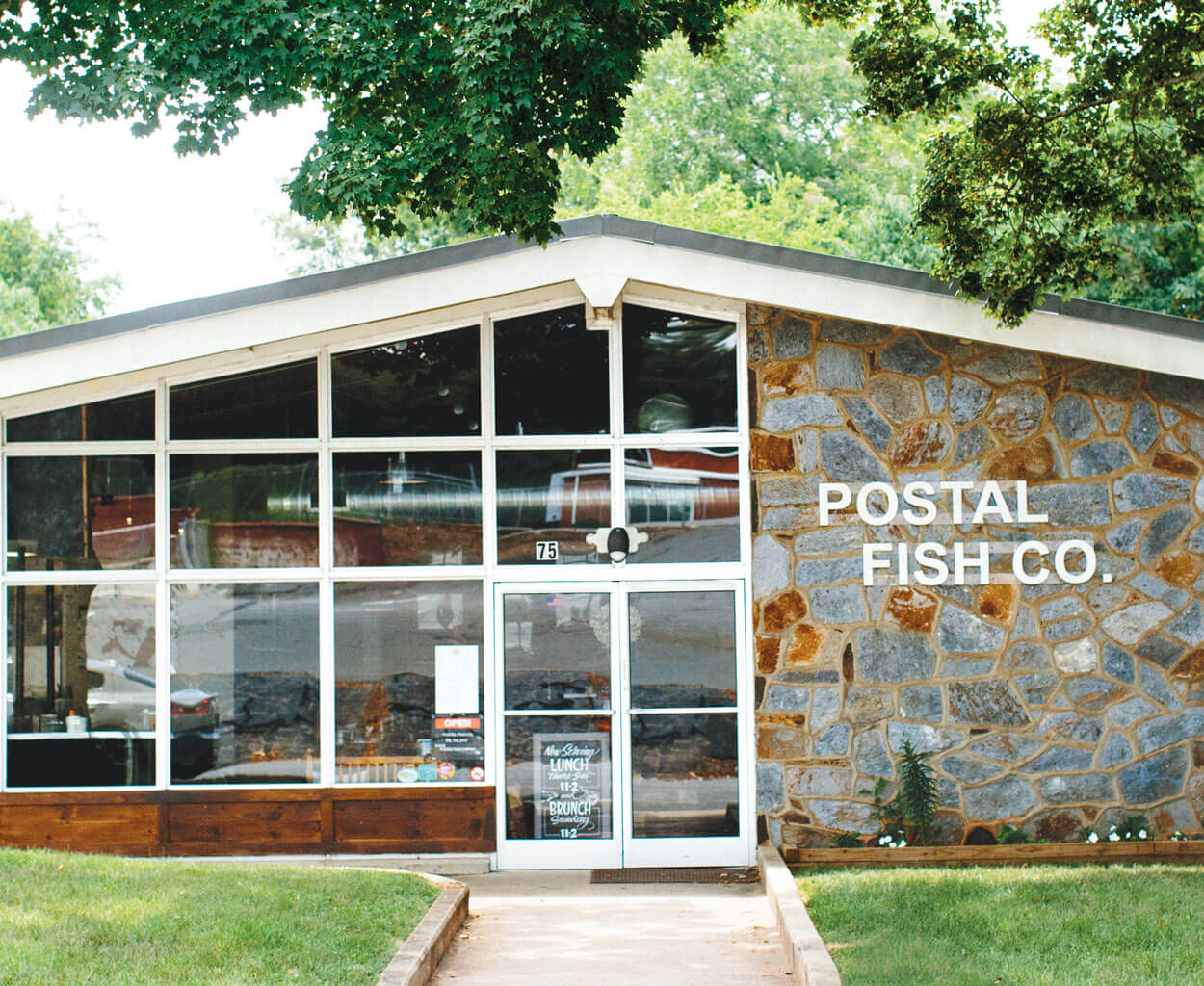 Both chefs concede that some bycatch creatures are unattractive, which doesn’t help them gain traction with seafood shoppers. “But what’s ugly on the boat can be gorgeous on the plate,” James counters. “People are still talking about that time we got all those sugar toads” (a type of puffer fish, not a frog). The Postal guests lucky enough to get a seat at the oyster bar that borders the open kitchen — the best vantage spot to chat with James, Bill, and the other cooks — got an earful about the fried treats. “The trick,” James says, “is to eat them with your hands.”

Postal’s patrons know to save room for the desserts created by pastry chef Marcey Clark, who happens to be married to James. They met as students at the New England Culinary Institute. Marcey grew up around the lobster pounds of New Hampshire, but at Postal, she applies her expertise to the sweet side of the menu. Her coconut cake is always on the list, alongside daily specials such as cobblers, walnut tarts, or strawberry hand pies.

Many fine meals at Postal include a tipple from Bill’s extensive collection of spirits, including more than 50 varieties of whiskey. “I’m always on the prowl for things you won’t find in most places,” he says. That sentiment seems to be a guiding principle at Postal: When Bill and James tell you they’ve got some delicious lion- or scorpion fish, or some piping-hot sugar toads, it’s no fish tale. “Our guests who have come to trust us are willing to give new things a try,” Bill says. “Our regulars know to ask for them.”