It takes a little Nickens two-step to get rolling, but once our feet are on the pedals, Julie and I are hard to miss. The vintage tandem bike is nearly 60 years old, fire-engine red, and eight feet from one end to the other. Steering its heavy, all-steel articulated bulk is like riding a giant caterpillar made of springs.

Our house in the Promise Land district of downtown Morehead City puts us within an easy cruise of the town’s stunning waterfront with restaurants, bars, shops, and a fishing fleet that heads home in the late afternoons and draws a crowd to check out the catch. In the other direction, we can pedal to the Dairy Queen in less than 10 minutes. We barely have to spin the tires to reach the sandy beach of Bogue Sound. For Julie, a fine weekend is marked by bike rides and boat trips. If we’ve pulled off three or four days without driving anywhere but down to Portside Marina, she’s a happy gal. 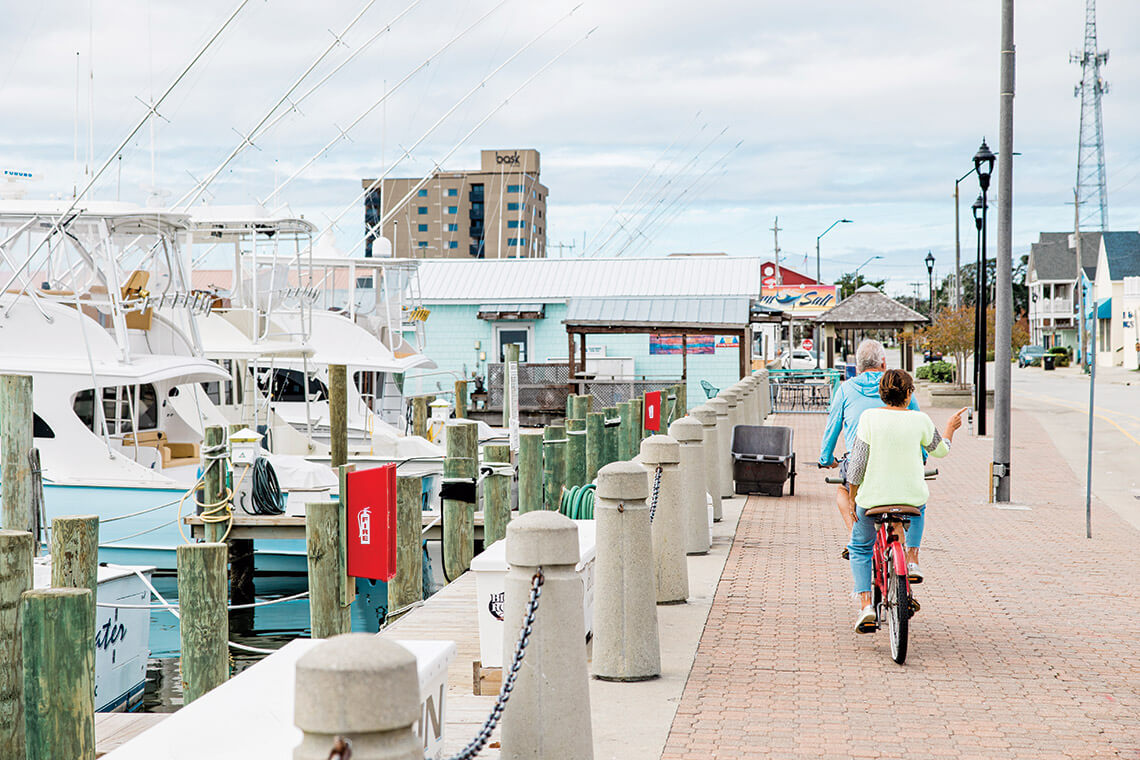 From their home in the Promise Land neighborhood, the Nickenses are a short bike ride away from the Morehead City waterfront. photograph by Matt Ray Photography

We hit the end of our block and hang a left on Shepard Street, which runs straight toward downtown. If there is a more blissful neighborhood for a bike ride than the Promise Land, I can’t imagine. Settled by fishing families from the nearby barrier islands after a series of monster storms smashed the old Shackleford Banks villages in the late 1890s, the Promise Land is made up almost entirely of smallish lots and streets lined with crape myrtles. They remind me of the live oak alleys that lead to palatial country estates, except that this is more of an Everyman’s streetscape, marked with the old homes of fishermen and shopkeepers. There are McMansion monstrosities in the Promise Land, and more coming. But it still retains a just-us-folks vibe, mostly lacking in pretension. The broken-down jonboat in my side yard helps.

We cruise past children’s tricycles parked haphazardly under live oaks, pedal through the scent of a charcoal grill, see beach towels hanging from porch banisters, and listen to the trilling notes of laughter from neighbors mingling in the yards.

Wherever your relationship is headed, a tandem bike will get you there more quickly.

A few blocks from home, the view suddenly brightens as the trees recede and sunlight washes over the street. The transition from quiet neighborhood to bustling downtown district is abrupt, and suddenly, we’re biking past restaurants and charter boats lined up on the waterfront like show dogs. Folks throng the wharf, and the sunset crowds at Jack’s Waterfront Bar are thumping. I hear a few shouts and grin.

A couple on a fire-engine red vintage tandem bike tends to turn heads. People holler out. They point. I like to think they’re saying to their friends: Look at that hip couple there. They’ve got life dialed in. But the reality may be less complimentary: Check out those geezers. They never heard of Uber?

If you’ve never been on a tandem bike, you might think that the front rider does all the work while the back-seat biker is just along for the ride. It takes a lot of communication, however, and coordination to double up successfully. We each have to read the other’s body language and give a verbal heads-up to any shift in pedaling cadence. And Julie flies blind back there. The only view she has is an up-close gander of my magnificent gray flowing curls and broad, chiseled shoulders. I let her know when there’s a bump coming up — “Bump coming up” — or when we’re about to stop at an intersection. It’s definitely a team effort to keep from falling over at stop signs.

In tandem bike parlance — yes, there is such a thing — the rider up front is called the “captain,” and the rider in the stern seat is the “stoker.” This is a fact that I’ve chosen never to bring up to Julie, who would respond to my suggestion that she refer to me as “Cappy” by dialing back her already questionable stoking effort. A bicycle built for two — a vintage one, at least — seems to take three times more effort to pedal than a single bike. Julie admits that she will occasionally sandbag back there while I do all the work. “You’re supposed to actually push down on the pedals, Julie,” I say, sweating. “It’s not a joint mobility exercise.” There’s a reason that bicycles built for two are also known as “divorce bikes.” One thing is for sure: Wherever your relationship is headed, a tandem bike will get you there more quickly. 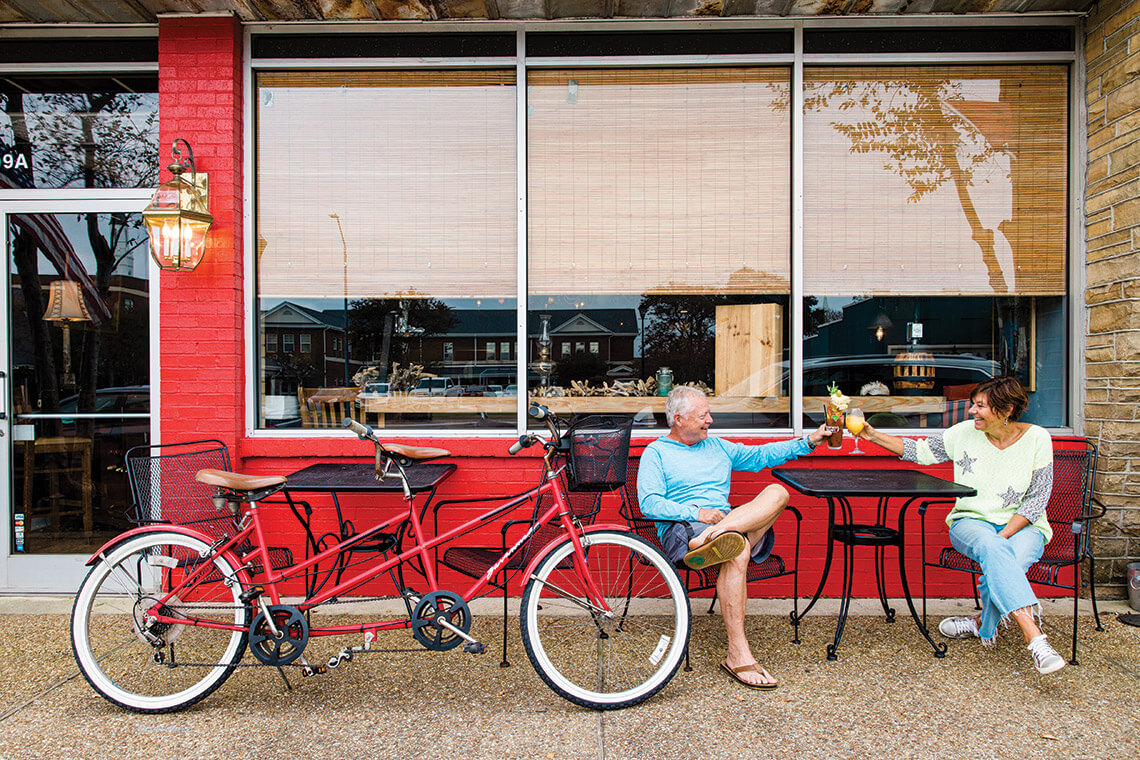 Propelling a tandem bike isn’t always smooth sailing, but brunch at Promise Land Market is a destination worth pedaling to. Cheers! photograph by Matt Ray Photography

Thankfully, on our route to downtown Morehead, the only hill we have to climb is the tiny incline up the curb to pull into Promise Land Market, one of our favorite destinations. There’s a mishmash of other bikes parked at the back door, and I roll to a stop well away from any obstacle. Disembarking from a tandem bicycle is a graceless endeavor, and I like a wide berth.

Later, headed home, there are fireflies winking in front yards, and the whine of a lone boat running on the dark sound. Porch lights and deck lights and living room and dining room lights glow from nearly every bungalow and cottage, and we glide by, unapologetic voyeurs on the dark street.

“You should paint our front door that color.”

“You should try to find a metal deck table like theirs.”

“You should think about putting in some floodlights like that.”

I should take control of this conversation, I think.

“Too much shrimp,” she replies. “The porch sofa is calling.”

So we roll toward home, in the dark, on the bike, in our beloved Promise Land neighborhood, and everything seems in sync.