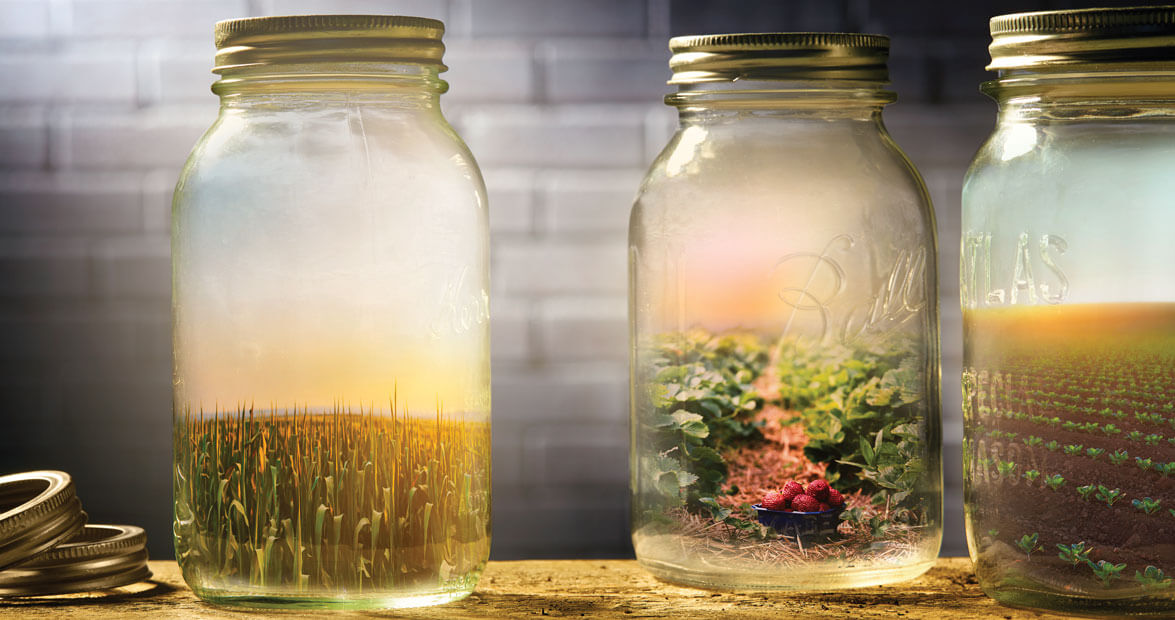 I didn’t grow up in a family that canned vegetables and put up pickles and soups and fruit preserves. And I think I know why.

I was maybe 10 or 11 years old and was down by the creek, tending a tiny stone dam I’d built to hold tadpoles and crayfish I’d scooped up with my hands, when I heard the explosion from the house. It was a great, muffled Whooof! followed by my mom’s frantic scream and my dad hollering in response. I vaulted out of the creek bed, tore across the side yard, and took the back-porch steps two and three at a time to burst through the kitchen door.

I stepped inside to find a scene of green, oozing bedlam. Collard greens greased every wall and dripped from the ceiling light fixture. They slimed the yellow Formica kitchen table and slicked every square inch of counter and floor. The air was humid and rank with potlikker. When the pressure cooker blew, it sent contrails of collards streaming all the way to the far hall. Thankfully, no one was in the kitchen at the time, so neither my mom nor dad were scalded to death by boiling greens traveling at the speed of sound, or brained with the flying saucer of a pressure cooker lid gone airborne. I could hear them consoling each other in the living room, so I slinked out the back door and headed back to the creek before I could be conscripted into the cleanup crew.

I’ve never learned precisely what caused the great Collard Greens Detonation of my childhood, although it was an event that, understandably, rooted itself deeply in family lore. Perhaps the pressure cooker gasket seal failed. Perhaps my dad didn’t clamp the top down just so. But this much I know: Pressure cookers — a required implement of canning back in those days — were never again seen in the Nickens household.

I thought of that old collard calamity recently, as I pawed through the freezer at home and found what I’d hoped was in there somewhere: my last bag of frozen corn, cut fresh off the cob from Fred and Martha Senter’s farm outside Whiteville. I breathed a sigh of relief. Home-grown sweet corn is part of the Holy Trinity of required ingredients for succotash, Nickens style. I simmer butter beans from the farmers market low and slow, add diced link sausage from Smith’s Red & White, and toss in Martha’s corn with a healthy shot of Cajun spices, keeping the heat on just long enough to cook through but hold on to a bit of sweet crunch. To me, that succotash tastes like the entire summer season in a single pot, and each bite feels like I’ve hit the defrost button on a cold winter day.

On cold winter days, when the world has gone brown and bare, there’s something uplifting and hopeful in the hunt for what’s left of ripe fields.

Eventually, my mom worked through her pressure cooker phobia. Now, each summer, she works side by side with Martha to put up the harvest from the Senters’ farm, and I’m a beneficiary of the bounty. Mama rarely shows up at my door without a few jars of pickles or preserves, or a small cooler of frozen vegetables. There were years when my Christmas stocking bulged with hand-labeled Ball jars in lieu of fruit and candy. But by this time of year, the rows and ranks of pickles and jams and freezer bags of put-up corn have been whittled thin over the winter. Summer harvest is months gone by, and planting time has yet to come. It’s the time of year when I rely on the foresight and hard work and goodwill of others to season my meals and remind me that winter is but an interlude.

Martha freezes packs of collard greens and cut corn in one-quart bags, flat like slices of bread, and I line them up in the top freezer rack. They are a Rolodex of bounty: collards, corn, green and red bell peppers. Because we don’t have a pantry, and kitchen cupboard space is always at a premium at my house, I keep the jars of those culinary gifts in a cardboard box in the basement laundry room. Over the years, the little journey down the steps and into the dark basement to sort through the box has evolved into a rewarding ritual. Mama writes the contents of each jar on leftover Christmas gift labels, in a tight, neat script much like her own mother’s: “Bread n Butter pickles July 2018.” “Fig preserves.” “Strawberry jam.” On cold winter days, when the world has gone brown and bare, there’s something uplifting and hopeful in the hunt for what’s left of ripe fields and kitchen counters groaning with produce.

So down to the basement I go. It’s the closest thing I have to a root cellar these days, and I find my way past the laundry baskets and bicycles to the cardboard box beside the stash of light bulbs and cleaning supplies. The jars clink and rattle as I sort through what remains, and as their number grows fewer and fewer, I know that planting season is growing nearer. Winter is followed by spring, which ushers in summer, and despite the cold damp around me, I can almost see Mama and Martha in the big kitchen in Whiteville, the house shaded by pecan trees, their conversation and laughter spilling out of the windows, the harvest of a lifelong friendship that’s too good not to share.