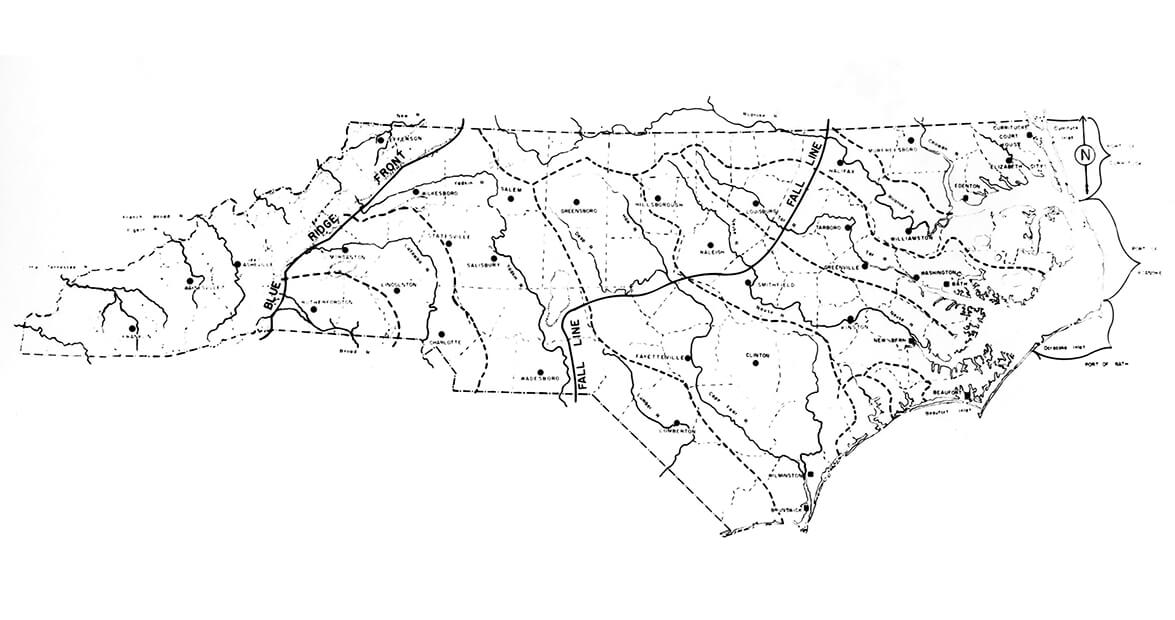 I cast upstream, against the rocks, where the Roanoke River braids through bony rapids like water pouring through the fingers of an outstretched hand. The fly sinks through paisleys of current, and the first fish strikes as I strip in a single handful of flyline. It’s a hickory shad — it has to be a hickory shad, here in April, up against the falls — and as the fish turns to surge upstream, I can feel its head-shaking, its dives and twists and turns telegraphed through the slender reed of graphite. The fish runs at will for a few moments, up the river, up to where the rocks stair-step down through whitewater, until it tires and holds in the seam between fast water and slow, blocked by the rapids.

And let’s hold up right there, for a moment as well, for this isn’t a fishing story, not really. It’s about what’s brought us together, the hickory shad and I: those rocks across the Roanoke, and the water rushing down, and the sense that there’s a dramatic shift in the offing here, and one that has little to do with the turning of spring. Looking upstream, toward the west and north, another ledge of weathered saprolite breaches the river, the water stitched with seams of white froth. But just downstream, the river slows and flattens and makes a great sweep towards the east, swallowed in a green maw of low-lying forest.

Standing in my johnboat, I can see that the very surface of the earth here at Weldon has cracked and tilts eastward, throwing up a bulwark of stone across the river. My fish has made it as far upstream as he’s likely to get. I can’t get my boat much farther up the river, either. Sailors and explorers from the 17th century shared the feeling. We’ve all butted up against the fall line.

When it comes to visual displays of tectonic power and geomorphological wonder, I think we can all agree that some parts of North Carolina got the short end of the stick. The mountains have grandeur aplenty, and I don’t need to bring up the majesty of a sandy Carolina beach. The lower Coastal Plain’s gothic swamps and cathedral bottomland forests might be lesser known, but they are likewise unforgettable. Even the Piedmont gets some notable stuff, with its rolling hills and wine appellations and its chic moniker. Every schoolchild in our 100 counties knows that Piedmont comes from the Italian “Piemonte,” meaning “foot of the mountain.” 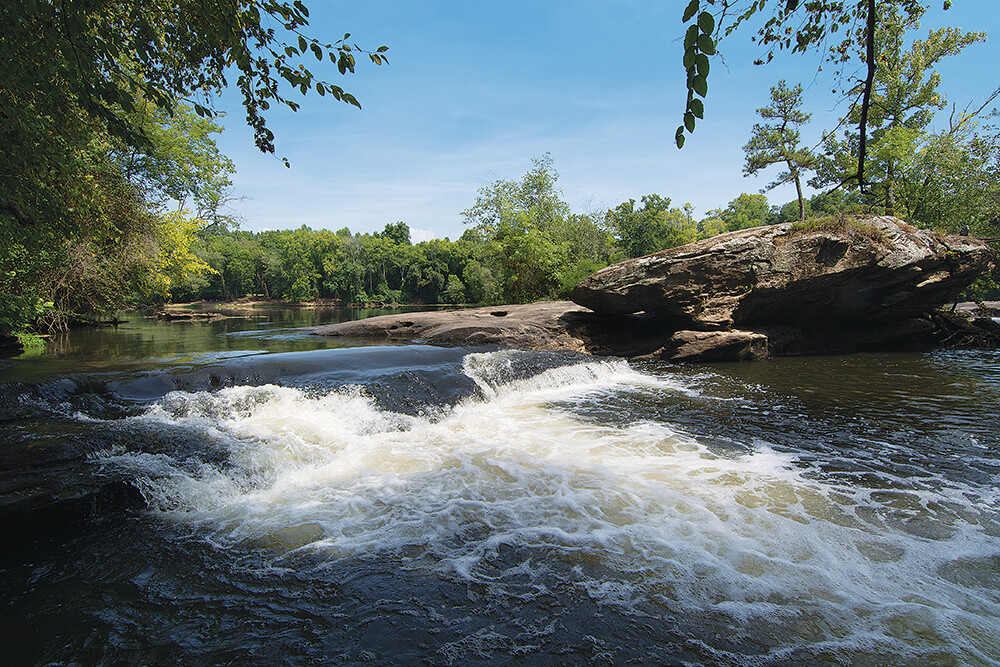 But the fall line? Isn’t that a bunch of rocks across a river? I can’t say that I’ve ever seen a postcard extolling the scenic virtues of the fall line, even though most North Carolinians have at least heard of this geomorphological feature. It’s where the Piedmont ends and the Coastal Plain begins. It’s a fracture in the earth’s crust, where the bedrock of the Piedmont dives seaward, like a bent cookie. It’s both a series of rocky rapids in east- and south-flowing rivers, and an imaginary line connecting them. To the west, the rolling hills and then the soaring mountains. To the east, a sand-filled wedge that deepens the farther you go — Cape Hatteras lies atop a sand layer two miles thick, formed from the old mountaintops of the Uwharrie and Sauratown mountains and a few million years’ worth of eroded Piedmont soils.

The fall line was a first frontier, the head of navigation for sailing ships, a border zone beyond which lay the blank slate of a continent. The river shallows made for convenient crossings — first for Native Americans, and then for settlers, and later for bridges that carried cars across the rivers. It was the place where towns were planted — Roanoke Rapids lies on the fall line. So do Hillsborough, Tarboro, Goldsboro, Kinston, and Fayetteville. Rivers rushing through the falls powered cotton and woolen spinning mills, gristmills, saw mills, forges, and furniture plants. The fall line shaped the lives and livelihoods of the region.

And it still does. The deeper my roots grow in North Carolina, the more they seem to sink along both sides of the fall line. I live with one foot in the Piedmont and the other in the Coastal Plain. I’ll eat eastern-style barbecue on Tuesday and Lexington-style on Friday. When I come home from fishing or hunting or working the dog, I can count on one thing: Julie will point out, ever so politely, that I’m constantly dragging dirt through the house. But it could be red clay or sand. Depends on whether I turned right or left — east or west — out of the driveway.

It’s funny what you think of with a flyrod in your hand. Playing that fish at the Weldon rapids, I could have sworn I smelled Play-Doh.

In the fourth grade, my daughter, Markie, faced the dreaded North Carolina 3D assignment, a project that required her to design and build a three-dimensional model of North Carolina that highlighted the state’s three primary geologic provinces: mountains, Piedmont, and Coastal Plain. Don’t go crazy, the teacher said. Don’t spend a lot of money. Use whatever materials are close at hand — modeling clay, pieces of candy, dinner leftovers, shed dog hair, whatever — to fashion a three-foot-wide model of the Tar Heel State. The teacher was unaware that this sort of assignment feeds the obsessions of a certain type of well-meaning parent. My daughter showed up with a spare piece of plywood globbed over with Play-Doh and rivers of spaghetti noodles dyed blue, which I thought was a pretty neat trick. But some of the stuff that came through the school doors wouldn’t have been out of place at the NC State design school, a few blocks over.

We’ve laughed a lot about that model. Markie insists that its construction was the most stress-inducing activity of her entire childhood, a scarring that she is certain will have debilitating impacts in adulthood. Years later, though, I’ll tell you this: She knows what the heck the fall line is, and she could sketch it out on a map with her eyes closed.

What I fear is that that may be all she understands about the fall line — that it’s a tidbit of geography, a historical curiosity. That it mattered if your family ran a gristmill or worked in a textile plant, but that was what — last century? That’s the challenge posed by geology: How to make the North Carolina fall line, the Suffolk Scarp, Triassic Basins, Carolina bays more than answers to a grade-school multiple-choice test. These are the groanings of deep time, the fingerprints of supercontinents and Pleistocene seas that once covered eastern North Carolina.

So this spring, I plan to bring Markie here, to the Roanoke River, where it all comes together. Have her stand barefoot on the bare-metal johnboat hull so she can feel the thrum of the falling water rushing underneath. Let her look up this rapid as the rocks stairstep toward the Piedmont, see the rise of the earth’s surface, sense the way the land sinks toward the east. I want her to catch a fish on its astonishing journey from the open sea to its spawning grounds in the shallows of these rocks. Maybe then she’ll understand that the fall line is a gift from deep time, a part of her inheritance from North Carolina prehistory, and no less special than the Blue Ridge or the beach.

That’s what I feel when I play the shad to the side of the boat. We’re caught between two worlds, here at the fall line. We’re at the end of something, which is the beginning of something else entirely.