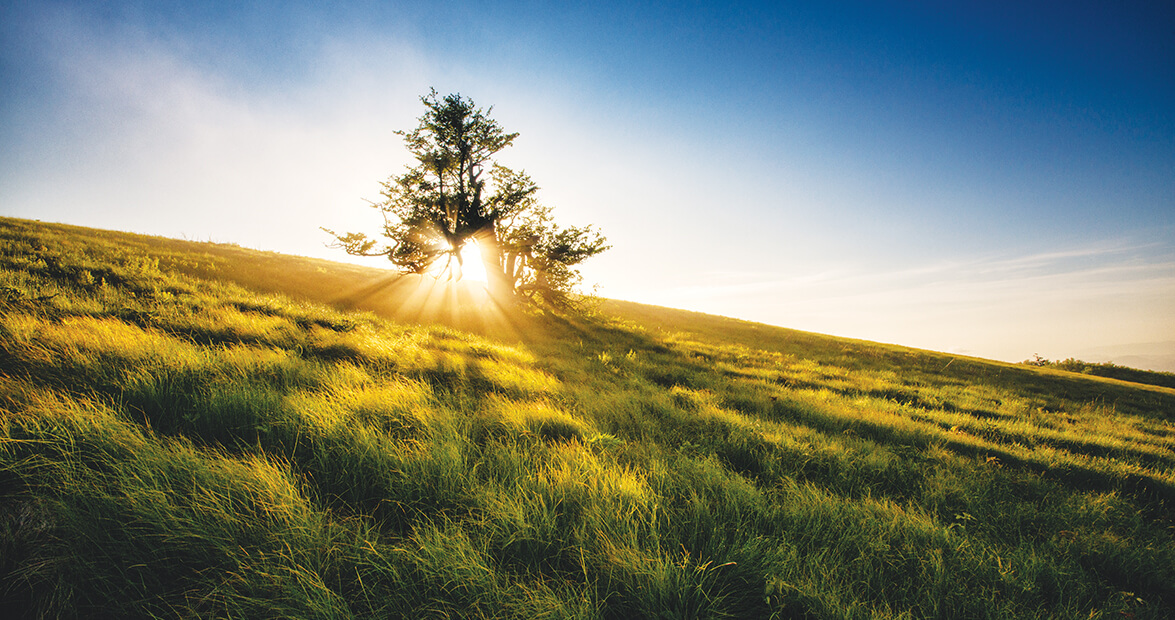 The packs were packed and loaded in the truck, the maps marked with springs and campsites, the engine running. Julie and I were headed to the Roan Highlands for a long weekend of backpacking along the famed Southern Appalachian balds, those mysterious, enigmatic subalpine meadows that mantle some of the most cherished mountains in the state. I was about to pull out of the driveway when Julie stopped me.

When I looked over, she was pale as a sheet.

“Just give me a minute,” she said as we walked back into the house, truck engine ticking. She excused herself to the bathroom as I sat on the edge of the sofa, tapping my fingers, impatient to get on with our plans.

When Julie stepped out of the hallway a few minutes later, I hopped up, ready to roll. But she was holding something in her hand, and she wore a smile as wide as the sunrise. 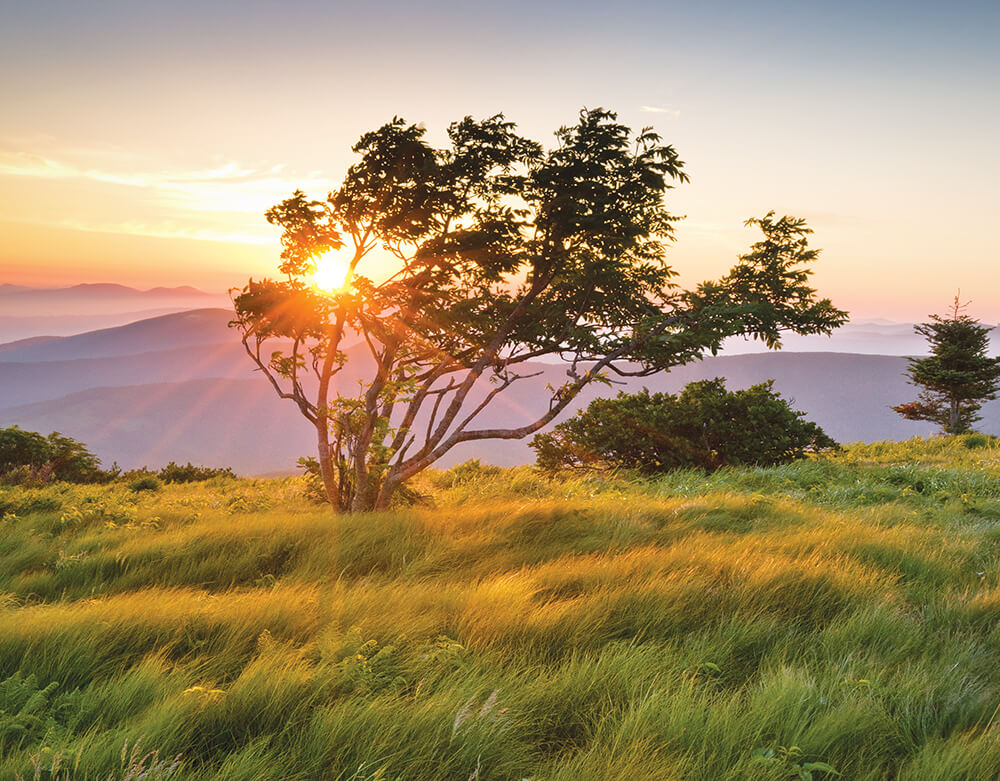 At almost 6,200 feet, Grassy Ridge Bald is one of the highest grassy balds in the Appalachian Mountains. photograph by Dale King

We’d been planning this trip for weeks. Over the years, I’d hiked and backpacked to a half-dozen balds across North Carolina, Virginia, and Tennessee, but the Roan Highland complex is the Holy Grail of these curious mountaintop meadows. Across the Southern Appalachians, there are scores of treeless peaks — some tiny clearings, others as expansive as hundreds of acres. Some are cloaked in dense rhododendron and other shrubs, but about 90 are draped with grasses and sedges, lending a tundra-like aspect to the landscape.

And while most of the balds afford wide-open views, few are large enough, or interconnected enough, for a long day of hour after hour of open-country hiking. That’s what you get at Roan, and while I was pumped about spending three days backpacking across the crest of the balds, two stripes on a Popsicle stick change everything.

Julie and I were over the moon, but we weren’t about to drop our mountain plans. Now it would be a celebratory weekend, but with a baby on board, we dialed back the intensity level of our trip. We hopped back in the truck and headed for a campground near Roan. Instead of backpacking, we’d camp at a local state park, striking out on day hikes. Giddy and terrified, we headed west, into a sort of terra incognita we hadn’t really planned.

The next morning, we started off at Carvers Gap, on the state line — left feet in Tennessee, right boots planted in North Carolina. Climbing through clumps of rhododendron and bands of dense and fragrant spruce and fir forests, we soon broke out onto the wide, treeless balds. It was like finding a Serengeti laid atop the Southern Appalachians. The Roan balds form a massive, serpentine complex, spanning nearly seven miles across the three peaks of the highlands: Round Bald, Jane Bald, and Grassy Ridge Bald. We wound around rock outcrops and through waist-high sedges, flushing birds that flitted away with wings edged in white.

We didn’t push it. We were in no rush. Even though she couldn’t have been more than six or seven weeks pregnant, Julie and I wavered between soaring bouts of elation — whooping to the skies with excitement — and moments of feeling fragile, unsure of our footing in this new terrain. For the next few hours, we danced across the rooftop of the world, sunning in warm meadows of hair grass and a host of sedges. Rhododendron and azalea bushes studded the open fields. Outwardly, nothing had changed, but inwardly, nothing was the same. Drawn by the endless views, the vernal sweep of the balds, we crossed Round Bald, playing it safe, stopping frequently, timid of a fall, a stumble, a heartbeat too swift.

For the next few hours, we danced across the rooftop of the world, sunning in warm meadows of hair grass and a host of sedges.

It’s a similar confluence of frailty and resilience that marks the Southern Appalachian balds, both past and present. The forces that shaped these meadows are something of a riddle. Some figure the balds for old settlers’ clearings or forest fire scars. The leading scientists hold that the balds’ past reaches back to the Pleistocene epoch, when a menagerie of long-vanished wildlife — mammoths and mastodons, ox-size ground sloths, stag moose and caribou and tapirs — would have maintained the boreal balds by molar and hoof. After those oversize grazers disappeared, the thinking goes, herds of bison and elk — and later, domestic cattle — would have kept the balds open. Southern Appalachian balds, in fact, are flush with rare and sensitive plant species, many of which are cold-climate holdovers, like the three-toothed cinquefoil.

With the loss of native grazers from Pleistocene peccaries to eastern elk, shrubs and trees are moving in on the balds, the way an old field eventually succumbs to cedars and pines and oaks. Government agencies and non-profits have marshaled forces to beat back the shrubs, but modern efforts to keep the balds open are a Sisyphean task. In some places, human volunteers with hand pruners and saws take a personal approach to maintaining the balds. Elsewhere, such as in the Roan Highlands, goats, African long-horned cattle, and commercial livestock have done the work.

Success has been limited. In the Great Smokies, there’s not enough funding and manpower to thin the encroaching smilax and blackberry. Two large grassy balds — Gregory Bald and Andrews Bald — are maintained, but another half-dozen are slowly converting to forest. Even in the Roan region, more than three-quarters of the historic balds have already vanished. But on Grassy Ridge Bald, there’s still plenty of open country. 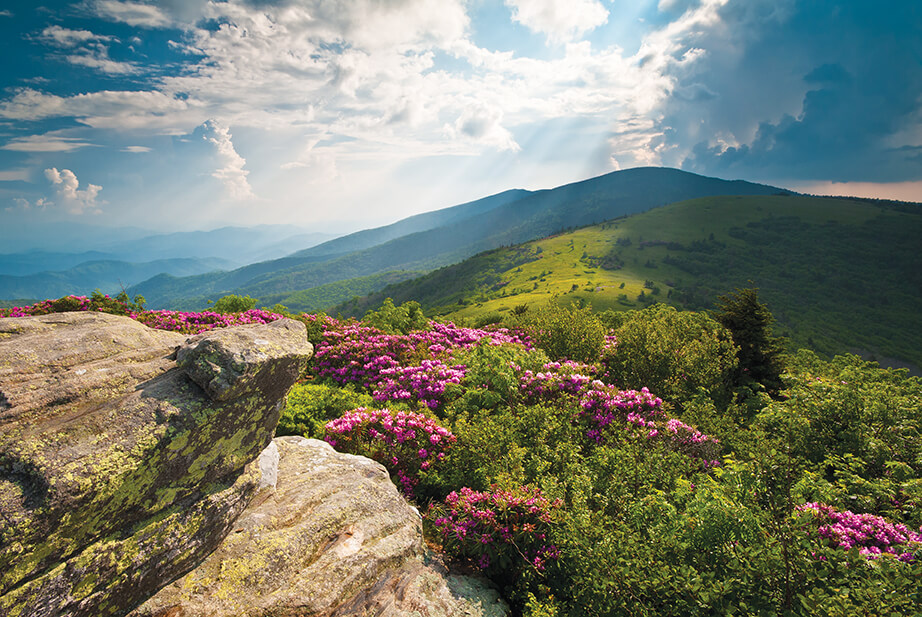 Jane Bald is one of the smallest balds in the Roan Highlands, but its big views more than make up for its lack of size. photograph by Dave Allen Photography

It’s the kind of place that typically sends my mind tromping through the past. But on that blissful weekend 20 years ago, it was the immediate future that consumed my imagination: I was thinking about babies and car seats and what the dog was going to think about a new kid in town.

Jane Bald suggests what might happen as the shrubs take over. Dense rhododendron has crept over the peak, and the trail wound through the greenery. Soon, the Appalachian Trail jogged to the north, and we turned along a spur trail headed south, toward the crest of Grassy Ridge Bald. It was a steady 500-foot climb, the valley floor 3,000 feet below, with Tennessee at our backs and North Carolina unfurled to the farthest horizons. The vistas once attracted explorers from John Bartram to John Fraser — namesake of the dark Fraser firs on the slopes below — to Elisha Mitchell, who fell to his death on the mountain that would become Mount Mitchell, somewhere in the humps of the Black Mountains on the edge of the horizon, 50 miles to the south.

Near the peak of Grassy Ridge’s bald pate, we plopped down on golden oats and grasses and pulled out summer sausage and block cheese. Julie settled against my shoulder, and we sat in the quiet, drinking it in. At our feet, open meadows fell away, studded with rocky outcrops, colored with rhododendron and azaleas. In every direction, mountain after mountain, ridges and swales, melted away into hazy horizons. All day long, we’d been talking nonstop, planning and plotting the new trail we were starting. But on Grassy Ridge Bald, we fell silent. The wind swept across the ridge, its past molded in the Pleistocene, the present scented with bluegrass and timothy. We could see forever, it seemed, and we leaned into each other, contemplating a future every bit as mysterious and wonderful as the grand sweep of the Roan balds.