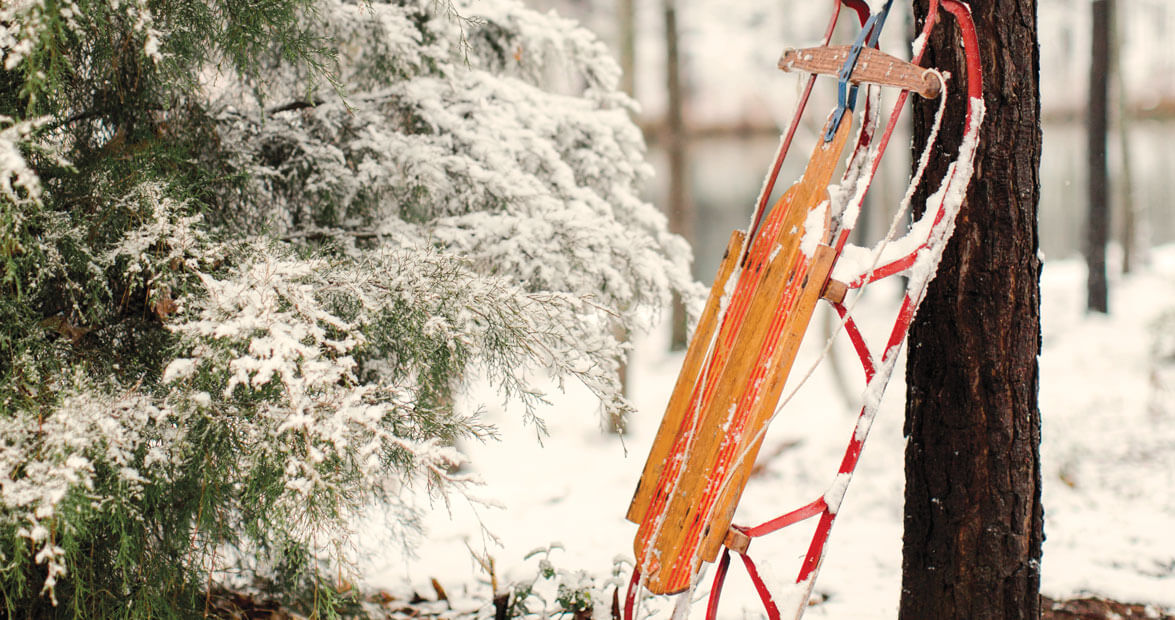 Back then, we really did get more snow, although a snowfall sufficient for a sled or a snowman was still a treat. And in High Point, my childhood home, we were always getting snookered out of a decent accumulation. Greensboro would get whacked, and we’d get an inch. Winston-Salem would shut down for a week, while on Terrell Drive, we were rolling up snowmen in a meager slurry of sopping white fluff that picked up sticks and rocks and dirt. Even our best attempts at snowmen looked like sad zombie Frostys, their hides half-shingled with oak leaves and mud.

So, make no mistake: When we did luck out with a good snowfall, one cold enough to stick around for a few days and deep enough to float a sled, we were out the door as soon as school was canceled. My crowd had a few honest-to-goodness sleds, but mostly, we scrounged up anything with a slick bottom: TV trays, pieces of used cardboard, cookie sheets, lunch trays paroled from the school cafeteria. Someone always showed up with one of those giant round antique Coca-Cola signs — massive, unsteerable whirligigs of death, rimmed with rusty edges that sent half the neighborhood kids to the doctor for tetanus boosters.

Our first stop was the big hill behind Montlieu Avenue Elementary School. Then, we sampled Circle Drive, just a couple of streets over. It sported a decent angle, although it shallowed out in such a long bottom section that it was hardly worth the hike back uphill.

But those locations were just the warm-ups. If the Montlieu hill was good, and Circle Drive was iced up solid, then we knew conditions were likely ideal at our secret little Nordic nirvana a 15-minute trudge away. We were hooked on going fast, and a little bit of danger, and High Point College had all the right stuff. 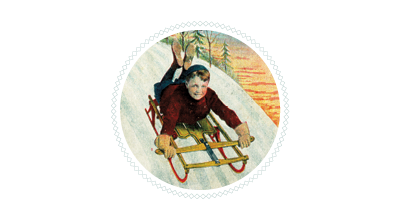 Yes, High Point College. This was back when it was just that, an institution so small that the football stadium shared its aluminum bleachers with my junior high school. But between the main campus and its athletic fields lay a steep, wooded slope, and smack in the middle of that was a long, sinuous walkway. It was armored with asphalt and had a short curb on each side, and it was about five feet across, which was wide enough for two sleds to race side by side, but not without a bracing dose of peril for all involved. The black asphalt would hold its winter solar heat, melting the first few hours’ worth of snow, which would eventually freeze, and then get blanketed with more snow, and the resulting ice path was a rocket ride for a Flexible Flyer. Holy smokes, the speed was like nothing we’d ever experienced.

You started off with a sprint, holding the sled tightly against your chest, then you flung yourself forward to salvage every possible foot-pound of momentum. The faster the start, the faster the ride, and we arrowed downhill with a complete, if temporary, lack of concern for safety. The top of the run was gently curved, and you could lean into the turns, trailing hot orange sparks and tasting copper-penny fear as the sled runners raked the short curb, bobsled style. Then, abruptly, the walkway flattened at the bottom of the hill to cross a small footbridge over a creek. The transition marked a fraught moment: By the time you hit the bridge, you were moving at a harrowing rate of speed, no matter how hard you had jammed your toes into the ice along those last 20 yards. You couldn’t stop and you couldn’t turn and dead ahead, 10 feet beyond the bridge, rose a chain-link fence with an open gate and you had less than a second after leaving the bridge to square up the sled and shoot the gap.

Most made it. Some did not. There were splintered sleds and broken fingers. I once watched my brother ride on my dad’s back, the two of them hurtling down the run like a pair of stacked turtles, teetering and tottering at 30 miles an hour, as every kid on the hill knew that clearing the gate opening was a coin toss. When they hit the bridge, the sled runners flattened like cheap wire and sent the duo into the fence. There was howling. There was blood. Our dad took the worst hit, and we all trudged home together, my brother and I pouting. We weren’t hurt, and we didn’t want to waste a good snow.

If that walkway still exists today, which I doubt, I can only imagine that it is safety-taped off and patrolled by K9 units to prevent 12-year-olds from even thinking about making that old glory run. And truth be told, if my kids were still little, I wouldn’t let them within a mile of that Arctic death trap. But I certainly remember the need for wintry speed.

It must have been some latent memory of the High Point College sledding run that inspired me one rare and fabulous snowbound afternoon in Raleigh. I drove our kids, Markie and Jack, and a couple of their friends out to the NC State University Club, whose wide parking lot was an empty sheet of snow and ice. I roped a pair of inflatable lake tubes to the pickup truck, piled them with kids who promised not to tell their parents what Mr. Nickens did, and cut big, looping, four-wheel-drive doughnuts across the snowy plain. I didn’t lose a single child, although things got sketchy when our beloved four-person banana tube took a bad hop over a snow-covered curb and exploded with all aboard, sending kids tumbling in a whirling dervish of arms and legs. I hit the brakes and skidded to a slow stop, barely breathing, watching in the rear-view mirror as clumps of multicolored fleece emerged from the snow. I counted out loud: One, two, three, four kids running back to the truck, howling and laughing. All good. But maybe my dad had the right idea, years ago. Might be, I told myself, time to call it a day.