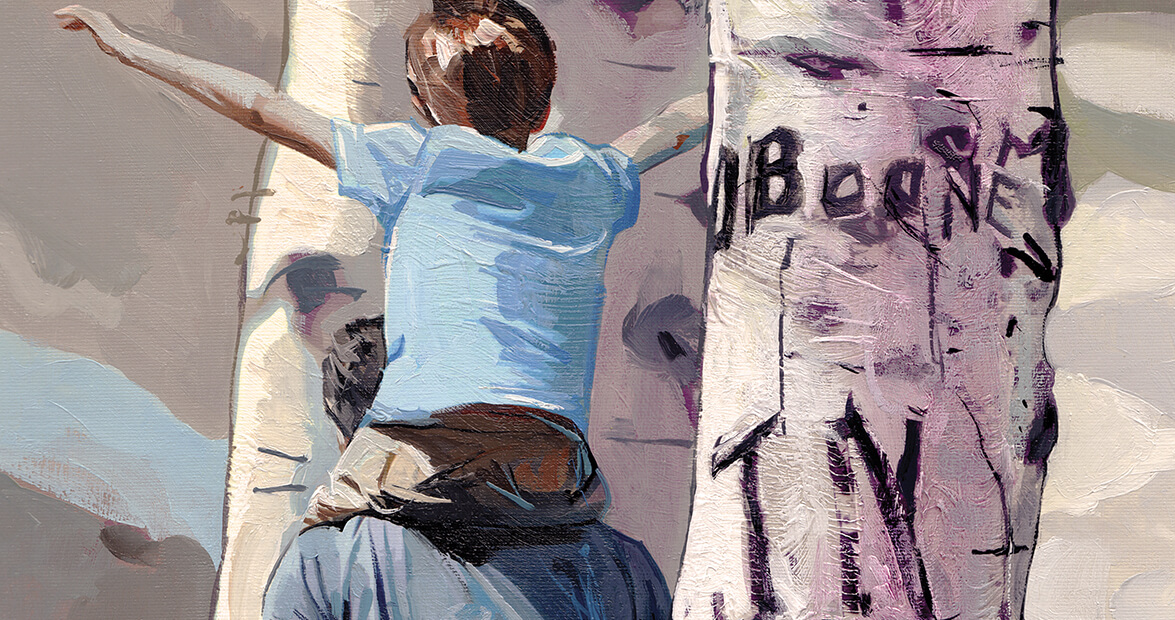 Jack, my son, was little. I had to half-carry him across the creek and up the hill, swatting aside spiderwebs and lifting him over fallen trees. I’d scouted the ridgeline for the perfect specimen, a big American beech tree far from any trail or road. It was off the beaten path. You had to know where you were going, and you had to work to get there. The tree was in a steep cove tucked below the ridge. We picked our way downhill and plopped down at the base of the trunk. The smooth bark was gray and shimmered like pewter. I pulled out a pocketknife.

First, let me say that I’m not a big carver of tree trunks. I don’t blaze my initials indiscriminately. There are a number of reasons why carving your initials into a healthy oak or beech can be frowned upon. There’s a slight chance of injury to the tree, although it’s also true that most trees will do just fine with a light tattoo or two. But carving hearts and dates on a trailside oak, visible to the public, is a tacky expression.

But folks around here can at least say there’s a long history of commemorating significant events with a quick flourish on an oak or pine. Growing up, I was smitten with tales of Daniel Boone memorializing his hunting exploits on the trunks of trees — “D. Boone,” it seemed, “cilled a bar” on half the trees between here and Kentucky. And it’s no myth at all that cryptic instructions carved into bark is a Tar Heel birthright. Lost is the meaning behind the Lost Colonists’ desperate carving of CROATOAN on a fence post, and the letters “CRO” into a tree. So maybe it’s in my blood. This occasional scoring of the back side of a tree, one growing on the back side of the woods, where the letters and their meanings are a hidden secret shared only by a few … well, I’ve been guilty of that a time or three.

The first time I carved my initials into a tree, I was in the woods behind the house where I grew up, in High Point. Deep in the woods, past the trail that forked off to my elementary school, there was an ancient beech tree with a bulging trunk. Its once-smooth bark was gnarled and pocked and scarred with carved dates and slashed initials, layered one upon the other. You had to look hard to tell where one inscription stopped and another started. The oldest date I could ever decipher from that beech tree was 1918, an inscription at least half a century old back then. I remember marveling at the letters.

As a kid, I thought you could carve your initials into a tree and come back 20 years later to find your name towering overhead, carried to the sky. But it doesn’t work like that. Trees, like most plants, grow from the ends of their branches and twigs. Carve your name as a 10-year-old and come back 80 years later, and you’ll have to bend over to read the inscription. But the letters widen and crackle with age, filling in with scar tissue and bark, and I remember the deep, unintelligible fissures in that old beech tree, and the tales they seemed to suggest. One day my buddy Tim Lassiter and I carved the letters “WW” into the tree, an abbreviation for our club of two, the Wolverine Warriors. At one point the knife slipped and slashed one of our fingers. At one point the knife slipped and slashed Tim’s fingers. We smeared the letters with crimson red, an accidental brotherhood.

I didn’t carve initials into a tree again for decades, so the second time was with my daughter, Markie. I’ve written before about the “initial tree” on an old farm where I used to go hunting.

The tree was scored with dozens of initials, and the ground around it was beaten down by the footsteps of visitors, a worn ellipse like the Devil’s Tramping Ground. Markie was just a little thing at the time, and we’d picked sweet potatoes and farm eggs before heading to the woods, and the day just seemed like the kind of day to commemorate, to mark its passing in case one day we wanted to find passage back to its charms.

Most recently, there was the beech tree with Jack. I held his hand in mine as we used the knife to score simple, blocky letters — “J” and “N.” With a beech tree, it’s pretty easy to pare away just the outermost parchment of bark, so we made shallow cuts, careful not to cut too deeply. The point, I figured, wasn’t to leave behind a lasting mark to which we could return as much as it was to incise the memory of the event — that he would remember that once-upon-a-time moment when his daddy helped him sign a tree.

Which is a good thing, as it turns out, because I haven’t been able to find that beech tree since. Jack’s grown and off to college now, and I’ve looked for the tree a handful of times, but no luck. I think I remember the ridge. I thought I recalled the cove. But I haven’t been able to find a big beech tree bearing a little boy’s initials, despite some serious searching.

The last time I went hunting for Jack’s initials, I laughed out loud at the irony of not being able to track down the missing insignia. After all, around here, we have a long history of mysteries carved into wooden sentinels, and of clues lost to time. And while it looks like I may never find that old beech tree again, I’ve taken some comfort in knowing that Jack’s initials, and our moment together, mark a place so hidden from others. I like the idea that somewhere out there, so tucked away that even I can’t find it, the letters “JN” grow old and furrowed and nearly indecipherable. Long after we left our mark on that old beech tree, it continues to leave a mark on me.