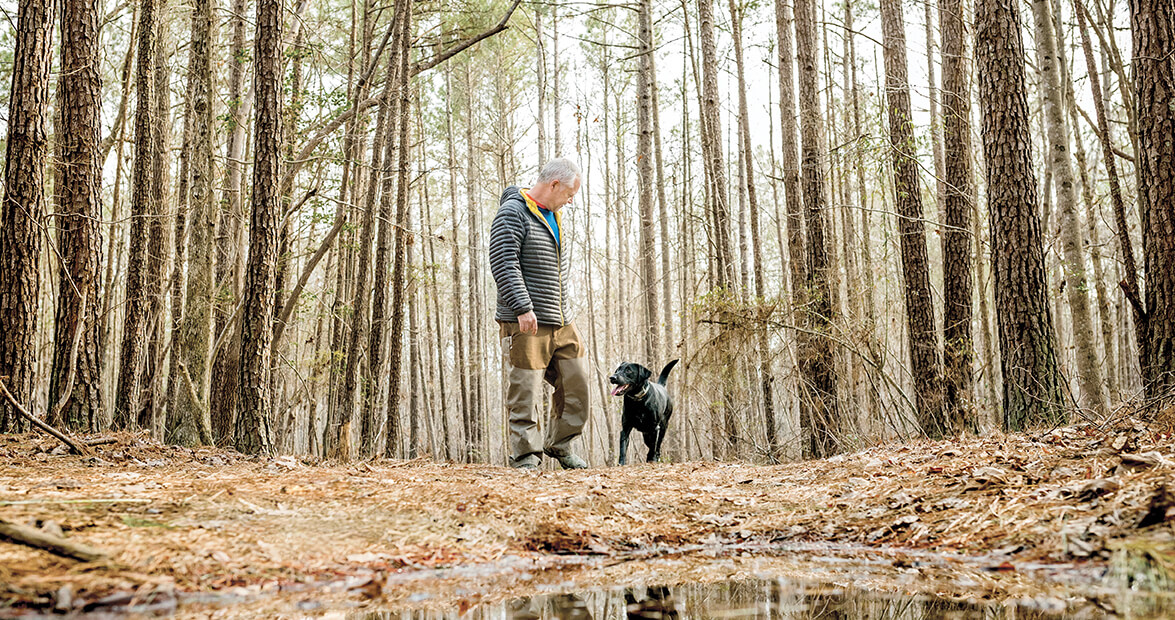 Oh, man, how I love to see her run like this. Minnie gobbles up the ground in huge, leaping strides, vaulting over rain-worn field furrows and racing down the path. It’s as if she can’t run fast enough, can’t stretch her gait long enough, and then something snags her attention — some inscrutable sound or scent or the flash of a squirrel’s tail — and she turns in to the woods without skidding sideways an inch. I stop to watch. No leash. No fences. No worries about cars or bikes. No restraints and no concrete. She races across the Carolina countryside, and it’s impossible to watch her run without feeling a similar sense of freedom and release. I cheer her on. Run. Go. Find it, girl.

Sweet Minnie Pearl is a black Labrador retriever. She’s a hunting dog, and she might be a better one if she weren’t also a bed dog, a sofa dog, a head-in-the-lap-during-dinner dog, a ride-in-the-front-seat dog who gets her own vanilla scoop when we stop by the ice cream shop. And, sadly, Minnie is a city dog, so while she gets to run more than many of her pooch pals, her day-to-day is still limited to a big backyard and a daily walk through the neighborhood.

And that walk is on a leash, tethered to municipal regulation and polite society, so I love to see her run like this. The Stillwater Hunt Club near Enfield is a sprawling mosaic of Halifax County fields and pines and hardwood swamps, latticed with trails and two-track paths, and she starts whining at the truck window as soon as we turn off Interstate 95. Now, far down a farm path, there’s nothing to hold her back. She races through the woods, appearing and disappearing in the trees, her black coat flashing like a Morse code signal in the alternating sun and shade. At one point along the edge of the swamp, she seems to vault from tree trunk to tree trunk, trying not to touch the ground. I laugh out loud. What a goofball.

And then, suddenly, she’s gone. I pull up short. Minnie is nowhere to be seen. I know what’s happened: That dog loves a deer chase like no other Lab I’ve ever met. For the most part, Minnie stays pretty close. She’ll range out 40 or 50 yards, then come flying back to check on me every few minutes. But with a snout full of whitetail, all bets are off. 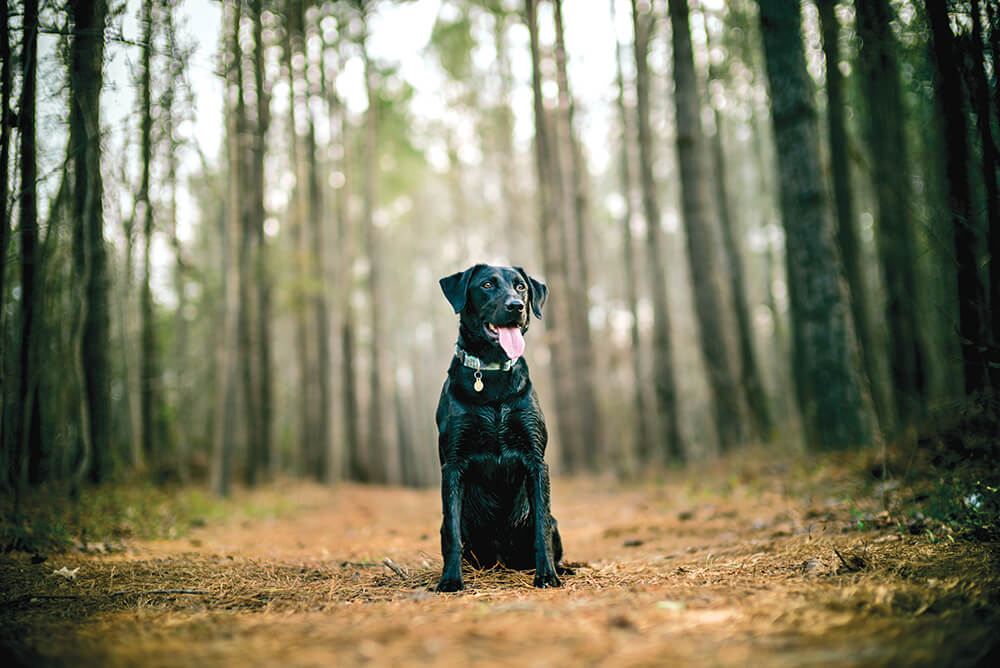 Sweet Minnie Pearl may have a Raleigh mailing address, but she loves the country and is a duck retriever at heart. photograph by Charles Harris

I whistle and holler, and move back out into a nearby field so the sounds carry farther. After five minutes, my heart starts crawling into my throat. She always comes back. She always has. Another few minutes pass, and I start to sweat. More whistling. Hollering louder. She’ll be back, I tell myself. Quit worrying. She knows the way.

When she bursts out of the woods, her tongue is halfway to the ground. The half of her that isn’t muddy is still wet and matted with cocklebur. On her face is the biggest dog-smile ever.

“You know better,” I admonish, like she understands English. Like she knows better than to pull garbage out of the kitchen trash can, too, but I still find banana peels in the living room.

She stays close for a minute or two, but I think of all those days in the yard, those miles on the leash. “Take off,” I say, holding both hands open in front of me, palms facing out. “Take off!” In an instant, she’s back in the woods.

I use that command — “take off” — as a sort of blanket permission. It’s a release command: Go on, go ahead, run, take off. Most of the time, Minnie takes a few tentative steps and then looks over her shoulder as if to ask: Really? You serious? Then she’s off and gone and rarely looks back twice.

Suddenly, she’s gone. Minnie is nowhere to be seen. My heart starts crawling into my throat. She’ll be back, I tell myself. Quit worrying. She knows the way.

We’re back in the woods now, off the path, following a faint animal trail deep in the trees along an edge where pines and hardwoods meet. Minnie runs through the middle of every mud puddle with her nose an inch underwater. I have no idea why. She stops to chomp on a stob of pine. Maybe it smells like pizza? She rolls around in old, mossy bones. She points out all the poop — coyote scat, beaver scat, deer poop, turkey poop. She’s very helpful that way. That’s one of the benefits of following a dog in the woods. They find treasures you’d walk past a million times.

A few months ago, my daughter, Markie, and I drove to the farm for a midweek hike. It was a gorgeous afternoon, a sunny day, which set our quiet demeanor in stark relief. The next day, Markie would be leaving to study abroad for four months in Spain, and we both felt the weight of the waning hours together. Minnie, of course, was unencumbered by such emotions, and she tore up and down the farm paths like she was being chased by a pack of coyotes. Then, suddenly, she skidded to a stop a hundred feet up the trail. She sniffed, backed up, circled, and sniffed again.

“What you got, girl?” I called. Just then, the thought of a copperhead taking a sunbath crossed my mind. “Minnie, no!” She stepped away, and waited for us by the trail.

It was no serpent. It was the complete shell of a box turtle, empty, but still bearing all of its gorgeous chocolate-olive scutes, slashed with yellow markings. We bent down to look more closely. It was completely camouflaged, the yellow stripes nearly invisible against the sun-dappled leaves and pine needles. Without Minnie, we would have walked right past it.

Markie grabbed Minnie’s black ears and gave them a playful scrunch. “Thanks, Minnie, what a cool find!”

I picked up the shell, and told Markie that with a good coat of lacquer, she could take it to Europe as a touchstone of her home ground in North Carolina. “Like your spirit animal,” I said.

She thought about that for a few moments, then decided she’d rather keep it at the house.

“It might fall apart in Spain,” she replied. “Can you preserve it somehow, and keep it for me? That way I can pick it up when I get home.”

Markie’s a smart young woman, intuitive and empathetic, and she’s accustomed to the waves of melodrama that can wash over her daddy. But she has no frame of reference like mine. She was no parent about to say goodbye to a daughter. In that instant, the turtle shell became a covenant, a guarantor that something set free would find its way back. It was a gift, a totem of my child’s promise to return home.

I turned away for a moment to hide glistening eyes, and slipped the shell into a vest pocket. I looked into the woods to find Minnie, to give her a blessing of thanks, as well. But she was off again, unseen. Drinking mud and rolling in otter snot, most likely. Like Markie, she was intoxicated with newfound freedom.