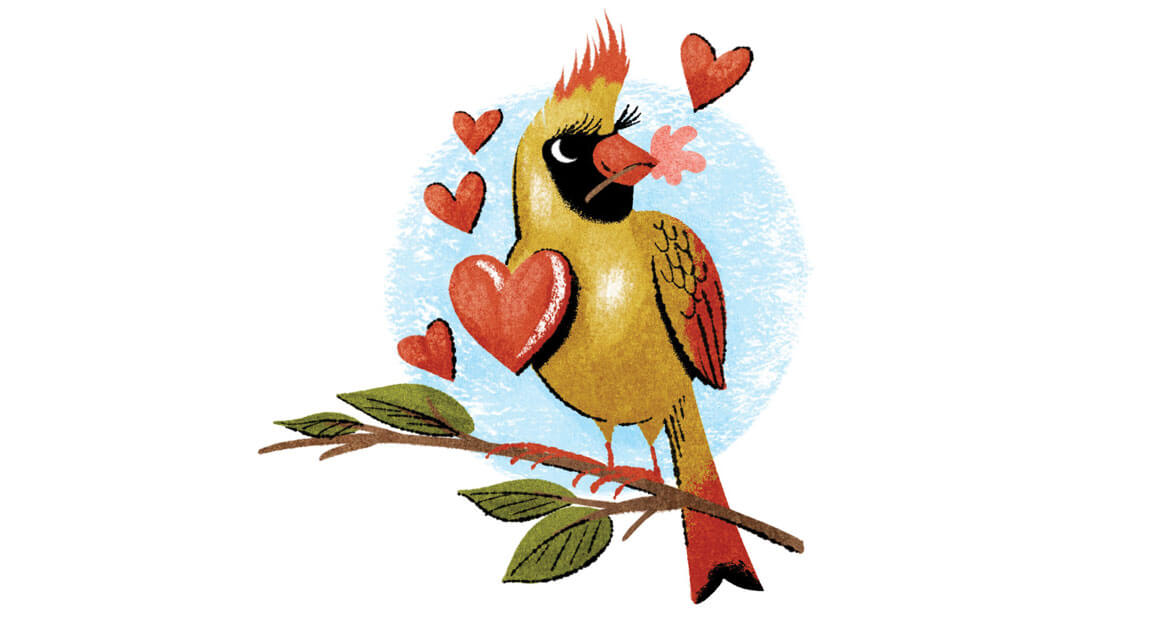 It’s a short jaunt. All I have to do is make it out the front door, across the porch, and then perhaps eight long steps down the walkway to where the newspaper is typically tossed into the monkey grass. But at times, it seems like it’s one of the most dangerous journeys I’ll make all year. And this is one of those times. Because the birds are back.

Across the street, in a neighbor’s redbud, woodpeckers spar like Olympic fencers, chasing each other back and forth from the neighbor’s yard to mine. Towhees dive-bomb my poor dog if she gets too close to a pair skulking in the foundation shrubbery, scoping out some rental property. A bright red cardinal brings a seed to a female redbird perched on a limb and twitches its head back and forth, showing off the prize. And mockingbirds are the worst. The males and females will face off on the lawn under the maple tree. With tails erect and bills pointed to the sky, they’ll charge and feint like tiny medieval knights — and don’t you dare get in the midst of their jousting. Afterward, for some reason, one will perch on the side-view mirror of my wife’s car, practically daring her to try to get to work.

The birds are back, and they’re sick with love. These antics are known as “courtship rituals,” and they help females seek the best mates and strengthen the bond between tiny birds that will soon run themselves ragged trying to ferry worms, grubs, and other goodies to demanding chicks.

There’s a lot of unbridled passion going on, and my front yard seems to be ground zero for most of the ornithological horseplay. 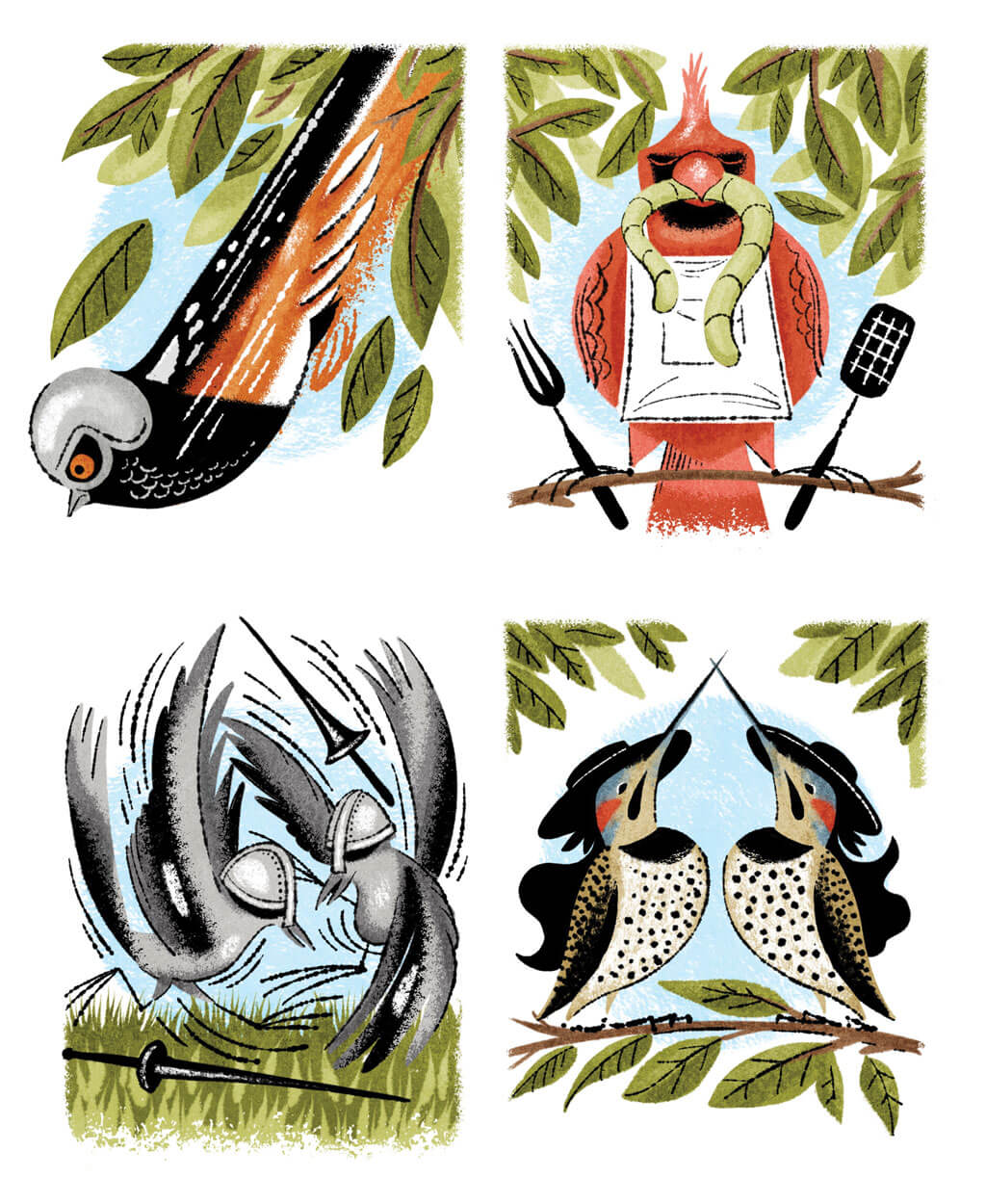 Don’t take this the wrong way. I’m a big fan of birds. The incredible numbers and diversity of birds that make their way to practically every corner of North Carolina in the spring is amazing. And the richness reaches even the tamest backyards and city streets. One late April morning, I was walking along the Black Creek Greenway in Cary — hardly an untouched rainforest environment — while the woods absolutely teemed with birds. Summer and scarlet tanagers thronged the canopy overhead. Gorging on caterpillars, the brilliant red migrants were joined by mixed flocks of orchard orioles, cedar waxwings, black-throated blue warblers, and northern parulas. Birds were all over the place — warblers sparring for nesting space, flycatchers chattering as if boasting about their latest aerial feat. And all this despite an urban percussion section. A car door slammed shut, cutting off a blue grosbeak in husky mid-carol. Air conditioner compressors droned over the cheery whistle of a Louisiana waterthrush.

They ain’t just whistling Dixie. All that singing, dancing, and jitterbugging in the tree branches over the sidewalk isn’t some avian ode to joy. It’s a high-stakes round of auditions, meet-ups, and blind dates. It’s more like the goings-on under the high school football bleachers than a BBC nature documentary. There’s more stress on these poor birds than the height of prom season. 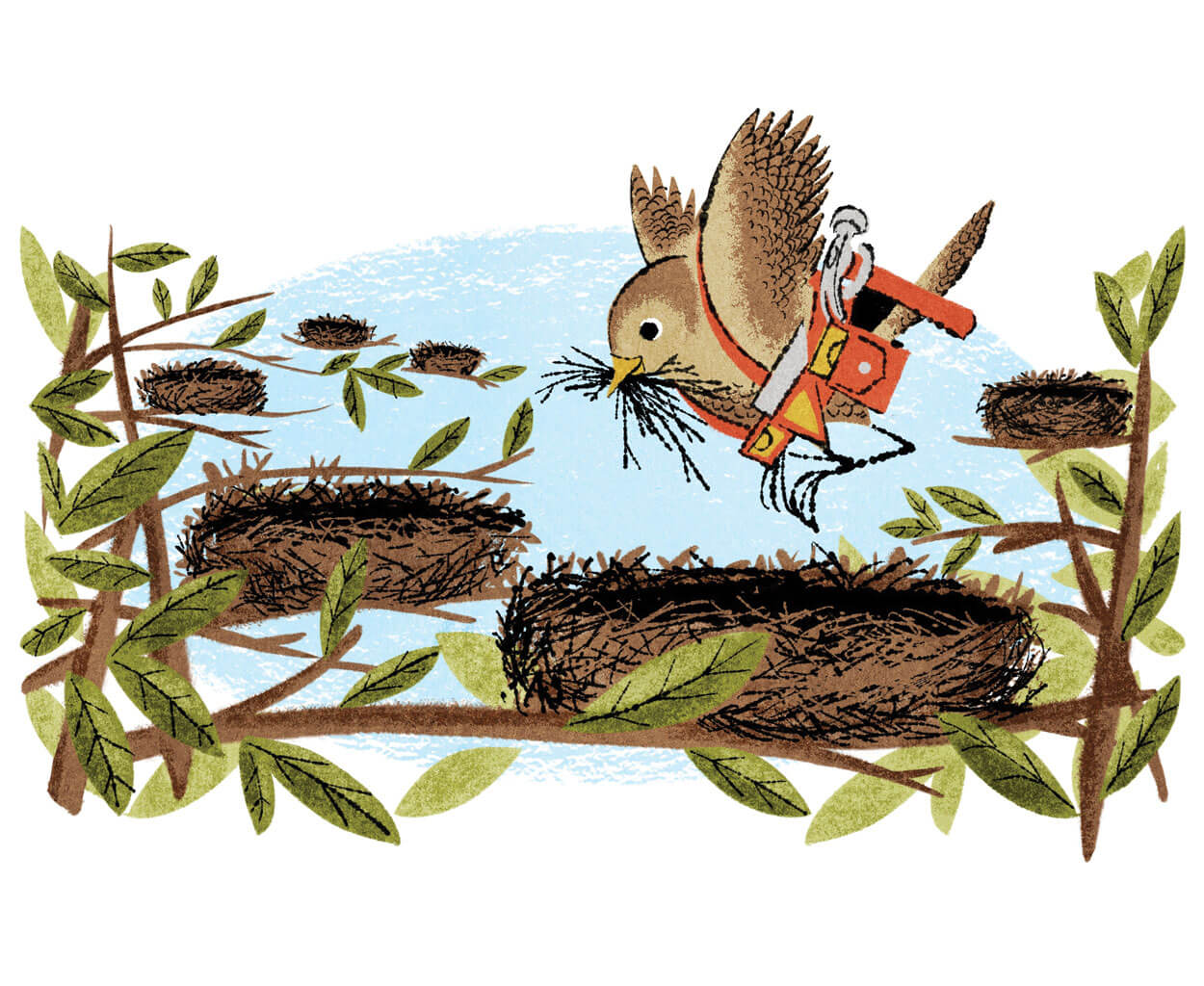 For starters, let’s pity the poor house wren, one of the most common backyard birds. A pair shows up at my front door — literally — every spring. And the courtship shenanigans these birds go through would embarrass fans of the most outrageous dating shows. To woo a mate, a male house wren will build multiple nests. Most years, there’s half a ragtag house wren nest atop the downspout by my driveway, another ramshackle shack in the boxwood on the far house corner, and a fully finished-and-furnished wren crib in one of the hanging ferns by the mailbox. You can watch the little guy burning himself out trying to manage all the construction. I’ll toss bits of string and shredded paper out the front door to help him along. And this is going on up and down the street. Once a female deems a house worthy, she’ll mate with the builder and live happily ever after. At least for a few months — until the kids are gone and she takes off for Mexico.

All that singing isn’t some avian ode to joy. It’s a high-stakes round of auditions and blind dates.

But the house wren pales in comparison to another backyard bird. Male northern flickers duke it out like they’re in a Pay-Per-View championship fight. Two birds will face off on the tulip poplar branch, chests puffed out for the hot female watching from the neighbor’s redbud. The fighters arch their necks and draw Zorro-like figure eights in the air, over and over again, all the while keening out a loud wicka-wicka-wicka call. Over and over again. If such a flicker flamenco dance doesn’t win over the wife-in-waiting, they’ll flit up to the gutter over the kitchen window and bang their heads against the metal a few hundred times. Because nothing will turn a young girl’s head quicker than beating out a lovelorn riff. This is why so many middle schoolers take up the drums.

At the risk of sounding like a prude, let me say that I’m not the only one upset about all of this activity. A Lutheran pastor in 1559 begged Dresden officials to help exterminate the city’s sparrows, citing their “scandalous acts of unchastity” committed during church services. Right there in front of the children’s choir, I bet!

OK, maybe that does make me sound like a prude. Because all that dancing and prancing and springtime wooing is serious business, and it takes a toll on a two-ounce bird. To be honest, I try to keep my distance and let the birds do what birds in the spring will do. Disrupt the courtship rites, and birds might abandon their pursuit, or skulk off and choose a less desirable mate. Which isn’t in anyone’s best interest.

So I swing open the door and make a dash for the newspaper. Mockingbirds shriek in mock despair as I interrupt their slow dance. I catch a glimpse of a couple of robins, cavorting in the driveway in the dark gloom under the truck. They sneak behind the back tire, busted. I wasn’t born yesterday. I know what they’re up to. Love is in the air — and it’s coming to a front yard near you.