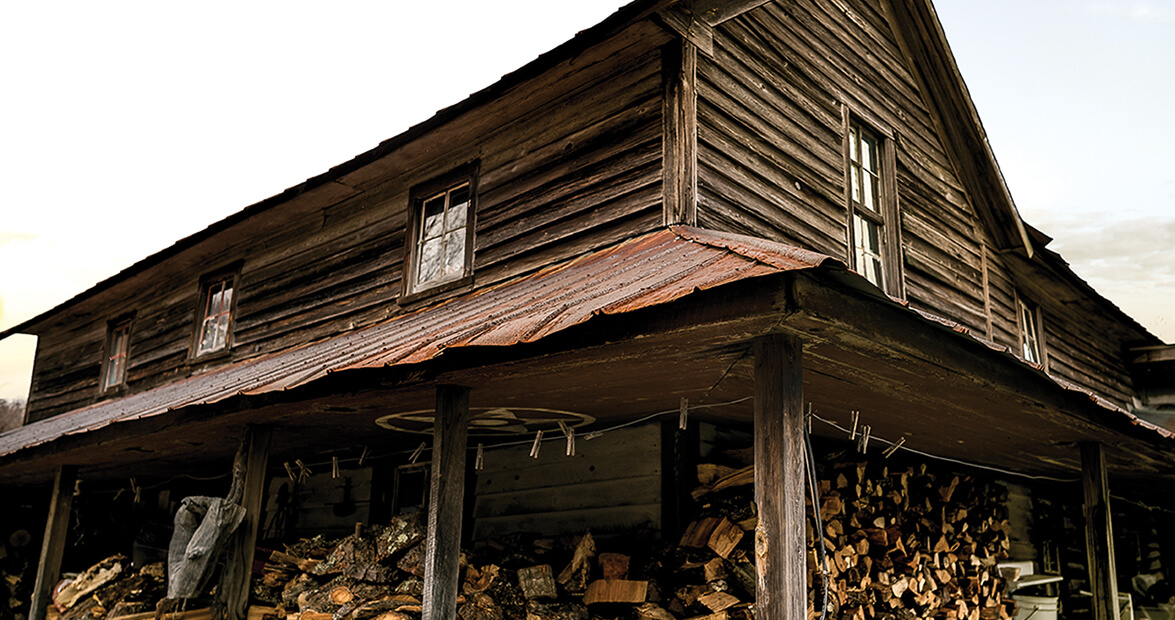 It was raining back then, too, a hard gray rain that turned to sleet after the sun went down. By then we’d already eaten supper — biscuits with chicken gravy, hominy, snap beans, jam made with huckleberries from the fields outside the window — and I could hear the ice pellets patter the tin roof. I could hear the oak logs in the woodstove crackle and the wood floor creak and the old walls groan with a howling March wind as I listened to Ray Hicks tell the old stories. I knew even back then that I was in the presence of magic. Ray, a 6-foot-7-inch-tall bean pole of a man, painted stories about a young boy named Jack, and witches and giants and talking foxes, and a world that seemed to have just slipped over the mountains. That scene — the old battered woodstove, the musty upholstered chairs, the cabin moaning in the dark mountain holler — has never left me.

That was March of 1989, when I was a young magazine writer on an assignment that would prove to be one of the most formative in my career. In the 27 years since, I’ve interviewed 1,000 people, in camps and cabins from Central America to the Arctic Sea. But the two weekends I spent on the back side of Beech Mountain, with Hicks and his wife, Rosa, and their son Ted, honed my own understanding of how to tell a story — how to work memory and imagination like clay and shape a world made of little more than words. The story I wrote, a 4,000-word, eight-page magazine profile of Hicks, was perhaps the first time that I realized that I might have a little fragment of something in common with the finest storyteller in America.

Born in the two-story, frame cabin where he lived his entire life, Ray Hicks was long considered to be the patriarch of storytelling in America. He was a 1983 National Heritage Fellowship award winner with a seventh-grade education and an international following. Growing up in the 1970s, during the heyday of a revival in traditional Southern Appalachian storytelling, I remember Saturday mornings at the High Point Library, listening to the various storytellers on the circuit. I couldn’t get enough of the old Jack Tales, and I read Richard Chase’s seminal collection of the mountain folk stories, Grandfather Tales, time and time again. Ray Hicks could have stepped right out of the book. 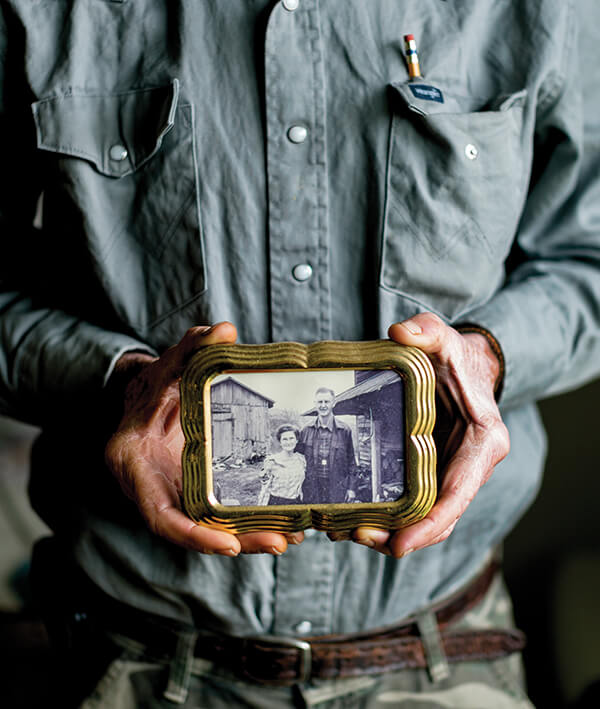 Every picture tells a story, and the photo Leonard Hicks holds tells the story of his parents, Ray and Rosa Hicks, who raised five children in the house Ray’s father built a century ago on Beech Mountain, a house the Hicks’ children still call home. photograph by Charles Harris

I often thought of his old cabin, with the hex signs painted on the porch ceiling to ward off spirits and “haints,” the bundles of sassafras and angelica drying in the kitchen, and the head-high stacks of firewood to ward off winter. Ray died in 2003, and Rosa and Ted passed in 2014. I wondered what became of the house. A quarter-century later, I could still smell the Velvet tobacco of Hicks’s hand-rolled cigarettes, still see him rock back and forth in the cabin gloom, still hear him when he’d look down on me with solemn eyes and say, “You know that once you’re witched from a cat to a mouse can’t nobody do nothing for you.” So I drove to the back side of “the Beech,” as Ray Hicks called the mountain that rose behind his house. Back to Hicks’s roots, to see what was left of mine.

“We five kids kindly sacrificed a part of dad because he give hisself so much to his stories and to his followers.”

Ray’s cabin is tucked into a holler off a dirt road that hugs the back side of Beech Mountain like a crooked stream, high above Valle Crucis, in a little piece of overlooked North Carolina that you hope still exists these days but can’t imagine how it could. Ray’s oldest child, Leonard, spends weekdays in the cabin, while one of Ray’s three daughters typically comes in on the weekends. I spoke to Leonard a couple of times on the phone to line up my visit. In years past, he told me, a steady stream of folk historians, artists, and fans found their way to Ray’s cabin. After Ray died, Rosa and Ted remained at the homeplace until failing health forced a move to nursing centers. Soon, the stream of visitors turned to a trickle, and since their passing, it’s mostly dried up. It had been two months since anyone visited the cabin, Leonard said. He’s standing on the front porch watching for me when I roll up.

I would have known Leonard Hicks was Ray Hicks’s boy if I bumped into him at the grocery store. He has the same angular face, the same crow’s-feet. He walks like Ray, with a shuffling, articulated gait, and he talks like Ray, with the Elizabethan-inflected dialect brought over by Scotch-Irish and English settlers, the words running up and down the musical staff. And for Leonard, like Ray, talking is an all-body activity, his arms and eyebrows in constant motion, his head bobbing back and forth.

I pull out a sheaf of notes and old photos from my time with Ray, and a copy of the magazine article I wrote. Leonard leafs through the pile, stopping at a full-page photo of his dad in front of the cabin, one hand on his cane and the other held out with pinched fingers.

Ray wears the boonie hat in every one of the photos, its brim shading that wide, anvil-shaped forehead.

He’s quiet for a rare moment, and I can hear him breathing, deep and labored. He taps on the picture and brightens up. “Look there at his fingers,” he says. “I can hear him now. He’s a-sayin, ‘Jes’ a li’l bit,’ and shows it with fingers, jes’ like he done in so many of them stories.” 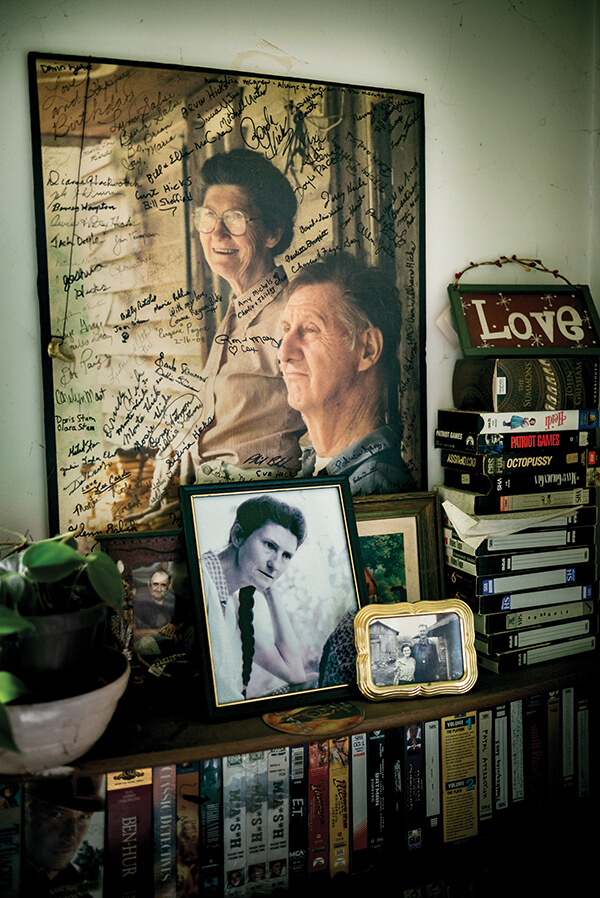 Leonard Hicks bears a striking resemblance to his father, the storyteller Ray Hicks. The home they both grew up in hasn’t changed much since the patriarch died in 2003, right down to the VHS tapes on the shelves. photograph by Charles Harris

Though Ray Hicks achieved a rare status of fame for a storyteller — he was featured on public television and newscasts, and was the subject of a New Yorker magazine profile and a book or two — he rarely traveled beyond a few local schools and the annual National Storytelling Festival in Jonesborough, Tennessee. When I visited, he was hobbled up with gout, but he could still talk through breakfast, lunch, and supper. On my first visit to the cabin, he told stories and talked nonstop for seven straight hours about growing up on the Beech. When the sleet started piling up on the windowsills and I tried to take my leave, he put a gigantic hand on my arm and said, “You can’t leave just yet. You’ve heard me talk, but you ain’t yet heard me play.” Even today, on gloomy days, I still find myself humming and singing a verse from the ancient ballad I heard only once, decades ago:

After the deaths of his parents and brother, Leonard spent a lot of time alone in Ray’s cabin. He still does. For a while, he would hear Ray and Rosa and Ted. Call them ghosts or spirits or haints, whatever you like. They were there — he was sure of it — but just for a while.

“Ted was against this new addition to the cabin, so I never heared him in here,” Leonard says. “But for a while, I could feel his presence in the old part of the house.” After Rosa died, two weeks later, Leonard could hear her in her beloved kitchen. “I’d hear them pans rattling on the woodstove and the oven openin’ up,” he says. “I knew that was Mom. She stayed around, but I knew she had somewhere better to go. Dad was waiting on her. I ain’t heared nobody now for a long, long time.” 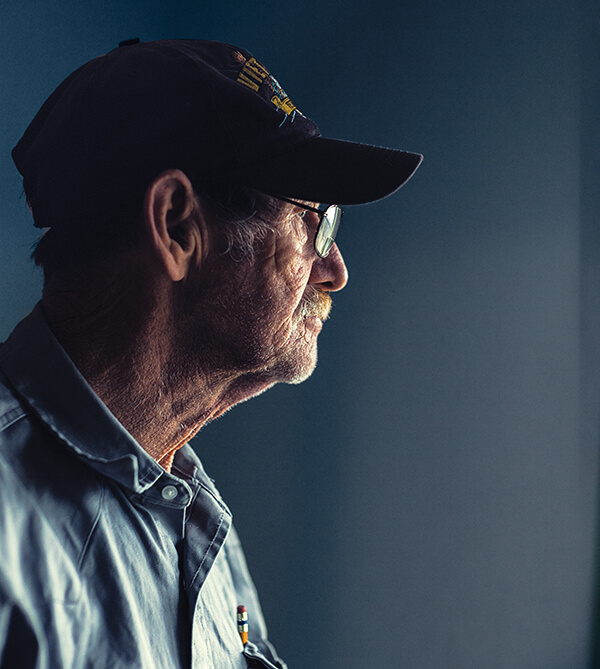 It’s just Leonard now, and his two dogs, and a sister here and again in the old Hicks cabin. His plan is to keep the little farm in the family, but how that might transpire he can’t tell me. “But I fit like crazy to hold it,” he says, “and I’m going to hold it till the breath goes out of me. That’s why I’m here. You take life out of an old house, and it’ll go down quick.”

I never intended to stay as long as I have. It’s hard to leave. Somehow, this little sliver of my past remains remarkably unchanged. Still, I can’t ignore its precarious position. On those first visits with Ray, the homeplace had seemed to exist as a part of the landscape, as organic as a storm-stunted oak, part and parcel with the mountain itself. Now it clings to the slope like a curl of old paint. I dread saying goodbye. When I wonder aloud where Ray was buried, Leonard perked up. “Why, right up the road,” he says. “Let me take you to him.”

The rain slackens and we wander up the dirt driveway, Leonard pointing out the dried winter husks of phlox and lupine that still sprout in Rosa’s flower garden. His two beagles, Jack and Ray, lead the way. Maybe 50 yards past the cabin, the family cemetery takes up a quarter-acre of cleared ground on the uphill side of the road, but there are only a handful of headstones. Ray lies within arm’s reach of his wife and his mother, beneath a marker engraved with a little log cabin in the woods. The ground still bulges beneath the headstone. Plastic red flowers sprout through a coverlet of dead leaves.

“We five kids kindly sacrificed a part of dad because he give hisself so much to his stories and to his followers,” Leonard says, unprompted, as we stand over the graves. “But I understand now why he done all that. It was more better for him to pass them things along. And how in the devil he kept all that in his head, well, I just think the Lord put him here to tell stories.”

As we walk back to the cabin, Leonard stops. He points toward Beaverdam Ridge, then toward Rich Mountain over near Boone, and Stone Mountain, where a witch witched Ray with the gift of storytelling. Behind us rises the great bulk of the Beech. I can’t see a thing. The fog’s too thick, the clouds too low. But standing there with Leonard, I can feel the mountains pressing in, all around, with their promise of things eternal.