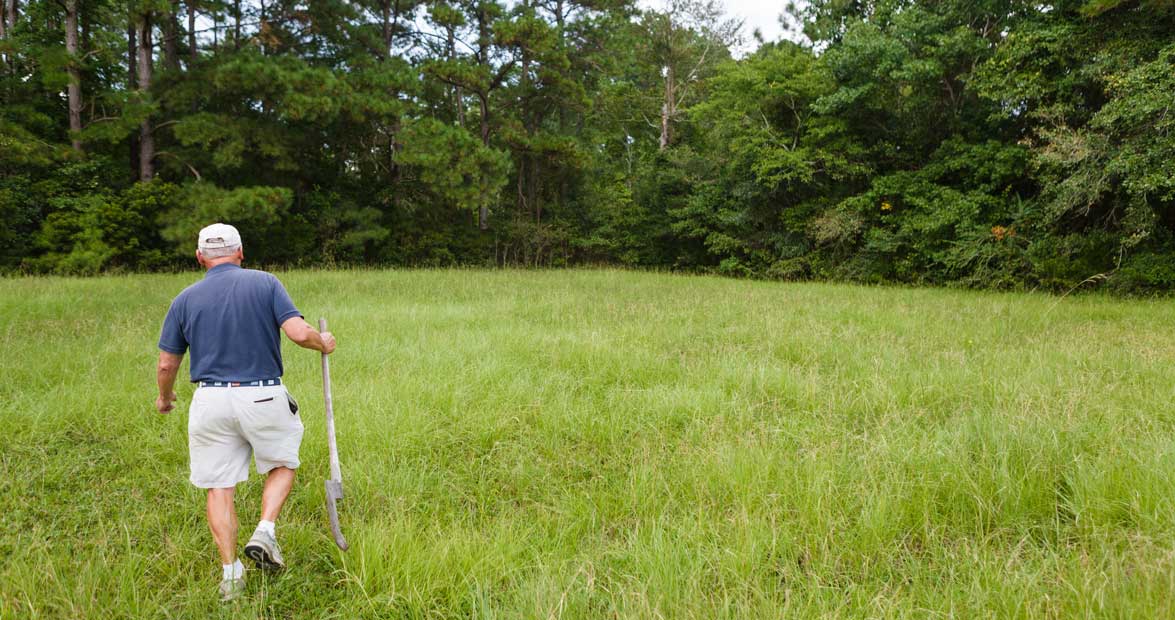 They built the churches on the highest ground they could find, and finding a high knoll was no mean feat in the flat country of Carteret County. A little knob of tall pines, open enough to catch a breeze, close to a marsh creek so they could sail or pole or paddle a boat to church. That’s what they looked for. And that’s where we are.

Denard Harris pulls a bush ax from the bed of his pickup truck and hands me a machete. “We’ll need these,” he says with a grin that turns the 76-year-old marina owner from Morehead City into a kid again. “This is real history. Come on.”

We walk along the edge of a cornfield, south of the Neuse River, north of the Newport. Harris inspects a dark curtain of woods. He turns to tunnel through a grove of myrtle and bay, pine and holly. He chops at greenbrier. What we’re looking for isn’t marked on many maps, and those maps that mark it were made by Harris himself. We’re close. He knows it. He looks through the woods, studies the pines. “A little farther,” he says. “Watch the briars.”

It takes some doing to get to the spot where the Clubfoot Creek Quaker Church once stood. This canal leads to a footbridge that leads to a field … or is it the other way around? photograph by Baxter Miller

History has its academics and teachers, its writers and thinkers. And then there are people like Harris: the caretakers. The people who carry the old stories like the ancients carried embers for the next fire. These are the ones who won’t let history die.

A few hundred feet into the woods, Harris finds what we’re looking for: soaring old pines in a straight line, growing from a six-foot-tall ridge that crosses a stream. It looks out of place. Unnatural. “That’s it,” Harris says, leaning on the bush ax, quiet and still for the first time all day. Worshipers built the ridge — an earthen bridge — by hand, shovelful by shovelful, so that folks from the far side of the creek could more easily walk to church. To the Clubfoot Creek Quaker Church, to be specific, which stood on this very site, this very knoll, 250 years ago. 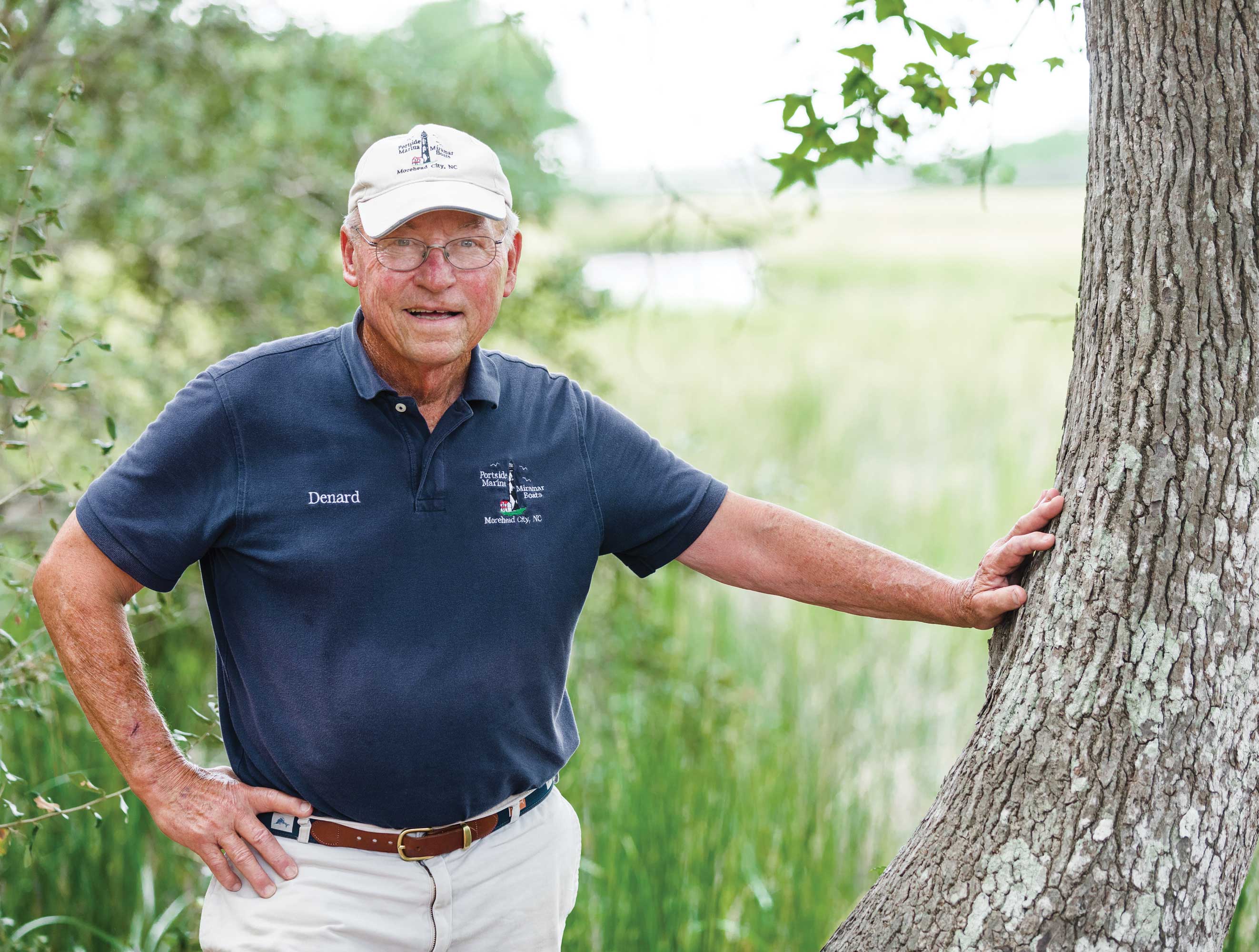 Harris’s great-great-grandparents were members of this church, and he was raised on the family farm nearby with a keen sense of the region’s Quaker roots. He was also raised plowing behind mules, cutting pines, and shrimping. As his high school graduation approached, Harris told his father that he wanted to continue in the family businesses. His dad told him to dream a different dream. Harris ultimately earned three degrees, including a doctorate in finance and administration. He spent much of his career in South Carolina, as an economist for engineering and construction firms, and wound up working in the governor’s office of public education. He came home some 20 years ago and bought Portside Marina, hard by the state port in Morehead City. One minute, he’s overseeing 80-foot yachts reprovisioning after a trans-Atlantic crossing. The next, he’s running a forklift, lifting pleasure craft in and out of Bogue Sound. But he pours just as much vim and vigor into tracking down his family’s deep roots in Carteret County’s least-known corners.

The first Core Sound Quakers, he tells me, made their way here in the first quarter of the 18th century. Some came overland. Others came by schooner from as far away as Rhode Island. “They had a tremendous cultural influence on this area,” Harris says. “Prior to the Quakers, [residents of Carteret County] were hunters and gatherers and whalers. But [the Quakers] brought woodworking skills and shipbuilding and sawmills.” One Quaker immigrant settled on more than 1,000 acres of longleaf pine and named the river nearby for his Rhode Island home: Newport. In 1736, the Quakers built a church, the Core Sound Meeting House, a few miles from Beaufort on what is now NC Highway 101. In the years that followed, seven subordinate meeting houses were built, some as far away as Lake Mattamuskeet. The Harris family church was one of those, built on this knoll, in a grove, along the small branch that feeds the larger Clubfoot Creek just a few hundred feet away.

We pick through the woods while Harris tells me about the Quaker sawmills and shipyards nearby, and how there must be a small cemetery close to the church, but it was so old that the grave markers were likely ballast stones from sailing ships, and in later years they might have been carted off for building foundations and fences. But his eyes are constantly drawn to that dark mound of earth, the old land bridge that leads, these days, to nothing in particular. Or so it seems. 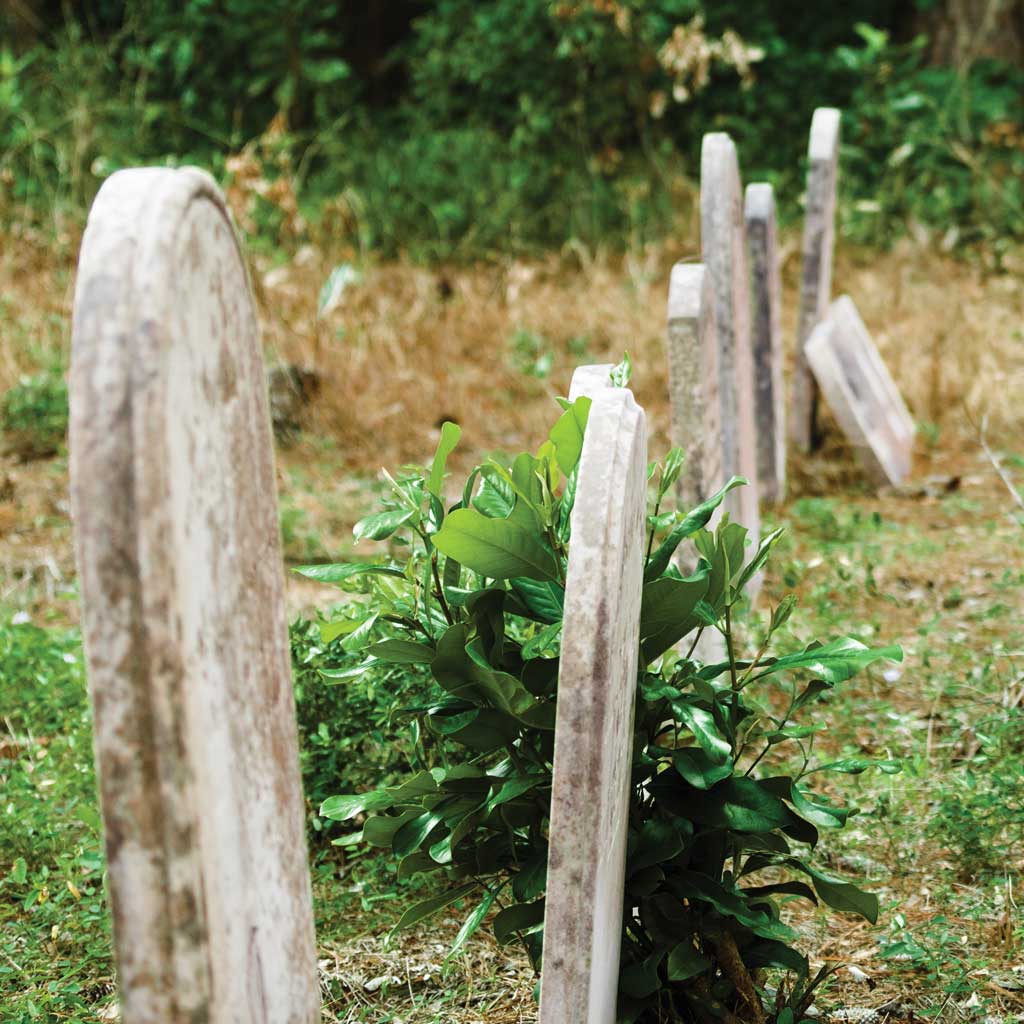 Quakers headed to the Meeting House would’ve piloted skiffs through the marsh behind Harris. Below, along NC Highway 101 near Harlowe, a cemetery for Core Sound Meeting members sits near a historical highway marker. photograph by Baxter Miller

“They would come from all over,” he muses. “They would come to church and stay all day.” But the Quakers didn’t stay long in this part of North Carolina. By the 1840s, most had changed denominations or left the region, moving west, away from slave-holding states. The Core Sound Meeting disbanded in 1841, and the old meeting houses were ceded to other churches or collapsed, engulfed in forest and field. Who knows how many years it has been since anyone has wandered these woods, wondering about that long mound of dirt in the pines, what it was that led people to build a causeway in the middle of nowhere.

We head back to the truck, stepping out of the woods and into the glare of sunlight. All is quiet save for the crickets in the field and Harris humming to himself, comforted by the knowledge that he’s done right by his people. He’s told the stories of William Harris and Rebecca Garner Harris and all their children and their children to someone who might share it even further, and let folks know about a little place in the woods, up high in the pines, overlooking the creek, where a man won’t let a few centuries of big woods and briars swallow up the past.