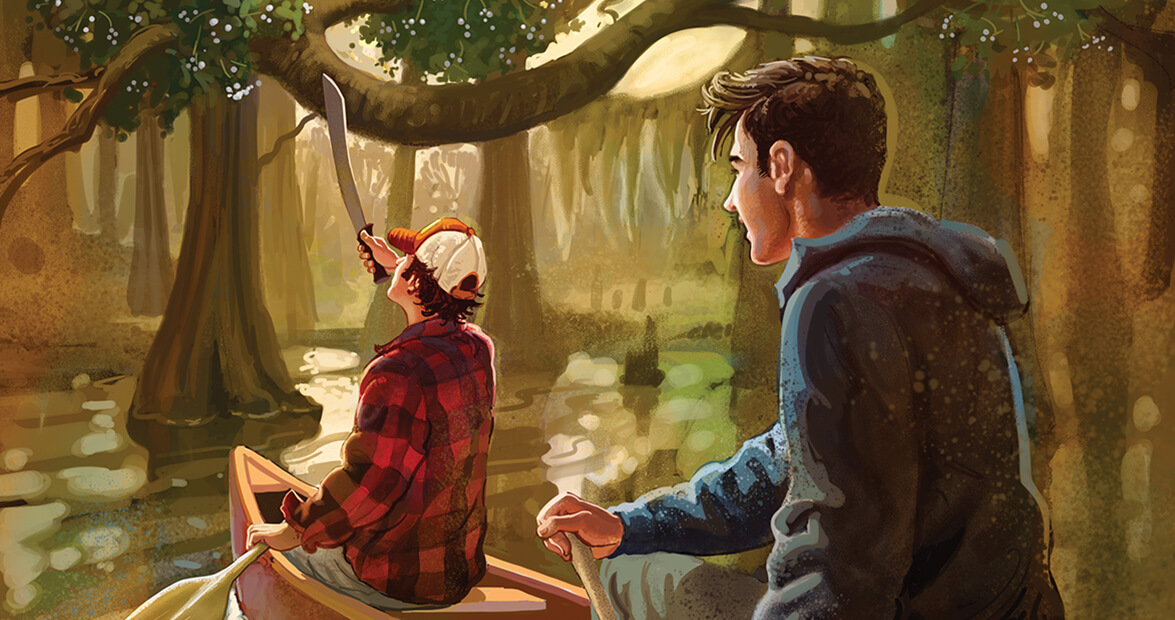 I don’t remember who came up with the idea. My pal Lee Davis and I were still in college, so, of course, brilliant ideas were a dime a dozen. But this one was a special jewel. It involved canoes, machetes, sorority girls, and big money. And, for a change, this was a big idea we could actually pull off.

We’d been duck hunting in a huge swamp in Johnston County, paddling my canoe deep into the flooded woods where stunted trees grew low and gnarly. With the trees winter-bare, giant broccoli-shaped heads of mistletoe were silhouetted in nearly every tree, for as far as we could see. I’d never seen so much of the plant. And it grew low in the trees, close to the water. With the canoe, we could grab the stuff by the handful. It didn’t take us long to realize the obvious: Money was growing on trees.

Down South, shooting mistletoe from the treetops is an old tradition. With the Christmas party season approaching, it’s common for folks to take to the woods to shoot down a few sprigs. But harvesting mistletoe with a rifle or shotgun is a low-yield proposition. A shotgun blast results in a bunch of little twiglets raining down, half of them shot full of holes, which is really no problem when you just need enough for a kiss or two. A .22 rimfire rifle is a more surgical tool, but it takes a lot of bullets to bring down a decent bundle of mistletoe.

But that was no issue in our duck swamp. We could paddle up to a swamp-stunted tree and hack off mistletoe with a machete. There was nothing to it. No ragged leaves or bullet holes to cut into our profit margin. We could fill the canoe in an hour and run truckloads of the stuff back to Chapel Hill. We were going to drown in cash.

Within days, the pieces fell into place. Our friend Noel worked at a Chapel Hill flower shop. She’d be able to sell a few sprigs. I worked at Sutton’s Drug Store and knew a ton of Franklin Street merchants. We worked out a business plan over a beer and a couple chaws of Red Man. It was time to harvest the crop.

Mistletoe, as most everyone knows, is a parasitic plant. Or, more accurately, a hemiparasitic plant: Although it attaches to its host tree through a rootlike growth called a haustorium, extracting water and nutrients from the tree, its leaves are green and contain enough chlorophyll for limited photosynthesis. Maybe that — plus the fact that it could bloom year-round — is why ancient Druids considered mistletoe a cure-all and believed it helped with fertility. They even hung branches of the plant in their homes to ward off evil spirits.

And nothing blunts an evil spirit like a little holiday smooching. By the early 19th century, mistletoe had made its way to the doorways and plaster ceilings of Victorian homes during Christmastime, much to the “imminent peril,” joked Washington Irving, “of all the pretty housemaids.” In The Pickwick Papers, Charles Dickens describes an over-the-top London Christmas Eve party, complete with every classic Yuletide icon imaginable — from wassail to mincemeat pie — that unfolds under a giant sprig of what Dickens calls “the mystic branch.”

These days, though, the ritual of harvesting and hanging mistletoe can get a bit fraught. A few years back, a Georgia man was busted for shooting mistletoe out of a tree near a shopping center in an Atlanta suburb and was hauled off to the pokey for a night. Poor fellow was just trying to help his fellow man pucker up for the season.

Which is what made our swamp in Johnston County such a find. Ducks and turtles were the only witnesses to the harvest. We filled the canoe twice without firing a shot and hauled our loot home in my old pickup truck, howling like gangsters who’d just knocked over a bank.

Over the next week and a half, Lee and I shopped around that mistletoe like backwoods peddlers. We loaded my truck with garbage bags of the green stuff and went door-to-door to Christmas tree lots around Chapel Hill. Wentworth & Sloan Jewelers bought a few sprigs, but mostly because my friend Wendy worked there. Noel’s flower shop divvied up a bulk bag into smaller sandwich bags and sold them for $2 a pop. I hawked the mistletoe at the drugstore, where the lunch counter attracted a steady stream of students. And we sold some to a few sorority houses that were decorating for Christmas.

But a double 16-foot canoe load of mistletoe — let me tell you, brother: That’s a pile of smooching. Turned out that Lee and I saturated the market pretty quickly. We stored overstuffed black lawn bags full of mistletoe in the basement of my rental house, nervously watching it wither, and we soon got a lesson in the commodities market. Prices tumbled. At the beginning, we drove a hard bargain: We figured $25 for a garbage bag full of guaranteed lip-locks was a steal. But as the Christmas parties came and went, our remaining stores of mistletoe molded and blackened. Prices drooped like an unwanted Christmas tree.

I think we made a couple hundred dollars each, all told, which was not bad for a pair of college kids in the 1980s. When December rolled around the next year, however, we figured there had to be an easier way to make a buck. But 33 years later, we’re still thinking. Hawking mistletoe was a brilliant idea and our last workable get-rich-quick scheme — even if we didn’t actually get rich. Still, for a few weeks one December, thanks to Lee and me and a canoe full of mistletoe, you really could buy love — or at least a kiss on the cheek.