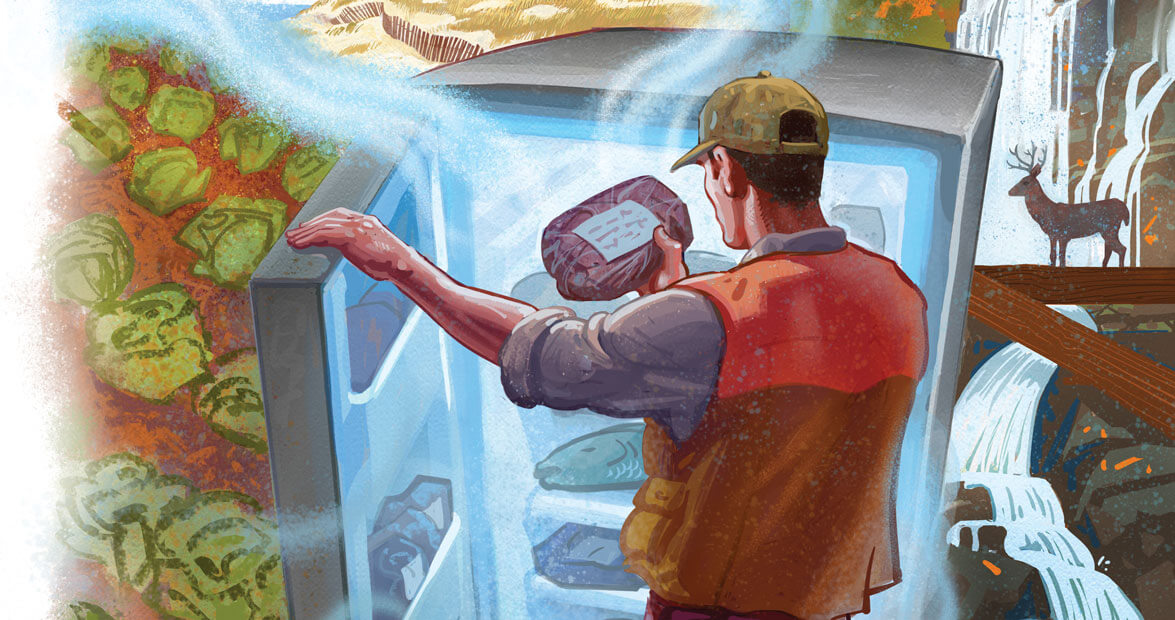 I keep the freezer door closed tight with a strip of duct tape. If I’m not careful, a piece of cat food from the bag stored on top will slip into the rubber gasket around the door, and the freezer will frost up so heavily that the inside will look like the back deck in a snow, humps and bumps that meagerly suggest what lies beneath. That’s the downside to a basement freezer. It’s out of sight, so we pile the top with spare coolers, laundry detergent, old shoes, and the cat food bag. It’s a catchall, a miniature version of a mudroom.

Sometimes, when I open the basement freezer, I know exactly what I want: frozen collards from my mom’s friend’s farm down near Whiteville, perhaps, or Core Sound shrimp frozen in dinner-size blocks. Each September, a buddy brings several hundred pounds to the deer camp, and we split it up on a hot afternoon, hands numb in the meltwater. The freezer is also where I keep a stash of my mom’s cookie brittle hidden from the rest of the family. A lot of times, though, I have no idea what I’m going to pull out of there.

One reason for that is that the freezer stays jam-packed year-round. I hunt and fish widely, and am a shameless beggar of my friends’ garden-grown produce, so there’s rarely a lack of choice when I crack open that upright 13.8-cubic-foot Kenmore treasure chest.

Another reason why I sometimes rummage through the freezer without a clue as to what I’m looking for is that I’ve learned to open it with an open mind. Each vacuum-packed bag or plastic container envelops a moment in my time on this earth, a place where I traveled, or perhaps a gift from a friend. Distant memories can be brought to mind with the slightest taste. For me, my basement freezer holds the winter winds that blow through Halifax County swamp woods, and sunrises over Cape Fear marshes, and the smell of fresh-turned earth. I open the freezer, flick cat food nuggets off the top shelf, and let the journey begin.

The French novelist Marcel Proust wrote of this. In Remembrance of Things Past, his narrator recalled a visit to his childhood home, during which his mother brought him a small cake treat called a madeleine, which he dipped into warm tea. Immediately, the narrator is struck with a visceral revelation.

“No sooner had the warm liquid mixed with the crumbs touched my palate than a shudder ran through me and I stopped,” he says, “intent upon the extraordinary thing that was happening to me.” Years have passed since Proust’s narrator ate a madeleine, but the taste immediately recalls the image of a beloved aunt whom he would visit on Sunday mornings, and she would give him the small scallop-shaped cake. Immediately, her small gray house “rose up like the scenery of a theatre” in his mind, and “in that moment all the flowers in our garden and in M. Swann’s park, and the water-lilies on the Vivonne and the good folk of the village and their little dwellings and the parish church and the whole of Combray and of its surroundings, taking their proper shapes and growing solid, sprang into being, town and gardens alike, all from my cup of tea.”

I’m with you, Marcel. Happens to me all the time. It’s no sponge cake, I’ll give you that, but the sight of a frosty, vacuum-packed bag of collard greens sends my mind racing backward, to my grandmother’s kitchen in Goldsboro, a pressure cooker on the stove, a pineapple upside-down cake on the counter.

On the top shelf, there’s a bag of doves from the Stillwater Hunt Club in Halifax County. Fathers and sons ringed the field on that September afternoon, sweat running into their eyes, piling up memories that will one distant day come flooding back when they hold their own grandchildren, when they hold their own sons’ hands in their final days on this earth.

There is wahoo from the Gulf Stream — I send it to my daughter, Markie, in school in Boone, a little piece of the ocean she can taste along the Blue Ridge. There are mallards and wood ducks from the creek behind my farmer pal Robert’s house, and I can see my son, Jack, in the front of the canoe, breath like smoke, still as stone, as the ducks dabble along the ice that sheathes the creek bank. What’s that? A glint of foil? Could it be? Yes! An Angus Barn chocolate chess pie, forgotten since last Easter, jammed like a slab of sea ice into the freezer’s back corner.

I’m pretty careful to mark each package with what’s inside, and where it came from, and the date it came into my possession. Those pheasants are from South Dakota; that wild pig is from the Lowcountry marshes. But some of the parcels are a little cryptic. I pull out a quart-size baggie, its label a smear of indecipherable Sharpie ink. You got me on this one. No idea. I scrape away the frost like ice from a windshield, and peer through the plastic. Hmm. Could be okra. Might be peppers. Definitely not Brunswick stew.

But most of the time, I can pull out a parcel — that one there, say, marked “Q20 George Hi 2/17” — and know instantly that those are 20 bobwhite quail from my hunt at George Hi Plantation, in the tall pines outside Garland. George Dixon and I would push through waist-high Indian grass ribboned with partridge pea and watch the bird dog, Jake, part the savanna like a schooner at sea, seining the air for the hint of a quail. Later, after the hunt, we would put our sock feet up against the lodge’s large fireplace and walk through the fields one more time in the retelling of the day’s hunt. With that cold, frozen package in my hands, I can feel the sun on my face and the catch of briars against my pants as we chase a bird dog chasing birds through the plantation’s restored prairies.

That’s a lot to glean from a pack of frozen meat. But had you been there, under the pines, in the little bluestem, a good friend at your shoulder, closing in on Jake, you’d understand. Had you been there, you could just about taste it.