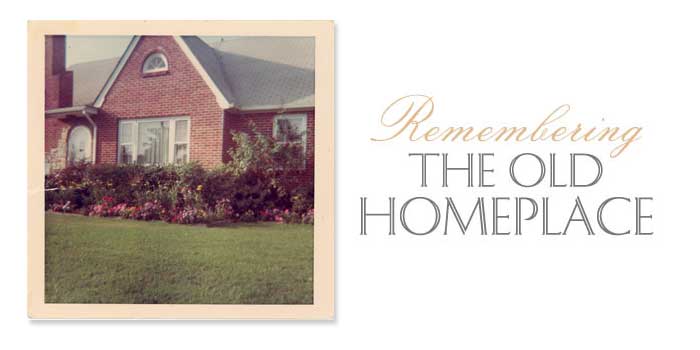 My grandmother once staged a brief campaign to call her home just off N.C. Highway 210 in Angier “Maple Hill.” An English teacher and librarian, perhaps she wanted it to have the gravitas of Wuthering Heights or Tara. The tidy brick and stone cottage, built from mail-order plans, must have been too modest for such affectation, for the name never took.

A widow since her early 40s, she lived there until nearly the end of her life, just past the point of wisdom or safety, but her hold on the place was tenacious. Built by her husband and father, walking distance from her parents’ house and her children’s school, shouting distance from her church, the house held all she cherished in its orbit and within its walls.

There was no hill, but she planted maple trees and photographed their brilliant yellow and orange foliage each fall, so their burgeoning canopies are well documented. She also planted pecan, cherry, apple, and crab apple trees; set up a grape arbor for Concords; and kept a little patch tilled into neat rows for cabbage, collards, tomatoes, squash, turnips, green beans, and potatoes. Of her flowers I recall tulips, daffodils, daisies, peonies, zinnias, gladiolus, and roses, and I’m sure that’s a partial list.

Indoors the industry continued apace, with frequent bouts of canning and jelly making, and the relentless preparation of meals, which seemed to occupy the interim between meals. If she grew exceedingly weary, she might swallow an aspirin tablet or consent to lie down briefly in her bedroom just off the kitchen, where she kept an ear cocked for the oven timer or a daughter or granddaughter mishandling some small chore she’d been assigned.

The term “sweat equity” might have been unfamiliar to her, but she would have fully understood the concept. Having invested her considerable energy and efforts, she felt it her due that the house should be the primary site of Sunday dinners and holiday gatherings in perpetuity.

If my parents chafed at the weekly obligation or wanted a holiday in their own home, they kept it to themselves. We might or might not have attended church on Sunday, but that midmorning drive to Angier was sacrosanct. The midday dinner was my grandmother’s sermon: two roasted meats (one roasted, one fried or stewed was also acceptable), multiple skillets of vegetables simmered to oily deliquescence, and at least one layer cake.

Usually it was my parents, sister, and me attending meals, and one or both aunts while they still lived at home, later accompanied by their boyfriends, then husbands, and finally their children. My aunts were younger than my mother by 10 and 13 years, so they seemed more like big sisters to me, but kind ones that neither teased nor hit (which is to say, not like sisters at all). Neighbors and extended family stopped in after church, so visitors came in a constant stream, and when the Virginia cousins came down, the house was filled to bursting. Yet the leftovers remained plentiful, always enough to cadge ham slices all afternoon and fill the plates again for an early supper. All the food sat out on the stove until reheated for this final meal, and although my mother and aunt, both nurses, sometimes tutted quietly about food safety, no one ever got sick or refused to take home a proffered margarine tub of field peas or mashed potatoes.

Oh, the food. The labor it required, the abundance she prepared — the food showed her love, and it was how she called us home. Let us take a moment to honor the food my grandmother made, mostly simple fare, but it could never be replicated out of the context of her blue-checked kitchen. Squash and onions fried in corn oil to a glistening mush. Long-simmered collards mingled with white cubes of turnip bulb and dressed in hot-pepper vinegar. Butter beans, silver corn, snap beans, all cooked down to creamy heaps in salty broth. Crisp-fried disks of cornmeal. Deviled eggs heaped high with yellow yolk and dusted in paprika. The huge, obligatory turkey baked in observance of Thanksgiving, its bland meat never seeming quite worth the predawn preparation and constant, fretful basting — although the accompanying dressing, enlivened with sausage, was always good. Chicken pastry — a stew made with exacting precision, the flour-and-broth-based noodles rolled so sheer one could read the newspaper through them before boiling. My grandmother’s spice cabinet contained, chiefly: salt, pepper, bay leaves, paprika (for color), cloves, cinnamon, vanilla extract. It was enough.

“Salads” were gelatin based: One incorporated cottage cheese, canned pineapple, and chopped pecans, congealed in a fluted mold and sliced like cake. These dishes were eaten with the meal in keeping with their status as salads; they were not to be mingled with or mistaken for dessert, which included pecan pie if the trees had been generous, chocolate pie if they had not. Thanksgiving and Christmas required a red-velvet cake with cream-cheese icing, but yellow cake with chocolate or — ecstasy! — caramel icing might appear any old Sunday.

The adults often split by gender after eating, the men congregated in the narrow front room around televised football or basketball, while the women drank coffee in the fancy living room with the pink, tufted sofa and the wingback chairs in a shade of sea-foam green that precisely matched the patterned wallpaper, the carpet, and the swooping drapes with brocade and pom-pom trim. We children, stuffed and sluggish, or jazzed by the tins of sugar consumed, were free to wander.

Just across the street, on the other side of N.C. Highway 210, was the graveyard where my grandfather and great-grandparents were buried; their shared headstone had Adams engraved on one side, Barbour on the other. I dimly remembered the Barbours, my great-grandparents. Ila sold Avon, although she wore no makeup; likewise she grew tobacco but did not smoke nor dip. Rellie made my toy chest, a miniature deacon’s bench with a hinged lid for the seat. Their house, just a few short blocks from my grandmother’s, had a player piano and closets crammed with scented creams and novelty aftershave bottles shaped like chess pieces and classic cars.

For a long time after they died, we still stopped by to leave food for their cat beneath the pomegranate tree and pluck the fake-looking fruit, not to eat but to display like wax apples. Their yard became the setting for stories told to me by their children and grandchildren, memories I freely grafted onto my own: Ila invoking Jesus’s aid to repair a stopped-up toilet; Rellie sobbing in gratitude when it was clear his daughter would survive pneumonia. Going there wasn’t sad; it was a way of conjuring them.

On the Adams side of the stone, my grandmother’s name and birthdate had already been etched, just missing the final bit of data. I couldn’t decide if it was sweet or spooky that her husband was buried so close to where she lived, just a two-lane state highway between them, the empty space beside him marked and waiting for her. If I’d been born a boy, I would have been his namesake: Winfield James. I often imagined my alternate life as a boy with such an old-timey name, dressed like a Norman Rockwell painting in tweed knickers and a newsboy cap, drinking buttermilk.

He died of pancreatic cancer at 42: diagnosed and dead within a month. His wake was held at the house, more because the local funeral home was in disrepair at the time than out of adherence to old traditions, and I knew that must have been spooky. My mother still speaks of it with distaste; she was 15 when he died, and having his body, in his coffin, there in the living room for three days was unbearable.

I believed my grandfather watched over us, and I spoke to him as to an imaginary friend, while my sister and I put together makeshift bouquets for him and the Barbours with flowers poached from other graves.

After he died, while my mother and aunts were young, my grandmother developed cataracts and needed surgery, although such surgery was still a hinky prospect at the time. Without it she’d slowly lose her sight, but it was a scary procedure with a long recovery, and it left the eyes without natural lenses. At best she’d be stuck with Coke-bottle glasses, and at worst she’d still go blind, blind like her cousin Howard, but a blind widow with dependent children.

In the midst of this terror and uncertainty, she told me, Winfield came to her in a dream; put his hands over her eyes; and said simply, “Ozella, you’re going to be all right.” So she knew she would be, and she had the surgery, and she was. If her brain created that dream out of sheer desire, I don’t think it’s any less a marvel than Winfield reaching through the veil (or across the highway) separating living from dead and laying hands upon her.

Even in her 80s and 90s, when her bones turned to chalk and she began to fall, to shatter, my grandmother never wanted to leave the vicinity of that comfort, the walls my grandfather built so strong and snug around her, where she survived the worst grief, then marshaled all her energies, grew and made things, and gathered and fed generations.

She hadn’t wanted to go, but there came a point where no amount of help was enough for her to stay. Always sharp, after she was exiled to assisted living, then a nursing home, she grew increasingly confused, out of context, unseated. Perhaps she’d been better able to mask her decline at home, the rooms and their furnishings imprinted in the body’s memory, remaining navigable through instinct.

“When I go back home,” she told my sons, suddenly lucid in their presence, “you’ll come to see me at my house. We’ll bake us some cookies.”

My grandmother’s house kept her tethered to the world and to us. Now that she’s gone, the house is what connects us to her. Although it may ultimately be sold, there’s no urgency. My mother and her sisters are still sorting through the detritus of years, dispersing mementos. My aunt found great solace staying there in the days following the funeral, and it’s where she stays whenever she comes back to town. She says she feels peaceful there and sleeps better there than she does anywhere else. Whenever she comes back, the family gathers there. Sometimes we cook. Always we eat. It’s where we were fed.

Raleigh native June Spence is the author of Change Baby amd Missing Women and Others, which was a New York Times Notable Book of the Year. Her work has appeared in The Southern Review, The Oxford American, Puerto Del Sol, and Roanoke Review.