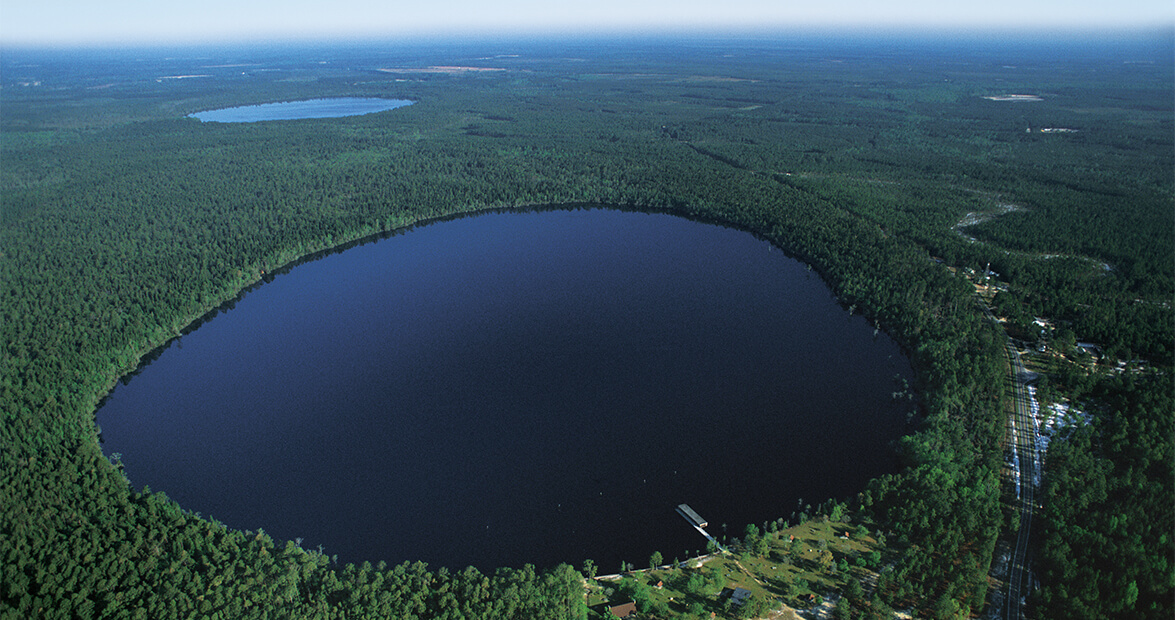 For now, let’s avoid the boggy slog. Let’s not wade too deep into the origin theories and decades-long scientific debates as to how Carolina Bays — the oval swamplands that look like elongated moon craters — came to be. Meteor shower? Melting icebergs? Exploding comet? Maybe, maybe, and could be. I just don’t know.

Instead, let’s focus on what cannot be debated: Scattered along the Atlantic Seaboard, from Delaware to northern Florida, are about 500,000 egg-shaped wetland depressions, with the majority of them found in North Carolina and South Carolina. They are rimmed with ramparts of white sand, some of which are several feet high. Some bays seem to be overlain on top of other bays. Others exist in perfectly ovoid forms. North Carolina boasts one of the largest Carolina Bays in the world, Lake Waccamaw, as well as the densest accumulation of wetlands: Bladen County has some 900 bays. All told, they cover about half of the county’s land area.

Despite their near-ubiquity in the Coastal Plain, no one knew about Carolina Bays until the advent of black-and-white aerial photography in the 1930s, when photos revealed farmland and forest pocked with craters. The discovery kicked off a welter of national press and scientific investigation. Nevertheless, nearly 80 years later, Carolina Bays remain deliciously mysterious.

Bays have faced their share of challenges. Most Carolina Bays have been altered by the plow, the bulldozer, or the asphalt roller. But those that remain whole and intact are a trove of wildness and ancient life. Soaring longleaf pines may shade the sand rims, while pond cypresses root in the peaty shallows. Sweet bay and red bay and loblolly bay scent the bogs with a swampy spice. Rare plants, such as tiny sedges and tall-awned meadow beauty, flourish along the bog’s margins. In the spring and fall, many Carolina Bays turn into concert halls with frogs and toads calling in a raucous breeding chorus. Some of the state’s rarest amphibians are known from the bays: Carolina gopher frog, tiger salamander, ornate chorus frog, and pine barrens tree frog. Migrating warblers throng the bays’ tangled shrubs. Anhingas, herons, and egrets nest in rookeries, their young safe in the soaring branches of gum and cypress trees.

We’re lucky to have a good number of large bays in the public realm in North Carolina. In addition to Lake Waccamaw, state parks and state natural areas protect Jones Lake, Salters Lake, Singletary Lake, Horseshoe Lake, White Lake, Lake Phelps, Bay Tree Lake, and Bushy Lake. Most of these are large Carolina Bay lakes, filled with water year-round, which makes them easier to access. You can launch a boat, cast to bass and catfish, and even haul a water-skier across some of these lakes.

But, by far, most Carolina Bays are small and tangled thickets of fetterbush and floating peat mats, difficult to reach unless you’re a black-throated green warbler or a glossy crayfish snake. They are largely forgotten, still, tucked out of the way along some farmer’s back field, or deep in the recesses of a sprawling forest. Find one, and you’ll find yourself closer to the heart of what a Carolina Bay can be: an island of wildness in a world largely tamed, a few acres of the primeval past passed over by progress. But be forewarned: This is tough going. John Lawson, the colonial explorer who crossed both Carolinas in 1700, described his own boggy slog through a Carolina Bay, the first written description on record. He trudged through “a prodigious wide and deep Swamp,” he wrote, “being forc’d to strip stark-naked and much a-do to save ourselves from drowning.”

Drowning in a Carolina Bay, that is, not drowning in origin theories.