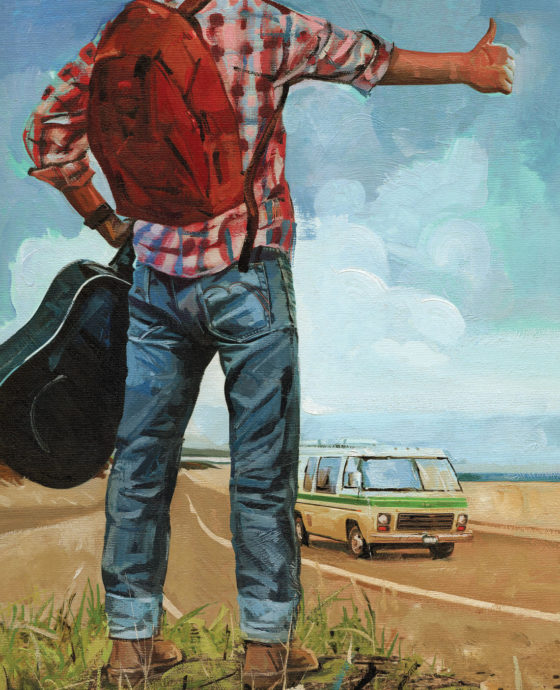 I hitchhiked because I was broke and wanted to see America — the America of midnight truckers and nomad surfers and Wild West cowboys.

During the summer after high school, living in a tent on Hatteras Island, I got the bug, day-tripping from Kitty Hawk to Ocracoke in the cars and trucks of strangers. In college, I worked multiple jobs to pay tuition and rent, and every summer I stuffed whatever leftover cash I had in my boot and hit the road.

Hitchhiking was a common mode of transport for college kids heading home from break and soldiers on leave — the 1970s was a more trusting time. For to hitchhike is to adopt a core philosophical position: Trust in strangers. And, of course, they must trust you on sight.

Yes, it’s possible that the next car to come along may be driven by an ax-murdering maniac, but you have to make an essential leap of faith. Through four seasons and some 10,000 miles of hitchhiking throughout the Carolinas, from coast to coast, from New England to Florida, through the eternal corn and wheat fields of the Midwest and the rugged reaches of the desert West, I was rewarded in that faith.

Now, even such abiding faith is not blind. I traveled by my “always” list:

• Remain alert — never fall asleep in any ride.
• Carry enough cash for bus fare home and a couple of nights in a motel, in case you can’t
hitch out or you get sick and need to lie up and recover.
• Make an exit strategy: a pretext to stop, even a plan for defending yourself. I kept careful track of rest areas and truck stops as we passed them, noticed what was around us on the highway. I never had to use an exit strategy.
• Put all of your stuff in one bag and watch that bag. I traveled with a red backpack and a guitar attached with a homemade harness, and I never left them unattended in somebody’s vehicle or anywhere else.
• Keep clean. Though I usually slept in the open in woods or thickets off the side of the road, I washed every day — in truck stop rest-rooms or creeks. Nobody wants to invite a scurvy-looking tramp into their car.
• Look as nonthreatening as possible. I typically wore blue jeans and a flannel shirt — the standard college kid uniform in those days. And the old Gibson guitar announced that I was harmless.
• Carry water. You can go without food for days, but you must always have water.

Keep clean. Nobody wants to invite a scurvy-looking tramp into their car.

And my one “never”: Never get into any vehicle if your sixth sense tells you not to, even if nothing seems wrong. There are things that your body senses before your mind catches up. (Strangely enough, on a jaunt home from spring break in Fort Lauderdale, I took a ride with three parolees from Huntsville, Texas, in an old Chevy beater. They told me straight out who they were and hoped I had a couple dollars to pitch in for gas — I gave them $8.)

I kept notebooks of my travels, with sketchy entries like this one from the summer of 1975: Long wait to MGB and Navy guy who took me to near Moyock, Carolina border.

My next ride that trip was aboard a lime-green GMC Motorhome, a futuristic, 26-foot-long rolling spaceship. I sat in a swivel chair as the intracoastal scenery scrolled past, and sipped rum and Cokes with two retired railroaders and their wives — a son-in-law was the designated driver. When they dropped me off in the darkness of Oregon Inlet campground, I stepped out dizzily and sprawled flat on my face in the sand.

Why did any of them stop for me? I once asked an old fellow who picked me up in a weathered pickup on a back road in Maryland. He told me, “Every man on this highway has a mother who loves him, and they aren’t all bad sons.”

To hitchhike is to make instant friends who can disappear from your life a few miles down the road, yet stick in your memory for years.

Like the young family who picked me up when I was headed to the Union Grove Fiddlers Convention. I scrambled into the wayback of their VW Bug and played folk songs for their two restive children.

To hitchhike is to make instant friends who can disappear from your life a few miles down the road.

Or the woman outside Nashville who sped past me on the interstate in a Cadillac doing 90 miles an hour, then screeched to a halt on the shoulder 50 yards ahead and waved me to come on. She’d seen my cowboy boots and then showed me hers — American bicentennial boots in red-white-and-blue leather, with bald eagles on the sides. She drove as fast as she wanted, she said, because her father and brother were both on the highway patrol. She was sassy and funny and gave me the fastest ride I’d ever had.

Or the lean cowboy who picked me up in San Bernardino — he, too, saw my boots — and he wanted to know if I could give him a line on a friend of his on the rodeo circuit.

One summer in northern California, I scored a ride with two bearded jazz musicians in a VW Microbus. They smoked reefer and talked music all the way into Truckee, where the driver (an Allen Ginsberg lookalike) ignored a temporary barrier and turned onto the main street, right into the head of the Fourth of July parade. He slowed down, and the two stoned musicians waved out their windows as if they were the grand marshals.

Sometimes, the people who picked me up wanted me to help with the driving, like the guy ferrying a load of shrimp from the Gulf Coast in a refrigerated box truck. I drove through the Georgia night while he caught some shut-eye.

And always, the road unspooled like an endless promise — the scenery scrubbed by salt wind or rock dust, contours of lush pasture or hardpan desert or rank tidal creeks, silver bays scalloped under a reaching breeze or tobacco fields frozen in still, sun-drenched heat, the sky blistering with sun or stinging with silver needles of hard rain, the light changing from purple to azure to smoky gray.

Each ride was a new song, a new story to learn, a new chance to tell any story about myself that I cared to, true or not. And somewhere around the next bend, or the next, lay a nighttime camp, a bed of earth and a deep sleep softened by highway dreams.