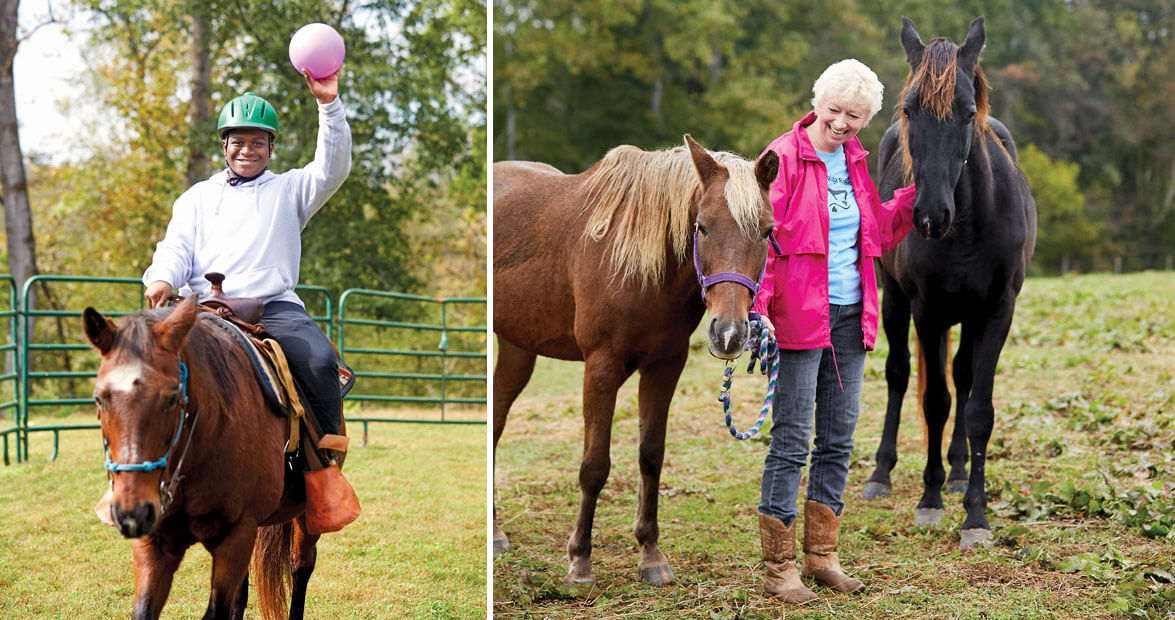 Physical therapist Kathryn Davis strides over the muddy ground during a practice horse show at Rolling Ridge Riding, handing out ribbons to the “most joyful rider,” the speediest, the most precise. They’re not awards that you would find at your average horse show. Then again, these aren’t your average riders.

Fifteen-year-old Keynon Settle trots his horse easily around the ring, deftly navigating around barrels and toward rings held out by volunteers. He dismounts gracefully, a calm confidence belying the risk that such a maneuver presents to him. Born with a rare disorder, Settle’s bones are so fragile that they could snap from simply walking up a staircase or being on the receiving end of an overzealous hug.

When Davis and her husband, Mark, bought the Rockingham County farm in 1999, they thought they’d just be producing hay and beef. Now, Davis and an all-in community of volunteers also provide therapeutic horseback riding (known as hippotherapy) that produces what looks a lot like miracles.

Davis calls it horse magic. And it started by accident. 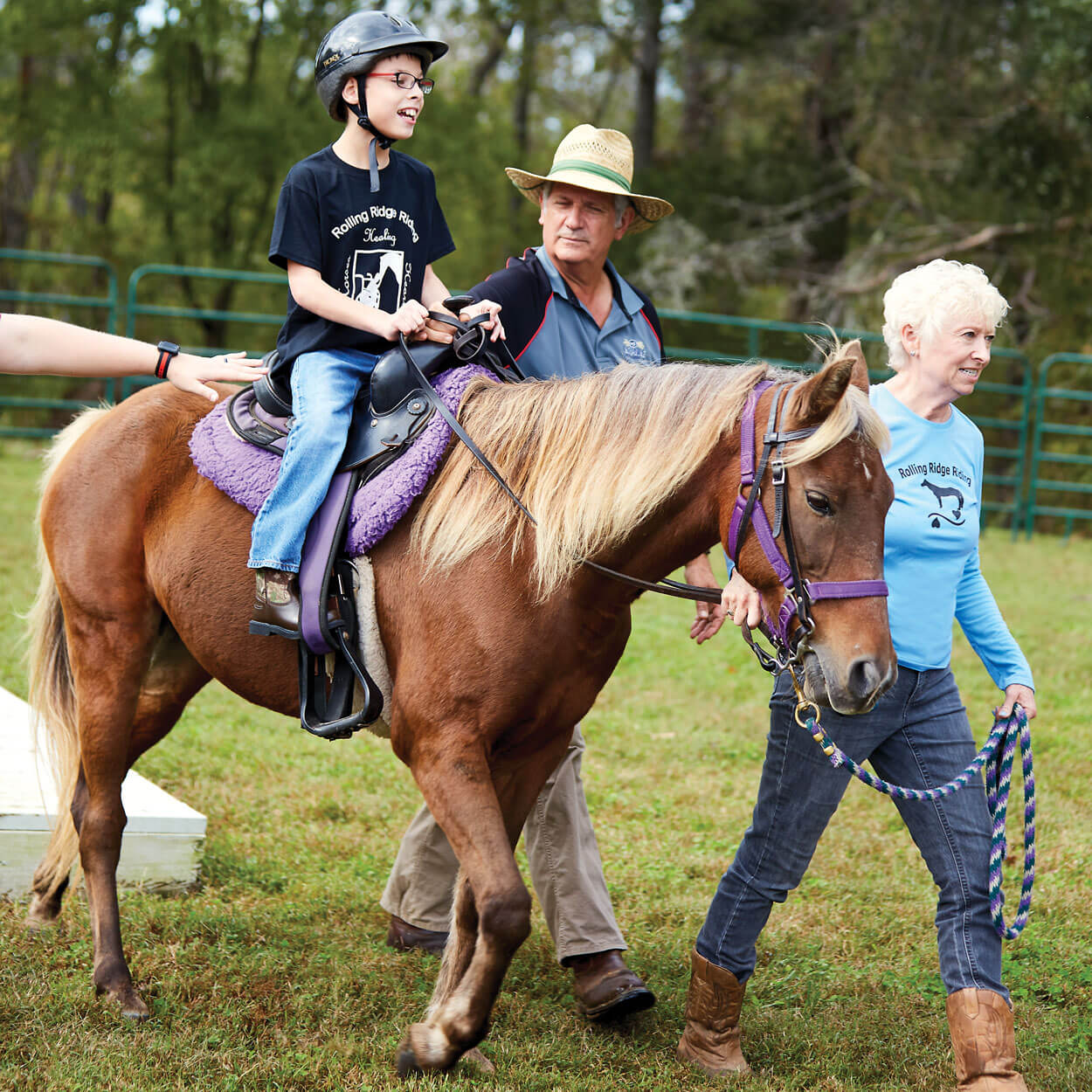 Mark and Kathryn Davis help kids like Isaac Witt overcome obstacles by teaching them how to ride and interact with gentle horses. photograph by Stacey Van Berkel

Back in 2000, Davis tried to convince the parents of one of her physical therapy patients to send their 3-year-old daughter to another county for hippotherapy to help her walk; Davis explains that a horse’s motion replicates the pelvic movements needed to walk, and strengthens balance and core muscles. But the family couldn’t afford the gas to drive that far. So Davis plopped the little girl on a borrowed palomino named Honey, who was at Rolling Ridge to munch down the grass. Three weeks later, the girl took her first steps.

After that, Davis figured she’d get back to working on the farm and renovating the house. But the phone started ringing off the hook with calls from families who’d heard about the horse magic and desperately wanted similar therapy for their special-needs children.

Davis became a certified hippo-therapist and opened Rolling Ridge Riding as a nonprofit. Today, eight horses provide tailored therapy rides and lessons to children with a range of physical and behavioral disorders. These docile creatures are “bomb-proof,” Davis says. “There’s not a single horse in North Carolina that could stand against them — I don’t care how many medals they’ve won at horse shows.” 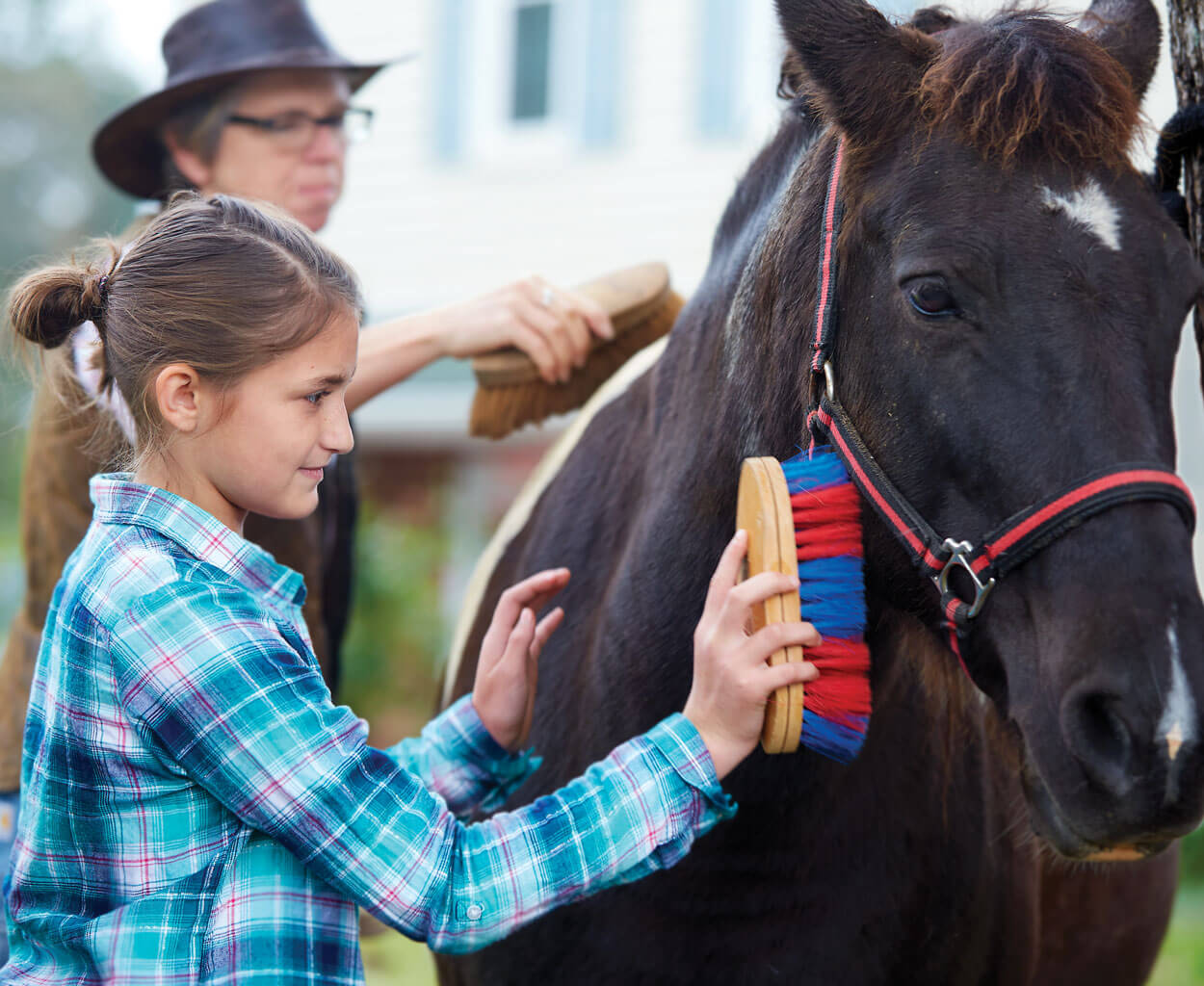 At the practice show, one rider begins hitting her horse’s neck and saddle, expressing the desire to dismount loudly and forcefully. The animal stands perfectly still, calmly waiting as volunteers help the girl down from his back and off to the side of the ring.

“You see kids accomplish things that you never would have dreamed or imagined.”

Volunteer Lorrie Ellington is just as calm. She started helping at Rolling Ridge Riding a decade ago, when she was 13 years old. She’s seen kids who’ve shocked their doctors by learning to walk or talk after sessions at Rolling Ridge, and ones who’ve shown more incremental progress, too. Ellington says that at the farm, unlike in competitive riding programs, everyone is happy for everyone else’s accomplishments. “Even on a bad day, you leave feeling good,” she says.

Davis agrees. “All of the volunteers, if they stay long enough, discover that the children help them,” she says. “They inspire them. You see kids accomplish things that you never would have dreamed or imagined.”

Kids like Settle, who started riding therapy as a 3-year-old with leg braces and is now an advanced rider competing at the state level. Against all odds, he’s never broken a bone on a horse. “I’m not really a victim; I’m more of a victor with this disease,” he says of what riding has taught him. “I can overcome things.”