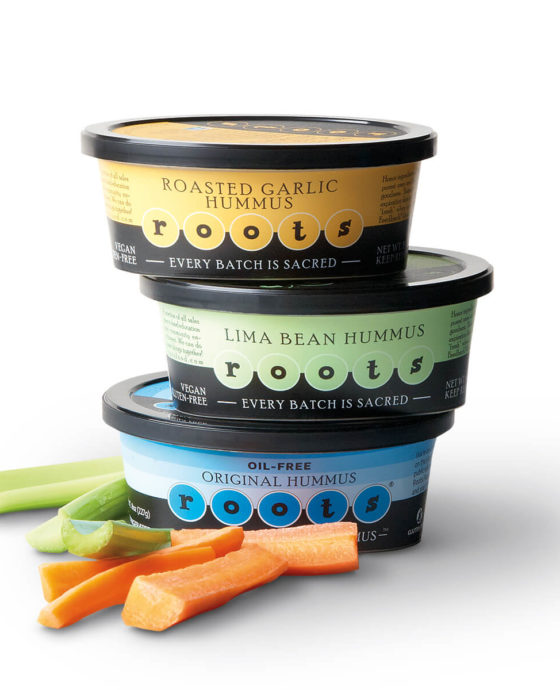 If it weren’t for the nets carefully stretched over staff members’ beards and, of course, for the great heaping hoppers of garbanzo beans everywhere, the new Roots Hummus production facility could pass as a trendy nightclub in Asheville. Bright, psychedelic murals painted by artist Gus Cutty span the cavernous 27,000-square-foot space, a former movie studio. It’s located on the grounds of local beer pioneer Highland Brewing — an appropriate home for a company that bills itself as “the microbrew of hummus.”

“We’re fun, we’re funky, we have a good time, but we take quality seriously,” says CEO Michael Porterfield as he walks through the production rooms, whose walls are painted the same lively colors as the company’s signature packaging: warm red for the hot chipotle flavor, leafy green to represent their spinach hummus, a yellow that echoes tubs of their original take on the classic Middle Eastern dip. Usually made from high-protein chickpeas (also known as garbanzo beans), tahini (a sesame paste), lemon juice, seasonings like cumin, and oil, hummus is a healthy and ancient food that’s long had a modern following. 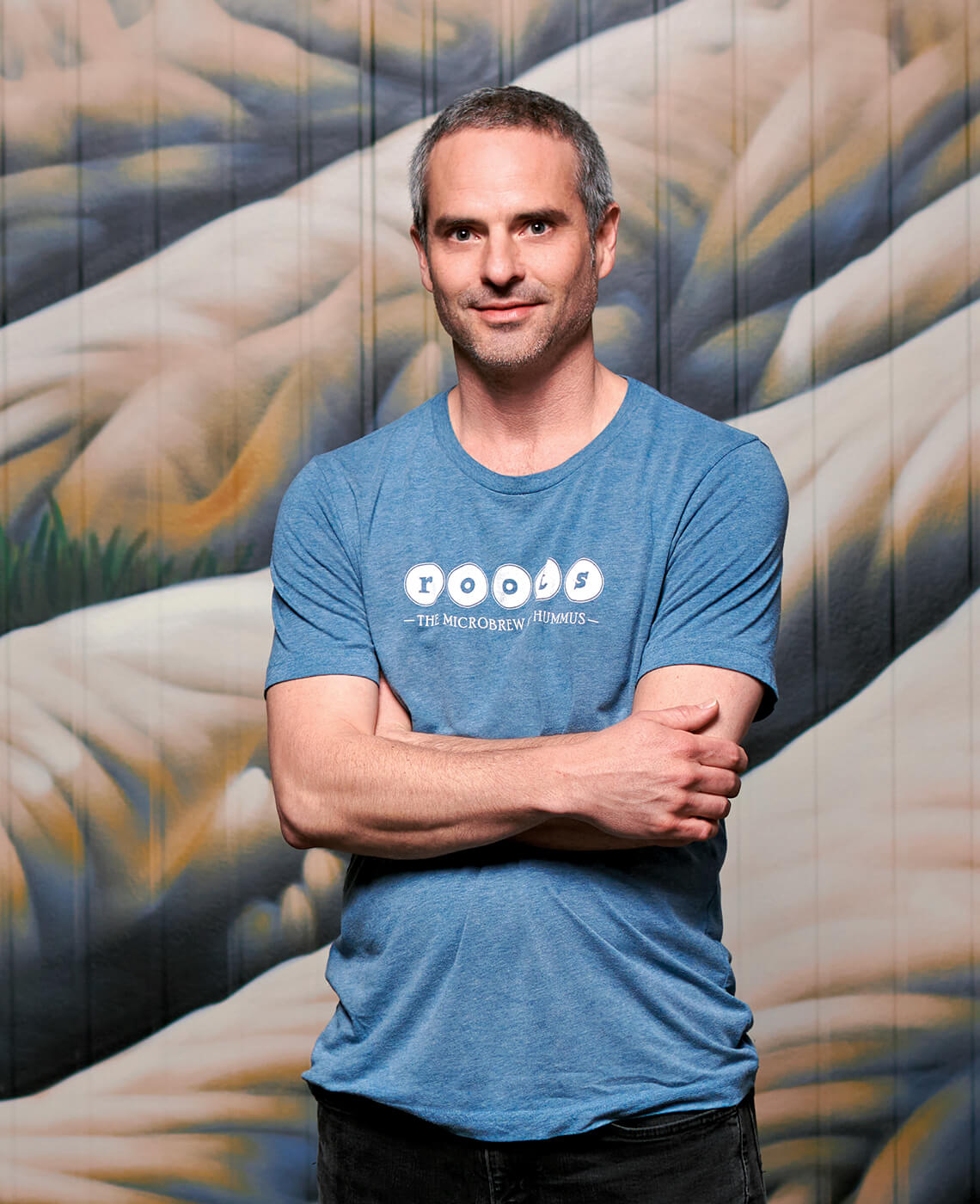 And Roots has been whipping up cult-favorite flavors since founder Matt Parris started making hummus in a tiny co-op kitchen back in 2006. A musician who had tried careers in teaching and telecommunications before landing in the food industry, Parris launched a little West Asheville café that eventually became a catering and wholesale business offering a range of salads, salsas, and dips. When one of his grocery-store customers asked him to start packaging his hummus, Parris and his crew did it by hand with ice cream scoops and heat guns.

His success in selling to local stores caught the attention of health-food behemoth Whole Foods when it came to town in the early 2010s. That’s when the business really took off. In 2013, Parris’s brother Lowell joined the company as chief operating officer, bringing business experience from the tech world, and Porterfield came on board a few years later. Roots now focuses exclusively on hummus, and it produces about 40,000 pounds a week, in 14 flavors. Parris attributes the company’s success to the fact that Roots hummus is still made with the same focus on ingredients as it has been since his kitchen days.

“To me, our hummus is vibrant — it tastes fresh,” he says. “There’s a difference in the way that cumin is going to taste if you buy it ground and just toss it in, versus toasting it and grinding it fresh. And it would be a lot easier and cheaper to use canned red bell peppers, but we roast our own, so there’s more depth of flavor.”

Roots also sources its chickpeas carefully, working with a co-op of producers who avoid herbicides and pesticides that have raised health concerns in recent years. Once they arrive at the Asheville facility, the beans make their way along a production line, where they’re rinsed, boiled, chilled, churned into a puree, and mixed with flavors like sriracha, which the company makes itself, and Thai coconut curry. Last year, Roots debuted four oil-free flavors — the first in the commercial hummus market, as far as Parris and Porterfield know — which have been snapped up by the Publix grocery chain, among others.

Even as the company has expanded, moving from its original 1,200-square-foot facility to its new space last year and offering its products in more than 3,000 stores across the country, Roots has remained true to its, well, roots, and to Parris’s early passion for education.

“My intention has always been for us to help people in our community and help the earth,” he says. For several years, Roots led a project-based learning program in three Asheville schools, building gardens and helping teachers create lesson plans around them. Parris is now planning to turn the old Roots headquarters into a café that will offer both healthy options for the public and a home base for local teachers in the after-school hours.

And the new production facility may actually become the nightclub it resembles. The Roots crew — “A lot of us are either musicians or artists or both,” Porterfield says — has hosted a few live music events in the space, and the company routinely ships free hummus to touring acts they’ve gotten to know who crave healthy options on the road. “I can’t give you names,” he says with a cagey smile. “But some of the people who have requested our hummus are very popular artists.” If those stars decide to sample their favorite snack at its source, Roots is ready to welcome them.