One item on the list of my failures as a parent — it is one item of just two, let me add — is the fact that I waited so long to build a backyard garden for my daughter.

How that little girl wanted a garden. Even as a teenager and then a young woman, Markie begged me to build a garden box. She wanted to take care of something, and as she grew older, she began to understand a garden as a way of living on her own terms, with a lighter touch on the land.

But I had a thick stack of excuses. There wasn’t enough sunlight in the yard. There wasn’t a flat spot. The squirrels would have a heyday, and whatever they didn’t eat, the dog would dig up. It breaks my heart to recall how I stonewalled such a simple request.

Then, in those convulsive months at the beginning of the Covid pandemic, both Markie and Jack had to leave their respective colleges, and moved to our little house in downtown Morehead City. There, I finally built my daughter a garden box. It wasn’t much, to be honest, just a rectangle of two-by-sixes nailed together and shoved against the side-yard fence. It was more like a garden shoebox.

She tended that garden like a mother bird tends to her chicks. First thing in the morning, she talked to her plants with a coffee mug in hand. She watered the garden in her pajamas. She fretted over every brown spot and drooping leaf. For my birthday, she brought me the first ripe jalapeños, like the ancients of yore presented their first-fruits to the temple. That garden box anchored her at a time when the world itself seemed to slip from its moorings. She will never again in her life, she insists, be without a garden.

And then she left. Landed a job in Atlanta and flew away in early July. And the garden box became the thing I feared it would be all along: an ugly brown smudge in the backyard that did little but remind me that Markie was gone. That my first child had done what Julie and I knew both children would: find their own way in this world. “Roots and wings,” my mother-in-law often said. “That’s a parent’s job — give their children roots and wings. And you can’t be mad when they decide to use the latter.”

I wasn’t mad, but definitely a little sad. And at times, more than a little. I made plans to tear out the garden box and let the grass grow back over the wound, but that seemed like a lot of work. Instead, I bought a wildflower seed mix that promised low maintenance. Just plant and water, which was about my gardening speed. I figured I’d give the seeds a try just to fill in the hole, then I’d tear up the garden box over the winter.

You can imagine my surprise, then, when I became slightly obsessed with that garden box. The first wildflower shoots emerged in a week. Soon, every trip to Morehead City found me on my hands and knees, weeding the garden. I developed a psychologically unbalanced hatred of pennywort. What was this godawful plant that defied my endless plucking? Through late summer and into fall, I fussed over Markie’s garden box. I’m sure I watered it while in my pajamas. I know I talked to it a time or two. 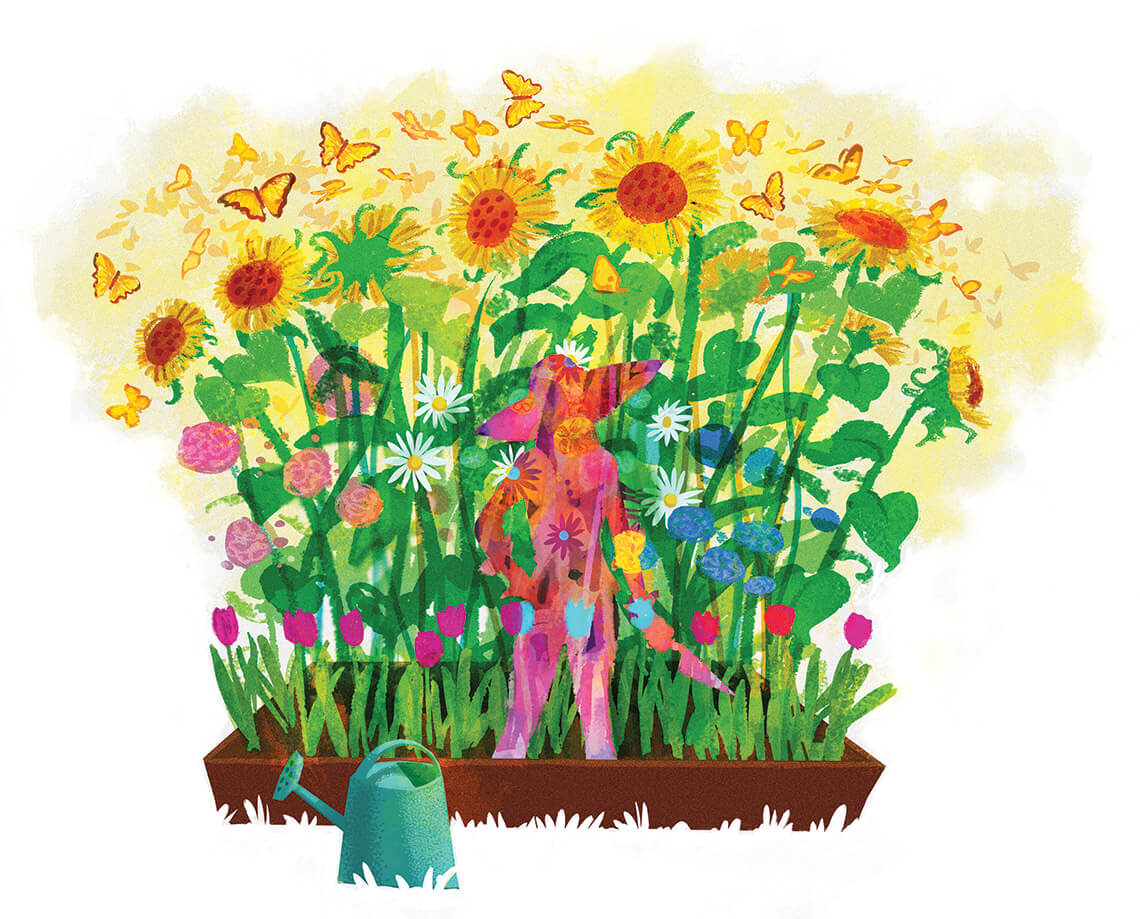 Maybe it was the good soil, or maybe it was Markie’s karmic presence in that little patch of ground, but the garden box exploded with wildflowers. Julie and I dubbed it “the prairie.” We marveled at how, every few weeks, different species would bloom, in unfolding chapters of cornflowers and coreopsis and black-eyed Susans and dwarf sunflowers. One day, I was writing from the back porch sofa when a dozen monarch butterflies descended on the garden box. I watched the butterflies for the better part of a morning, and it wasn’t lost on me that each of those monarchs was on its own personal journey, headed toward Mexico, on wings far stronger than their delicate appearance suggested.

I didn’t recognize it at first, although it’s obvious to me now, but the garden box grew into a metaphor of my love for my daughter, and of the wonder that Julie and I have helped raise such a caring human being. On my hands and knees, waging battle with the pennywort and crabgrass, I pulled out all that detracted from the healthy growth I envisioned. That’s what parenting feels like sometimes. All through late summer and fall, watching my smartphone in Raleigh as thunderstorms raged in Morehead City, I fretted for my garden box and worried for its safety. Which is what parenting feels like sometimes.

Here’s another similarity: That wildflower mix was determined to go its own way. I could weed and prune and cuss and water, but ultimately — like Markie — those flowers had their own ideas about when and how to sprout and grow. A little wild and ornery at times, but wholly committed to their own path forward.

The garden box inspired Julie and me to take more careful notice of the world around us, and take a bit more care of it. Like Markie, it made us better stewards. Over the years, she had weaned the family off of plastic water bottles, paper towels, and food waste. We’re buying more local goods and choosing less packaging because of her example. And her constant haranguing, if I’m being truthful. Like Markie, that garden box presented challenges. But we all sprout a few weeds now and then, and you can’t grow good roots without a little rough weather.

And, like Markie, one day it was time to say goodbye.

The prairie lasted until mid-November, far longer than I imagined it would. Just before Thanksgiving last year, I pulled out half the plants and chopped the remainder into bits with a shovel, mixing the leavings into the soil. Let the harvest of that first season fertilize and nurture the growth yet to come.

Now it’s April, and time to plant the garden again. Julie and I aren’t at the coast enough to nurture a vegetable garden Markie-style, so it’s back to the wildflower mix I’ll go. Plant and weed and hope for the best, and wait for the butterflies to remind me of how strong Markie’s wings grew to be.

But never, I pray with a parent’s heart, stronger than her roots.