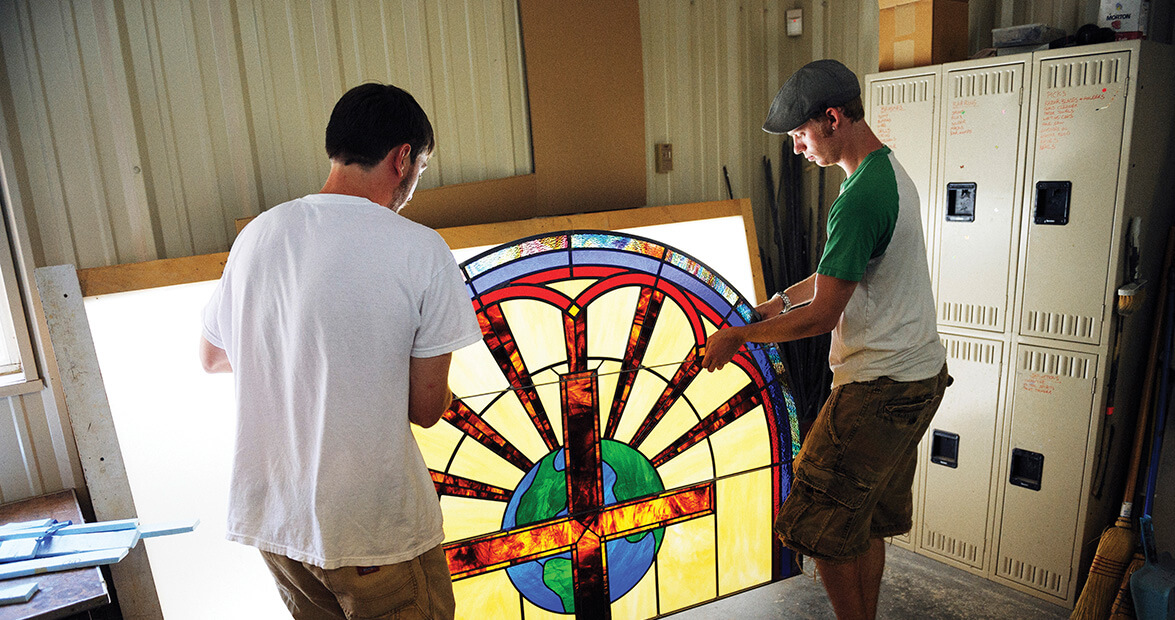 Al Priest has spent his life caring for fragile things.

In his younger days as a paramedic in Forsyth County, he was trained to save lives. After he got married, he and his wife took a class on staining glass. Everything he made, Priest says, people wanted, so he started selling his work at craft shows. He bought his supplies from Brad Brown, who owned a stained-glass studio in Winston-Salem. In 1985, they went into business together. Their company, Salem Stained Glass, remained in Old Salem for 16 years until they outgrew their space, and moved to an 8,400-square-foot facility in East Bend.

When Salem Stained Glass creates windows for homes and churches, its team of artists makes a scale drawing of a design. If the sketch is approved, they make a pattern the size of the opening of the window, choose colors and textures of glass, enter those colors into the pattern, and cut the pattern to build the window by hand. They wrap a lead “came,” or divider bar, around each piece; then solder the joints; “putty,” or cement, the window; and install it in its frame. “And then it’s there for 100 years,” Priest says.

Salem still takes on those commissioned projects, but Priest is especially proud of the restorations they’ve done across the country. In 1995, they gave new life to “The Good Knight,” a 100-year-old piece designed by artist John La Farge, the creator of opalescent glass. The window was exposed to the elements in Detroit for more than 50 years, then stored in a church basement for nearly as long. Priest and Brown restored the window for a private collector, taking apart layers of glass, cleaning out dirt and grime, gluing cracks, and replacing glass. Yale University later bought the piece.

“The colors are so rich, you can’t look at stained glass and not be intrigued by the whole thing,” Priest says. “All during the day the light changes, unlike a painting on the wall. It’s a beautiful thing.”