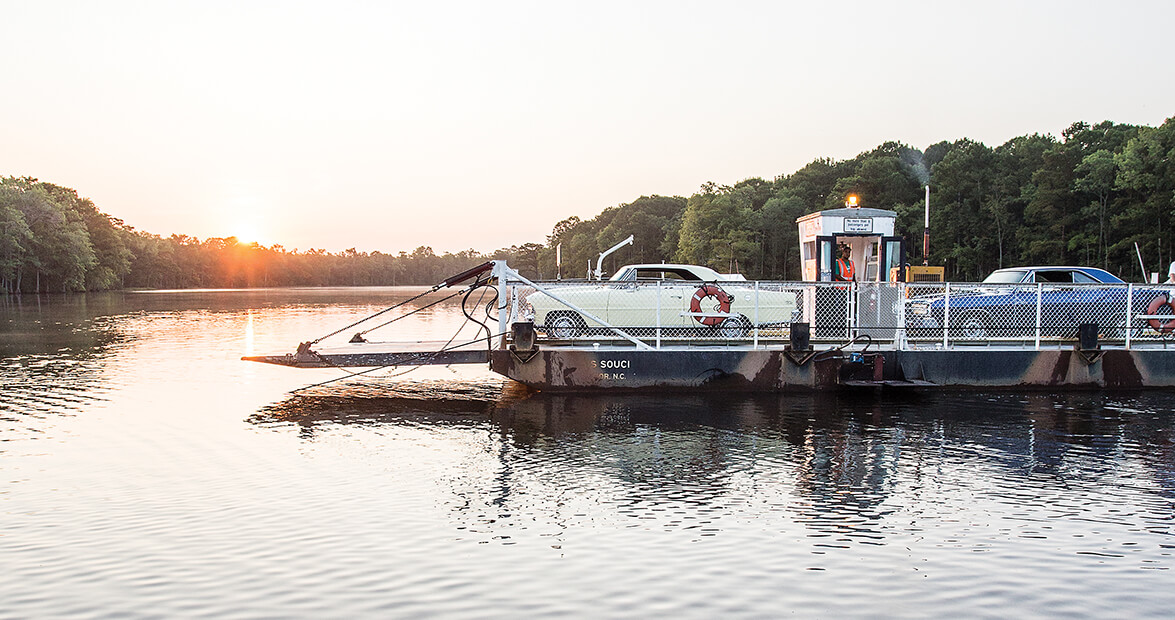 Greg Fleming sits in his white sedan, its tires only about a foot above the Cashie River, on a gravel road so low that the waves from a ski boat could wash water over it.

A yellow gate stops absentminded drivers from following the road into the river. About 240 yards away, on the other side of the Cashie, a man walks out of a shack, and a diesel engine rumbles to life. A small white ferry starts pulling itself across, following a dripping steel cable that emerges from the water.

“I did not know this was here,” Greg says. He’d been dutifully following his GPS from Windsor to Pinetown, which is odd, because this ferry, the Sans Souci Ferry, isn’t really on the way between the two places. Greg is five miles upstream from the bridge he probably should be crossing. So let’s just say it: Greg is lost.

“Now that I’m looking at it,” he says of the approaching ferry, “I’m not sure if I trust it.”

The ferry operator will later assure me that he’s never witnessed a car falling off the ferry, although he tells a story of a former operator who forgot to tie the ferry to a post on the shore 20 years ago; a pickup truck’s tires effectively spun the ferry out from under it, dropping truck and driver into the shallow water. The operator also says people ask him how often the cable is replaced (every few years), and whether it has ever snapped (not on his watch).

Greg doesn’t know this, so he slowly edges his car over a metal ramp onto the ferry. “This is crazy,” he says.

It’s not that crazy. The Sans Souci Ferry, in swampy southern Bertie County, is one of only three remaining cable-guided ferries left in North Carolina. Once, they were lifelines.

The Ferry is now mostly a carnival ride, because it’s not on the way from anywhere to anywhere. It’s not on most state maps. It’s tucked away, hidden somewhere in eastern North Carolina’s quilt of thick woods and fields of wheat, tobacco, and clary sage, on a bend in the Cashie River where cypress knees poke above the surface of the calm water.

The operator today is a laid-back Phil Baker, who says, “There’s nothing here to generate anything other than being laid-back.” Most of the time, he sits on a recliner inside the ferry-keeper’s shack, watching television. “If it wasn’t for TV, yeah, I’d probably go out of my mind,” he says. Point taken. Sans souci is French for “carefree,” after all.

Greg has now completed the five-minute trip across the Cashie and continued on his way, still puzzled. He’s not alone: 18-wheelers sometimes show up, also led here by GPS. They can’t cross, but dump trucks can, if they’re empty. A Rolls-Royce came last year. Once, a church brought people to be baptized at the end of the boat ramp next to the ferry. Europeans, historians, and ferry fans come. They all ride for free.

Meta Lavern Hyman crosses two or three times a day; right now, she’s taking mail to her cousin. “I thank God for this here,” she says.

She’s a local, so she’s content to talk through the trip, ignoring the unhooking and rehooking of chains, the cable that rises out of the water when the ferry starts across, the ramp that comes down a few yards from shore, cutting through the dark water. This is not a secret. It is not a relic. This is not a thing to cross off a checklist, or an experience to brag about. To Lavern, the ferry is merely what it’s supposed to be: a shorter route. She drives off, but she’ll be back.