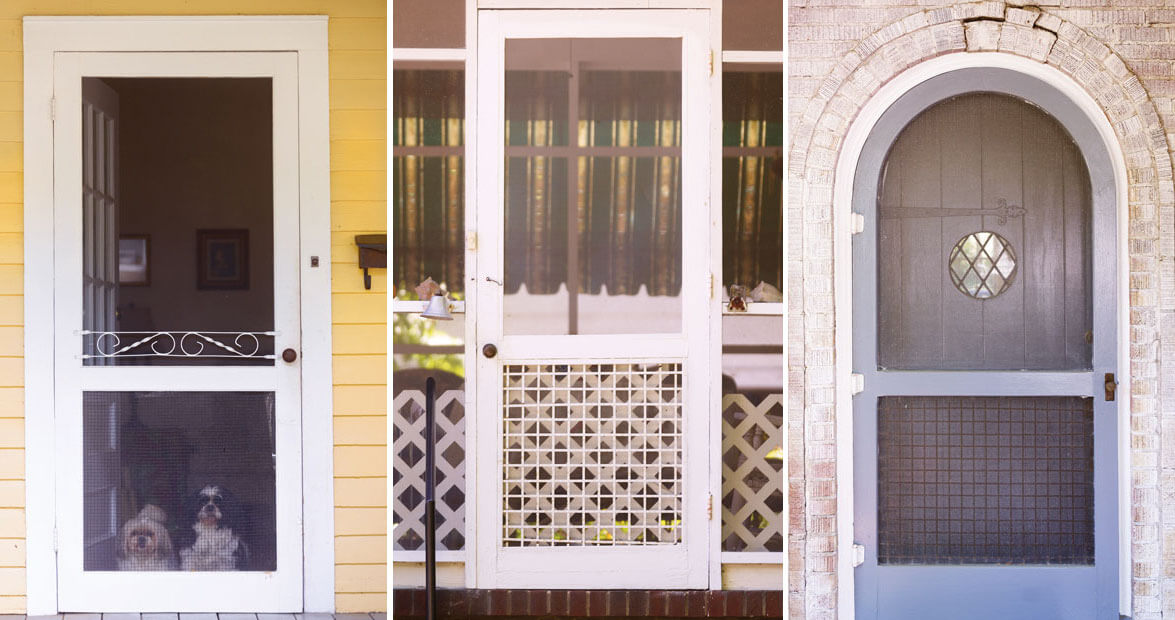 Consider the turnbuckle. It’s a simple piece of hardware; you can pick one up for a few bucks almost anywhere, yet the thing is an engineering marvel. Your weary screen door sags, grinding an arc into the porch floor with its outside corner, sullenly leaning against the doorjamb every time it wobbles to a close. But install a turnbuckle, twist, and the door returns to energy and vigor, swinging free and snapping into its frame with a resounding wham-pap-pap!

The turnbuckle is nothing more than a long bolt connecting two extended screw eyes with opposing threads. That is, when you twist the bolt, it either pulls both arms toward its center or extends both arms away. Angle it across your screen door, the lower end on the far frame, and as you tighten, it lifts that slumping outside, curing that dragging corner. And like the car wash that shows your car anew or the cleaning that makes you suddenly notice your carpet, the turnbuckle that repairs it reminds you: the screen door. Thank goodness for the screen door.

It turns out there are a lot of reasons for screen door gratitude, though I did not seek them. I set out instead to sing of the screen door itself, that semipermeable membrane that turns the inside into the outside; that invites the fresh air, the mockingbird morning, and the gently rustling leaves, while keeping out mosquito and moth. That half-barrier that says to the toddler that the door is shut and we stay inside, but says to the neighbor we’re at home, come on in. You yell “Anybody home?” through the screen door not to see if anyone is home; you yell it to announce that you’re coming in. The screen door turns the house into porch, the porch into the screened-in porch, rendering life airy and endurable — and blessedly unairconditioned — through the long, buggy evenings of summer. The screen door is the gateway to the Southern kitchen. 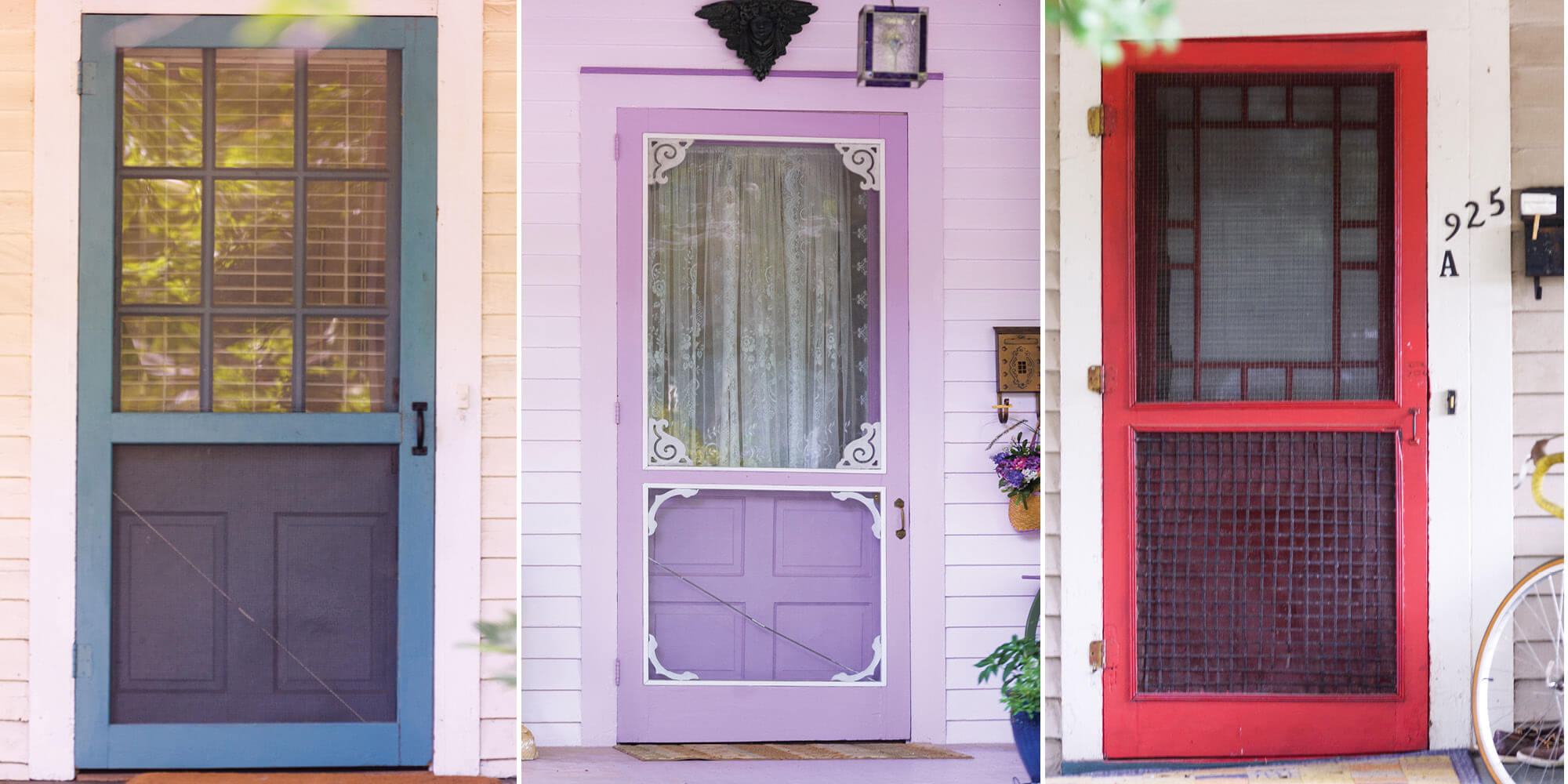 We are told by a book called Women Invent! that in 1887 one “Hannah Harger of Manchester, Iowa, worried about all the flies that were bothering her babies, invented and gained a patent for the screen door.” This fact infests the Internet like those pesky flies, but it has no provenance. Given that that the State Historical Society of Iowa could find not a single mention of Hannah Harger in its archives, in Manchester or anyplace else, I am inclined to question at least Harger’s location, if not her very existence. When you think about it, where invention is concerned, the screen itself is the real breakthrough; putting a screen in a door is merely a finial, the masterstroke at the end of a development arc that started in ancient times.

Indian and Moorish architecture shows signs of ornate stone screens, which made nice room separators, and I suppose, kept out the tigers, but bugs still had plenty of access. Past civilizations also used fabric screens: in “The Parting,” written in the eighth century, Chinese poet Li Po describes a noblewoman hearing voices through a “silken window-screen.” Fabric probably kept out bugs fairly well, though like the tapestries Europeans hung over windows to conserve heat and keep out birds, they would have restricted air circulation and dimmed light, so the puzzle of human living still had a hole waiting to be filled by the as-yet-to-be-invented screen.

In the New World, William Wood in 1634 wrote New England Prospects, showing that even the earliest European settlers to Boston worried about “the three great annoyances of Woolves, Rattle-snakes and Musketoes.” Woolves and Rattle-snakes, to be sure, could be kept out with standard physical barriers, but those Musketoes demanded something else. Fortunately cheesecloth, with its open weave designed to allow water to drain from whey, appeared in Europe around the same time. It made a satisfactory screen, but it lacked durability.

People had been working on wire window screening for a long time — the American Farmer of December 13, 1822, includes an advertisement for “Wove Wire for Window Screens” — but apparently the wire rusted and rotted too quickly to satisfy. As late as July 4, 1861, a Mississippi judge named Jason Niles described his surroundings: “At night doors and windows all closed to keep out the musketoes, that buzz and hum and bite continually.” Imagine how pleasant those closed windows and doors must have made a nice Southern July night.

During the Civil War, a Connecticut sieve company called Gilbert and Bennett fretted about what to do with the screening for sieves that built up in warehouses when the company lost access to Southern markets during the war. According to the University of Virginia Health Sciences Library, an employee decided to paint the wire mesh to prevent rust and then sold it as window screen.

Screens, since then, have made all the difference, especially in the South. In the 1930s, “nearly a third of the inhabitants of the rural South had chronic malaria, from living in houses with no window screens,” says Clifton Meador in Med School, his memoir about learning medicine. Pesticides and mosquito control helped, but probably the simplest and most successful element of the eradication of malaria in the South was nothing more complex than screening windows and keeping the stinking bugs out; the Rockefeller Foundation began introducing screening programs in the South as early as 1917.

And again, given all that, putting a screen in a door hardly seems noteworthy. No wonder Ms. Harger’s contribution seems to vanish. 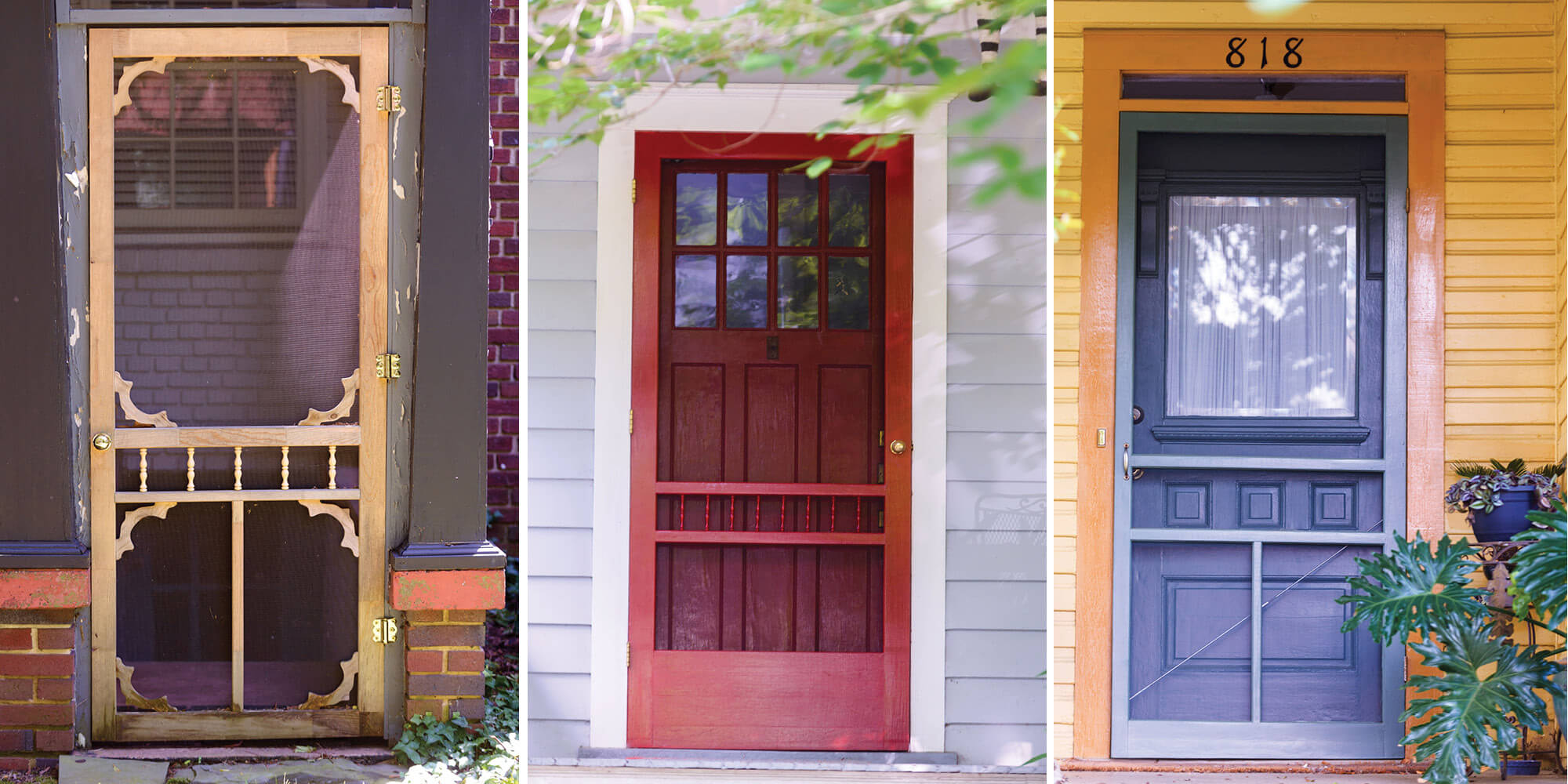 Screen doors keep bugs — and dogs — where they belong. photographs by Matt Hulsman

My education in screens came from books and articles, but your average cat thoroughly understands the workings of a door instinctively. I work from home, and I once lived in an apartment in which you reached the porch through a nice wooden screen door in the kitchen. The cat, Larry, would stand at it and whine, whereupon his well-trained owner would swing the thing open.

A saunterer by nature, Larry would idle through the portal, and in hundreds of trips through I never saw the door get him, although every time I was sure it would. At the last possible second, his tail would jerk — fwip! — straight to the vertical, and the door would slap shut, missing him by the tiniest imaginable measures of space and time. It didn’t seem plausible; he was in, then he was out — the slap of the screen something like the crack of the clapperboard on a movie set.

It was a deep, porch-paint maroon, that door, with, naturally, a rusty turnbuckle and filthy black screens that looked like they had last been cleaned in the 1940s. I certainly gave the next renter no reason to believe otherwise. I don’t think I’ve ever cleaned a screen in a door in my life, and that’s part of the thing’s charm. General filth from the streets, the green stuff from pine trees, those little fripperies the pecan trees drop in the spring, maple helicopters, and dandelion fluff all blow onto the screen door, and all stick in its little squares only to desiccate and eventually vanish, or mostly vanish. Traces remain, keeping screen doors traditionally filthy enough that children pushing their way into and out of screen doors — 40 or 50 times per hour, seemingly — blacken their hands so thoroughly that they require washroom supervision before meals. My grand-father built a screened-in porch onto the house he had when I was growing up, and merely touching the screens of that door — forest green trim, and of course a rusted turnbuckle — carried a sentence of bath without parole. And I don’t believe I ever refrained from touching, either. That dirt — that was part of the screen. It was Grandpa’s screen door, and Grandpa’s dirt, and it put me in contact with the mysterious spirit of inside and outside and Grandpa, and the year’s first slap of that door said “springtime” no less loudly than the budding maples and screaming jays.

How screen doors work makes sense in a way few other doors — and few other things in modern life — do. We are all familiar with what a friend terms “the dance of the departing guest,” during which someone stands at your door, randomly turning latches, pressing knobs, and shaking the doorknob, unable to exit until you finally walk over and let them out.

You’ll never see that at a screen door. If the knob even turns, it has only the simplest catch. Usually it doesn’t budge, and you grab something as basic as a little bulb and do nothing more taxing than gently push. If you must lock a screen door — a perfect absurdity since you can fight your way through it with a hangnail — you use a hook and eye. And even then someone usually pulls at the door to open it and accidentally rips the eye right out of the jamb.

The screen door represents lowered barriers, that summer feeling of not really wanting to be anywhere in particular. I lie on the porch couch, hoping to snooze. Not a chance — slap! I stand out in the yard, holding the sleeves of my T-shirt open to catch a whisper of breeze. Not enough — slap! I turn on the porch’s ceiling fans. Slap! Kids are home. Slap! Cat’s in. Slap! Cat’s out. Slap! We’re in. Slap! We’re out. Food on the grill; where are the condiments? Slap! Tablecloth; napkins; food’s done; friend stops by, beer is popped. Wham-pap-pap!

Things change, of course. Our front screen door commits the cardinal sin of not being wooden — not even aluminum — made, instead, of white vinyl. Yet its long coiled spring stretches and slaps shut with almost the same satisfaction as the wooden ones out back. Even the screens have converted to black fiberglass mesh, which gives and stretches in response to little hands, making the screens bulge and eventually need replacing with spline and one of those rollers. But even that’s part of the joy; how many other things in your house can you actually still repair yourself?

We have not spoken here of air conditioning, that great denier of climate, that awful destroyer of physical reality. We’ve taken as given here that to experience a breeze on a summer evening is a privilege, almost a requirement: you must know your yard, your neighbors, your planet. If yours is one of those homes with no screen doors, with windows that don’t open from one year to the next, you are right to feel excluded here. Your doors are ever shut, keeping out the cold in winter and the bugs in summer, the humming box next to your house playing a song of “keep out.” The air conditioner hums privacy; the screen door sings community. And it’s not going away.

The screen door is not destined to become just another piece of nostalgia. It comfortably responds to change. Taut and true with its turnbuckle in place, it swings freely, a perfectly partial boundary. Between inside and outside. Between present and past. Between open and closed.

You probably have your own story about screen doors. On some warm summer day, we’ll stop by to hear it. Anybody home?