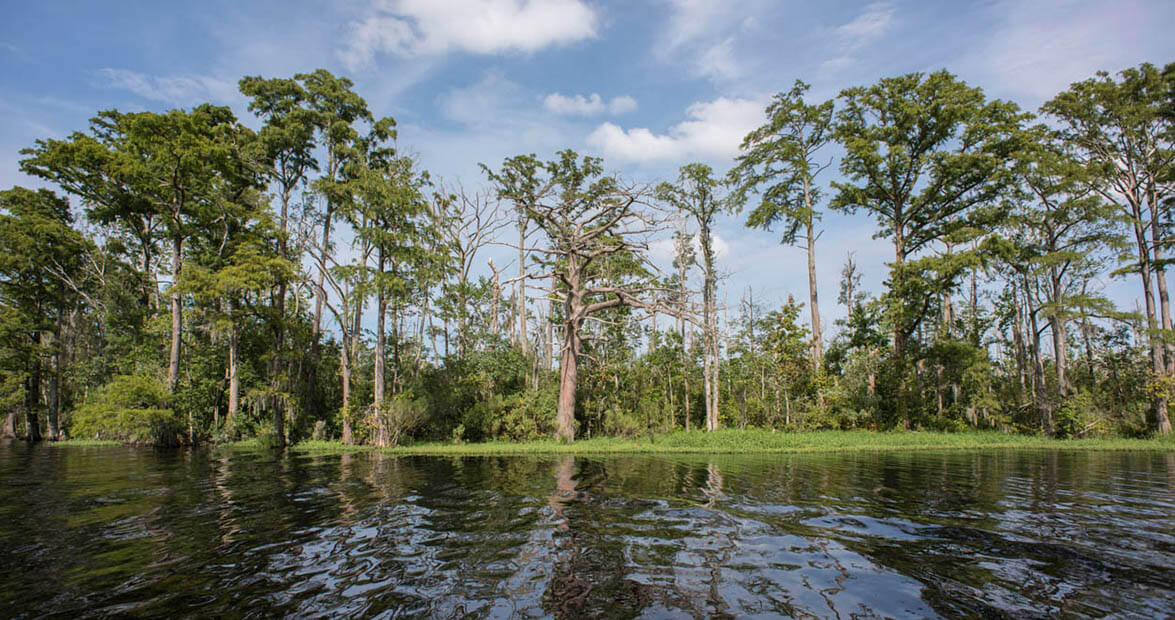 My people the Spruills first came into this south Albemarle country in the 1690s, when it had no name in their language. They called their bayside home Heart’s Delight, and they named the river that made their bay the Scuppernong. For this they borrowed the Algonkians’ askuponong (“where the sweet bay and swamp laurel grow”), a word spoken plainly and plainly spoken here for thousands of years before European or African or Asian ears ever heard it.

A couple of centuries later in the little riverport town of Columbia, just upstream of Heart’s Delight, my great-grandfather built a house for his family at the corner of Broad and Bridge. Twenty-three years after that, my grandmother walked right out of its front door and around the corner and met my grandfather smack in the middle of the little jail he was building for Tyrrell County.

Six weeks later, Evelyn Spruill and Julius Page were married in the parlor of that late-Victorian home, and then they were away.

The Columbia they left behind in late December 1909 had no boardwalk along the Scuppernong, nor any Pocosin Arts gallery and studio or museum or Center for the Sounds, all of which it does today.

Nor much quiet, either. 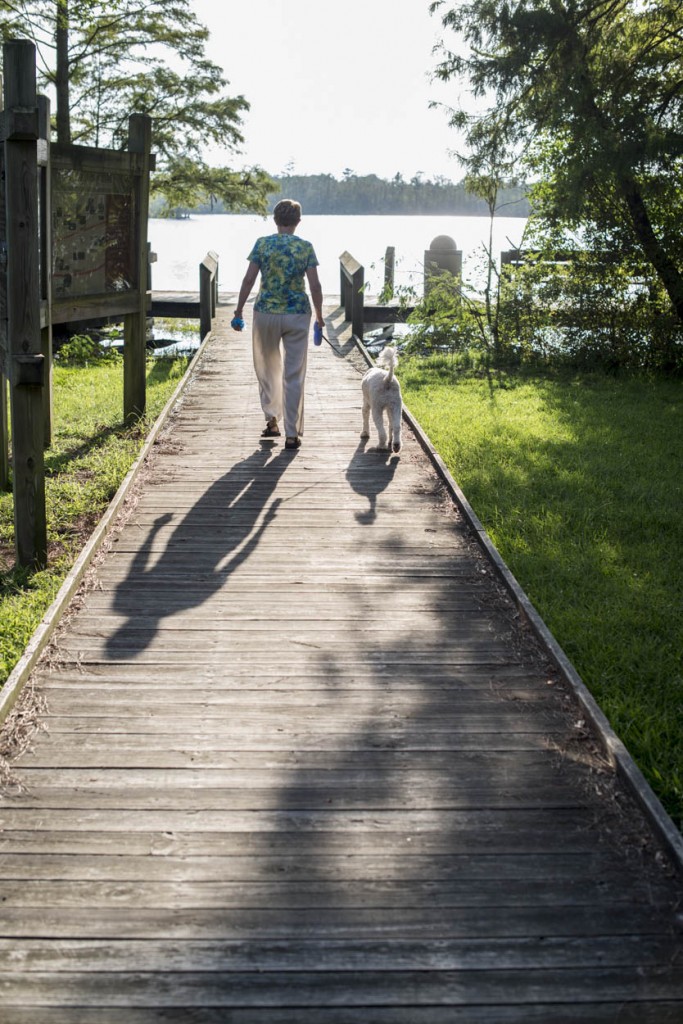 What mysteries lie beneath the waters of the Scuppernong River? There may be some things that only the cypresses will ever know. In the meantime, signs along the Scuppernong River Interpretive Boardwalk explain known features of the natural world. photograph by Lissa Gotwals

What it had back then was the massive riverside Branning Manufacturing Company’s lumber mill, and the railroad that Norfolk and Southern had just the year before run into town from Mackeys Ferry, and the whining of sawblades and planers and the whistling of boilers that ran it all. Less than a month after my grandparents’ wedding, the 112-foot Estelle Randall, a grand steamer fresh from the Potomac River trade, plied its way up the Scuppernong and docked at Columbia, her last time tying up lines. Before the next day dawned, she would catch fire, burn, and sink at the wharf.

Estelle Randall has not moved in over a hundred years.

When the state’s new drawbridge over the Scuppernong River opened in September 1926, it was feted by a parade, a barbecue, and dancing on the riverbanks. The bridge’s celebrants could not know that Branning Manufacturing had just about run its course in Tyrrell County, or that the railroad serving the lower Scuppernong would not outlast the mill by long.

No lumber-mill whistle has sounded out here for most of a century, and no train has called at Columbia since 1948.

Yet the wild territories of Tyrrell’s pocosins and the Scuppernong River abide, and the long boardwalk where the mill once was offers a quiet way, once again tying town and stream and swamp together.

Feather Phillips, the founder and longtime former director of Pocosin Arts, first led my wife, Ann, and me up the ferns-and-pansies-decorated wooden stairs to the Main Street gallery back in the 1990s, and it was a touching thing indeed to see, and handle, a curious old labor of love hanging on the wall there — an enormous woven lacy bedspread. So intricate was it, with its globes and radii, it seemed to be something from another world, a challenging code made by beings or even machines all but impossible to imagine.

Yet nothing so far-fetched was involved at all. Its creator was Mrs. G. N. Hurdle of Bridge Street, and the artifact itself was a yo-yo quilt made from feed sacks. 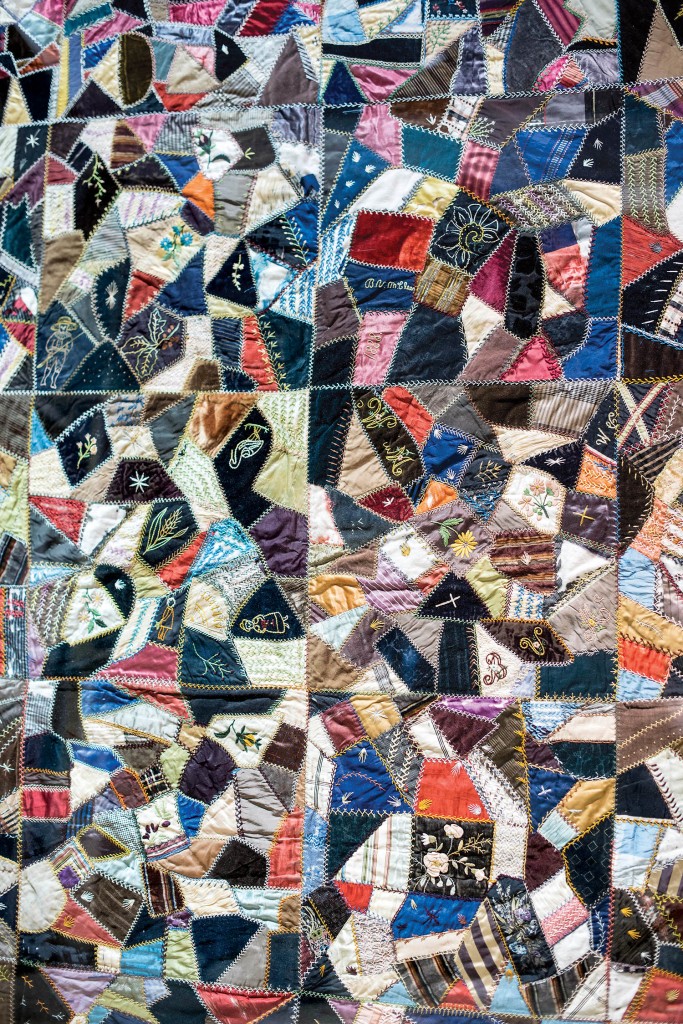 You won’t always find the story of a place in a book — sometimes, it’s written into artifacts, like the tapestry quilted by Bland Simpson’s great-great-aunt Buena Vista Spruill McLees, on display in the Columbia Museum. photograph by Lissa Gotwals

As Feather found and displayed such gorgeous, former commonplaces as this one, and others that though homely — like walking sticks fashioned from gum saplings spiral-designed by climbing vines — nonetheless touched the heart, she was also challenging her community and the whole pocosin region to bring forth its domestic arts, to put them together, and to see this colorful social collage of dolls and jugs and bedspreads as emblems of spirit and pride. She was trying, and in the long run succeeding, to get a small river town whose mill had closed down generations ago, whose train tracks had long since been taken up — events beyond the memory of most — to wake itself up and to wake up to itself and to love anew its many handiworks, and, of course, the hands and hearts that lay behind them.

Another quilter, my great-great-aunt Buena Vista Spruill McLees (named after her father’s ship Buena Vista) had spent hundreds of hours with scissors and threads and made a vaunted tapestry, an 8-foot-by-8-foot creation now in the Columbia Museum just up Main Street from Pocosin Arts. Her name — B.V. McLees — she stitched in gold on a black panel, adjacent to which 1888 lay in gold on pink satin. Aunt Buenie’s work was a crazy quilt with tiny red, black, gold, and brown panels in all sorts of geometric shapes, with embroidered icons of all manner of things upon the panels: a star, a leaf, a kite tail, a piece of wheat, daisies, a pelican, a cross, and a straw-hatted boy with a fishing pole.

It was more than important that Pocosin Arts be within sight and a few steps of the river — it was essential, for the river that we still fish in and float upon drains no small part of the great pocosins to the town’s south. The Scuppernong, the slow-moving, dark yet shining stream, flowed by below the gallery, then around a pair of bends, opening into Bull’s Bay and the Albemarle — and the river was why any of this, any of us, were here, the river as always in some good measure giving meaning to us all.